“Are we having fun yet?” asks our macro maven Jim Rickards. “A gold investor might well ask: ‘What’s the point?’

“When the dollar price of gold falls dramatically, say $100 per ounce — or more — in a very short period of time, [it] can give you a sick feeling in the pit of your stomach, like losing 1,000 feet of altitude in a jet in a matter of seconds,” he says.

“But what sets this most recent ‘smash’ apart is the rapidity of the drop at the end stage.

“Actual market prices were even worse than this summary indicates,” Jim adds.

“All of the prices cited above are daily closes,” he notes. “At times, the intraday trading levels were more extreme.

“When a normal price dip (say 1% in a trading day) arises, there are pre-programmed functions that take over. It’s important to bear in mind that the ‘price’ of gold is really driven by the reference price on the COMEX gold futures market.

“The volume of trading on COMEX can represent 100 times the amount of physical gold needed to cover the outstanding contracts,” says Jim. “Much of the gold trading on COMEX is done by computer using algorithms that are automated to trade based on technical levels, pre-programmed stop loss orders and momentum.

“Once gold dips below a certain level, the computers take over,” he says.

“Traders who are long futures will automatically sell futures to stop losses — a 1% dip is usually enough to trigger this stop loss trading in hedge funds.

“Other traders, who see the dip extending, will sell futures to take advantage of the momentum,” Jim says. “At this point, everyday traders (actual humans) will notice and might sell to cut their losses,” he says, “even if they’re not as quick as the automated systems that started the tumble.

“By day three, the losses make the headlines and those among the last to know may sell their gold ETFs, which adds even more downward pressure.

“Because these drawdown dynamics are both automated and technical,” says Jim, “they soon run their course.

“When the last long has closed out his position, when the momentum trader decides to take profits and when the weak hands have run for the hills, the downtrend stops as suddenly as it began.

“But nothing fundamental has really changed,” Jim says. “Gold is not like the stock market where stocks can go down 90%… or even to zero,” he says. “Once the low end of the range is hit, the gold price tends to go up again.”

“The recoveries are not necessarily as rapid as the dips,” Jim concedes, “but they are substantial and they are reliable.

“There is more good news buried in this technical analysis…

“The first is that gold is now at the tail end of a smash, meaning it’s likely poised for a nice rally from here. ‘Buy the dips’ is not a reliable strategy in stocks during a bear market, but it can work well in the gold market.

“The other bit of good news is that gold may resemble foreign exchange markets in terms of range-bound trading in the short run,” Jim says. “That’s good, because it puts a price floor under each dip.

“But in the long run, gold is not capped by the upside of a range,” he says. “That’s because gold is the only form of money not controlled by a central bank. This means that when central banks collectively resort to inflation (as they always do), gold is the last man standing.

“Any asset class that exhibits limited downside and unlimited upside deserves a place in your portfolio,” Jim says. “And that’s an apt description of gold.”

First, a peek at the year-to-date “returns” from the Big Six banks… 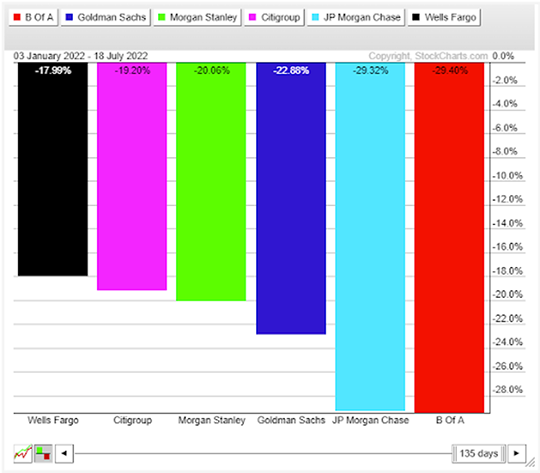 “Usually, banks profit from a widening of the net interest margin,” Sean notes. “That’s the difference between what they pay you in interest and what they make on their loans.

“But this time, that widening isn’t enough to compensate for the lost investment banking revenue. And that’s because companies are thinking twice about going public or financing deals.”

To wit: “The total value of U.S. initial public offerings was below $4 billion in the second quarter, down 97% from the record high in the first quarter of 2021,” reports The Wall Street Journal. “IPOs might not resume in earnest until business leaders have better insights on the outlook for inflation and economic growth.”

Sean concludes: “Sometimes, it takes the big guys to get hurt to see what’s truly going on. How they react to the Fed’s impending hike will dictate the Fed’s course for the rest of the year.”

Oops. From the embarrassing moments in financial media file… 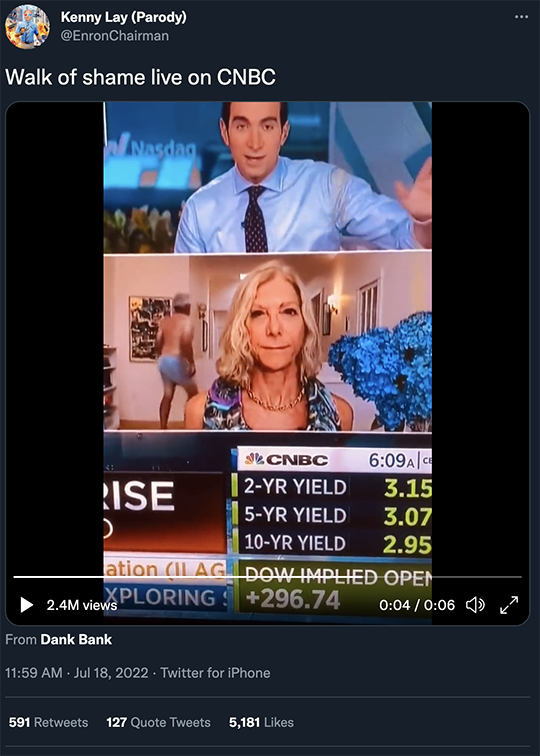 Is that a shower cap he’s wearing? Heh…

The lapses in judgment, given the current WFH environment, truly boggle the mind.

And for two major economic numbers, both involving real estate…

For more on Ethereum, we give the floor to our crypto evangelist James Altucher…

“I’m talking about the forthcoming Ethereum merge; after numerous delays, it looks like the merge will finally arrive later this year. 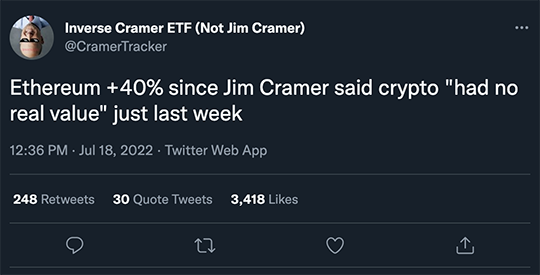 “At its core, the merge is a complete redesign of the way that the Ethereum blockchain is maintained and new Ethereum tokens are created.

“If you’re familiar at all with cryptocurrency mining,” James continues, “you probably already know that mining is an energy-intensive process that requires specialized computers.

“This mining process is known as proof of work. In proof of work, computers compete to solve a puzzle before any other computer on the network. The first computer to solve the puzzle receives a reward (called the block reward) for its effort.

“The puzzles are designed to be so hard that someone trying to [tamper] with the blockchain would require a massive amount… of energy in order to get away with it.

“However, in the coming months, the Ethereum blockchain will change the way mining occurs,” James explains. (But for flagship crypto Bitcoin? It’ll be business as usual.)

“This transition,” — the merge — “will replace proof-of-work mining with a new solution called proof of stake,” he says. “In short, proof of stake (PoS) works by having participants (called validators) put up a deposit to promise they are not lying.

“Based on the size of their deposit, each validator gets a corresponding vote on the true version of the latest blockchain record. [Validators] earn a yield on their deposit (or stake) to further incentivize them to participate.

“Because they are not burning energy — numerous studies have found that Ethereum will use 99% less energy after the merge — the cost for participating will be much lower.

First, because miners consume so much energy, many miners currently sell a portion of their Ethereum to cover their energy bills. “Some experts believe miners are responsible for nearly $10–⁠20 million in Ethereum sales every day.

“Some analysts believe this reduction in selling pressure could cause Ethereum to reach $6,000 within the next 12 months.” (Plus, investors reluctant to participate in crypto because of its environmental impact might get off the crypto sidelines.)

And then there’s inflation…

“The merge will actually make Ethereum deflationary,” James says. You read that correctly…

“Following the merge, experts forecast that Ethereum will be destroying more currency than is created to pay validators, meaning that approximately 1–⁠2% of all Ethereum tokens will be destroyed every year.”

So unlike the money-printing freaks at the Fed, “over time, this will serve to reduce the total supply of Ethereum,” says James, “and should also meaningfully improve the price from today’s current levels.

“Finally, the merge also sets the foundation for a faster, more powerful blockchain.” At present, Ethereum is only able to generate 10–⁠15 transactions per second, but post-merge, that number is expected to increase to 100,000 per second.

“All to say, Ethereum is about to undergo a monumental transition,” James summarizes.

“The stakes are high,” he concedes. “Pulling off a major system change on the second-largest blockchain in the world is a bit like changing an airplane engine midflight.

“But given the current investment environment in stocks and bonds, a deflationary cryptocurrency could renew interest in the asset as a store of value in an otherwise volatile market.

“Long term,” James says, “it’s hard to believe that Ethereum won’t be a great investment… With the merge right around the corner, I’m betting Ethereum could pay off big in the short term as well.”

The phrase “dead on your feet” has taken on new meaning in Japan.

A Tokyo office-furniture maker recently introduced its latest catalog offering — the Kamin Box. (No affiliation with the Segway’s inventor, Dean Kamen, by the way.)

It looks like a sleek storage locker on the outside, but inside, workers can take a power nap. Standing up… 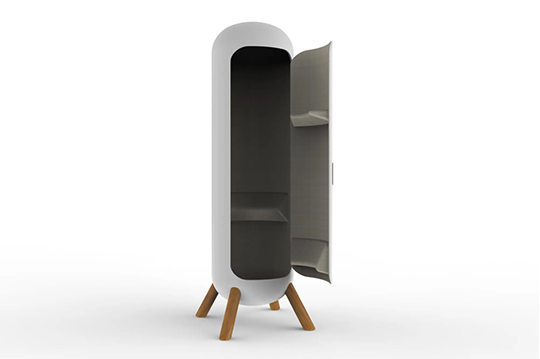 The Kamin Box (kamin means “joy” in English) supports “occupants’ heads, knees and rears so that they will not fall over,” says the New York Post.

“The designers hope the boxes will help address Japan’s strict office culture, which sees nearly one quarter of companies require employees to work more than 80 hours of overtime each month — often without extra pay — according to one 2016 government study.”

Perfect for quarantine too? Well, let’s not give the bastards any ideas…

“I’m sure that the gubmint will work to prevent it, but at least early on, if someone wanted to ‘go analog,’ they could construct a vehicle from various spare parts,” says a longtime reader about analog vehicles being a thing of the past.

“After the Wall came down in Germany, one could travel into the eastern part of the country and see all manner of ingenious vehicles cobbled together with parts from different cars, trucks and farm implements.”

The 5: Also brings to mind how Cubans manage to keep their ’57 DeSotos running to this day.

Take care… We’ll be back tomorrow!