[This might be a little inside baseball, but Dave messaged me yesterday: “OK, so your task tomorrow is to find the wackiest story about lockdowns in China.” And gosh darn, if I didn’t fit the spec!]

According to Shanghai newspaper Wenhui Bao, the latest government-sponsored charm offensive is meant to “tell epidemic stories, spread volunteer culture and [pass on] the traditional values of solidarity, friendship and mutual help.”

What kind of “heartwarming” responses are they expecting? Something like this?:

“Well, things got pretty dicey heading into month two of lockdowns. With deliveries of rancid meat and veggies, I was barely subsisting on 1,400 calories a day. And my only child came down with scurvy, requiring a three-day hospital stay. (See attached ‘heartwarming’ pic.) But at least we didn’t get the ’Rona! #Blessed”

But we get the feeling Shanghai can’t handle the truth. 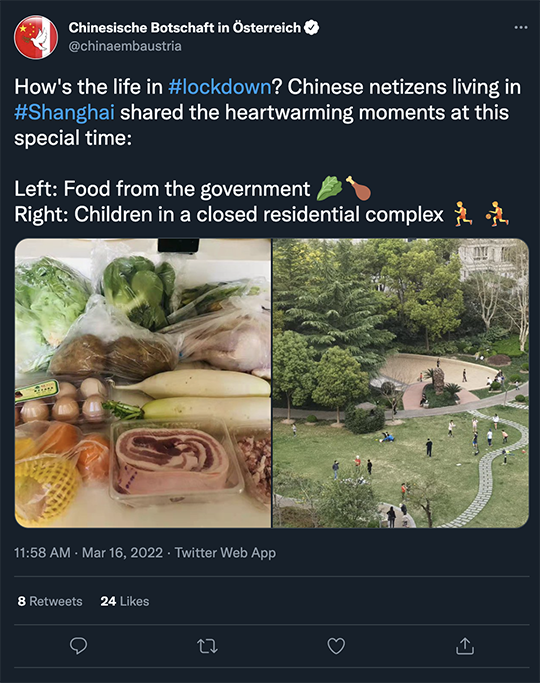 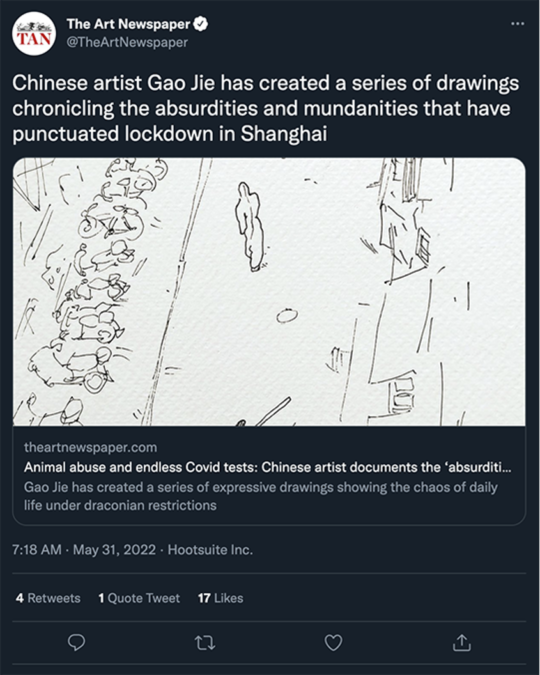 “I drew countless very absurd and extremely stupid things,” he says, mostly carried out by hazmat-wearing goon squads who, let’s just say, made things including solidarity, friendship and mutual help nigh impossible.

“I just hope that in 10 years, I can see a small dusty drawing on a small wall,” Gao says, “reminding me not to forget my current self peeping through the cracks of 2022. I hope I will never forget.”

(And we fear Mr. Gao will never be able to forget.)

“Shanghai was shut down for two months,” says our macro expert Jim Rickards, “and Beijing suffered partial shutdowns over the past month…

“In terms of productivity, that’s over 50 million people who have been effectively offline for months,” he says.

At the same time, he maintains: “China will never beat the COVID virus with lockdowns. There may be temporary relief, but the virus will go where it wants.”

Even Beijing seems to be coming around to this realization, evidenced by the latest policy lingo: dynamic zero-COVID. At the heart of this policy, according to China CDC Weekly, is “find one, end one.” (So, not ominous at all!)

Meaning? Find the infected person, “using new technologies like big data analysis,” in the “golden response time” before he can infect others. And send his contagious a** to the COVID gulag!

But back to the world’s second-largest economy, which is experiencing “temporary relief” too. “Chinese stocks have rallied” — more on that in a moment — “on each announcement that major cities are reopening for business,” Jim says.

“Yet this is really a series of false dawns.”

Instead, Jim believes Beijing is willing to sacrifice the Chinese economy in service of the CCP. Namely: “They are focused on the reappointment of Chairman Xi.

“For decades, China has had an orderly transition whereby each leader had two five-year terms with the next leader announced at the beginning of each chairman’s second term.

“Except Xi has broken the mold,” Jim says. “No successor was named five years ago, and the expectation is Xi will seek a third five-year term.

“This would make Xi… second only to Mao Zedong in the pantheon of leaders.” Jim says: “It’s a power move which will be ratified at the 20th National Party Congress, likely in November.

“It’s easy then to forecast Chinese policy,” says Jim. “Xi wants no demonstrations, no popular discontent and a steady diet of good news between now and November. The problem is reality isn’t cooperating…

Which brings us to Jim’s main point today…

“Chinese retail investors have far fewer options than U.S. investors,” he says. “They are limited to real estate, domestic stocks and gold.

“Gold, however, is expensive (and potentially hard to come by). Real estate has been in a bubble for decades… and is now in collapse. So effectively, everyday Chinese investors are limited to stocks.”

Which is more than a little concerning: The benchmark iShares China Large-Cap ETF (NYSE: FXI) tracks the performance of the 50 largest Chinese companies — with a combined market cap of $5.8 billion.

Looking at FXI shares over the last two years, Jim says, “a downward trend is unmistakable.” In fact, FXI shares are trading down almost 40% in 17 months. “And we expect that trend to continue.

“At the same time, stock markets in China are highly political and easily manipulated by the government,” Jim adds.

Plus? “The impact of Fed policy is scarcely confined to the U.S. It affects the world,” he says. “As the Federal Reserve continues to raise interest rates in the U.S., dollars are draining out of China in search of higher returns” — remember TINA, “there is no alternative”? — “putting more downward pressure on Chinese stocks.”

Jim concludes: “Beijing is too focused on the reappointment of Chairman Xi to an unprecedented third term,” he says. “Chinese leadership will destroy their economy in a foolhardy attempt to beat the COVID virus with lockdowns. Expect economic damage to continue unabated.”

In a nutshell? The country once poised to eat our lunch… is in dire straits.

Get used to it: For the next week and a half, Wall Street will keep trying to psych out the Federal Reserve — and markets will move accordingly.

The big economic number today is consumer sentiment as reckoned from a survey conducted regularly by the University of Michigan.

As Moneyball Economics chief Andrew Zatlin explained to us in May, this metric is meaningless. It’s based on a telephone survey of 400 people, tops.

But a month ago, Fed chair Jerome Powell told reporters that he and his fellow Fedheads pay close attention to this number. He said last month’s reading was “eye-catching” and a major factor in the Fed’s decision to raise short-term interest rates by three quarters of a percentage point and not just half.

The preliminary July number perked up from 50 to 51.1. But it’s the “inflation expectations” component of this report the Fed watches closely… and here, the survey shows people are less fearful of inflation than they were a month ago. (Uhh, gas prices have been falling lately, right? Wow, this is genius-level stuff…)

All of this matters — way more than it should — to what the Fed will do when it meets again in 12 more days.

On Wednesday, the red-hot June inflation number translated to a widespread expectation the Fed would jack up short-term interest rates by a full percentage point.

But with this consumer sentiment report today, the Wall Street consensus is back to three-quarters of a percent.

Yeah, this back-and-forth is gonna get really tiresome for the next week and a half…

So the prospect of “less tight” Fed policy is manifesting as a decent stock market rally here at week’s end.

Bonds are rallying alongside stocks, the yield on a 10-year Treasury now 2.92%.

Precious metals will probably end the week holding above critical support levels. Checking our screens, gold is at $1,707 and silver at $18.69.

Oil is rallying — up close to $3 at $98.51. As Joe Biden just landed in Saudi Arabia, Bloomberg is already reporting that he’ll leave “with no announcements on increasing oil supply before a scheduled meeting of producers next month.” But you kinda figured that already, right? We did.

➢ Other economic numbers: June retail sales surprised on the upside — especially if you factor out volatile auto sales and rising gas prices. But industrial production surprised on the downside, with manufacturing output falling 0.5% on the month.

For a limited time, you could “Eat the Rich.” If you’re into that…

The art collective MSCHF sold billionaire-lookalike popsicles, via food trucks, for $10 a pop in NYC and Santa Monica, Ca., earlier this week. 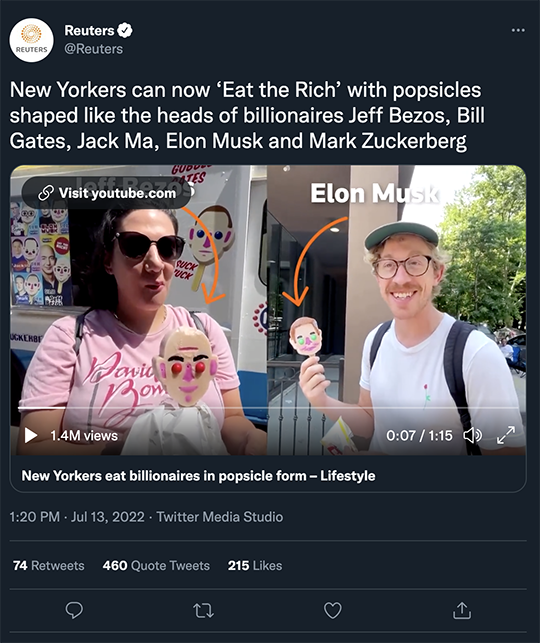 According to CBS: “The snacks… designed to start a conversation… have tongue-in-cheek names like Snack on Jack, Bite Bezos, Gobble Gates, Suck Zuck and Munch Musk.” (The less said about that, the better.)

“You know with the chip shortage, I often wonder why automakers don’t go back to making cars without all the computerized stuff,” a reader says per our BMW subscription “service” discussion.

“Vehicles would be cheaper and there would be less control over movement. But then, that is exactly why they want the computer chips in vehicles! I wish a car company would come out with a vehicle that was ‘safe’ from surveillance — I would buy that one.

“Oh, and we wouldn’t need to go to ‘green’ vehicles if they hadn’t suppressed knowledge to increase fuel economy. Green energy is only going to destroy our life as we know it by taking down our power grid and causing all sorts of other problems. It is not sustainable, no matter what they say.”

We think the analog vehicle (with the exception of classic cars) is a thing of the past, and the surveillance-mobile is becoming a reality.

Get this: Last week, the EU passed the “intelligent speed assistance program” which requires all automakers to install anti-speeding technology. How does it work? It varies by system, but one will flash a dashboard warning, another will cue an automated voice warning and the most aggressive system “will produce a vibration throughout the driver’s cockpit,” says Autoweek.

Not intrusive at all…

Try to have a good weekend. And check out Saturday’s highlight issue of The 5 — even more government insanity!