“It’s likely that there will be considerably more pain before this is finished,” says legendary British investor Jeremy Grantham per the stock market this year.

We’ve been keeping tabs on Grantham’s periodic media appearances for several years now, seeing as he’s one of the few people who’s accurately “called the top” of one bull market after another.

He bailed from Japanese stocks just as they were crashing in 1990. He anticipated the dot-com meltdown in 2000. He was among the lonesome voices — along with our own firm — who said the mid-2000s housing bubble would come to a disastrous end.

And today, Mr. Grantham is pushing against the bear-market-is-over narrative.

“If Grantham… is right,” Fortune says, “it means the S&P 500 has another 25% drop ahead of it from current levels.” Which jibes with what’s happened after two mid-recession “relief rallies” in the U.S…. 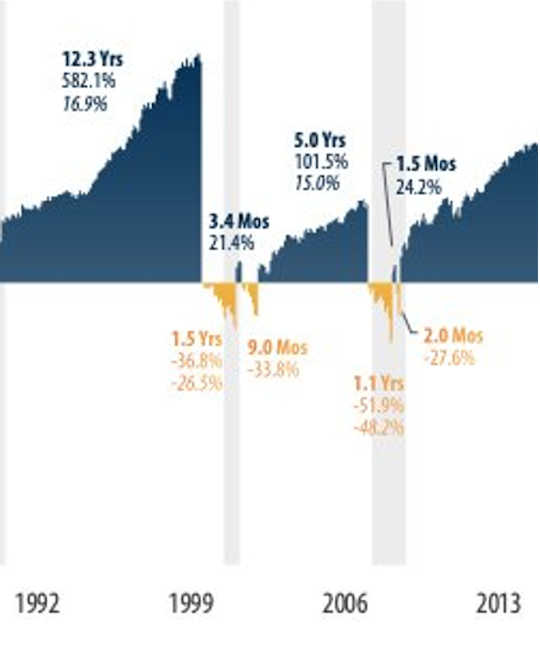 But both “relief rallies” were followed by cliff dives, averaging over 30%… So a 25% drop might be on the conservative side?

“There is absolutely nothing to stop the market from going below fair value,” says Grantham. “It’s certainly entitled to spend several months below 3,000.”

Since last year, Grantham has been calling attention to the bull market’s finale, underscoring a “superbubble” that includes a miasma of risky assets, U.S. stocks and housing.

“We have been through one of the great speculative periods” — spurred by stimulus programs and dovish monetary policy — and (voilà!) it created “a perfect environment for speculating,” he says. “That kind of [speculative] investing has always turned out to be, for most people, incredibly expensive.”

But hey, if you’ve got 30 more years to invest?

“You should welcome lower prices because the compounding effect will be greater than the pain on your portfolio,” Grantham says. “The younger you are, the more you should welcome a market decline.” (Conversely, the older you are… Well, you get the point.)

As for the arrival — and duration — of the market’s second-leg downturn, he declines to guesstimate. “You can’t really know if it’s going to be quick or long,” he says.

“What is guaranteed,” Fortune concludes, “in Grantham’s view, is that corporate earnings will fall as recession fears and interest rates rise, leading stocks to take a hit.”

If you’ve been following Jim Rickards’ work this year, then you know he agrees with Mr. Grantham’s estimation: A day of catastrophic reckoning is heading for the U.S. stock market.

And soon millions of Americans are going to be feeling the pain.

Reporting on the crypto market, Bitcoin’s rally has been interrupted; at the time of writing, the crypto is down $90, just under $23,000. But Ethereum is standing pat at $1,565.

For the economic number of the day, we have the composite “flash PMI” for July — which faltered bigly to 47.5 (yeah, contraction territory) from June’s 52.3 reading. “The rate of decline was the sharpest since the initial stages of the pandemic in May 2020,” Trading Economics notes.

Although the manufacturing PMI registered at 52.3, barely beating consensus estimates, the service PMI shrank to 47, woefully below the 52.6 economists anticipated. “Looking ahead, service providers signaled the lowest degree of confidence in the outlook for output,” Trading Economics says, “since September 2020.”

Mr. Pelosi is at it again… We’ve mentioned Paul Pelosi’s enviable stock-trading track record a time or two at The 5, including when the Pelosis’ wealth grew by an estimated $16.7 million in 2020 alone.

And late last year, Jacobin magazine reported: “Since 2020, [Nancy Pelosi] and her husband… traded over $50 million in assets, with annualized returns at 69% as of October.” Noice. 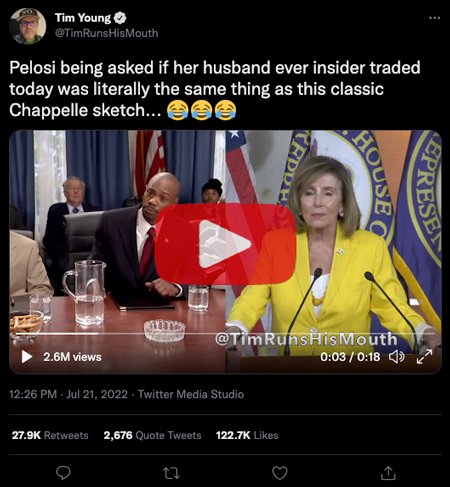 Legendary “Mr. Big Short” investor Michael Burry, for one, isn’t buying it. “So @SpeakerPelosi made a bundle on semiconductor stocks bought recently,” Burry tweeted. “Because she knew this was coming. Should be illegal.”

Um, what conflict of interest?

“Congress is slated to vote on a $52 billion subsidy to the industry as part of a bill” — the CHIPS Act (ugh) — “to increase U.S. manufacturing of computer chips to make the country less reliant on and more competitive with China,” Fox Business says.

Of course, a little over a week ago, our science-and-tech authority Ray Blanco — in something of a hot take — said he expected semiconductor stocks to bounce meaningfully. So Pelosi might not be too out of bounds?

Supply-chain snag of the day: “Owner-operator truck drivers, who make up 90% of the [Port of Oakland’s] operation, have been protesting outside the port since Monday,” says a CBS affiliate in San Francisco. 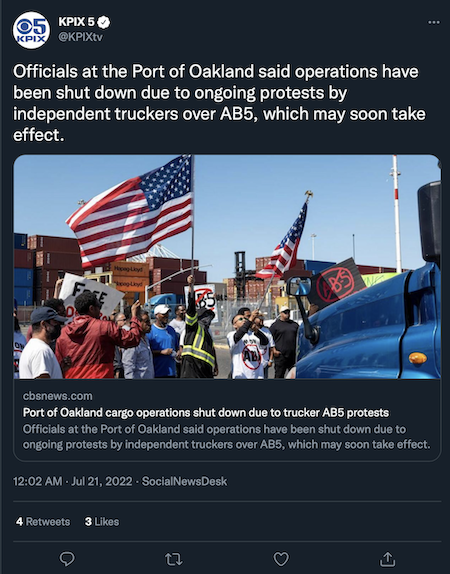 According to Reason: It’s “a terrible labor law that may require [independent truckers] to become employees of trucking companies — regardless of whether they want these jobs.”

The California Trucking Association, in fact, filed a lawsuit claiming the state law violated federal law. And though the courts initially sided with the truckers, exempting them from AB5 for a period of time, a federal circuit court of appeals reversed the decision last year.

Now about 70,000 owner-operator California truckers are about to suffer the consequences of AB5, “a law passed in 2019 that controls and severely restricts who can work as independent contractors within the state.”

Though advocates of AB5 believe the law is meant to safeguard independent contractors from “predatory” companies who want to skirt providing benefits and overtime pay, “it [has been] a massive disaster for people who genuinely wanted to work as private contractors and be their own bosses,” says Reason.

“You know, we’re trying to stop the port’s operation so that we can get our point across and cancel that AB5 law,” says protester Randeep Dhillon.

“We’re gonna be out here until Sacramento gives us an answer about this law,” he says.

But Team Newsom, so far, has been unyielding; the governor’s “GO-Biz” Director Dee Dee Myers says: “It’s time to move forward, comply with the law and work together to create a fairer and more sustainable industry for all.”

In other words — to mix metaphors — the train has left the station, according to Newsom, and these truckers either get on board or risk dying on the tracks… Americans should brace for impact too, as inflation, labor issues and this latest West Coast supply-chain snarl will amp up prices of consumer goods.

We’ll stay on top of this story…

[Great moments in litigation] A bar patron is suing for unspecified damages after she suffered a severe hand injury on the bar’s premises. Seems reasonable enough…

Until you learn the injured patron visited the Break Bar NYC where, according to the bar’s website: “When you are done with your shot, pint or wine… you smash the glass.” 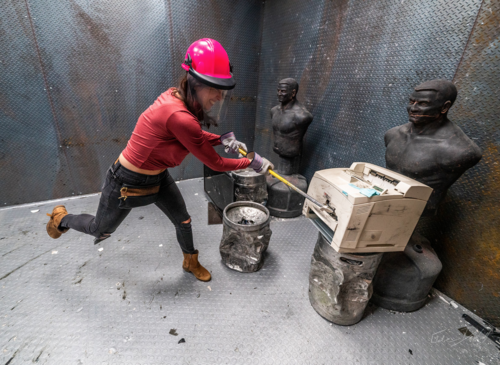 Yep, the Break Bar is part of the “rage room” phenomenon where people pay. To break sh*t.

Ms. Annaleigh Robbins-Sennewald, along with a group of friends, shelled out $169.99 for a 30-minute sesh.

Donning boots, helmet and “basically gardening gloves,” she recalls: “Within the first 10 minutes, one of my friends threw up a glass and another hit it with a crowbar, and the shard kind of flew at me.

“I put my hand up to protect myself,” she says, “and it went through my protective glove and severed my tendon.”

As the New York Post puts it, er, inelegantly: “Drunk, Robbins-Sennewald said the impact of the injury wasn’t immediately clear to her, so she stood back during the rest of the session.” But when she sobered up, she asked bar employees for a first-aid kit; instead, she says she was offered burn cream and a bandage.

Eventually, Robbins-Sennewald had to undergo surgery and six months of physical therapy.

Not sure what the Break Bar’s lawyer has to say about the lawsuit, other than… you break it, you buy it?

Oh, by the way, I have a menagerie of outdated electronics taking up space in my garage in case the Break Bar is interested. (Use, reuse, recycle.)

You all have a great weekend. And for heaven’s sake, stay out of the “rage room”!