The Calm Before the Market Storm

Complacency, thy name is The Wall Street Journal… 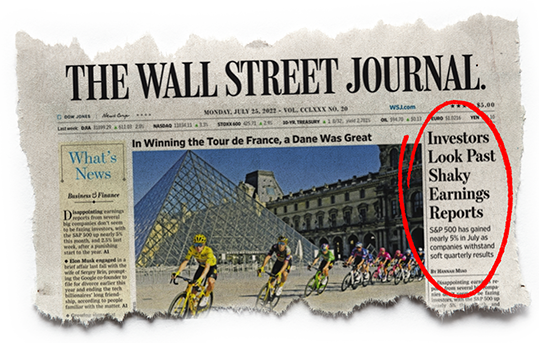 “After a punishing start to the year, the S&P 500 has climbed nearly 5% in July, including last week’s 2.5% rise. Even some companies that have posted sharply lower quarterly results have seen their shares rally in the following days.”

Which is true, as far as it goes. In recent days, we’ve even mentioned most of the examples the Journal cites — Bank of America, Netflix, Tesla.

But will that continue to be the story as we get into the meat of earnings season?

Of all the S&P 500 companies, 175 will report their numbers this week. That includes 12 of the 30 companies in the Dow industrials. 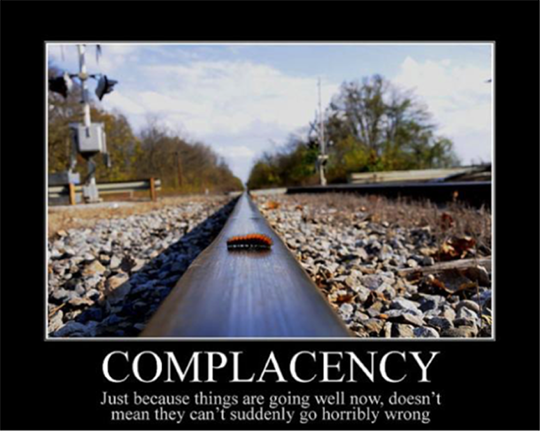 Back then, the markets and the media were complacent about the “Brexit” referendum in the United Kingdom. No way, they thought, would a majority of voters opt to leave the European Union.

Our macro maven Jim Rickards spotted that complacency and pounced on it. When a majority did vote to leave the EU, the market shock netted his readers a 129% gain in three days.

Now we’re not going to promise gains of that speed today. But given the trouble Jim sees shaping up in the market right now… we do promise the potential for gains of at least that magnitude, if not much more. (Jim revealed the whole story last night during his exclusive “4th Horseman Summit” — you can click here for instant access to the replay.)

SNAP’s second-quarter numbers came in less than expected — which maybe the Street could forgive, as it did with Netflix and Tesla. What the Street could not forgive was the company’s refusal to offer guidance for the current quarter. SNAP shares collapsed 39% Friday.

Another member of our team, value specialist Zach Scheidt, offers a plain-English translation: We don’t know what the @#$@#$ is going on!

“SNAP’s lack of guidance speaks volumes about where our economy is right now,” Zach warns.

“Remember, SNAP’s true customers are not the users who post pictures or record silly videos. Their customers are actually corporations who spend money on ads and sponsorships.

“So if SNAP’s management team is having difficulty determining what these corporations are going to spend, we need to pay attention to what this means.

“Advertising budgets are important for businesses. That’s because when a company spends on ads, it expects to get more revenue in return. But many times when a recession hits, businesses cut spending to keep from losing money.”

That may or may not be a wise decision. The history of corporate America is littered with companies that foolishly cut their ad buys during a downturn… and lost ground to competitors that maintained robust ad spending. (That’s how Kellogg’s came to dominate breakfast cereal for much of the 20th century; Post dialed back its advertising during the Great Depression.)

Our point today is that if SNAP sees a cloudy future for digital advertising… what does that say about the prospects of Google parent Alphabet, which reports tomorrow? Or Facebook parent Meta, which reports Wednesday? Or Amazon, which reports Thursday and is more dependent on ad revenue than you might think?

The market caps of those three companies comprise 9% of the entire S&P 500.

If their numbers disappoint… or if they “guide lower” on ad revenue for the current quarter… well, that would knock the complacency out of Wall Street and the financial media in a hurry.

And there’s an even stiffer headwind facing the market this week, as Jim Rickards explained last night so urgently in his “4th Horseman Summit.”

“With one of the greatest financial shocks since the Great Depression due to hit,” he says, “you can’t afford NOT to review my findings.

“You can either choose to make more money than you thought possible during a crisis — or get completely crushed in the markets.”

You can review Jim’s findings at this link, spelling out the strange pattern that’s preceded nearly every market crash since 1919… and how to take advantage.

Bond rates are inching higher, the 10-year Treasury at 2.81%. The yield curve is becoming ever-more inverted as even the 6-month T-bill now delivers a higher yield of 2.95%. As a reminder, an inverted yield curve has a strong history of anticipating recessions.

At minus 0.04, however, the number suggests only that the economy is holding its own — in the same so-so zone it spent much of the 2010s.

It’s not outside the realm of possibility, says our resident oil field geologist Byron King — not in light of the American experience in the inflationary 1970s.

“The next big price move came in 1979–80, via the Iran Revolution, when oil shot up from the mid-teens to about $36.00 per barrel. It was easily more than a double move (and just shy of a triple, depending on where you want to set the baseline).”

So a quadruple, followed a few years later by a triple.

But now even the likes of Goldman Sachs and Bank of America are issuing reports suggesting that if events break just the wrong way, oil could go from the present $100 or so to as much as $200 or even $300.

Yes, the price will pull back if a recession sets in. But once the recession is over?

Well, the mainstream is tumbling to the fact that Saudi Arabia’s vaunted “spare capacity” isn’t as advertised… 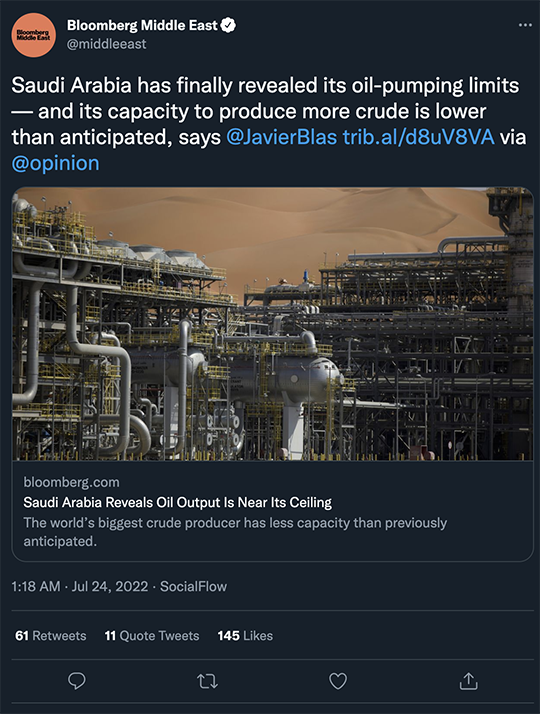 For the entire 15 years this e-letter has been publishing, we’ve been suspicious about Saudi Arabia’s claims that it can open the spigots wide with a snap of the fingers. We started sounding the alarm anew in early June.

Now after Joe Biden’s meeting with the Saudi princes a few days ago, Bloomberg energy columnist Javier Blas — a rare mainstream writer for whom we have respect — is giving the rest of the mainstream permission to say the same.

Saudi Arabia’s hypothetical peak production level is “a lot lower than many anticipated,” Blas writes. “It’s lower than the Saudis have ever intimated. And with the world still hungry for fossil fuels, it spells long-term trouble for the global economy.”

Crown Prince Mohammed bin Salman said so after meeting with Biden: To meet growing global demand in years to come, “the kingdom will do its part in this regard, as it announced an increase in its production capacity to 13 million barrels per day, after which the kingdom will not have any additional capacity to increase production.”

As Blas reminds us, “back in 2004 and 2005, during Riyadh’s last big expansion, the kingdom made plans to expand its pumping capacity to 15 million if needed. And there was no suggestion that even that elevated level was an upper limit.”

Now, however, it can be told: “If money isn’t the constraint, then it must be geology.”

Which is exactly what renegades like investment banker Matt Simmons were saying during that 2004–05 timeframe.

Blas again: “If the obstacle to boosting production is geology, rather than pessimism about future oil demand, the world faces a rocky period if consumption turns to be stronger than currently expected.”

Which it is: “Despite widespread talk about peak oil demand, the truth is that, for now at least, consumption keeps growing.”

After Jim Rickards shared his thoughts about the moribund gold price last week, we heard from a couple of readers…

“I think gold and silver are going to experience a resurgence in purpose and a new black market will quickly form,” one writes.

“Also, ‘Goldbacks’ may really take off to not only include other states but usage throughout the country. I welcome the day. A new challenge for the Fed. I think the country is ready to send them packing.”

“Dave, the tipping point for gold will be when it’s plain to see the central banks want the inflation and won’t and obviously can’t use interest rates to combat it.

“I would say at that point, gold will take off like a rocket and overrun the paper gold.

“I would say further that none of this has been lost on Russia and they have it all planned out with support from China, the latter when China has sufficient official and unofficial ‘people’s gold.’

“Right now, it’s just another shakeout of the gold equities that continue to run according to the paper-gold quotes.”

The 5: If you’re really bold, now’s the time to start looking at the gold stocks again. The HUI index is back below 200 for the first time in three years, not counting the spring 2020 COVID-crash.

Then again, if gold breaks below that critical technical support at $1,680, the gold stocks could become a slaughterhouse…