For the first time in 12 years, China’s portfolio of U.S. government debt has collapsed below $1 trillion.

According to Treasury Department data, China’s U.S. Treasuries holdings total $980.8 billion (as of May), representing a 9% drop from the same time last year. As it happens, Japan is now numero uno when it comes to foreign holders of U.S. debt… 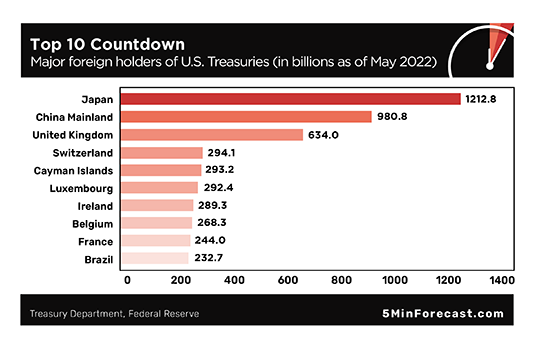 “The debt decline comes as the U.S. Federal Reserve has been raising rates to stop inflation running at its fastest rate since 1981,” CNBC says. “When rates rise on bonds, prices drop, meaning a capital loss for investors who sell the bonds ahead of maturity.”

That’s certainly one explanation, but our macroeconomics authority Jim Rickards has another…

“Why the decline of almost $100 billion in the past year?” Jim posits.

“The popular explanation is that China is dumping U.S. Treasuries in order to reduce its dependence on the U.S. dollar and U.S. Treasury debt in particular,” he says.

“This explanation has some plausibility based on the fact that the U.S. has frozen the Treasury assets of the Central Bank of Russia in retaliation for its invasion of Ukraine.

“It’s entirely possible that China has watched what happened to Russia and decided to make itself less vulnerable by reducing its Treasury position.

“It’s not even necessary to dump Treasuries on the market,” says Jim. “Beijing can just wait patiently until holdings mature.

“China will just get the proceeds with no further action,” he says. “As long as China doesn’t roll over the proceeds into new Treasuries, then their U.S. Treasuries position decreases.

“Beijing can then choose to invest that cash in German or Japanese bonds or any other asset class they wish,” he says. (Umm… gold?) “But there’s another explanation for the portfolio shrinkage that is far more troubling.

“China may be in the early stages of a liquidity crisis,” Jim adds, and recent events bear that out.

A run on banks in the central province of Henan “began in April after local police opened an investigation,” accusing a crime syndicate of defrauding four rural banks “by falsifying loans and illegally transferring funds,” according to a Financial Times article.

Officials immediately froze the equivalent of $5.9 billion spread among the four banks, meaning depositors were unable to withdraw funds. Moreover, it was unclear whether China’s deposit insurance system — think FDIC in the U.S. — would cover the defrauded deposits.

Thus began a standoff outside banks in Henan, culminating in violent protests on July 10 when regulators finally promised to reimburse stolen funds. In installments…

“But wider damage had already been done,” says FT. (And you can’t say we didn’t see this coming.) “Local officials manipulated the personal health apps of more than 1,000 depositors to imply that they were at high risk of COVID-19 and prevent them from protesting… 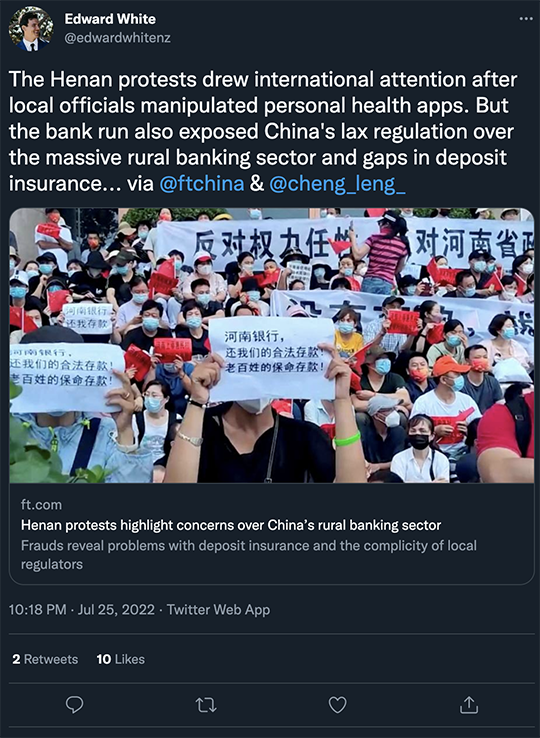 “The problems at rural banks, although not regarded as a systemic financial risk in themselves, have heaped more pressure on an economy reeling from COVID-19, a years-long property downturn and a broader slowdown in growth,” FT concludes.

But buried deep in the article, we find this: “Beijing is accelerating the issuance of special local government bonds to inject capital into smaller banks.”

Yeah, nothing to see here…

“The reduction of China’s Treasury securities position, far from being a sign of simply walking away from dollars, might be a sign of acute weakness… with China desperately trying to raise dollars any way they can.

“My estimate is that the decline in China’s Treasury portfolio is an indication of financial distress rather than financial autonomy,” Jim notes.

“That could presage a global liquidity crisis,” Jim closes. “China may turn out to be a very large canary in a coal mine… We’ll soon find out.”

With earnings season now in full swing, the day’s figures are a mixed bag — good for Coca-Cola and McDonald’s, not so good for General Motors. GM continues to wrestle with supply-chain snags.

➢ But the ugly corporate news comes from Walmart, which “guided lower” for its earnings numbers due in three more weeks. Wally World says consumers are seriously feeling the pinch of high food and fuel prices… so it’s slashing prices on backed-up inventory of the stuff people don’t need right away, especially apparel. WMT shares are down 8.5% on the day.

In general, markets are in suspended animation as the Federal Reserve gets underway with its two-day policy-setting meeting. In all likelihood, the Fed will jack up short-term interest rates another three-quarters of a percentage point to just over 2.25%.

There’s a raft of medium-impact economic numbers today. The one that stands out to us is new home sales — which tanked 8.1% in May, way more than expected. The median price of new construction fell 9.5% to $402,400. Inventory for new construction is up to 9.3 months — the highest since May 2010. (In contrast, existing-home inventory remains tight at only three months.)

But the high-impact economic number this week is the second-quarter GDP number due Thursday. The White House is already in damage-control mode… 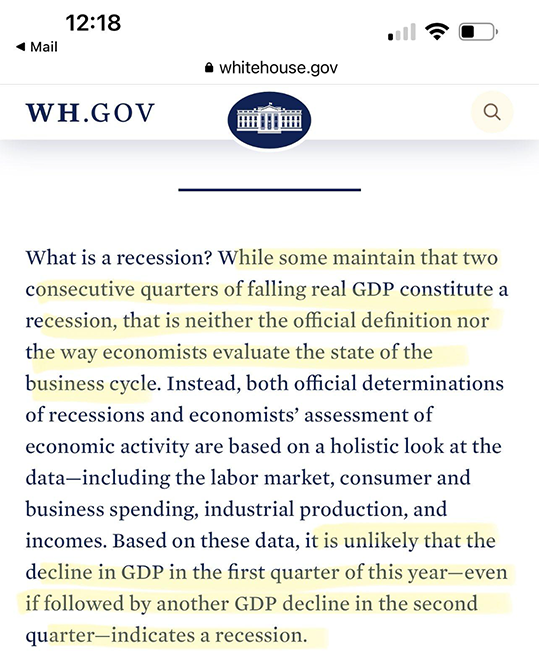 We won’t spill a lot of digital ink today on the definition of a “recession.” But we will warn you to brace yourself for a whole lot of media screeching about it tomorrow and Thursday. We’ll be here to help cut through the noise.

A reader draws our attention to the topic of “Sweden and the pitfalls of a cashless society.” And near as we can tell, this might be The 5’s first mention of the Scandy paradise and its war on cash.

In terms of a timeline, it all started in the 1970s when cash volumes were increasing in many “advanced” economies, but simultaneously decreasing in Sweden.

According to PYMNTS.com, Swedes quickly adopted “the mobile payment system,” and it’s now “used by 95% of all Swedish adults.” Meanwhile, “the number of people who reported using cash as their most recent payment method fell from 39% to 9% between 2010 and 2020.”

Some analysts even predict Sweden — which was the first European country to issue bank notes in 1661 — might go fully digital by 2023. The transition to a cashless society, however, didn’t happen overnight… nor did it happen without meticulous strategizing.

“The fact that consumers are so willing to embrace change when it comes to payments is no accident, and in fact has been ushered in by progressive legislation on the [Swedish] government’s part,” says tech firm Global Processing Services.

“Throughout the retail and hospitality sectors, it’s not uncommon to see ‘card only’ or ‘cash-free’ signs at point of sale.

“This is thanks to a law that gives merchants the right to only offer digital payment options, despite cash still being recognized as legal tender.”

So back to the pitfalls our reader pointed out? Namely, how Sweden’s commitment to ‘cash free’ commerce affects “lower-income workers, rural communities and migrants,” concedes Global Processing Services.

“Although Swish can be linked to bank accounts with 12 of Sweden’s largest banks, it’s not possible to connect it to a foreign account,” says Sweden’s English-language outlet The Local.

But Karen, a U.K. expat living in Sweden, notes: “It’s great to see street vendors and market traders embracing mobile payments in a way you don’t see in the United Kingdom, but I do worry for the exclusion of the elderly.”

Mighty nice of her… But there is a surfeit of other implications.

As an American — using the handle Lawrence-26 — pointed out in the comments section of The Local article.

“I recently was [in Sweden] this past April and found the cashless store purchases awkward and stupid,” he says. “I can also tell you that the backlash against the cashless system is beginning in the U.S. because of the negatives associated with it. Let me explain…

“Towns and cities in the U.S. are considering ordinances forbidding cashless stores… since some people are not qualified to obtain credit cards (poor people, homeless people… pensioners with low incomes, etc.), [and] so have become powerless to make purchases.”

To say nothing of internet outages: “There are increasing incidents of power disruptions in the U.S.,” he adds. “Just yesterday, in my town in Connecticut, Bank of America had to close its branch downtown because its system crashed… They even closed the brick-and-mortar branch in the afternoon for hours until it was fixed.

“My personal opinion: I am against [going] cashless. I want control over my money.”

Heh… Lawrence-26 sounds like one of our tribe, right?

You all take care, and we’ll be back with more tomorrow!

It costs less than $100 to get into, it’s easy to execute and it could mean an 11X return or more during a market crash. And the timing couldn’t be better to make money in a falling market.

That’s why we suggest you watch Jim’s message now, before the markets close today.

With the state of the market today, you don’t want to miss out on your shot to take home a huge win during a market crash. Click here to view the rebroadcast of Sunday’s message.]