“All the talk right now is about recession,” says our macro authority Jim Rickards. “Are we in one right now?”

Despite Team Biden’s arm twisting this week, the “R word” appears to be a reality. But Jim takes it one step further: “The New Great Depression is upon us,” he says, even publishing a book on the subject in 2021… 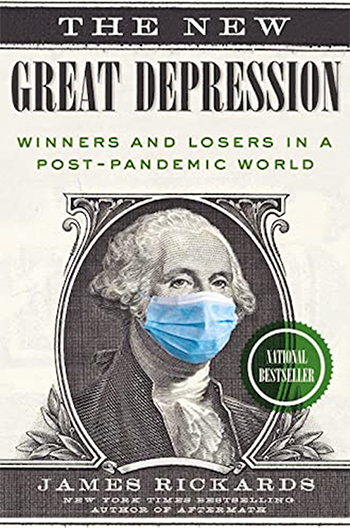 Nevertheless, an adequate definition of an economic depression remains elusive…

As Jim notes: “The word ‘depression’ does not have an exact mathematical definition,” he says, which is a major economic blind spot.

Personally? I like the definition attributed to President Truman… 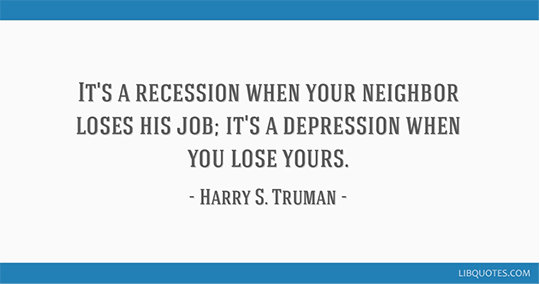 Alongside an inexact definition, Jim says, there’s this: “No one under the age of 80 has ever experienced the Great Depression…

“Where are the soup lines? Where’s the 25% unemployment rate?”

[As a person who herself is under the age of 80, I reached out to my parents via text yesterday, asking: “Do either of you remember stories your parents or grandparents told you about living through the Great Depression?”

According to Jim: “The best definition of a depression ever came from John Maynard Keynes in his 1936 classic The General Theory of Employment, Interest and Money.”

Per Keynes then, depression is “a chronic condition of subnormal activity for a considerable period without any marked tendency either toward recovery or toward complete collapse.”

Today? “Since a depression is understood to be something worse than a recession,” says Jim, “investors think it must mean an extra-long period of [contraction],” marked by “a continuous decline in GDP.”

Not necessarily, he says, especially given the Great Depression (1929–1940) technically consisted of two periods of recession as well as two periods of economic expansion — from 1933–1936 and, again, from 1939–1940. “But the Depression continued because the U.S. did not return to its potential growth rate until 1941,” Jim says.

“The long-term growth trend for U.S. GDP is about 3%,” he adds. There have been a few outliers, including 4% and 5.5% growth during the Clinton and Reagan administrations respectively. (And the 10% GDP growth in 2021? Fake news, considering the ultra-low post-pandemic baseline.)

“By contrast, growth in the U.S. from 2007–2013 averaged 1% per year. Growth up until 2020 was only marginally higher,” says Jim. “You could say the severe pandemic-inspired recession of 2020 was a unique outlier, but growth for the preceding decade was below the long-term trend.

“I’ve maintained that the United States has been living through a New Great Depression that began in 2007,” Jim says. However, “calling the current economic malaise a depression comes as a surprise to most investors.”

Indeed… What about the longest bull market in history? As we’ve mentioned more than once at The 5, the stock market is essentially divorced from the real economy. (And, it must be said, Wall Street is an abstraction to the 42% of Americans who do not own stocks.)

“But investors have been told that the economy is in a recovery that started in 2009,” Jim says, which “was disrupted by COVID in 2020, and that we’re back on the road to growth after the lockdowns ended.” Not so…

“Again, it isn’t necessarily negative growth, but below-trend growth,” he reiterates. “The past decade-plus of sub-2% growth — when the historical growth is 3% — is a depression exactly as Keynes defined it.”

Perhaps most disturbing: “There’s no end in sight to the New Great Depression,” says Jim. “Growth never seems to get traction… There are some signs of growth, and then the economy quickly slips back into low-growth or no-growth mode.

“This New Great Depression will continue indefinitely,” Jim concludes, “unless policy changes are made in the years ahead.”

A deteriorating macro backdrop notwithstanding, July 2022 is shaping up to be the stock market’s strongest month since November 2020.

The ever-volatile oil price is up nearly $5, a barrel of West Texas Intermediate back above $101.

What does all this mean for further Fed “tightening”? The trade in fed funds futures this morning suggests only a 29% probability of another three-quarters percentage point increase at the next Fed meeting on Sept. 21. Right now, a half point is more likely.

“This is the action the American people have been waiting for,” says Biden regarding the oh-so-ironically-named Inflation Reduction Act of 2022… which will cost taxpayers $433 billion. 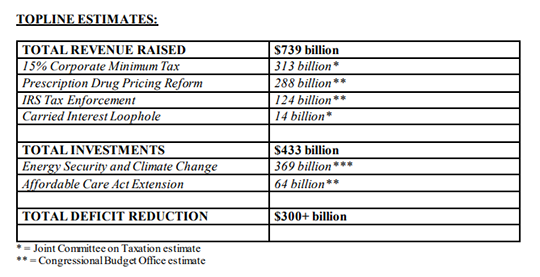 Hidden among the “investments” is a provision to expand the number of IRS agents, actually “doubling the size of the IRS, empowering the agency to reach its grubby little hands into ever more people’s pocketbooks,” says an article at Reason.

Geez, just what we Americans have been waiting for… right?

However, the bill says nothing about improving the IRS’ infamously lazy and lax customer service and data security. “Our major concern is that the IRS provisions of the bill contain no accountability… to reform and improve its processes,” says Andrew Lautz of the National Taxpayers Union.

Even scarier? When it comes to expanding the IRS, the bill’s ostensible purpose is to go after wealthy taxpayers — the self-same group with the resources to hire scads of tax attorneys to take advantage of every tax-code loophole imaginable.

“I think [the danger] with any enhanced IRS efforts,” Lautz says, “is that they fall hardest on low- and middle-income taxpayers… History has shown us that the IRS will go after the low-hanging fruit.”

All to say expanding the IRS goon squad is wrongheaded on so many levels: The wealthy will continue to evade the IRS while the “little guy” suffers the consequences. Meanwhile, for a bill intended to generate revenue, hiring heaps of salaried federal employees is a real head-scratcher…

Yesterday, Hershey CEO Michele Buck warned the candymaker wouldn’t be able to keep up with consumer demand… which isn’t to say Hershey’s earnings report was a bust. On the contrary, the company reported net sales increased almost 20% for Q2 2022, a solid earnings beat.

“Ms. Buck said the company had found it more difficult to secure ingredients as a result of the war [in Ukraine],” says a BBC article. “She added that disruption to Russian energy supplies to Europe… was affecting Germany, where Hershey sources equipment and supplies.”

Meaning, Hershey’s fourth quarter might be obliterated seeing as Halloween candy sales account for one-tenth of the company’s annual revenue.

Better stock up now on those KitKats and, even better, Reese’s Peanut Butter Cups…

And here’s a very British supply-chain snag: “HALF of Britain’s 10,500 fish and chip shops could close,” says the U.K.’s Daily Express.

The reason given: “The spiraling costs of ingredients and energy in the wake of Russia’s invasion of Ukraine.” Indeed, “Andrew Crook, president of the National Federation of Fish Friers, said his cod supplies have already risen from £8 per kilo to £14.”

And here’s one east-England “chippy” — of the estimated 5,000 — that’s fallen victim to inflation… and Putin? 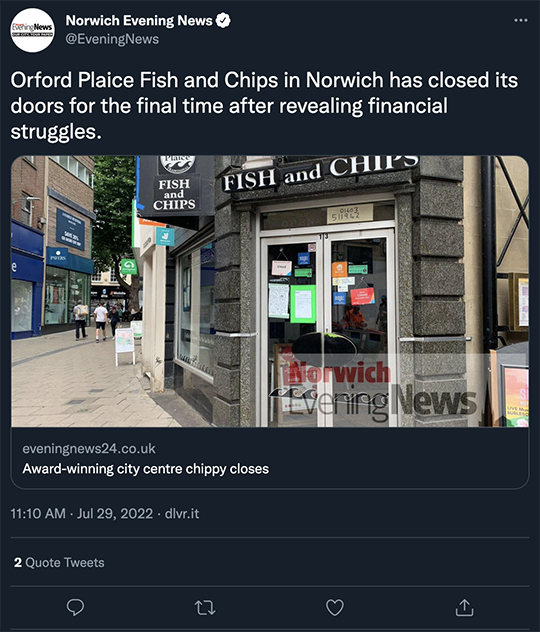 In another instance of backfiring sanctions, shuttered chip shop owners might just as easily blame the U.K. Treasury, which slapped a 35% tariff on seafood imported from Russia “in a bid to hammer President Vladimir Putin over his invasion of Ukraine,” the Express says.

You all have an excellent weekend, and we’ll be back with more on Monday. In the interim, check out Saturday’s issue for yet another supply-chain snafu.