Sen. Kyrsten Sinema (D-Arizona) just threw millions of self-employed Americans and small-business owners under the bus — as a favor to private-equity and hedge-fund types.

Sinema is one of two “moderate” Democrats who make the party’s Senate majority even more tenuous than the “50-50 plus the vice president” arrangement would suggest.

The other one, West Virginia’s Joe Manchin, gets most of the headlines — but not for lack of weird attention-getting stunts on Sinema’s part like this roll-call vote…

As we noted last week, Manchin has signed on to a scaled-down version of Joe Biden’s “Build Back Better” bill, now rebranded as the “Inflation Reduction Act.” (Sheesh…)

Sinema’s support, however, was up in the air — until a sleazy backroom deal struck late last night.

At the heart of our harangue today is a plank in the bill that would build out the IRS’ capacity to audit and harass everyday taxpayers.

The bill sets aside nearly $80 billion over the next nine years for funding the IRS. That’s an average $8.9 billion a year — a staggering sum considering the IRS’ annual budget now is $12.6 billion.

And rest assured, the primary target will not be “wealthy tax cheats.” No, it’ll be the backbone of the American economy — small-business owners and the self-employed.

They’re always big fat marks for the tax man, given the complexity of the tax code for anyone who isn’t a W-2 employee. One tiny misstep and bam — they’re audited for inflating deductions or (more likely) underreporting income.

“The main targets will by necessity be the middle and upper-middle class because that’s where the money is,” affirms the Journal Op-Ed.

Sen. Sinema could have used her considerable clout to squelch this scheme. Instead, she went to bat for well-heeled finance types.

Under the backroom deal that emerged last night, the “Inflation Reduction Act” will no longer include an increase on taxes applied to “carried interest income.”

We won’t get into the weeds here. Suffice to say carried interest is a type of profit that’s accrued mostly by hedge funds and private equity. 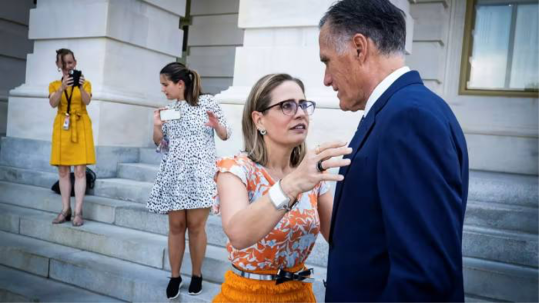 From The Wall Street Journal’s news pages: “Ms. Sinema told donors at a campaign fundraiser Wednesday night on Capitol Hill that it made no sense to squeeze the private-equity industry with an increase in carried interest taxes, according to a lobbyist who attended the event.”

Well no, it probably doesn’t. But that’s not the point: Look at where Sinema has decided her bread is buttered. She’s made a shameless choice to assuage her donors at the expense of middle- and upper-middle-class folks who have no lobbyists on K Street to speak up on their behalf.

Just sick. The Senate will remain in session past its scheduled adjournment tonight just to push this abomination past the finish line. Perhaps some of the details will be changed yet again before all’s said and done; if so, we’ll follow up Monday.

The U.S. stock market is mostly shrugging off the July job numbers.

They came in way better than expected: The wonks at the Bureau of Labor Statistics conjured 528,000 new (or revived) jobs for the month — more than double what the “expert consensus” was counting on.

With that, all the jobs lost starting in the spring of 2020 have now been recovered. That sounds nice, but the process took an excruciating two years and five months.

Check out the big chart from Calculated Risk, depicting the job losses and recoveries from every post-World War II recession. The recovery shown on the red line is the briefest in over 40 years, yes… but longer than literally every postwar recession before 1990. (Yes, you can click the chart to embiggen…) 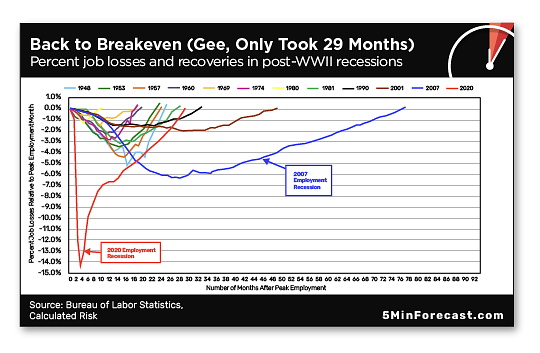 The official unemployment rate ticked down to 3.5% — equal to the February 2020 pre-pandemic figure.

There’s nothing in these numbers to dissuade the Federal Reserve from sticking to its “tightening” policy — and by extension, choking off Wall Street from its steady supply of EZ-money heroin.

The betting in the fed funds futures market this morning? A 65% likelihood the Fed will raise short-term interest rates another three-quarters percentage point at its next meeting on Sept. 21.

And yet the major U.S. stock indexes seem unconcerned. The bond market is another story.

But oof — the yield on a 10-year Treasury has leaped from 2.7% only 24 hours ago to 2.84% this morning. Might not sound like much, but that’s an earthquake in the bond market — a widespread expectation that the Fed jacking up short-term interest rates will eventually have an effect on longer-term rates too. (That little dip in mortgage rates the last few weeks? Yeah, it’s over now.)

Crude is getting its bearings after this week’s big tumble — up $1.40 as we write to $89.94. As we took pains to mention a few days ago, this is the paper price; if you want real barrels of the stuff for delivery, expect to pay several dollars more.

We have a bulging mailbag after a couple of single-topic editions of The 5 this week, so let’s break it open for an extended mailbag section as we head into a summer weekend.

“My parents were married on Dec. 21, 1932,” says a reader born in the later years of the Great Depression.

“They lived in a small German community in western Colorado and their wedding lasted for three days and nights. Each time someone would dance with my mom they would pin some money on her.

“They ended up with $50.00 and it was this cash that they farmed and lived on for their first year. They said they mostly ate ‘milk soup’ — egg noodles in hot milk derived from their chickens and cow.

“I am 84 and I was actively farming a 2,200-acre wheat operation when Fed chairman Paul Volcker took interest rates up to 22% on farm operating loans.

“Lessons learned from the ‘Depression memories’ that my parents handed down to me were the only way my wife and I made it through that interest rate hell.

“This nation is in for some tough times!”

“Why did it take 16 YEARS for researchers to test out the amyloid plaque theory?” a reader writes in the wake of what looks like academic fraud that led Alzheimer’s researchers down a dead-end path.

“I thought the whole point of peer-reviewed research was to not only analyze the integrity of the data, but to repeat the experiment and achieve similar results before considering it valid.

“I honestly wonder if pharma companies deliberately devise drugs based on limited research to not only be first on the market, but to convince people to take the drug as being ‘better than nothing.’

“I remember Ray Blanco’s concerns in 2015; it’s great to be validated. Not so great to know that the pharma industry never bothered to research the amyloid theory further, while prolonging the suffering of patients and their families. What’s the definition of insanity?”

“My wife died of Alzheimer’s about three years ago.

“In December of 2011 she became a patient of Dr. David Perlmutter in Naples, Florida. He said at that time that amyloid plaque was a byproduct of the brain trying to heal itself. When he stopped seeing patients, we shifted to Dr. William Summers in Albuquerque and he was and still is of the same opinion.

“It did not help my wife, but at least they were not barking up the wrong tree. So yes, this has been known by some doctors for a long time. I’m glad that more doctors are recognizing this truth. Sorry it has taken so long.

“I am currently of the opinion that Alzheimer’s has several possible causes among which are chronic inflammation and the consequences of physical injury, such as concussion.”

“So what were the incentives to fabricate data? Who benefited and how? Was this like one of those stories about someone who thought he had a scheme that would allow him to rip off the mob and get away with it? There’s certainly more to this story.

“Thanks for The 5! Always enlightening reading.”

“Tell Zach he can bet his paycheck on new surges in inflation — much of it guaranteed by government entities,” a reader writes after Zach Scheidt’s warning about an inflation “whipsaw” in Wednesday’s edition.

“As a former education reporter, I know that late summer is when school districts finalize new contracts with their unionized teachers, and every teachers’ union contract includes a strong COLA clause. You can bet that teacher’s pay will be up 8–10% this year, which will bust education budgets and lead to property tax increases, in addition to the inflation that millions of teachers will create as they spend those higher salaries.

“And a few months from now, the federal government will announce an inflation raise for tens of millions of beneficiaries of Social Security and other federal retirement programs. This will add 8% to their paychecks that will fuel additional inflation. It may also lead to increases in Social Security taxes as we get new warnings about the so-called ‘trust fund’ running out of money.

“Riding the tiger is the easy part. Getting off is difficult.”

“Amazing, Dave!” writes one of our longtimers after I revealed all of the sources I consult in the course of preparing these daily messages.

“That informational diet could get overwhelming — especially since some of those outlets you’re tracking aren’t, well, friendly. The big media/tech sources you mentioned include a few of the worst mindf***sters and propagandists.

“Your regimen brings new meaning to scouting your opponents. You do it extremely well.

“Plus the fact that your head (and life) hasn’t exploded after so many years is impressive.

“Thank you as always.

“I have been lurking for a while, but value your work as much as ever. Keep giving ’em hell and ignoring the whiners!”

“Thoroughly enjoyed your summary of your typical day,” writes our final correspondent — “and how you rounded out yesterday’s 5 with the poignant meme ‘turn off the news. go outside.’

“I’ve been there from the beginning of The 5.”

Just started thinking about this: My daily hands-on involvement in The 5 goes back 12 years — which is more than one-third of my “adult” life. My gratitude to you and the rest of the readership for helping make it possible!

“I’ve maintained that the United States has been living through a New Great Depression since 2007,” says our macro expert Jim Rickards. Read More