“The 5 is the only place I get my ‘news’ anymore,” a reader wrote to us in 2019. “It’s clear to me you call it like you see it with no political bias whatsoever. So keep doing what you’re doing!”

Affirmed another: “The only news I get is here and from a couple of mainly financial newsletters.”

We were aghast. In response, we paraphrased the cereal commercials of days gone by — The 5 Min. Forecast is only part of a well-balanced informational diet.

Around the same time, a reader requested “For Dave: I’d be interested in a description of your daily informational intake. Love The 5!”

Nor was he the only one.

It’s a good question — especially considering my own background with two decades in the TV news racket. I’ve been out for 15 years, but the news-junkie part of me never went away. I’ll never tire of coming across a story that makes me say, “Holy $#*%!”… and I hope that zeal comes through to you in these daily missives.

I promised back then to divulge my daily informational diet, more than once — but didn’t get around to delivering.

On the presumption that late is better than never, here goes…

For starters, I’m compelled to point out that at the core of this e-letter are the paradigms — the ways of looking at markets and the economy — developed by our own experts at Paradigm Press. Without that, I’d be just another rando on the internet.

Jim Rickards’ input — especially in the early years of his work with our firm — has been seminal. James Altucher provides a crucial window into the world of crypto and DeFi. George Gilder has earned his billing as “America’s No. 1 futurist.” Ray Blanco is ahead of the curve in tech and biotech. Zach Scheidt’s passion for income and value investing is second to none. Alan Knuckman — my partner on The Profit Wire — knows trading like no one else. Byron King has been my colleague for 15 years, keeping a pulse on energy and natural resources.

Basically, I have the same level of access to their ideas as do members of our VIP level of service called the Omega Wealth Circle — only I get paid to read our editors’ work instead of the other way around!

[As long as I brought it up: Are you intrigued by the idea of all-you-can-eat access to everything we publish? That’s what our Omega Wealth Circle offers. The key advantage is the substantial savings you achieve over subscribing to all of our services individually.

The Omega Wealth Circle isn’t for everyone… and we don’t open membership to just anyone. But if you already have two or more subscriptions with us, you can expect an invitation sooner or later.]

My day begins at 5:00 a.m. Eastern Time. First thing, I skim the news alerts that crossed my iPad overnight. (More about those later.)

From there, it’s a regimented sequence that goes like this…

Ideally, I burn through all of that in about 20 minutes. Then it’s off to the rest of my morning activities before I settle in for the day in earnest and resume my morning news cruise…

Yes, I still scan the Drudge Report. Only on workdays, and only once in the morning. Anything more would be an assault on my sanity.

In part it’s just habit. Feels as if I’ve been checking Drudge for as long as I’ve owned a computer. (I got my first in 1996.)

And while Matt Drudge is no longer a window into the news consumption habits of a typical 5 Min. reader — many told me they gave up on him during the Trump years — he’s still the premier internet news aggregator.

To this day, I come across things via Drudge that I won’t learn anywhere else — for instance, Peter Thiel’s take on GDP that I included in last Thursday’s edition.

Beyond Drudge, I check a handful of other sources before applying fingers to keyboard…

Too, I still keep up with currency maven and old friend Chuck Butler, proprietor of the venerable Daily Pfennig e-letter.

I guess we have to talk about Twitter now.

To be clear, neither I nor The 5 has a Twitter account. I suspect it could easily become an addiction. But by following a dozen or so key accounts using a web browser with cookies disabled, I discover…

Here are some of the financial accounts I follow most closely…

You’ll notice a lack of “conservative” websites on my list.

Sorry, but most of them are really subpar. A couple years ago I solicited reader input about what folks were reading instead of Drudge, and I was shocked at the level of quality. Any worthwhile original reporting was buried in story after story whose only purpose was to reinforce right-wingers’ tribal identity. (Of course, the purpose of much mainstream reporting these days is to merely reinforce left-wingers’ tribal identity.)

If there is worthwhile original reporting at such a conservative site — i.e., Chuck Ross’ Russiagate coverage for The Daily Caller — we figure we’ll hear about it via Twitter or the other sources listed above.

Same goes, by the way, for the premier “alt” financial site ZeroHedge. (We have our issues with ZH — but all the same, we’ve been compelled to rise to its defense more than once.)

Because the news never stops, I stay abreast of events even as I write.

I like to think one of the unique elements of this e-letter is that of immediacy. Yes, I’m often writing about longer-term trends… but if I can point out there’s something happening right this minute to underscore my point, well, so much the better.

So my iPad is set up to receive news alerts from maybe a half-dozen sources.

It’s kind of amazing when I think about it: Modern technology gives you and me and everyone else the same adrenaline rush that was once limited to folks who worked in a newsroom.

Long before the internet came along, every newsroom had access to a “wire service” furnished by an agency like The Associated Press.

When breaking news happened, the teletype would go ding-ding-ding. Would it change the lineup of tonight’s newscast? Or the layout of tomorrow morning’s front page? The only way to know was to get up from your desk and walk over to the machine. 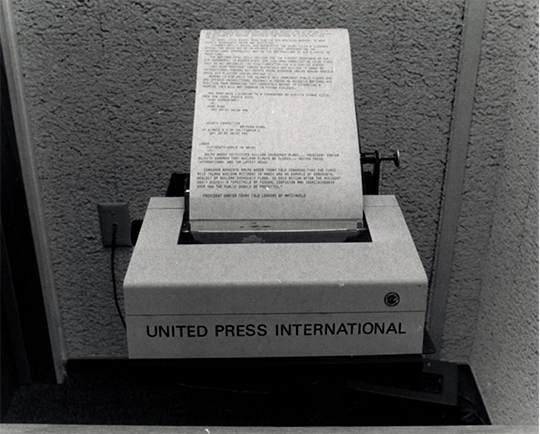 As newsrooms computerized in the 1985–95 timeframe, the wire services were fully integrated into those systems along with other functions like word processing, story filing, etc. No need to get up from your desk anymore; breaking news appeared at the top of everyone’s screen at once. But well into the 21st century, the little dopamine hit that came with every “urgent” or “bulletin” (or the extremely rare “flash”) was still limited to newsroom types.

That all changed when Apple launched iOS 3 in 2009 — incorporating push notifications. Every news purveyor with an app could send breaking news straight to your pocket.

The 5 wouldn’t be what it is without it — not only for the sake of immediacy, but because I can mock the media’s groupthink now and then.

Too, I have a handful of international news channels streaming on three or four screens with the sound down. It gives me a ground-truth perspective on the news and the markets in other countries.

There’s France 24, Germany’s DW, Qatar’s Al Jazeera, Russia’s RT and China’s CGTN, among others. Yes, they’re all government-run and have an agenda. But they’re way less crazy-making than American news channels. Too, having them on is kind of a throwback to my shortwave radio-listening days.

And truth be told, it’s also a way to recreate a newsroom atmosphere in my home office — you know, with all the TVs tuned to various channels… 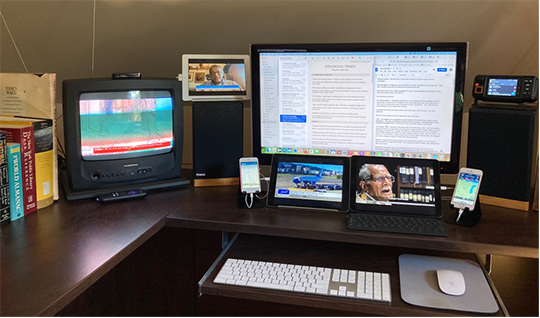 If all of this sounds a little intense, well, I suppose it is.

Nor is the intensity limited to my “working” hours. There’s always something urgent or important or interesting happening. Rare is the evening or weekend when I’m not jotting something down that I think might be useful for these daily missives.

Which is all fine. What’s less fine is that the intensity has been amped up to extreme levels ever since the world started flying apart 2½ years ago.

In a world of arbitrary lockdowns… riots brought on in part by economic insecurity… a tightening noose of censorship… the risk of getting “financially cancelled”… and the starkest threat of nuclear war in 60 years… yeah, it’s overwhelming.

If I’m not careful… I’ll function in a chronic state of anxiety that I’m missing an important piece of information for my writing… or for the life that my wife and I have worked so hard to create for ourselves… or both.

Gotta stay centered and have faith that I’ll see what I need to see when I need to see it. And it’s with that faith I went out for an hour-and-a-half hike this morning before sitting down in the chair.

Which reminds me… I ran across this meme recently and keep it on my computer desktop now. I share it with you now because, well, maybe you need it as a reminder too? 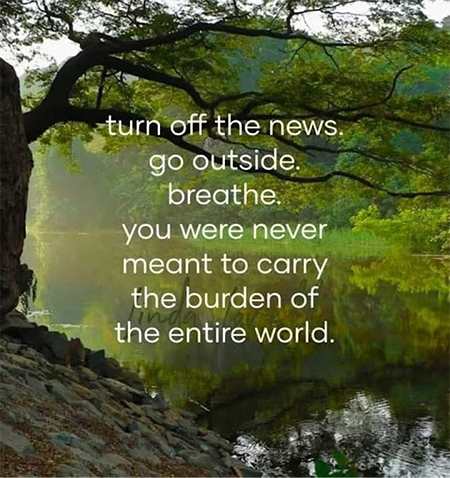 The big economic number is weekly jobless claims — up again to an eight-month high, but still low by historical standards.

Tomorrow’s monthly job numbers have the potential to be market-moving in a big way. Catch you then…

Here or earlier would it be good to note that you work remotely?