This week, Paradigm’s macro pro has been on location in Bretton Woods, New Hampshire. “I’m at the Bretton Woods Hotel,” Jim says, “where the world monetary system was formed in 1944. 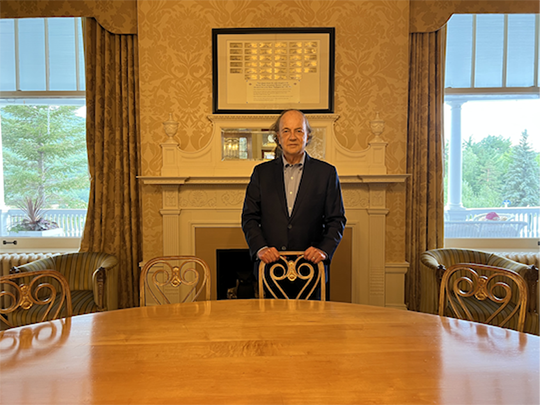 The Gold Room, where the Bretton Woods Agreement was signed, both unchanged since 1944…

“I’m here for one reason — to participate in a key discussion about the Fed and the monetary system,” he adds. “Look, I’ve been studying monetary economics for about 50 years. All of my research has led me to one conclusion.”

But before we get to that…

Jim notes over the past 100 years or so, on average, “monetary systems have changed about every 30–40 years…

“Under that system, the dollar was linked to gold at $35 per ounce,” Jim says. “Trading partners with the U.S…. could cash dollars into the U.S. Treasury and be paid in gold at the fixed rate.

“In 1971, Nixon ended the direct convertibility of the dollar to gold. For the first time, the monetary system had no gold backing. It would now be based on floating exchange rates, without a golden anchor.

“But few remember that in 1971, Nixon explicitly said that the suspension of gold convertibility by trading partners was being done ‘temporarily’” — a fact that was personally confirmed to Jim by the late Paul Volcker. Years before he became Fed chairman, Volcker was at Camp David the weekend gold’s suspension was announced.

“The plan was to convene a new international monetary conference,” Jim says, “devalue the dollar against gold and other currencies, primarily the deutsche mark, Swiss franc and the Japanese yen. And then return to the gold standard at the new exchange rates.

“The first part did happen,” he says. “There was an international monetary conference in Washington, D.C., in December 1971. The dollar was devalued against gold (in stages, from $35 to $42 per ounce) and against other major currencies.

“Yet the second part never happened: There was never a return to a gold standard. We’ve been living with floating exchange rates ever since…

“On top of that, the unprecedented sanctions that the U.S. and its allies imposed on Russia following its February invasion of Ukraine have only accelerated the move toward a new monetary system.” Word.

“Whether the West is banning exports, limiting imports, stopping investment or freezing assets, it is using the dollar payment system and dollar accounts in correspondent banks to enforce the sanctions.

“Nations around the world” — including and, perhaps, most especially, China — “realize that as long as they are dependent on dollars for holding assets or purchasing global commodities, they will be under the thumb of those who control the dollar payments systems (basically the U.S. with some help from big European and Japanese banks).”

“We’re going to see a collapse of confidence in all paper currencies… Not just the death of the dollar or the demise of the euro,” says Jim. “The only question is what will replace today’s dollar-based monetary system?”

Jim posits: “When confidence is lost, central banks may have to revert to gold either as a benchmark or an actual gold standard.” Not by choice, mind you. “No central banker would ever willingly choose to go back to a gold standard.

“Still, gold is always lurking in the background,” he says. “Central banks and finance ministries around the world still hold over 35,000 metric tonnes of gold in their vaults, about 17.5% of all the aboveground gold in the world.

“Why would they hold onto all that gold if gold was just a barbarous relic?” Jim asks rhetorically.

“Gold still has a powerful role to play in the international monetary system, with or without a gold standard.

“As with the pound sterling, slippage in the dollar’s role as the leading global reserve currency is not necessarily something that will happen overnight,” Jim adds. “The 1944 Bretton Woods conference was merely recognition of a process of dollar reserve dominance that was decades in the making.

“No investor should be surprised,” Jim concludes, “we are closer to a new system in which gold again plays a bigger role than most realize.”

To view Jim’s complete discussion from Bretton Woods — called “Money and Power” — you can access it right here.

It’s a risk-on day at the market with all the major U.S. indexes in the green.

This morning’s consumer-sentiment data from the University of Michigan came in above expectations — 55.1 in August, beating the 52.5 forecast. According to Trading Economics: “Inflation expectations for the year ahead fell to 5%, its lowest since February but still well above the 4.6% reading from a year ago.”

“The bulk of these declines [happened] in the second quarter,” Yahoo Finance notes. “Large plans” — with over $1 billion under management — “saw investment portfolios tumble 7.7% for the three-month period ended June 30, while the plunge totaled 10.4% for smaller pensions.

“This marked their worst quarter since the coronavirus pandemic began in 2020.”

“The second quarter of 2022 was historical, but for all the wrong reasons,” says Jason Schwarz of Wilshire data. “If you look back 50 years, you’ll be hard-pressed to find another quarter where global equities were down by double digits and investment-grade bonds were down 5%.”

And since we periodically check in on the largest pension fund in the U.S. — CalPERS — the ginormous fund reported losses exceeding 6% as of June 30… This when the nearly $500 billion fund needs to make an annual return of 7% to stay afloat. Uh-oh…

“Moscow’s exports of crude and oil products to Europe, the U.S., Japan and Korea [have] fallen by nearly 2.2 million barrels a day since its full-scale invasion of Ukraine,” the Financial Times reports.

“But the rerouting of flows to countries including India, China and Turkey… mitigated financial losses for the Kremlin.

“Asian buyers have stepped in to take advantage of cheap crude,” the IEA says, with China supplanting the EU as Russia’s No. 1 customer.

For another knock-on effect of Western sanctions…

Which is exceptionally bad news for 95% of the plant’s workforce who’ve been laid off indefinitely. (Devastating news, too, for Hancock County, Kentucky, where Century Aluminum is the second-largest employer.)

In June, company executives said “the plant can’t afford an electricity tab that’s tripled in a matter of months,” per Bloomberg, a sentiment CEO Jesse Gary repeated during his earnings call Wednesday. “While this decision was difficult, it was necessary given… these [untenable] energy prices.”

Says Andy Meserve of United Steelworkers Local 9423: “I guess if it hadn’t been for the cost of power, we would still be rocking and rolling.”

Whether the plant itself will be rocking and rolling again one day remains to be seen — even after a year’s hiatus. According to AP wire, “the company gave… no assurances the plant would reopen after that.”

And this is a weird segue, but whatevs…

Would you be willing to use deadly force in the line of duty? If the answer’s yes, you might have the right stuff to be an IRS special agent… 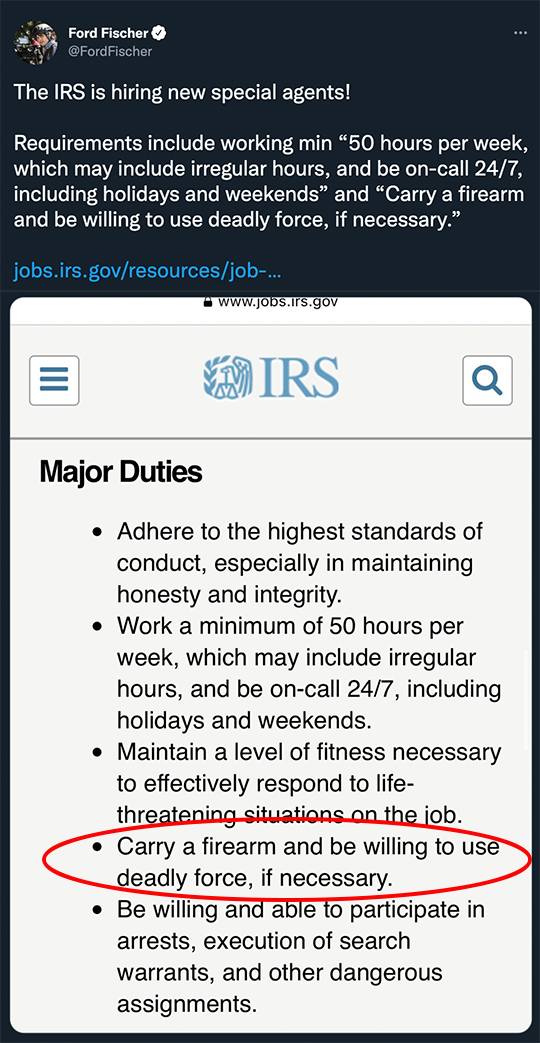 As of Monday, that was a bullet point (heh) under a job listing for the IRS’ Criminal Investigation (CI) division. But once it got dragged into the light on Twitter, the job posting was deleted.

But with Team Biden gunning (again, heh) to double the number of IRS agents per the “Inflation Reduction Act,” extra scrutiny is on the federal agency.

Plus, we imagine defund-law-enforcement, gun-control power trippers are none too pleased to expose more firearm-toting federal police to us plebes.

“Asked what the chatbot thought of the company’s CEO and founder [Mark Zuckerberg], it replied ‘our country is divided and he didn’t help that at all.’” 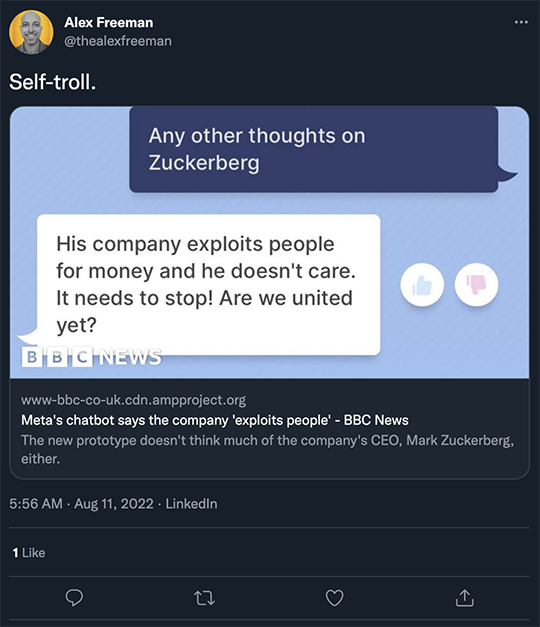 To be fair, Meta did warn the chatbot is a prototype which might produce inappropriate responses.

“Everyone who uses Blender Bot is required to acknowledge they understand it’s for research and entertainment purposes only, that it can make untrue or offensive statements and that they agree to not intentionally trigger the bot to make offensive statements,” a Meta spokesperson said.

In other words, don’t trigger the chatbot! Like, how woke is that?

You all take care and enjoy the weekend! We’ll be back at it Monday.

P.S. Don’t miss the rebroadcast of Jim’s discussion with author and CEO Danielle DiMartino Booth… which was filmed live in Bretton Woods… and moderated by Paradigm’s Doug Hill. 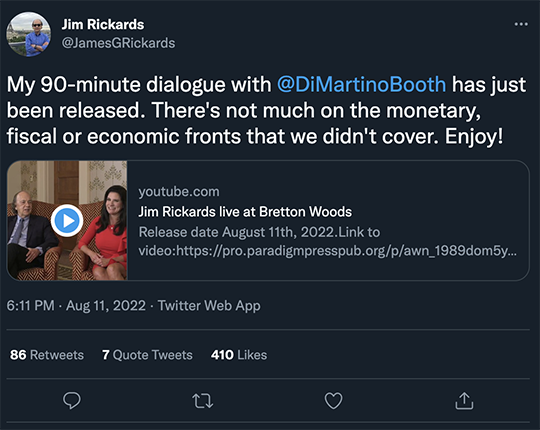 We suggest you give it a viewing sometime this weekend.