The Midas metal ended last week above that round-number threshold… and promptly fell back below it when electronic trading resumed last night at 6:00 p.m. EDT. This morning, it’s stuck below $1,780.

The dollar rallied — taking down the dollar price of gold, silver, oil and just about everything else in the commodity complex.

And yet… Paradigm Press’ macro authority Jim Rickards says, “We have a setup for asymmetric trade in gold.”

“Asymmetric” trades are Jim’s favorite kind. The downside is limited… while the upside is enormous.

“There’s no guarantee you will make money in gold, but there’s good reason to believe you won’t lose much if anything,” says Jim. “You can aim for the upside with limited downside. Those are the best kinds of trades to make.”

The downside is limited because gold has finally pulled out of its summer doldrums.

“That’s not the rocket launch gold investors were hoping for. But it is a substantial gain from the interim lows. More importantly, it shows that gold is resilient. The $1,700 tick was not a stop on a much greater drawdown. It was just another dip on the way to higher ground.”

While the Federal Reserve is scrambling to raise short-term rates — the rates they have control over — longer-term rates are climbing down. The yield on a 10-year Treasury note peaked in mid-June at 3.48%. As we write this morning, it’s 2.77%. That drop is confirmation “that the economy is slowing down and rates are in a downward trend,” says Jim.

Too, the yield on the 2-year T-note remains higher than the 10-year at 3.2%. That’s an unnatural condition known as an “inverted yield curve,” almost always a precursor to recession.

“This combination of declining yields and an inverted yield curve signaling even lower rates in the future is an impetus for higher gold prices,” Jim says. “Gold competes with Treasury notes and stocks for investor allocations. When rates are coming down and stocks are on a downward trend also, that’s a tailwind for the dollar price of gold.

“The other factor giving life to gold prices is geopolitical uncertainty,” Jim continues.

“The crisis list is well-known, including supply chain breakdowns, higher tensions in Taiwan, the continuing war in Ukraine, the impact of economic sanctions resulting from the war, recession indicators (or outright recession) in Europe, Japan, China and the U.S. and looming elections.”

It’s tempting to say all of those things are “old hat” by now — which Jim believes would be a tragic mistake.

“The economic impact of the war in Ukraine has scarcely been felt relative to what’s coming,” Jim warns. “Both natural gas supplies and food supplies have been sustained by using up reserves accumulated either before the war or in the last harvest. Those reserves have now been drawn down. Even the U.S. Strategic Petroleum Reserve (SPR) has been severely depleted by Joe Biden’s clumsy efforts at price manipulation.

“With winter coming, the natural gas shortages will be severe. Germany will have to resort to rationing, which will leave assembly lines shut down and citizens wearing sweaters to bed as thermostats are turned down to 55 F. Food will be in short supply either due to failed harvests (in turn due to shortages of Russian fertilizer exports) or the inability to physically ship harvested crops due to sanctions or port activity disrupted by the war itself.

“This kind of energy and food disruption coming to the top of what is already a global recession will push the world economy into free fall. A global liquidity crisis cannot be ruled out. All of this will move uncertainty higher and interest rates lower. For better or worse, that’s an environment in which the price of gold should surge.”

If you’ve already amassed Jim’s recommended 10% portfolio allocation to physical gold, you’re ready for the next step to protect yourself as the global economy approaches the abyss. Click here to examine Jim’s action plan — based on an exhaustive study of market patterns and intelligence.

So yes, as noted earlier, the dollar is back on the rise — sending the commodity complex lower.

Oil’s drop may or may not be a reaction to lousy economic numbers from China, the world’s biggest oil importer.

None of this is a surprise, given the government’s refusal to dial back on its “zero-COVID” policies — so extreme that on Saturday, customers at an Ikea in Shanghai rushed to the exits before the authorities could round everyone up to be sent to a quarantine camp… 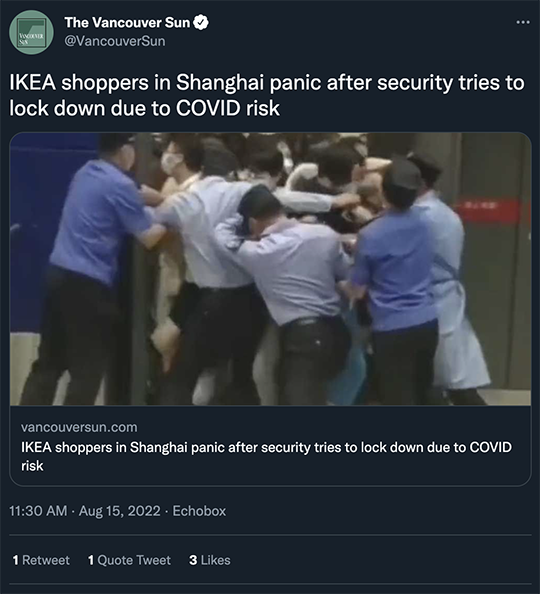 “The Ikea store’s sudden shutdown,” reports the BBC, “was ordered because a close contact of a 6-year-old boy who tested positive after returning to Shanghai from Lhasa in Tibet had visited, Shanghai Health Commission deputy director Zhao Dandan said on Sunday. He did not say when the close contact was believed to have been at the store.”

Bonus points: The boy is asymptomatic.

The economic numbers stateside are little better. We got two reports this morning that give us our first glimpse into the U.S. economy’s performance so far in August…

Cryptocurrencies tried to rally over the weekend, but then gave it all back. Still, Bitcoin is over $24,000 and Ethereum over $1,900.

“I do think inflation will pull back some. But that means prices will continue to rise — just less of an increase than what we saw over the last year,” ventures Paradigm’s income-and-retirement specialist Zach Scheidt.

Zach felt he was sticking his neck out last month during one of our weekly editorial Zoom calls — suggesting the official inflation rate of 9.1% had peaked. That was out of step with conventional wisdom — which said inflation was destined to race still higher. But Zach was right about the trend, with the July number falling to 8.5%.

Yeah, forget it. Inflation “is still a big deal for American families this month,” says Zach, “and will be for many months to come.”

Wait, the much-ballyhooed avocado shortage isn’t real? Not in Australia, it’s not… 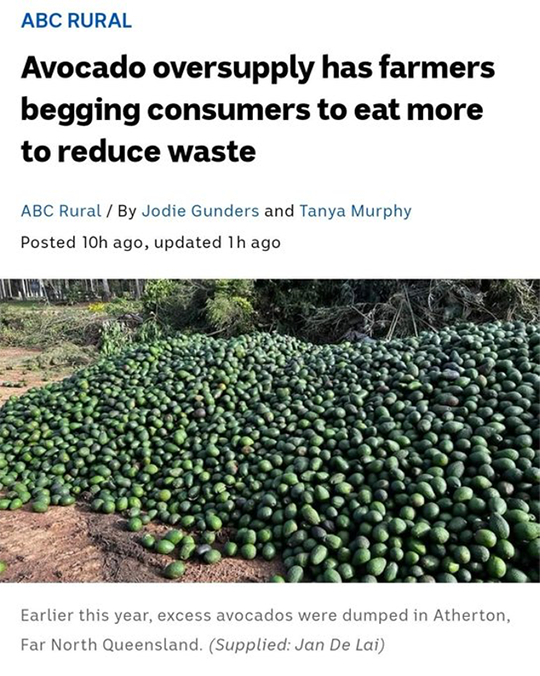 “A new report by agribusiness bank Rabobank said Australian growers would this year produce 22 avocados per Australian, up 26% on last year’s figures,” according to Australia’s state-run ABC broadcaster.

Retail prices have tumbled to a record-low AU$1 apiece, or about US$0.70.

Americans, meanwhile, pay double that figure — $1.41 — thanks in part to a hailstorm in Mexico and rising fertilizer prices resulting from the Russo-Ukraine war and Western sanctions.

The Aussies are looking to expand their avocado exports beyond the current destinations of Singapore, Hong Kong and Malaysia. The Rabobank report says additional markets could be opened up as far away as Japan and the Middle East.

Hmmm… Guess transportation costs and spoilage make it not feasible for the North American market? (We could snark about millennials and their avocado toast, but we’ll pass today…)

To the mailbag — where a reader in Paris serves up further background on the poor fellow in Lebanon who only wanted to withdraw money from the bank and had to take hostages to do it.

“You already know that in that country, people with bank accounts in foreign currencies (typically in USD) can’t withdraw cash in those currencies or make a wire transfer abroad — they can still get Lebanese pounds for their foreign currency, but at a ridiculously low exchange rate.

“I recently met a Lebanese in Paris who has $50,000 in his bank account in his home country and who gave me some details. It’s still possible to make wire transfers within Lebanon (but again, this is electronic-only money as USD can’t be withdrawn at the counter).

“A parallel market at a 30% rate has also emerged: For example, if you have $100,000 in the bank and you want to get some cash, you can transfer this amount electronically to another Lebanese bank account and the recipient will give you $30,000 in cash.”

“Good update on the convoy,’” writes a reader who appreciates our recent status report on the fate of the Canadian truckers.

“Follow-through is important, especially since it seems more and more that Canada is the incubator for new schemes to prevent dissent and reduce mobility. Just to add something to it, however: (As a former resident of Canada, I maintain a Canadian news feed.) Tamara Lich was given the same onerous punishments for ‘counseling mischief’ as those given to Pat King.

“Two weeks before Canada Day on July 1, she was detained by the RCMP without charges so that she could not organize ‘Rolling Thunder.’ Does any semblance of a free and civilized society remain in North America? How does this differ from the methods of the former Soviet Union we were sent to Vietnam to protect us from?

“Not a coincidence, I think, that a Jan. 6 defendant was also charged with and sentenced for ‘counseling’ insurrection. If laws against counseling aren’t suppression of the First Amendment, what the hell is? When did this term ‘counseling’ become criminal anyway? I know this is not strictly finance related, but with no law there is no freedom and bad law is even worse than no law.”

The 5: No need to apologize — getting “de-banked” as happened in February is as finance-related as it gets.

And without the rule of law… commerce, investment and planning for the future become way harder. That’s why we take up these matters regularly…