No Cash, No Escape

“Central Bank Digital Currencies Could Mean the End of Democracy,” warns a column at The Conversation — a nonprofit website where academics can write news analysis for the general public.

Ori Freiman, a post-doc fellow at the University of Toronto, poses some good questions: “Do we want to connect personal financial information with credit systems? How about sharing health expenses or political donations with governments and corporations? What do we think about issuing different money, with different financial characteristics, to different people?”

But it’s heartening to hear someone from the “Center for Ethics” at a prestigious university talking this way — even if he’s doing it cautiously and in a tone that doesn’t step on too many sensitive toes among the power elite.

“We don’t want to leave these questions solely for those who develop and implement digital monetary systems,” Freiman continues, “or raise them too late.

“Currently, concerns about democracy are lagging behind the race to implement central bank digital currencies. We must have these discussions before it’s too late,” Freiman asserts.

The discussion is well underway among the “alt-right” crowd, judging by this meme… 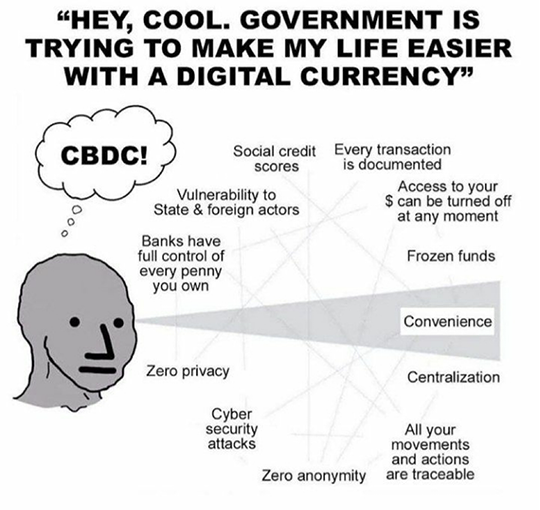 But every indication is that the elites are plowing ahead with their plans regardless — not least because a CBDC is the simplest route to that decades-long elite dream of a cashless society.

“The government hates cash because it’s not traceable,” Jim said yesterday during a briefing for lifetime subscribers to Rickards’ Strategic Intelligence.

“If you spend it, they don’t know that you spend it. They can’t put you under surveillance with cash. I see marked dollar bills, but that’s reserved for serious criminals.”

Negative interest rates were the rule during much of the 2010s in Japan and Europe. But cash gave everyday folks an out: You could just withdraw a bunch of banknotes and stash ’em in a home safe. We chronicled a run on home safes in Japan and Germany in 2016.

But with no cash, there’s no escape from negative rates. “Imagine you get paid [for your work],” Jim says, “and the government says, ‘OK, you got the money. Nice job, but that money is going to evaporate or disappear if you don’t spend it in the next six months.’ How’s that for a stimulus program?

“So none of these things is possible if there’s cash around, but if you get rid of cash and force everyone into a digital system, then you can do these kinds of things.”

Here’s a new wrinkle: A CBDC could be devastating if you’re self-employed or run a small business.

If that’s you, Jim invites you to imagine a world in which you’d no longer make quarterly estimated payments on your income tax… because a CBDC would make it easy-peasy for Uncle Sam to withhold a portion of your earnings.

“That will be greatly enhanced with central bank digital currency.”

It’s one of those days in the markets where there’s nowhere to hide.

Bonds are down — and when prices are down, yields rise. The yield on a 10-year Treasury note is back to 2.91%, the highest in nearly a month.

Precious metals are down — gold off 14 bucks to $1,761 and silver [heavy sigh] back below $20 at $19.77. At Hard Assets Alliance, a U.S. Silver Eagle commands $33.76 — a staggering 70% premium over the “paper price” of silver, and you’ll have to look very hard to find a better deal anywhere else. That’s the reality of the physical market now.

OK, crude is rallying modestly after the Energy Department issued its weekly inventory figures — up close to a buck at $87.43.

The notable earnings number today is from Target — whose profits fell more than expected as the company continues to work off inventory of clothing and other stuff that finally squeezed its way through the supply chain, but that nobody wants to buy now. TGT shares are down 2.6% at last check.

The big economic number is retail sales — ruler-flat for the month of July. Gasoline prices were down, which allowed for folks to spend their still-depreciating dollars elsewhere. If you toss out gasoline sales, along with the always-volatile automobile sales, you end up with a much-better-than-expected jump of 0.7%.

Wanna know what’s way up this week? Thanks to the energy crisis in Europe, it’s zinc — the industrial metal essential for scads of uses, like galvanizing steel.

The giant commodity firm Trafigura announced it would halt production at its Budel smelter in the Netherlands, going into “care and maintenance” mode as of Sept. 1.

Budel accounts for about 2% of global output — thus, zinc prices leaped 7.2% to a two-month high on the London Metal Exchange.

Trafigura’s statement didn’t specify sky-high energy costs as the reason for its decision… but as Bloomberg reports, “Earlier this month, top zinc-producer Glencore Plc warned that Europe’s energy crisis posed a substantial threat to supply. Smelters across the region are barely turning a profit.”

With Europe imposing sanctions on Russia, and Russia responding by curbing natural gas flow to Europe, “Benchmark power prices surged to a fresh record Tuesday as the worst energy crisis in decades looks set to persist well into next year.”

Something’s gotta give. Are everyday Europeans willing to turn down the thermostat to 55 degrees this winter just so their leaders can stick it to Vladimir Putin?

“Shrinkflation” has hit the time-honored business of kids’ lemonade stands. Or so one is led to believe here… 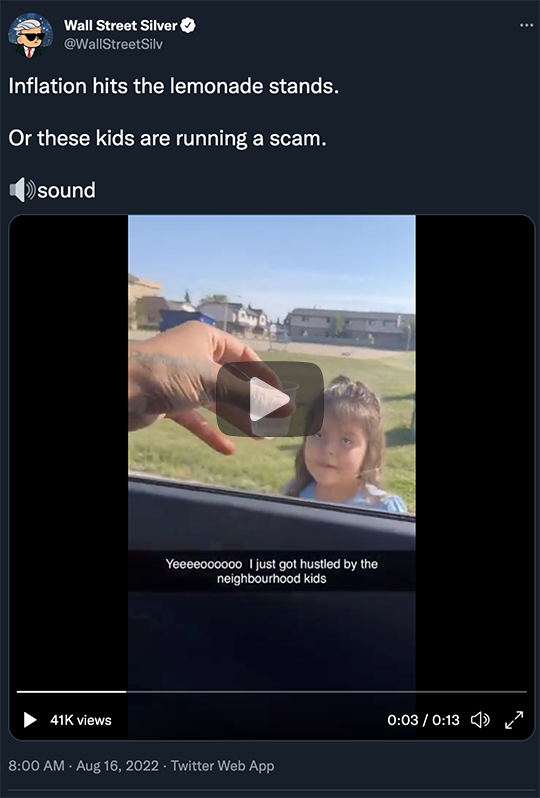 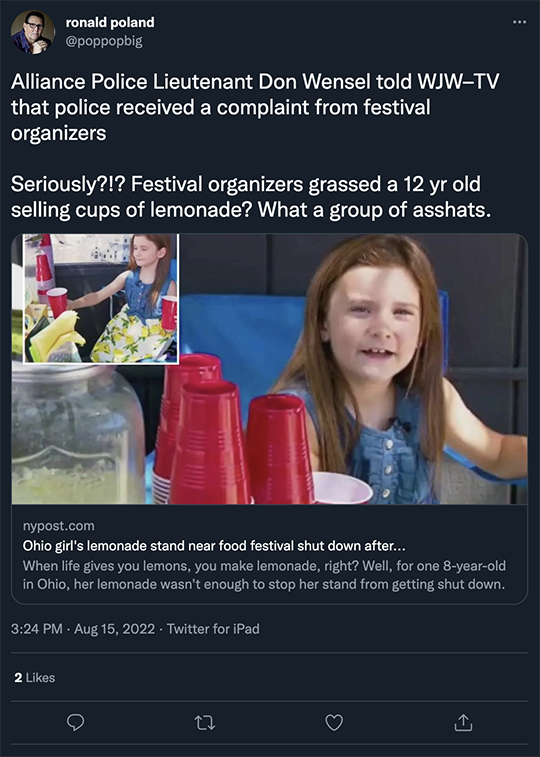 The police force in Alliance, Ohio, did their damnedest recently to snuff out the entrepreneurial spirit of 8-year-old Asa Baker. (To clarify, yes, she’s 8 — not 12.) She set up a stand at her father’s place of business downtown — in an alley about a half-block away from the town’s annual Rib and Food Festival.

Alas, someone from the festival snitched.

“Well, they were really sad that they had to shut me down but they gave me $20 to try and pay for it,” the girl tells Cleveland’s Fox station.

That said, Asa is back in business — setting up shop in front of a local business whose owner, Eric Strata, heard about her plight on Facebook.

The cops are leaving her alone this time — which sounds like a victory for civil disobedience. But it appears they’re leaving her alone only because Strata set up a tip jar so she can accumulate the cash for whatever permit it is she needs to comply with the dictates of the authorities. Oy…

To the mailbag: “I noticed in Monday’s 5 that Jim Rickards’ had a new ‘limited downside, enormous upside’ trade, and that you didn’t mention his previous similar trades (or at least the ones I can recall).

“Back during Brexit, Jim was one of the lone voices who went on record saying he thought Brexit would pass, and when it did the British pound would plunge. I sold the GBP at 3:00 p.m. EDT as the polls were closing. By 3 p.m. the next day, the GBP had dropped from 1.48 to 1.33 and continued a slower slide down over the next few days. A massive winning trade.

“Then six months later Mr. Rickards was one of the few voices who said Donald Trump had a good chance at winning the presidency, and if he did, gold would skyrocket. Trump won and nervous traders caused gold to shoot up $60 in just a few hours before traders finally realized the world had not come to an end and the price retreated back to its previous day’s opening price.

“The point is not to brag about winning on someone else’s trade calls. My point is, if Jim Rickards says he’s found another asymmetric trade with gold, I’m buying gold. That’s all I need to know.

“I mean, I’ve paid for advisory services here and elsewhere that never came close to showing the kind of returns I’ve seen off Jim’s free information. Let’s hope for a long, smooth ascent.”

The 5: Indeed it was during Brexit in 2016 that Jim introduced our readers to asymmetric trades — as he explained them, “Heads I win, tails I don’t lose much.”

These opportunities don’t come along every day… but when they do, Jim is all over them.

The Brexit trade materialized in basically three days’ time. Gold will almost surely take longer to start moving on an upward trajectory. But all the pieces are falling into place, especially if the U.S. dollar continues to weaken as it has over the last month or so…