It’s come to this: The center-left establishment of the Democratic Party is trying to turn IRS agents — of all people — into martyrs… 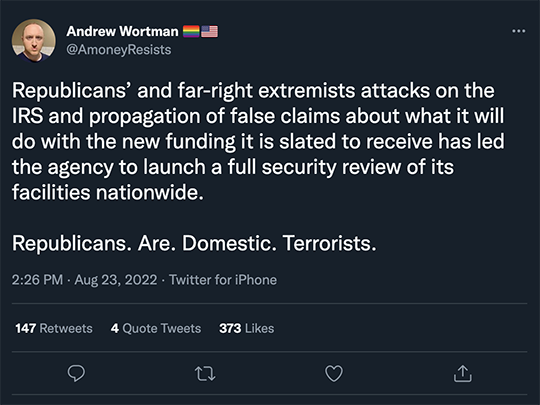 Yesterday the IRS announced it’s launching a top-to-bottom “security review” at all its offices nationwide — a couple of weeks after the president signed the “Inflation Reduction Act” into law, beefing up the IRS’ budget by $80 billion.

“We see what’s out there in terms of social media. Our workforce is concerned about their safety,” IRS commissioner Charles Rettig tells The Washington Post. “The comments being made are extremely disrespectful to the agency, to the employees and to the country.” 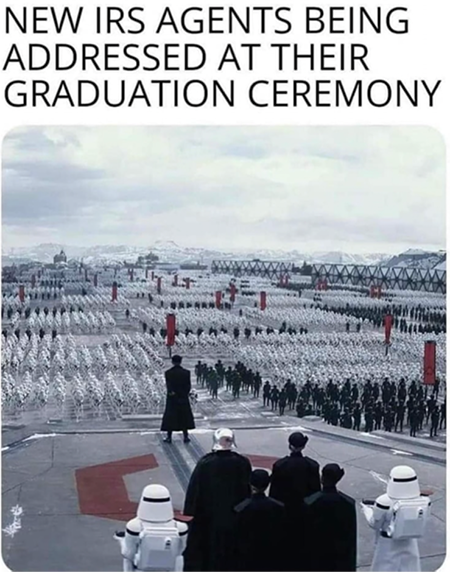 We don’t doubt a few randos on social media are threatening acts of violence… but make no mistake: Rettig is channeling the language of the woke — in which the mildest criticism constitutes a threat to “safety.”

At the very least, IRS critics are already being tagged on social media with the “misinformation” label.

To wit, Hannah Cox of the Foundation for Economic Education. Here’s a tweet of hers that went viral… 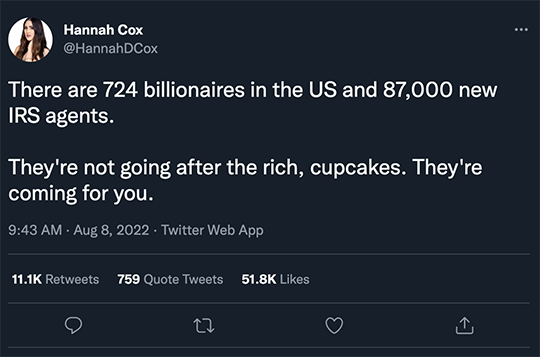 The only “missing context” in the eyes of the fact-checkers was the feds’ promise that the extra funding would not equate to extra audits of households earning under $400,000 a year.

“So essentially,” writes Ms. Cox, “Facebook’s ‘independent’ fact-checkers are merely checking to ensure users tote the government’s own talking points in their posts. Their measure of truth or disinformation is literally just whatever the government’s narrative is at a given moment.”

And make no mistake, the government’s narrative is misleading.

The narrative hinges on an act of verbal sleight of hand by Treasury Secretary Janet Yellen. In a letter to the IRS, she instructed the agency that the new funding “shall not be used to increase the share of small business or households below the $400,000 threshold that are audited relative to historical levels.”

Pay attention to the word “share” there, warns Paradigm Press macro maven Jim Rickards: “Yellen said that the increase in IRS agents will not increase the rate of audits of those making less than $400,000.

“That’s disingenuous. The rate may not increase but the number definitely will.

To be sure, the bulk of new revenue will come from folks making substantially less than $400,000.

We cited figures earlier this month from Congress’ own number-crunchers, the Joint Committee on Taxation: At least 78% of the new revenue raised from underreported income will likely come from folks making under $200,000 a year. At most, 9% will come from those making over $500,000.

So most of Uncle Sam’s new loot will come from the shakedown of small-business owners and the self-employed — folks who aren’t W2 employees and who can be more easily nailed for inflating deductions and (especially) underreporting income.

Now, about the “87,000 new armed IRS agents”: Much of what you see online amounts to hyperbole.

The likelihood that all of them will get weapons training is slim to none. Some of them will be customer-service reps and IT folks — who can start working through the IRS’ massive backlog of returns, maybe? No doubt, some of them will replace the estimated 50,000 IRS employees set to retire in the coming years.

For whatever it’s worth, the IRS says the only employees allowed to carry firearms are its 2,100 special agents in the criminal investigation division. A Treasury official overseeing the IRS tells The Wall Street Journal she expects only about 1,000 such new hires, some of whom will replace retirees. When all’s said and done, the total armed force would still be smaller than it was 25 years ago.

But hyperbole often has a foundation in the truth, and that’s surely the case here.

For one thing, the IRS has amassed a not-insubstantial arsenal. Check out these government figures compiled in a 2020 report by the watchdog group Open the Books…

Hmmm… $855,000 in Glock 19 pistols? Assuming a generous bulk discount, that’s one shiny new-issue Glock for every armed special agent. Do they put in that much time at the range that they need a new sidearm every five years?

And these are just the purchases that are on the books — wanna bet there’s also a “black budget” somewhere?

“The half-day experience opened their eyes on how to find tax fraud and just what the IRS can do to find and prosecute criminal financial evasion,” says the university’s description of the video on YouTube.

But no, it wasn’t all about boring green-eyeshade accounting stuff. The highlight was a mock takedown of a suspected tax evader… 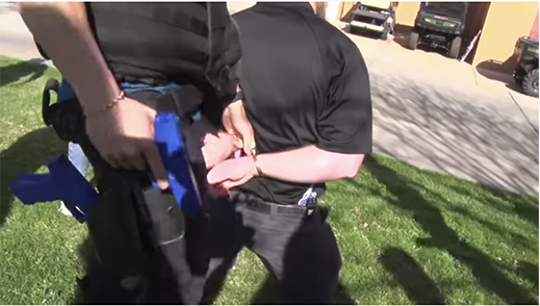 Points for realism: The mock “bluegun” there looks like a Glock 19[Utah Tech University screengrab]

“In the scenario shown on the video,” says the Daily Caller, “the suspected offender was the owner of a landscaping business who allegedly bought vehicles with funds not reported as part of the business.”

Doesn’t send a very reassuring message, does it? 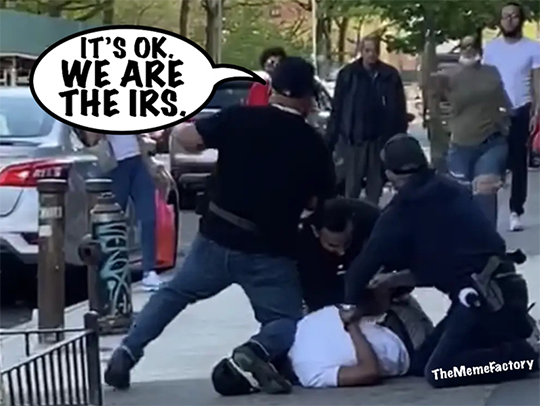 Bottom line: The new hires “will not primarily audit the rich and large corporations that are already heavily audited and who have the lawyers and accountants needed to fend off IRS attacks,” says Jim Rickards.

“Instead, these agents will be deployed against small businesses, professionals such as lawyers, doctors and consultants, entrepreneurs who do business as LLCs, farmers and others who may be successful but not super-rich.”

The U.S. stock market is recovering yesterday’s losses — although it’ll be a much tougher climb to make up for last Friday’s losses.

Bonds continue to sell off, pushing rates up. The yield on a 10-year Treasury is at a six-week high of 3.1%.

The big economic number of the day is durable goods — sales of anything designed to last three years or longer, be it a washing machine or a guided missile launcher. The July figure was pancake-flat, in contrast with expectations for a 0.5% jump.

But the number is skewed by two notoriously volatile sectors — aircraft and military hardware. Strip those out and the “core capital goods” number jumped a respectable 0.4%. Orders jumped for fabricated metal products, machinery, computers and electronic products.

Bureaucrats gone wild, homelessness edition: The city of North Las Vegas has demolished a community of tiny houses built for the homeless because of, what else, building codes.

Volunteers with the nonprofit outfit New Leaf Building Community threw up some very basic structures on a property purchased by New Leaf — four walls, a window, a front door that locks.

No water, no sewage, no heating or cooling — but that wasn’t the idea: “They had a tiny home where they could lock the door, so then they could actually go out and get services without having to worry about getting your things stolen or anything like that,” New Leaf founder Joseph Lankowski tells Las Vegas’ ABC affiliate. 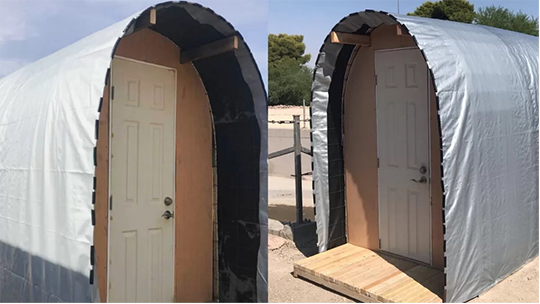 No, it didn’t meet code. The land is zoned for single-family homes, minimum 1,200 square feet. Lankowski decided it was better to beg for forgiveness than ask for permission.

Alas, it didn’t work out. “Now I sleep on the damn sidewalk because of this!” a former New Leaf resident tells the TV station.

“The government seems to be making the perfect the enemy of the good here,” observes Reason writer Elizabeth Nolan Brown.

But New Leaf isn’t giving up: “We can’t be stopped!” said a recent Instagram post inviting volunteers to build more tiny homes on the site.

To the mailbag, and the Federal Reserve: “When it comes to the financial press attributing every otherwise unexplained blip in the markets to reactions to upcoming or just-occurred Fed meetings, statements or speeches, the vomiting emoji would come in handy.

The 5: Amen. This entire Jackson Hole thing coming up on Friday is so ridiculous. On our Wednesday conference call today, James Altucher’s lead stock-market analyst Bob Byrne reminded us that no one cared about Jackson Hole until 2010.

Why then? Well, that has to do with a Frankenstein monster the Fed created quite by accident — a story I told in The 5 during the run-up to Jackson Hole three years ago. Still worth a read.

And more about the IRS: “The plan to use more agents to crack down on tax cheats is draconian. Here is a modest proposal that would actually help.

“The IRS should figure the federal income tax owed by all citizens automatically, then send a detailed report with a refund check or a bill to everyone. After all, they already get all the financial documents and (presumably) know all applicable implemented regulations.

“This way only folks who disagree with the yearly report would have to file a 1040 tax return. This would likely satisfy most average folks, and also reduce the investigative burden and the need for so many extra agents.”

The 5: Impossible given the complexity of the tax code. How, for instance, would the IRS know you put in solar panels this year and are thus entitled to a handsome tax credit?

And that’s a nuance for someone who’s a W2 employee with a simple return. Once you get into the realm of small business and the self-employed, the complexity grows by an order of magnitude.

The only way the IRS could have a handle on all your relevant transactions is via the total-surveillance vehicle of a central bank digital currency. Yeah, we know, they’re working on that…