A Trial Run for “Biden Bucks”

“Hecklers and harassers are likely to find themselves in hot water soon as they may get their national identity cards blocked and will be unable to operate their bank accounts,” according to a recent story in The Nation, an English-language daily newspaper in Pakistan.

After Canada last winter, it appears Pakistan is the next place to experiment with “financially canceling” people — but with a creepy digital twist.

Now the country’s interior minister is talking openly about using those tools to punish supporters of Imran Khan — a cricket legend who became prime minister in 2018, only to be forced out by a no-confidence vote last April.

We can’t vouch for the authenticity of this tweet — but if genuine, it would seem the pushback against these measures is considerable… 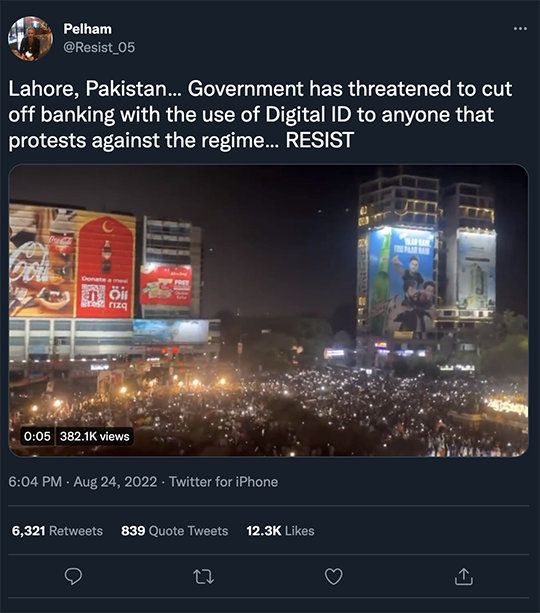 “Protests” is too strong. Again, the focus appears to be on “heckling and harassing” conduct — whatever that means. As we understand it, the precipitating incident was a Khan supporter interrupting the restaurant meal of a politician from the ruling party.

At least there would be a court process — which is more than the Canadian truckers got before they were “de-banked.”

If all of this strikes you as another portent to a central bank digital currency — the sort that Paradigm Press’ Jim Rickards has warned Americans about all summer — well, you’re right.

The good news is that if the consent of the governed still means anything, a CBDC will have a tough row to hoe in the United States.

In January, the Federal Reserve issued a white paper exploring a CBDC — and opened a public comment period.

As of late last month, 2,052 comments had been submitted. Cato Institute scholar Nicholas Anthony took it upon himself to pore over all of them. His conclusion: The comments run almost exactly 2-to-1 against. 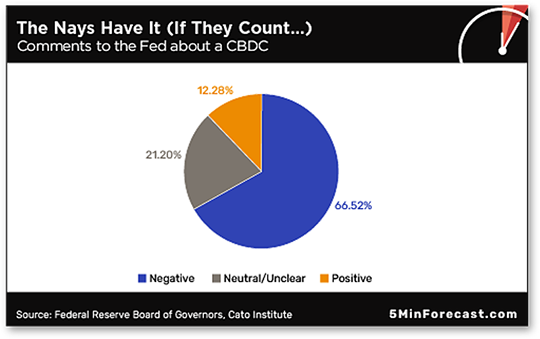 “The most common concerns,” Anthony writes, “were over financial privacy, financial oppression and the risk of disintermediating the banking system.”

The percentage of negative comments grow even larger — to 71% — if you throw out comment pages that were blank and likely submitted in error, plus a couple dozen comments from companies explicitly trolling for government contracts to implement a CBDC.

Heartening, yes… but as we’ve suggested in the past, the time for the powers that be to impose a CBDC is not a time like now, when everyday life and commerce are still functioning “normally,” if barely.

The time is during a crisis when everyone is scared out of their wits. British behavioral scientist Patrick Fagan posited such a scenario on Twitter just yesterday… 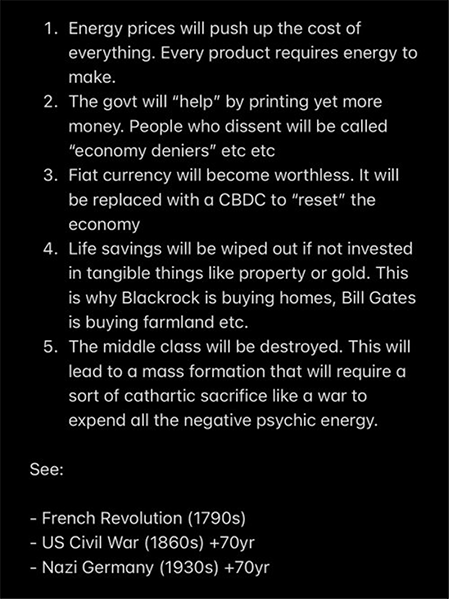 Plausible, right? If you haven’t taken Jim Rickards’ warning about “Biden Bucks” to heart — maybe you want to start now?

So about those soaring energy prices: We’re just getting started…

“Stand by for massive energy price increases in the USA,” warns an email from Byron King, our man with a pulse on the global flow of energy.

Byron points us to a seemingly innocuous article at the Rigzone website: The big pipeline firm Energy Transfer has just entered a 20-year deal to supply liquefied natural gas to Shell via a terminal on the Louisiana Gulf Coast.

Twenty years? “So I guess the world won’t be all-renewable-energy by then,” Byron snarks.

But here’s the point, one that will be highly relevant this winter not just to Europeans but to Americans: Natural gas is quickly becoming a global market like oil.

Until very recently, transport of natural gas was limited mostly to pipelines — which made it at most a regional thing, maybe a continental thing. Shipping it over the ocean requires…

For a long time, and for reasons you can readily understand, LNG was much more costly than plain ol’ natgas in a pipeline.

Then Russia invaded Ukraine… Western governments imposed sanctions on Russia… and European leaders committed themselves for better or worse to a crash program of swearing off Russian gas imports.

At the same time, Asian customers are also stepping up for imports of American LNG — setting off a bidding war with the Europeans.

If you suspect all these LNG exports overseas will end up making your own natgas more costly here at home… you’re absolutely right. “When you heat your house,” says Byron, “you are now competing with Rotterdam and Shanghai.”

This is your new normal. “Exports of LNG from the United States are locked up for three years,” Byron adds. “Not a molecule to spare. Blowback to the U.S. will drive winter heating costs through the roof.”

➢ About that three-year timeframe: Is the following mere coincidence? When the White House announced its latest military aid package to Ukraine last week, it included weapons that, according to RealClearDefense, “won’t be available via defense contractors for at least three years.” So much for a quick victory by either side.

But hey, for the time being at least you haven’t been de-banked and you can still pay your energy bills. Well, assuming you have the ready funds, of course…

In the shorter term, energy prices are shooting higher as a new week begins.

American natgas prices are up 2% on the day. At $9.50 per million Btu, we’re nearly back to last week’s levels — which were the highest since 2008.

Oil is up even bigger, 3.5%, to $96.33 a barrel. That’s a level last seen at the start of this month. We don’t see any news that serves up an obvious explanation.

As for stocks, Friday’s ugly reaction to Federal Reserve chief Jerome Powell’s big speech is dragging into today: The Dow is off another two-thirds of a percent, clinging to the 32,000 level. The S&P 500 is off three quarters of a percent to 4,026. The Nasdaq is down 1.25%, cracking below the 12,000 mark.

“No, the bear market for speculative tech stocks is not over,” says Paradigm’s value-minded Zach Scheidt.

After a fun summer fling for the likes of Tesla, Zoom and Roku, Fed chair Jerome Powell delivered the bad news on Friday: There’s no “pivot” to looser monetary policy on the horizon.

Reminder: Rising interest rates are kryptonite to speculative tech stocks. First, many of these companies rely on low-interest debt to fund their operations. And second, money managers take a good hard look at those companies’ future cash flows — and often find them wanting compared with a safer asset like a Treasury bond.

Those three stocks we mentioned a moment ago are the top three holdings in the ARK Innovation ETF. ARKK took a 6% spill after Powell’s speech Friday… and it’s down another 1% as we write today.

“Don’t get caught buying the dip in these stocks — at least not yet,” Zach warns. “Instead, consider investing in two of the best areas of the market right now.”

The other is defense. Between U.S. aid for Ukraine… an expanding U.S. commitment to defend Taiwan… and U.S. saber-rattling against Iran… well, “the U.S. government is likely to keep spending money on missiles, tanks, airplanes, drones, intelligence equipment and much, much more.

“That means we can expect higher profits — and higher stock prices — for many of the companies in the defense sector.”

Before we get to the mailbag, allow me to share a couple charts I wish I could have tracked down the other day when discussing the costs of higher education and health care… 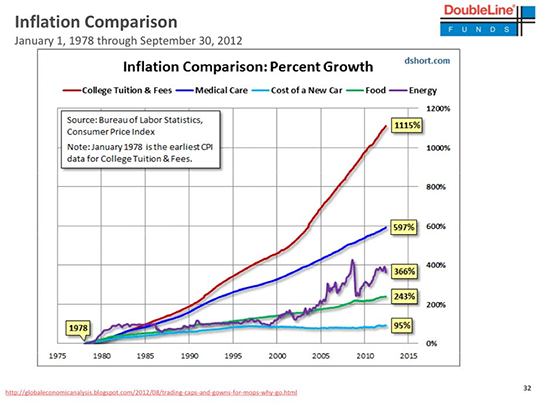 This first one comes by way of DoubleLine Capital and Advisor Perspectives. Alas, it’s now a decade old. The other one — from Mark Perry at the American Enterprise Institute — is much more recent, more detailed and uses the year 2000 as a starting point. 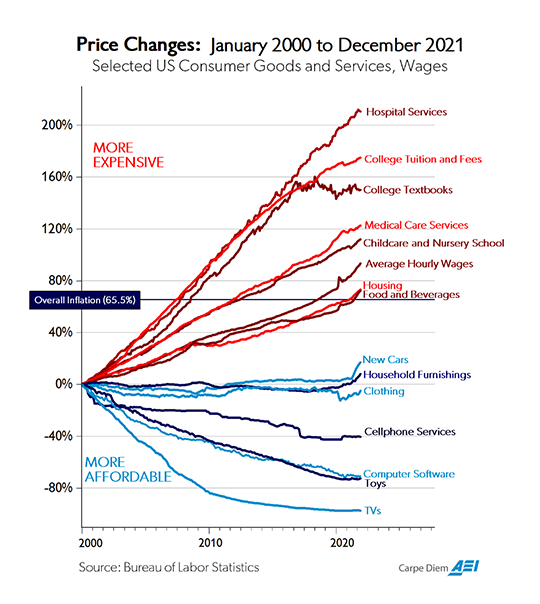 Higher education and health care: The two things that government has subsidized the most… mucked up the most… and made ever more inaccessible to the middle class.

“Thanks for publishing my ‘modest proposal,’” writes the reader who suggested last week the IRS figure out everyone’s income taxes and send either a bill or a refund accordingly.

“It’s a total pipe dream, a satirical view of a future complaint in the vein of ‘throw a bone to us peons.’

“First, today, it would help almost no one as everyone has to file form IRS 1040 and associated paperwork for some reason or another, and corporate types get a cut along the way (e.g. financialization).

“Secondly it implies an ultra-large data-mining surveillance state, possibly along with CBDC, UBI and a total fascist takeover of government. Considering the current political environment it may not be impossible but it’s fantastical to even contemplate. The elites like the way things are and profit handsomely.

“The scary thing is how the convenience of it would make compliance fairly easy.

“Love you guys — so much in The 5 today, is this one of those times where decades happen?”

The 5: Pretty much. The Lenin quote is “There are decades where nothing happens and there are weeks where decades happen.”