You can read a lot of smart takes out there on Joe Biden’s forgiveness scheme. But one phenomenon that doesn’t get enough emphasis is this — spotlighted by independent journalist Michael Tracey. 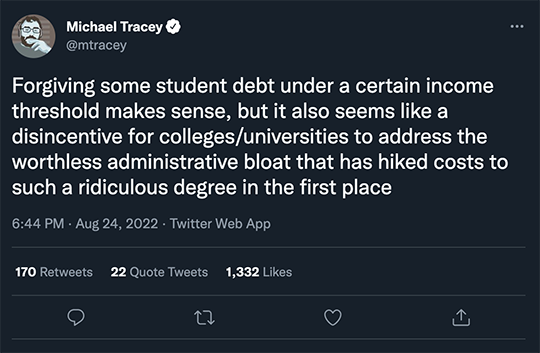 If you disagree with the first part of his sentence, don’t let that get in the way of absorbing the second part.

It comes back to the old economic maxim: “Whatever you subsidize, you get more of it.”

First-order result: According to a Georgetown University analysis of government figures, college costs grew 169% from 1980–2019 — while the average earnings of workers age 22–27 grew a mere 19%. And yes, both of those figures are after you adjust for inflation.

Second-order result: the bureaucratic bloat to which Mr. Tracey refers — the legions of associate deans, vice chancellors and assistant provosts whose jobs didn’t exist 30 or 40 years ago.

And now Uncle Sam is going to spend at least $300 billion of money he doesn’t have — we’ve seen credible estimates running as high as $600 billion — to keep the whole scam going.

After all, the scam was in danger of falling apart thanks to COVID. Why the hell would you drop five figures a year on an “education” in which — as was the case on many campuses in early 2022 — you’re taking crappy Zoom classes while confined to your dorm room, even though the entire student body is vaxxed and boosted?

And so it goes with health care. Health care in these United States cost $147 per person in 1960. The advent of subsidies grew that number by 2018 to $11,172. After adjusting for inflation, that’s still a staggering 795% increase.

Obamacare was, first and foremost, a way to keep the whole scam going for the benefit of the insurance/hospital/pharma complex.

Rewind to Barack Obama’s address to Congress, pushing for passage of the bill in 2009.

“There are those on the left who believe that the only way to fix the system is through a single-payer system like Canada’s, where we would severely restrict the private insurance market and have the government provide coverage for everyone. On the right, there are those who argue that we should end the employer-based system and leave individuals to buy health insurance on their own.”

He told free marketeers and socialists alike to go pound sand. Either approach “would represent a radical shift that would disrupt the health care most people currently have.” Translation: There was too much money in it for vested interests.

As we’ve mentioned now and then, Obamacare’s primary architect was named Elizabeth Fowler. She was a VP for the insurer WellPoint before joining the staff of Sen. Max Baucus (D-Montana), where she drafted much of the bill.

Once it became law, she became the Obama White House’s point person for implementation… and when her work was done, she went back through the revolving door and ended up at Johnson & Johnson. 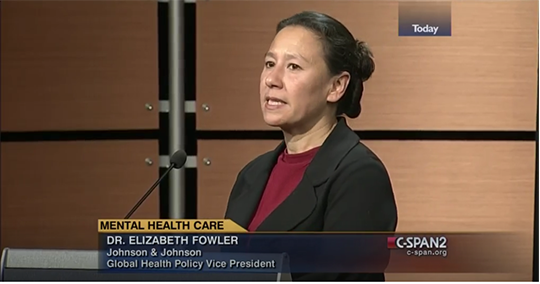 Elizabeth Fowler: One of many reasons we can’t have nice things

Bonus points: We didn’t know it until today, but she also helped draft the Medicare prescription-drug boondoggle under George W. Bush in 2003. These days, she’s back in government, with a gig at the Center for Medicare and Medicaid Services, because of course she’d be.

Near as we can tell, there’s no singularly villainous figure like Fowler whom we can hold responsible for student loan forgiveness. Perhaps one will emerge in the fullness of time. 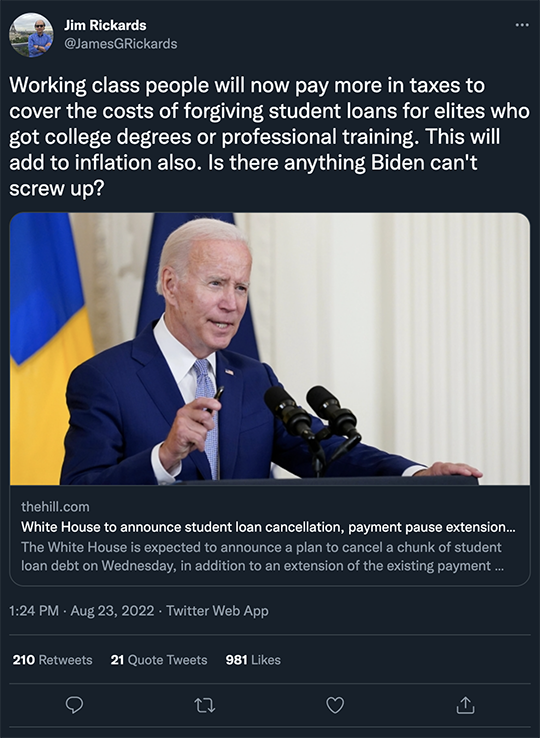 If you’re outraged, we understand. But we also urge you not to expend mental energy on events that are outside your control.

Better to focus on what you can control. If you’re going to end up paying for student loan forgiveness via taxes and inflation, you need to juice your portfolio to make up for what Uncle Sam is extracting from your pocket.

As it happens… only a short time ago Jim Rickards revealed his all-new trading system whose origins can be traced back to his work with the CIA during the early 2000s. It unearths insider activity that clues you in to massive gains whether the broad market is going up, down or sideways.

You can access the instant replay at this link right away.

The markets are in a state of suspended animation before Federal Reserve chair Jerome Powell’s much-ballyhooed “Jackson Hole speech” tomorrow.

What a difference a year makes: A year ago, Powell’s big speech averted any sort of Wall Street tantrum — he promised to start reducing the Fed’s balance sheet before year-end, but ruled out any increases in short-term interest rates because he believed inflation was still “transitory.”

Now? As we’ve said since the start of 2022, the Fed no longer has the stock market’s back. Getting inflation under control is the higher priority. A near-zero fed funds rate six months ago is now north of 2.25%.

What might Powell say tomorrow that he’ll want us to forget a year from now? Heh…

Never underestimate the entrepreneurial spirit of the Chinese… 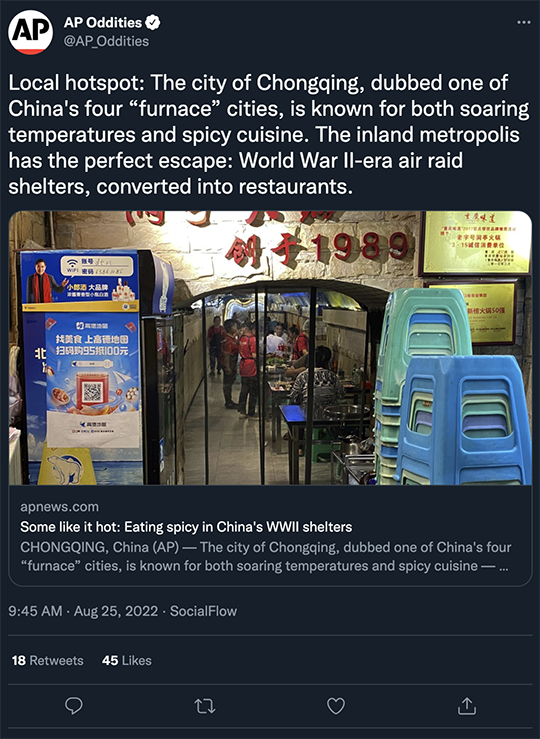 For decades now, some of the World War II air-raid shelters in Chongqing have served as underground restaurants — cool refuges from the summer heat, especially during a record heat wave this year.

“Chongqing,” says an Associated Press dispatch, “is known for both soaring temperatures and spicy cuisine — notably its hotpot, a peppery bubbling tabletop broth into which diners dunk bite-size pieces of food to cook and eat.”

Says one diner, “It’s cool in here, a good place to stay in summer.”

That’s assuming the authorities allow the “cave hotpots” to stay open under their draconian zero-COVID policy.

Right now it’s not looking good: “The Chinese metropolis of Chongqing has rolled out mass COVID testing in its central area amid a record heat wave,” says CNN, “leaving millions of residents standing under the sun for hours as they struggle with extreme temperatures and power shortages.” Sheesh…

“Geez, Dave,” a reader writes after yesterday’s edition, “you clearly have a mad on for the IRS. (Me thinks you do protest too much.) Have you had personal experience? Someone in the family, maybe?

“At the risk of playing devil’s advocate, you shouldn’t blame IRS employees for trying to interpret and administer a complex creature of Congress. You need to reset your sights on the authors of the code.

“And FWIW, I thought the writer’s suggestion about optional returns for filers who disagreed with the IRS findings was a good one. And your reply, equally cogent. Congress is bipolar when it comes to simplifying the tax code and goosing the economy with tax incentives. The solution for that is the same as it for many other federal inequities: term limits and campaign finance reform. Yeah, right!

The 5: We get where you’re coming from… but it’s a slippery (and very steep) slope from “Don’t pick on the poor IRS personnel” to “They don’t make the laws, they just enforce them.” If you wouldn’t buy that excuse in other contexts, why would you when it comes to the accursed income tax?

As for the dogs, it was a mystery for a couple of days but researchers at Michigan State have settled on parvovirus.

“It might behoove the IRS to hire an agent or three who isn’t intimidated by a paper return,” another reader writes. “They try to encourage everyone to file electronically, and then present an electronic system that only can accommodate the most basic vanilla return.

“I stick by my comment the other day about the lack of overall quality in the IRS agent ranks, and suspect most of them are intimidated by multipage returns. I filed my 2020 return over 16 months ago, and its status has been ‘still being processed’ for over a year. No communication, no requests for additional information, nothing.

“Do I believe someone has been hard at work diligently going over my return all this time? No. More likely, someone has been ignoring it, hoping it will disappear overnight because it’s too long and stressing them out. I think I actually would welcome a new agent who could fill this current competency void.”

The 5: That’s quite the conundrum: Usually one does not want government agencies to operate efficiently, but then when it’s your own money in limbo…

“Yesterday’s 5 underscores the profound depth of the transition begun with pandemic response measures,” writes our next correspondent with a different angle.

“All the ‘conspiracy theorists’ who insisted that lockdowns and vax mandates were prepping us for a radical overhaul of the social order are — surprise, surprise — being proven correct on a weekly basis. There is an evident link between the Mar-a-Lago raid, mushrooming online censorship and this ‘Inflation Expansion Act’ provision.

“All market and investing considerations aside, this is clearly a time when the prudent must make adjustments in how we organize our lives. The storm is coming. Batten down the hatches.”

The 5: As long as you brought it up, we can’t help musing for a bit on this headline… 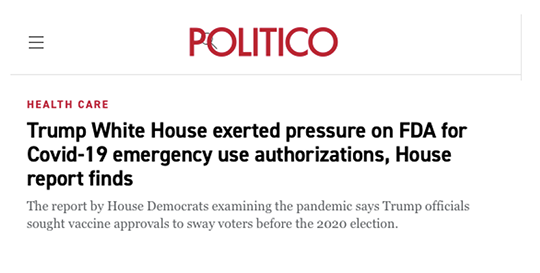 We don’t doubt the Democrats’ findings here. It’s just passing strange that Democrats are adopting the line of “Trump rushed this vaccine through” when not so long ago the Dems themselves were so keen to impose this very vaccine on people — even denying them employment if they didn’t comply.

Then again, the interesting Substack writer known as “El Gato Malo” saw it coming in a piece just yesterday: “Post midterms, ‘This was all Trump’s fault’ is going to become the grand unifier of the lockdown left… when you’re in a tough spot, you go with what you know and if there is one thing this gang knows, it’s ‘always accuse the other side of that which you are doing.’

“And that’s where they’ll go. Because they have A LOT to explain.

“The shift from ‘Your failure to obey and comply killed us’ to ‘Why did you make me obey and comply, you fascist!’ is going to be a hullva thing to see.”

The writer goes so far as to say the vaccine makers will be thrown under the bus before all’s said and done.