Leaders of the G7 countries are doubling down on the stupid. Hot off the Twitter feed of Paradigm Press’ own Jim Rickards this morning… 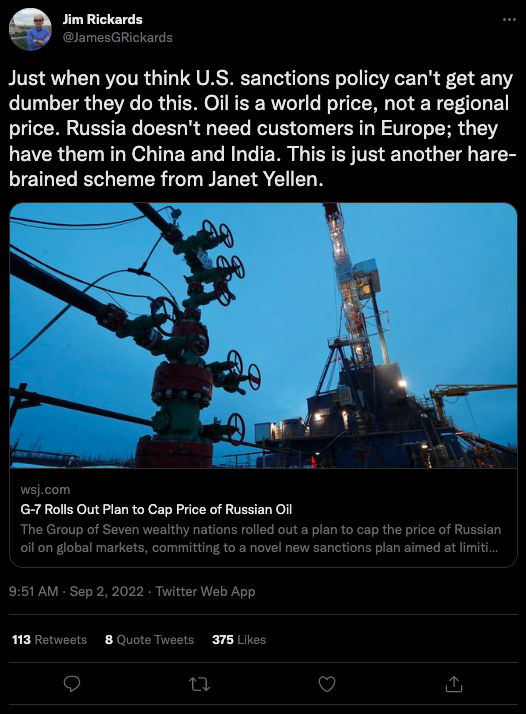 So let’s unpack this “harebrained scheme” for a moment — because it’s been in the works since May and now appears to be coming to fruition.

The idea is to limit the revenue Moscow can rake in from oil sales — which as we mentioned on Tuesday is now higher than it was before the Russian invasion of Ukraine, Western sanctions notwithstanding.

The mechanism to pull that off is, according to The Wall Street Journal, “to ban the insurance and financing of shipments of Russian oil and petroleum products unless they are sold under a set price cap.”

The only way this scheme will work is with the cooperation of several parties who have no incentive to cooperate — starting with Russia.

When we mentioned this scheme in late June, we noticed that even Establishment media can understand the problem: “The oil price cap,” said The Washington Post, “is complicated by the fact that oil is sold on the open market and Russia could look elsewhere for buyers.” Hello, China? Hello, India?

And why would Moscow want to sell its oil at a price set by its adversaries, anyway?

But it’s more than that. Moscow has already suggested that if Western insurers drop coverage, the Russian government will step in with its own guarantees.

The insurers themselves are skeptical: “We can ask to see evidence of the price paid, but as an enforcement mechanism, it’s not very effective,” says Mike Salthouse of The North of England P&I Association Ltd. “We’ve said it won’t work,” he told The New York Times last month. “We’ve explained to everybody why.”

Worst-case scenario: Russia retaliates by cutting oil production. Mainstream analysts from the likes of JPMorgan Chase have said that step could drive up oil prices from their current sub-$90 levels to as much as $190 — or in an extreme situation, a “stratospheric” $380.

“Europe has made so many really, really bad energy decisions over the decades in terms of how they feed energy into their industrial complex,” says Paradigm’s energy expert Byron King.

Yesterday, Byron joined Jim Rickards along with Jim’s senior analyst Dan Amoss for an 80-minute deep dive into the European energy crisis — and how it’s certain to blow back on American businesses and consumers. (You can watch the whole thing right here.)

The natural gas situation is even more dire than that with oil, says Byron: “Right now, the German chemicals industry, the fertilizer industry in Western Europe — they’re done. They’re shut off. It’s just a total mess. They’re gonna pay through the nose for whatever energy they can get.”

And no, liquefied natural gas from the United States won’t save the day. As of a week ago, Byron says there was only one LNG tanker available for hire anywhere in the world.

And it’s not as if manufacturers can build more with a snap of the fingers. “Daewoo, the Korean shipyard company? They’re booked until 2027. Do the math. That’s five years out. Every berth, every design, every welder, every piece of steel is booked for five years.”

[Just in before our virtual presstime: Moscow says it’s shutting off the European Union’s gas supply via the Nord Stream 1 pipeline “indefinitely.”]

You can’t make fertilizer without natural gas, and “fertilizer is the major input to agriculture,” Jim Rickards reminded the audience.

In addition to skyrocketing prices, “you have transportation bottlenecks, shipping bottlenecks. Well, guess what? A lot of farmers around the world can’t get fertilizer, or if they get it, they pay three or four times the price they did the year before.”

Awful as all of this is, there is an investment angle. Starting with the fact fossil-fuel stocks are still cheap.

Sentiment among institutional investors is still lousy according to Dan Amoss — who cut his teeth in that world and still keeps up with former colleagues.

“These committees move very slowly,” Dan explains. “They haven’t really reacted to this higher average oil and gas price environment.” In fact, the consensus among fund managers is that energy prices are still destined to return to pre-pandemic levels.

“So I would say, if you can handle volatility there’s a lot of opportunity in oil and gas stocks.” And on the flip side, “there’s still a lot of vulnerability in consumer discretionary stocks.”

We can devote only a chunk of our 5 Mins. to all of the insights that Jim and Dan and Byron served up yesterday. You’ll benefit most from the full 80-minute discussion — which you can watch for yourself at this link. If you don’t have time now, save the link and you can watch anytime over the long weekend.

To the markets, where the chatter is about the August jobs report — not that it makes any difference to the Federal Reserve’s intentions anymore.

The wonks at the Bureau of Labor Statistics conjured 315,000 new jobs — more than expected.

However, the official unemployment rate edged up from 3.5% to 3.7%. That’s because more people are re-entering the workforce — either working or looking for work. Seems working-age folks have long exhausted the savings from their stimmy checks… while folks who chose to retire in 2020 are finding their incomes can no longer keep up with inflation.

The real-world unemployment rate from Shadow Government Statistics — reflecting part-timers who want full-time jobs and people who’ve just plain given up looking for work — ticked up to 24.6%. That’s the same as it was six months ago.

Again, none of this makes any difference to the Fed. In the past, a “decent” jobs report like this one amounted to bad news — because it meant the Fed would be more inclined to stick with tight monetary policy. But at the moment, the Fed is determined to get inflation under control no matter what the job numbers are doing.

And with that, the stock market is staging an end-of-the-week rally. All the major U.S. indexes are up 1% or maybe a tad more.

The S&P bounced smartly off the 3,900 level yesterday — significant, says Paradigm’s trading guru Alan Knuckman, because 3,900 marks the halfway point between the June lows and the August highs. “If that can hold as a support level,” he told readers of The Profit Wire yesterday, “then that would be a series of higher lows and stocks could surge once again.”

The only news of the day worth keeping an eye on is another lockdown in China after a minor spike in COVID cases — this time in Chengdu, population 21 million. We understand industrial exports from Chengdu have already ground to a halt.

Our quest for quirky happenings in the world of money and commerce takes us to Baltimore — indeed to a spot nine short blocks from Paradigm Press HQ. 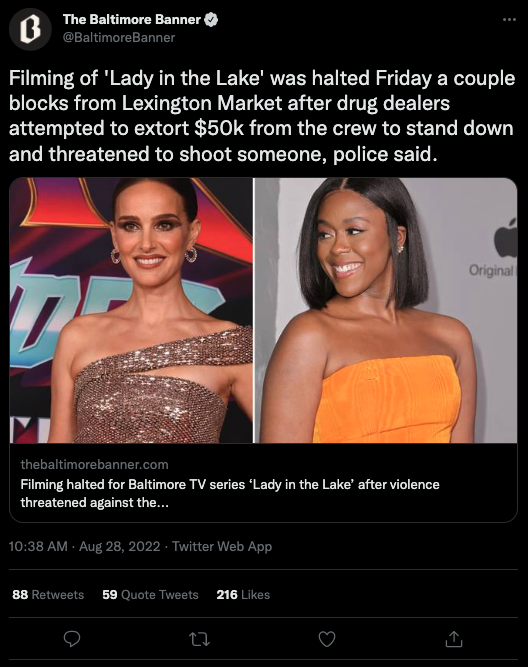 So yeah… The initial story was that an Apple TV+ series starring Natalie Portman found itself on the receiving end of a demand for protection money.

Police said a group of “locals” warned the producers last Friday to stop filming — or else they’d come back in the evening and “shoot someone” unless they were paid $50,000. The production company said two men brandished a gun at a driver who belonged to the crew.

“The leaders of the production decided to err on the side of caution and reschedule the shoot after they found another location,” says a police spokesman. Filming then resumed with extra security.

Quality reaction from the Baltimore Reddit board: “Did these drug dealers think that the production crew of a TV show has $50K in cash laying around or did they expect the producer to Venmo them the $50K?”

With the passage of a few days, and a police review of security camera footage, it turns out the story isn’t quite as outlandish as it sounded at first.

Police say a street vendor was upset that the shoot was costing him business. He denies having a weapon or making threats; the cops picked him up on a drug charge.

Bonus points for irony: The series being shot in Charm City, Lady in the Lake, is adapted from a novel by Laura Lippman — the wife of David Simon, creator of The Wire.

Except this incident — however it went down — is so wacky it would have never made it into a Wire script.

“I have long been a proponent of the fair tax,” writes a reader of a national sales tax — “as I consider any tax on income (a preemptive claim on the fruits of one’s labor) tantamount to slavery, or at best feudalism.

“There is one point that concerns me, though. What is to stop the guv’mint from increasing the sales tax rate as much as they want whenever they need to… um, ‘reduce inflation’?

“Look forward to The 5 every day!”

The 5: “The problems with the FairTax are legion,” wrote Laurence Vance of the Mises Institute years ago — starting with the fact the suggested 30% rate wouldn’t be enough to equal the revenue from all the current federal taxes.

Worse, “there is nothing to prevent an income tax from being reinstituted, giving us a two-headed hydra of an income tax and a consumption tax.”

So before you ever got to a FairTax, you’d have to repeal the 16th Amendment. Good luck with that…

“Your reader who mentioned the Forbes Flat Tax proposal reminded me of a postcard my late CPA father had in his office for years.

“I went online looking for it and found it has its own meme. If you choose not to publish I understand, for as you are fond of saying, ‘Don’t give them any ideas.’ 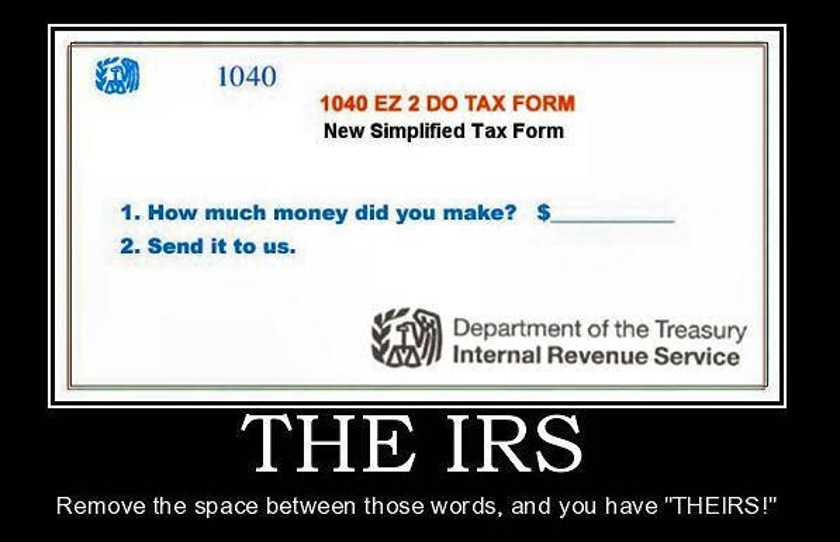 The 5: In this case, there’s probably nothing to worry about — that gag’s been around forever.

The late Jeff MacNelly did a couple variations over the years, first for The Richmond News Leader and later for the Chicago Tribune.

MacNelly died more than 20 years ago, but we’d still just as soon not run afoul of any copyright lawyers — and so we’ll link to it rather than reproduce it in this email. Besides, it’s best viewed on as big a screen as you’ve got.

P.S. We’re back as usual tomorrow with our Saturday wrap-up, 5 Things You Need to Know.

U.S. markets are closed Monday for Labor Day, so the weekday edition of The 5 returns Tuesday.