It’s Not ALL Bad News (Energy)

It took more than six months… but oil prices have slipped to their lowest levels since Russia invaded Ukraine.

At last check, a barrel of West Texas Intermediate is down over 4% to $83.16. Brent, the global benchmark, is down nearly 4% to $89.20. If the OPEC+ nations intended to set a floor of $90 Brent with their latest production cut… it isn’t working.

The mainstream chalks it up to “demand fears stoked by looming recession risks and downbeat Chinese trade data” (Reuters). Then again, oil futures are notoriously subject to manipulation… and in recent months the price of futures has often been lower than that of physical barrels for delivery.

For the balance of September, “Oil prices will trade in a sideways pattern with a slight downward bias,” ventures Paradigm Press Group’s own Jim Rickards.

Declining demand? Yes. Along with the fact that the proverbial summer driving season has wound down and we’re now in what energy traders call the “shoulder months.”

“The market will need to see further evidence of a worsening economic recession before taking the next leg down,” says Jim. “The gloomy economic outlook is offset somewhat by supply concerns relating to Russia and continued attacks by the White House on the U.S. oil and gas industry.”

“This trend of higher oil prices beginning in October should continue until March 2023 [back to the shoulder months] at which point better weather and worse economic output may combine to cause prices to decline again.”

Europe, of course, is in much more dire straits. Western economic warfare against Russia, and Russia’s response of choking off of European gas supply, has resulted in a year-over-year price jump on the order of 700%.

Bearing in mind what we said last week about how natural gas is steadily becoming a global market like oil, “no region or country is immune to the price increases in Europe,” Jim avers.

“China is buying all the natural gas it can. Qatar has limited additional output and is working on long-term deals with China. Russia and Iran are forming a new natural gas cartel similar to OPEC.”

Thus, “We should expect steep price increases and periodic shortages in the Northeast U.S. this winter.”

The only thing that would change that calculus is peace in Ukraine and an end to sanctions. “That seems unlikely in the short run,” Jim concludes. “Even if it happens, it will take months for moderate prices to feed through the supply chain.”

Meanwhile, stand by for a wild card that could upend energy markets big-time.

Remember how the Biden administration is draining the U.S. Strategic Petroleum Reserve? In the absence of a true “emergency,” America’s emergency stockpile in the salt caverns of Texas and Louisiana is down to its lowest levels since the late 1980s.

Last month, the White House started leaning heavily on U.S. refiners to dial back their exports of gasoline, diesel and jet fuel — seeing as inventories of these refined products are well below normal, especially on the East Coast.

For now, compliance is voluntary. “It is our hope that companies will proactively address this need,” said Energy Secretary Jennifer Granholm in a letter to refinery CEOs.

Amid a bounty of American-made shale energy, the Obama administration lifted a decades-long ban on oil exports in 2015. And as enthusiastic as Dan is about many energy firms, the prospect of an export ban makes him skittish about the big refiners like Valero and Marathon.

“The day a potential product or oil export ban is announced,” Dan tells us in an email, “the refining stocks will go ‘limit down.’

“Logic, reality, microeconomics and delicately tuned supply chains haven’t stopped politically expedient decisions by whoever is running the Biden administration from their ivory tower… so there’s no reason to expect it to start now.” Heh…

And the devastation would not be limited to the energy sector, Dan warns: “This is not quite to the level of Nixon’s price control ‘boards’ — which were an unappreciated but BIG driver of the 1973–⁠⁠74 bear market — but it’s of the same flavor.”

For the moment, however, Wall Street is finally staging a bit of a rally.

All the major U.S. indexes are up between three quarters of a percent and 1%. The S&P came very close to cracking below the important 3,900 level at yesterday’s close… but as we write it’s back up to 3,942.

➢ That’s despite the Federal Reserve telegraphing its intentions this morning to raise short-term interest rates another three-quarters of a percentage point at its next meeting two weeks from today. The Fed planted a story with its preferred mouthpiece, Wall Street Journal reporter Nick Timiraos. There was absolutely no news in it, and nothing to support the assertion that a 0.75-point increase is in the bag — other than the fact the WSJ published a Timiraos story about it today. Circular, we know…
Anyway, the trade in fed funds futures this morning suggests a 78% probability of a 0.75-point increase — up from 69% a week ago. Mission accomplished.

Imagine how much more costly everything would be if we had a weak dollar right now!

Supply chain update: The nationwide rail strike we started warning about in July is fast approaching.

A 60-day cooling-off period imposed by the White House is set to expire Sept. 16 — a week from Friday. At that time, eight rail unions representing tens of thousands of workers could choose to walk out. (Five other unions have come to terms, but they’re not the big ones.)

According to The Hill, a recent poll among members of Railroad Workers United finds more than nine in 10 members are ready to strike.

If that happens, all eyes would then turn to Congress — which could appoint arbitrators or impose a settlement.

“While Democrats are closely aligned with labor unions,” says The Hill, “organizers acknowledge that they likely wouldn’t allow for an extended strike just before the midterm elections.” To be continued…

We’re about to learn exactly how much pressure the White House brought to bear on the social-media giants to exercise heavy-handed COVID censorship.

In May, the attorneys general of Missouri and Louisiana sued the Biden administration — hoping to uncover evidence that the White House was suppressing speech protected by the First Amendment, while trying to make it look as if the social-media companies were acting on their own.

As we mentioned last month, the suit was later joined by epidemiologists Jay Bhattacharya and Martin Kulldorff — co-authors of the October 2020 Great Barrington Declaration. The GBD challenged the politicized “science” behind COVID lockdowns, restrictions and mandates. Both have been subject to social-media bans. 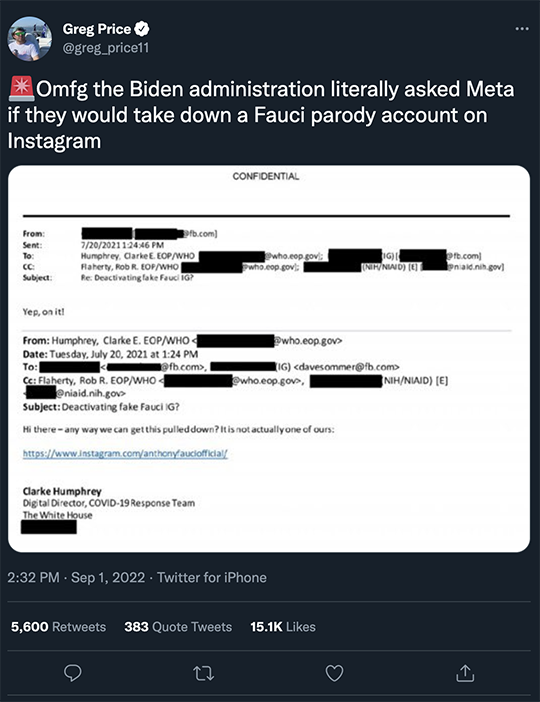 And that trickle is about to become a flood. Yesterday, a federal judge in Louisiana ordered the White House to cough up all the relevant emails from the likes of Dr. Anthony Fauci and White House press secretary Karine Jean-Pierre. They have 21 days to comply.

“It is time for Dr. Fauci to answer for his flagrant disregard for Americans’ constitutional rights and civil liberties,” says attorney Jenin Younes of the New Civil Liberties Alliance, which represents several of the plaintiffs. Grab the popcorn… 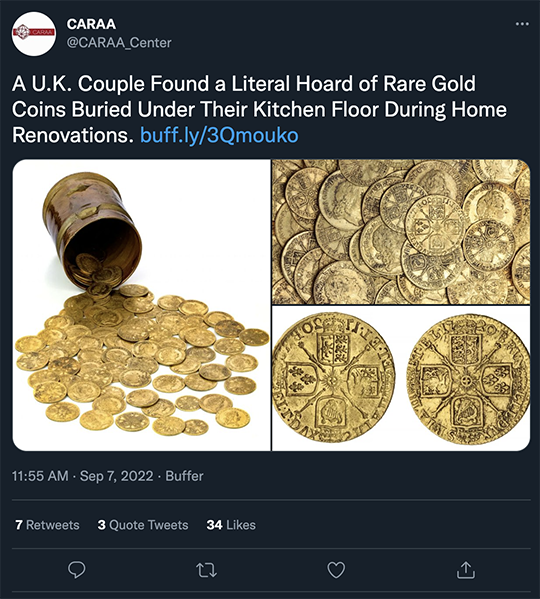 “A couple who found a stash of gold coins stretching back more than 400 years are in line for a quarter of a million pound payday,” reports the British tabloid Metro. (That’s about $288 million.)

They were having the floors redone at their home in North Yorkshire when they discovered an earthenware cup, maybe the size of a Coke can, containing 264 gold pieces.

“The homeowners discovered the coins in July 2019 and as they have now been officially disclaimed,” says the paper, “they can now go to auction.”

A highlight of the sale is a guinea from 1720 depicting King George I — except there was a mistake when the coin was struck and ol’ George is nowhere to be found. Both sides are “tails.” That one alone could fetch $4,600 at auction.

“The number of coins and unique method of burial,” says auctioneer Gregory Edmund, “presents an extraordinary opportunity to appreciate the complicated English economy in the first decades of the Bank of England [founded in 1694] and significant distrust of its new-fangled invention the ‘banknote.’”

Yep. Nothing like real wealth you can hold in your hand. Assuming you don’t forget where you stashed it, of course…

“This isn’t in response to any one particular issue of The 5,” a reader writes, “but rather to the general collective observations I’ve made over the last couple of decades.

“Does one have to be absolutely devoid of any semblance of a brain to qualify for office in this or any Western country?

“I tend to be logic-oriented, and cause-and-effect relationships (the fundamental underpinnings of the tried-and-true law of unintended consequences) are so obvious to anyone with half a brain, but so absent to the little minds of our oblivious elected officials.

“God has a plan, and clearly it involves putting the least competent in charge to run everything into the ground to give mankind what he apparently deserves. I can only sigh when I hear ‘God bless America’ anymore. Why would He?”

The 5: We won’t presume to understand all the ways of God around here. The ways of man are perplexing enough…