Rather, during an interview onsite at the auto industry event, Chinese Ambassador Qin Gang stridently warned the U.S. not to break ties with China, particularly when it comes to EV supply chains. 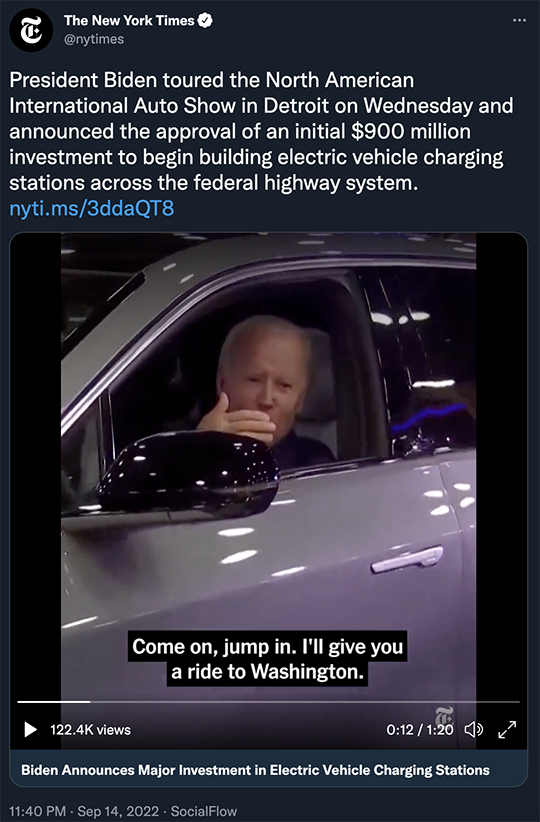 “The electric vehicle value chain, or specifically the supply chain, is very globalized,” said Ambassador Qin. “To decouple with China means to disconnect from the world’s largest market.”

But auto-centric Jalopnik points out the obvious: “The basis of the Inflation Reduction Act as it applies to EVs… the U.S. wants that to become localized supply and production.” (Recall CEOs’ favorite boardroom buzzwords this year: onshoring, reshoring and nearshoring.)

Ultimately: “China [is] mostly interested in keeping a lucrative role supplying the majority of EVs sold in the U.S. or anywhere else.”

“In China, which has carried by far the biggest load of global growth for the last 30 years,” Grantham says, “too many things are going wrong at the same time.

According to calculations by Citigroup analysts, “bad debt climbed to about 29.1% of total property loans in the first half of this year, up from 24.3% at the end of 2021,” Bloomberg says. 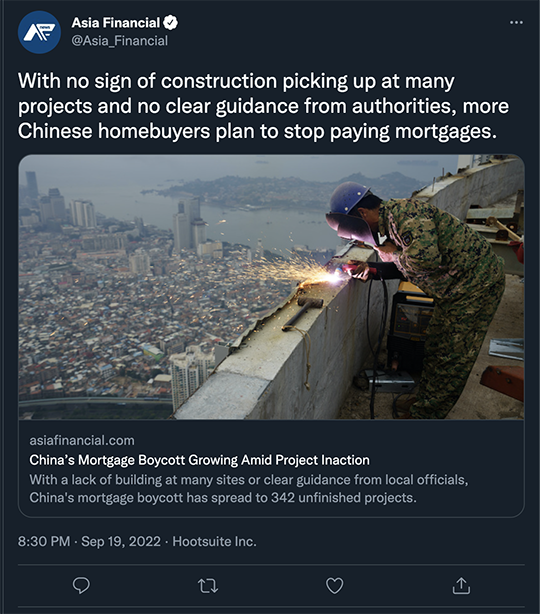 “Authorities have sought to defuse the property crisis with a raft of measures, including cutting interest rates, asking banks to meet the reasonable financing needs of developers and offering special loans through policy banks to ensure property projects are delivered,” Bloomberg says.

According to Natixis economist Gary Ng: “The government support is not strong enough to reverse the lost confidence of homebuyers from regulations and the zero-COVID policy.”

Perhaps most concerning of all? “Financial contagion has spread so far across China’s property industry that even state-backed developers are at risk of surging defaults,” says Bloomberg.

“This real estate weakness is mirrored around the world,” says Grantham, “with U.S. homebuilding for example now declining rapidly to well below average levels, as perhaps it should given the record unaffordability of new mortgages.”

Stateside, the average interest rate on a 30-year fixed-rate mortgage rose to 6.02% as of Sept. 15, according to Freddie Mac. For some perspective, that’s up from 2.86% the same week last year. Further perspective? That’s the first time mortgage interest rates have exceeded 6% — since the 2008 financial panic.

“Historically, real estate has been the most important asset class for economic stability,” Grantham says, which is why housing has been an intrinsic catalyst for financial panics.

“The current superbubble features the most dangerous mix of these factors in modern times: All three major asset classes — housing, stocks and bonds — were critically historically overvalued at the end of last year. Now we are seeing an inflation surge and rate shock as in the early 1970s as well,” says Grantham.

August housing starts came in much stronger than expected this morning, up 12.2% month over month and down 0.1% year over year. The housing surprise stems from “a jump in multifamily housing construction,” Fox Business notes.

On the other hand, building permits, an indicator of future activity, are down 10% month over month and down 14.4% from a year earlier — to a level consistent with June 2020’s reading.

If you remember, on March 8, the LME suspended nickel trading for one week because China’s nickel giant Tsingshan Holding Group, owned by the tycoon known as “Big Shot,” racked up $8 billion in trading losses after short-selling nickel futures.

When the price of nickel shot up about 250%, Tsingshan didn’t have the cash to meet a margin call. So as an exceptional courtesy, the LME literally canceled some of the trades… after they’d been executed. In other words, the LME dispatched with the sanctity of contracts in order to protect its system from blowing up.

“LME data shows many participants have abandoned the nickel market,” Reuters says, “a trend… leading to even lower volumes and more volatility as more people opt to negotiate prices directly.

“The exchange says it is working on potential improvements.” Promises, promises…

“The adage [is] to try to piggyback on the trading ideas of so-called smart money,” says Todd Rosenbluth, head of research at VettaFi. 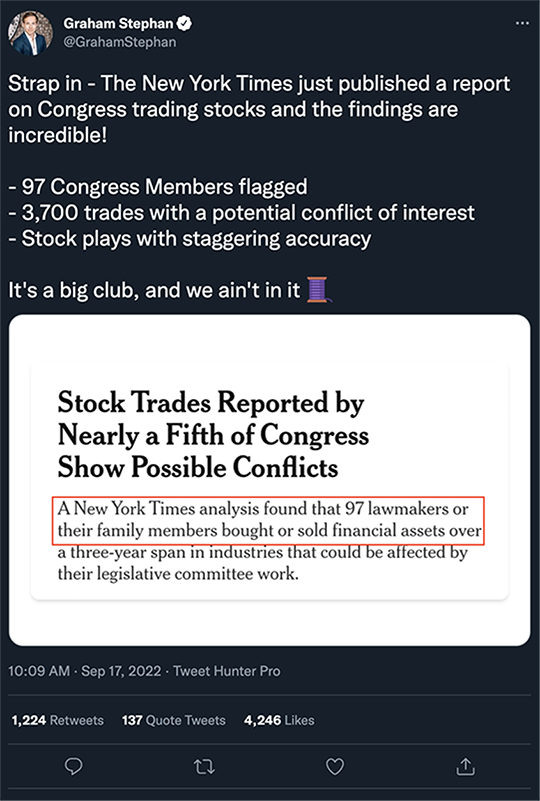 … and you can therefore tap into their potential expertise to get ahead of the marketplace.”

But that inside information would be pretty moldy by the time it trickled down to us plebes — members of Congress have 45 days to report their market maneuvers.

“Moreover,” says the FT, “there remains the possibility that stock trading by members of Congress could still be outlawed before NANC and KRUZ gain approval from the SEC.”

It was nearly five years ago we first mentioned how do-gooder Philly leaders imposed a tax on both sugary and sugar-free soft drinks. That worked out to about $1 for a two-liter bottle. Among the developments we’ve chronicled since…

“In fact, the researchers, who charmingly refer to soda as ‘soda pop,’ found the soda tax led to an increase in our purchases of high-sugar-content foods other than soda,” says Philly Magazine.

“Can we influence behavior through taxation?” the study queries. “The answer is no if you’re enacting these policies at a local level.”

But yes… “if you enact a policy at broader levels of government, such as at the state or national level, that prevents people from cross-border shopping.”

“As a Jersey guy, I appreciated [yesterday’s war on grocery bags] update,” a reader writes.

“But why do so many politicians perpetuate the myth of EVs? There appears to be a prevailing idea that the electricity to charge an EV is magic. It just spontaneously appears on the grid without adding any load, requiring additional coal, gas, oil or whatever other fuel is being burned to generate electricity.

“So much irony! Keep up the good work.”

“I’d have to advocate postal money orders for buying firearms,” says another reader about our guns-and-ammo caveat emptor yesterday.

“Seems delightfully ironic to be able to use a government agency to do something that the government now frowns upon.”

Might be a feasible workaround… Doubly so, considering you can only purchase postal money orders with cash or a debit card using your PIN — no credit cards or checks accepted.

However, “if you purchase more than $3,000.00 in money orders,” according to USPS.com, “you are required to complete a special form and produce acceptable ID.” Also? “It is the responsibility of the purchaser to enter in who the money order is payable to.” D’oh!

So just cut out the middleman: It’s still all about the Benjamins.

We’ll be back at it tomorrow; until then, take care…