“A colleague informs me that institutional traders — not mom and pop retail investors — have recently taken out over $8 billion in ‘crash protection,’” says our macro expert Jim Rickards. 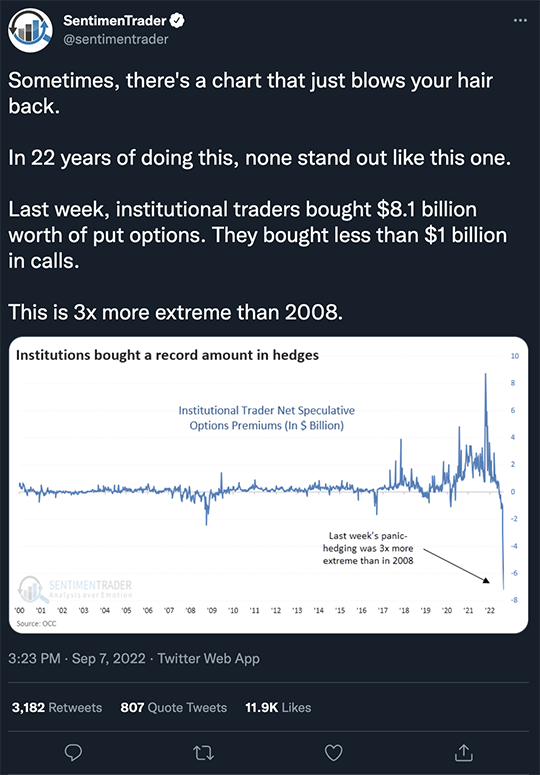 “The last time we saw such a surge in crash protection was just prior to the collapse of Lehman Bros. in 2008,” he adds.

“Again, these guys are the ‘smart money,’” Jim emphasizes. “They must know something the average investor doesn’t.

“In broader terms, could we be looking at the end of a superbubble?” Jim asks. And legendary British investor Jeremy Grantham, for one, agrees unreservedly.

The 5’s been keeping close watch on Grantham’s periodic media appearances for several years now, seeing as he’s one of the few people who’s accurately “called the top” of one bull market after another.

Grantham, for example, bailed on Japanese stocks just as they were crashing in 1990. He anticipated the dot-com meltdown in 2000.

And he was among the lone voices — along with our own firm — who said the mid-2000s housing bubble would come to its disastrous denouement.

But more recently, in an executive summary to GMO investors, published on Aug. 31, Grantham warned about this “superbubble” phenomenon.

“Only a few market events in an investor’s career really matter,” he says, “and among the most important of all are superbubbles.

“These superbubbles are events unlike any others: While there are only a few in history for investors to study, they have clear features in common.

“One of those features is the bear market rally after the initial derating stage of the decline but before the economy has clearly begun to deteriorate, as it always has when superbubbles burst…

“This in all three previous cases recovered over half the market’s initial losses, luring unwary investors back just in time for the market to turn down again, only more viciously.

“This summer’s rally has so far perfectly fit the pattern,” says Grantham.

“In 2022, at the intraday peak on Aug. 16, the S&P had made back 58% of its losses since its June low. Thus we could say the current event, so far, is looking eerily similar to these other historic superbubbles. 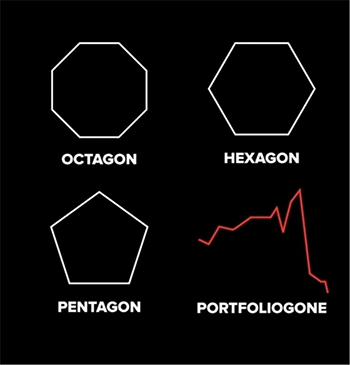 Wouldn’t be funny if it weren’t true…

“Why are the historic superbubbles always followed by major economic setbacks?” Grantham wonders.

“Perhaps because they occurred after a very extended buildup of market and economic forces — with a major surge of optimism thrown in at the end.

“The… temporary near perfection of fundamentals [and] aging cycle… leave economic and financial data with only one way to go,” Grantham observes.

In 2019, The 5 repeatedly warned we were living in the peak boom phase of the boom-bust cycle; in fact, earlier this year, we outlined how the pandemic — with all its free-flowing “stimmy” money and downright weird labor market — simply forestalled the inevitable.

Which brings us back to record-high $8 billion “crash protection”: The truism nobody rings a bell at the top isn’t entirely true.

“Sometimes,” wrote our macro expert Jim Rickards five years ago, “the global power elites do ring a bell. But they ring it for the wealthiest and most powerful individuals only.

“Everyday investors like you are not intended to hear it,” he says. “That’s why I am going directly to the public with a plan to sidestep a near-term market meltdown.”

Jim’s noticed an emerging pattern detrimental to the stock market, something that might even sink the Dow by as much as 80% practically overnight.

To fill you in, Jim went live with a briefing yesterday, in an event called American Death Angel. To watch the free, no-obligation replay, simply click this link… But it’s imperative you watch before Wednesday, Sept. 21, at 2 p.m. EDT.

The major economic number of the day comes courtesy of the National Association of Homebuilders; its housing market index came in at 46 — the second sub-50 reading in a row, suggesting home construction is contracting. And outside the corona-crash, it is the lowest number since May 2014.

“The second-largest cryptocurrency in the world, Ethereum, launched the second generation of its blockchain network just before 3 a.m. EDT on Sept. 15,” he says, in an event hyped as “the Merge.”

“If the Merge had happened last winter when crypto prices were at their peak,” James says, “I’d expect the price of Ethereum to be close to $10,000. Instead, today Ethereum can be picked up for a small fraction of that” — just over $1,300 at the time of writing.

“With the crypto markets now 9½ months into a bear market, mainstream enthusiasm and interest in crypto have dropped from the peak last year,” James says.

“I believe this is a clear case where mainstream interest is missing the bigger picture.

“Crypto is already changing the lives of many, and Ethereum’s Merge promises to accelerate that further,” James says.

“As you get into the details, it becomes very clear how crypto is already creating access to loans, investment opportunities and jobs around the world:

“Although mainstream investors might be sleeping through this once-in-a-lifetime opportunity,” he says, “my team has been watching the crypto space carefully for over 10 years.

“We believe this is one of those rare opportunities where investors will look back and think, I should’ve invested in Ethereum after the Merge.

“Based on everything we’re seeing and hearing post-Merge,” James notes, “we’re more optimistic than ever… Fortunately for you, the mainstream’s loss can be your gain.”

“Merchant category codes now exist for almost every kind of purchase, including those made at supermarkets, clothing stores, coffee shops and many other retailers,” says The Associated Press.

Previously, guns and ammo had been coded as “general merchandise.” But as a result of arm-twisting from, among others, two of the country’s most powerful public pension funds — CalPERS and The New York State Common Retirement Fund (NYSLRS) — the three credit card companies have now adopted the new International Organization for Standardization (ISO) merchant code for gun sales.

“When you buy an airline ticket or pay for your groceries, your credit card company has a special code for those retailers,” says NYC Mayor Eric Adams. “It’s just common sense that we have the same policies in place for gun and ammunition stores.”

Sure, let’s call it “common sense.”

“This assault on the firearms industry will hurt sales as most people use credit cards to make purchases,” says Alan Gottlieb of the Second Amendment Foundation. “That is what the gun prohibition is trying to do as well as create a database of all gun owners.”

When it comes to purchasing guns and ammo, then, CASH IS KING.

Which is precisely Dan Eldridge’s sentiment; he owns the Chicago area’s Maxon Shooter’s Supplies, and up until a few years ago, his store had an ATM, but he removed the machine because of exorbitant processing fees.

But after the credit card companies started flagging firearm purchases last week, Mr. Eldridge says: “My first thought was, the ATM’s going back in.

The scariest part of all this? “[The credit card company] acts as a middleman between merchants and banks,” AP says, “and it will be up to banks to decide whether they will allow sales at gun stores to happen on their issued cards.” (Emphasis ours.)

[That the new gun sales coding went into effect on 9/11 is beyond ironic since the weapons the 19 hijackers used to take control of aircrafts were box cutters and other small knives. Not firearms. Will credit card companies start flagging box cutter sales? Probably shouldn’t give ’em any ideas.]

From the war on the Second Amendment to New Jersey’s war on grocery bags: The Garden State’s ban on single-use plastic and paper bags has backfired bigly… 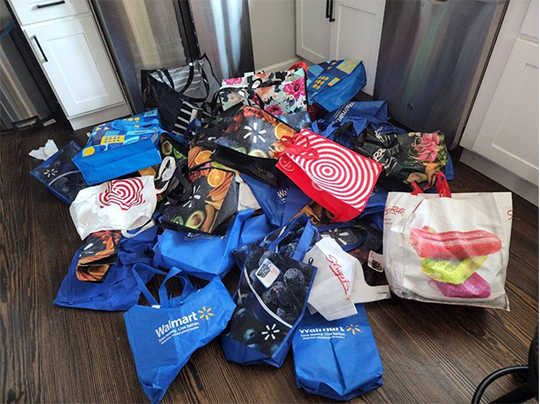 The problem is NJ consumers who use grocery delivery services are now being inundated with reusable grocery bags.

“Major grocery stores and Instacart… package online orders in a fresh set of reusable bags every time, either providing them at no cost or charging for them with each order,” says an article at NJ.com.

“What’s happening is the number of these bags are accumulating with customers,” says state Sen. Bob Smith, who co-sponsored the bill to ban plastic bags. “We know it’s a problem. We agree it’s a problem.”

But under no circumstances should New Jerseyans attempt to regularly bin these reusable bags: “Please don’t put reusable bags in your curbside bin,” sighs JoAnn Gemenden of the New Jersey Clean Communities Council.

She says sorters at local recycling plants aren’t “equipped to manually or optically separate out reusable bags, and most likely the handles will cause the sorters to jam.”

To recycle reusable bags, one must look for specially designated bins; meaning, making a special trip — presumably emitting unspeakable pollutants into the air (if one doesn’t drive an EV) — to find one of these special bins. To say nothing of the time and expense…

Then again, it all depends on the type of “reusable bag.” Oy… We could go on and on about the unintended consequence of do-gooder NJ politicians. But we’ll stop there for now…

To the mailbag today, a reader comments on the British royal family’s ‘Royal Warrant’: “Let’s not forget Angostura Bitters,” he says. “You can’t make ‘The Perfect Manhattan’ without them.”

Take care! We’ll be back with more tomorrow…