We were looking for something, anything, to start our Friday edition that did not involve the Federal Reserve.

Unfortunately, “anything” turns out to be a source of spitting rage… 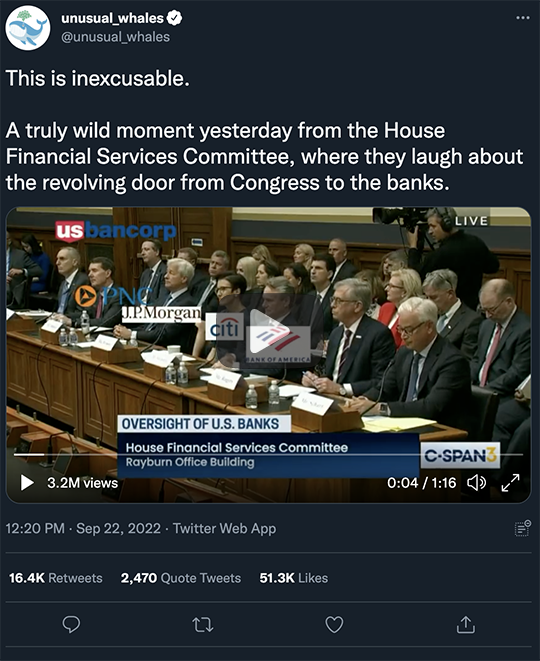 If you don’t feel like watching the clip, a bunch of bankers testified this week to the House Financial Services Committee. Before posing a question to Bank of America CEO Brian Moynihan, Rep. Trey Hollingsworth (R-Indiana) mentions one of his staffers is departing to become… a Bank of America employee.

“I hope you’ll take good care of her,” said Hollingsworth. Moynihan replied, “We’ll do that. Her father already works for us.” Laughter ensued all around.

Aren’t you glad Congress and the executive branch solved all the problems with the banking sector after the 2007–⁠09 financial crisis?

Meanwhile, here’s further evidence that Boeing is just like the big banks — not only too big to fail but too big to jail.

Under terms of an agreement announced yesterday, Boeing will pay $200 million to settle with the Securities and Exchange Commission. At issue: Misleading statements made by ex-CEO Dennis Muilenburg about the safety of the 737 MAX aircraft — two of which crashed catastrophically in 2018–19, killing 346 people.

The settlement is a coda to a separate settlement reached with Trump’s Justice Department in January 2021: For the sum of $2.5 billion — just over 2% of its market cap at the time — Boeing and its suits avoided any sort of criminal penalty.

We saw it coming: In 2020 a law prof told The Wall Street Journal, “The government can’t lose a company like Boeing as a defense contractor.” Just like Obama’s Justice Department feared that holding the banks accountable for their fraudulent acts would crash the economy.

Makes us wonder how many staffers from the offices of Sens. Patty Murray and Maria Cantwell have gone through the revolving door to Boeing over the years.

OK, now let’s talk some more about the Fed…

The most important thing out of the Fed this week was when chair Jerome Powell described his ultimate policy aim to reporters: “You’ll have a positive federal funds rate [that] could be 1% or so.”

If that’s Greek to you, our macro maven Jim Rickards simplified yesterday in a dispatch to readers of his Countdown to Crisis trading advisory: “You subtract the inflation rate from the fed funds rate and if the result is +1 or greater, then the Fed will consider that restrictive.”

Assume for the sake of argument that Powell is relying on the Fed’s preferred measure of inflation, known as “core PCE.”

“At that point, real interest rates would be positive 1% (4.5 — 3.5 = 1.0). Powell will hit the pause button and sit tight until the positive real rates do their work and core PCE gradually drops to 2.0%” — which as you might know is the number Fed considers in keeping with its mandate for “stable prices.”

Which leads us with trepidation to…

We’ll cut to the chase. “The answer is that Powell will do far more damage than he expects,” Jim concludes.

“That damage may help Powell get to his inflation target. But it will destroy markets along the way.”

Again, Jim shared this analysis just yesterday with his Countdown to Crisis readers. The actionable recommendations to protect yourself and even rake in big profits while everyone else is taking a bath? That’s reserved for his paying readers.

You can follow this link to learn more about the thinking behind Jim’s Countdown to Crisis recommendations and the steps you need to take starting — well, the best time was a few days ago, but for the moment it’s still not too late.

So let’s do a damage assessment going into the end of the week: Yes, the stock market is selling off again today.

But if it’s an “incoming global recession” indicator you’re looking for, it’s oil: A barrel of West Texas Intermediate is down more than 5%, trading under $80 for the first time since January.

➢ The big economic number of the day is also recessionary. The “flash PMI” of overall economic activity in September is up from August… but at 49.3 it’s still below the 50 level, signaling a shrinking economy

➢ The big headline on the front page of the Financial Times is a “nothingburger,” opines Sean Ring in our sister e-letter The Rude Awakening. Yes, the Bank of Japan staged its first intervention to strengthen the yen since 1998. Which is novel, yes, but the move had the effect of goosing the yen relative to the dollar by… a whole 1.1%.

“The BOJ wimpily intervened in the foreign exchange market for show,” says Sean. “Japan isn’t all that interested in a strong yen… This might be the very definition of kabuki theatre.”

Alas, it’s looking like a ’70s-style stagflationary recession — given the latest news from FedEx.

On the heels of a warning last week, FDX issued its quarterly numbers after the closing bell yesterday. They stunk.

But the details don’t matter nearly as much as FedEx announcing plans to raise shipping rates an average 6.9% next year — even steeper than this year’s 5.9% increase.

That’s despite an 11% year-over-year drop in the number of packages FDX handled daily during the third quarter.

Hmmm… Jacking up prices at a faster pace even as business is slowing down? Clearly someone has run the numbers at FedEx and figures the firm will retain a critical mass of customers willing to eat those higher costs.

That’s not the kind of recession we’ve experienced anytime in the last 30-odd years. Just sayin’…

For the record: All the banks in Lebanon are now closed indefinitely.

As we mentioned at the time, a guy walked into a bank last month and took the staff hostage — threatening to set himself on fire unless he was allowed to withdraw $5,500 to pay his dad’s medical bills.

This week brought a three-day bank holiday, starting Monday. But on Wednesday, the Association of Banks in Lebanon announced that “in the absence of any measures or even reassurances from the state and all security agencies in order to ensure a safe working environment”… doors would remain shut until further notice.

Well, that’s one way to keep the banks solvent as Lebanon’s nonstop economic crisis drags into a fourth year… 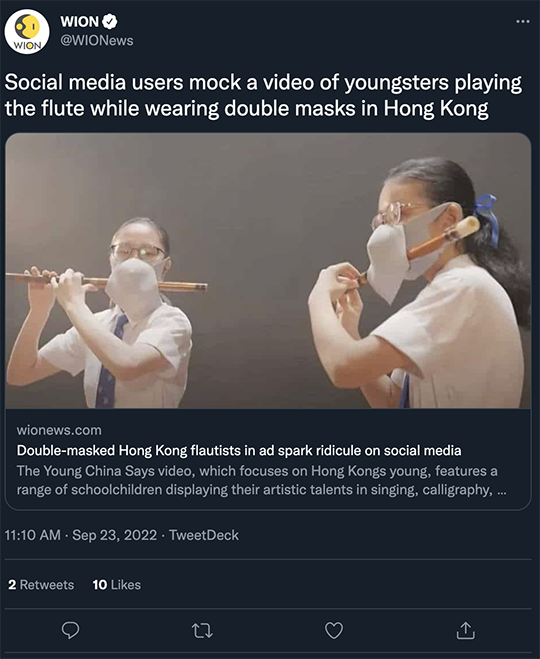 It’s called “Young China Says,” it was released on Wednesday and it runs about five minutes — showing over 400 kids from 41 high schools expressing themselves artistically, whether through calligraphy or martial arts or music.

Forty-five seconds in, you see two girls playing bamboo flutes — masked, and another covering over the instrument itself.

“This is going to lead to so many jokes,” said a Facebook user. “This is the extent to which Hong Kong is scared of COVID,” someone else was brave enough to tweet.

Well, there’s nothing like mockery to make the state back down from its most outrageous dictates. We suspect it’s no coincidence that today the Hong Kong government announced it will finally lift its international travel quarantine, effective Monday. Too late to restore Hong Kong’s luster as a magnet for global commerce, though…

To the mailbag: “Great idea of a guns and ammo gift card,” a reader writes of Emily’s suggestion in yesterday’s edition for a workaround as credit card companies propose tighter tracking of firearm purchases.

“Every year my family asks me, ‘What do you want for Christmas?’ My annual response is, ‘Camo and ammo,’ as my annual accumulations of Seahawks gear, pants, shirts, ties, socks and underwear accumulate to the point I could run a retail store, sigh…

“I’ll forward this issue and highlight this section, again, this year in the hopes that my true gift list is answered.

“All I want for Christmas is guns and ammo,

“Praise the lord and pass the ammunition!

The 5: Nice try, but the meter doesn’t sync up there at all with your revised lyric — no wonder your family members are unresponsive!

(Or do they tell you you’ll shoot your eye out?)