SBF Is a POS

Every instance of epic financial fraud inevitably attracts big-name investors who ought to know better.

So observed the legendary short seller Jim Chanos — the guy who a generation ago spotted Enron as a fraud while it was celebrated on mainstream magazine covers as “the most innovative company in America.”

Until this week, the poster child for this phenomenon was Theranos — the allegedly “world-changing” company run by Elizabeth Holmes. 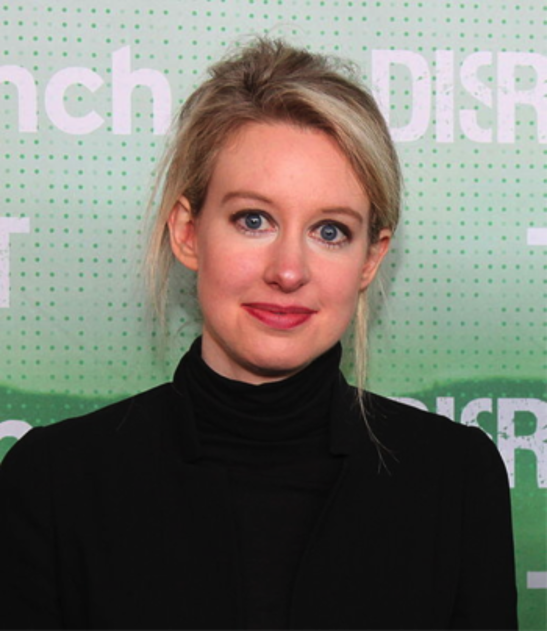 Perhaps to some extent Holmes believed her own BS about Theranos’ blood-testing machine. Regardless, she reeled in the dough.

Not just from celebrities like Rupert Murdoch and Henry Kissinger — but from supposedly shrewd Silicon Valley venture-capital types like Tim Draper, Steve Jurvetson and Marc Andreessen.

And so it goes with the crypto exchange FTX — which as we write this morning just filed for Chapter 11 bankruptcy. Its 30-year-old founder Sam Bankman-Fried — “SBF,” as he’s known — has resigned as CEO. 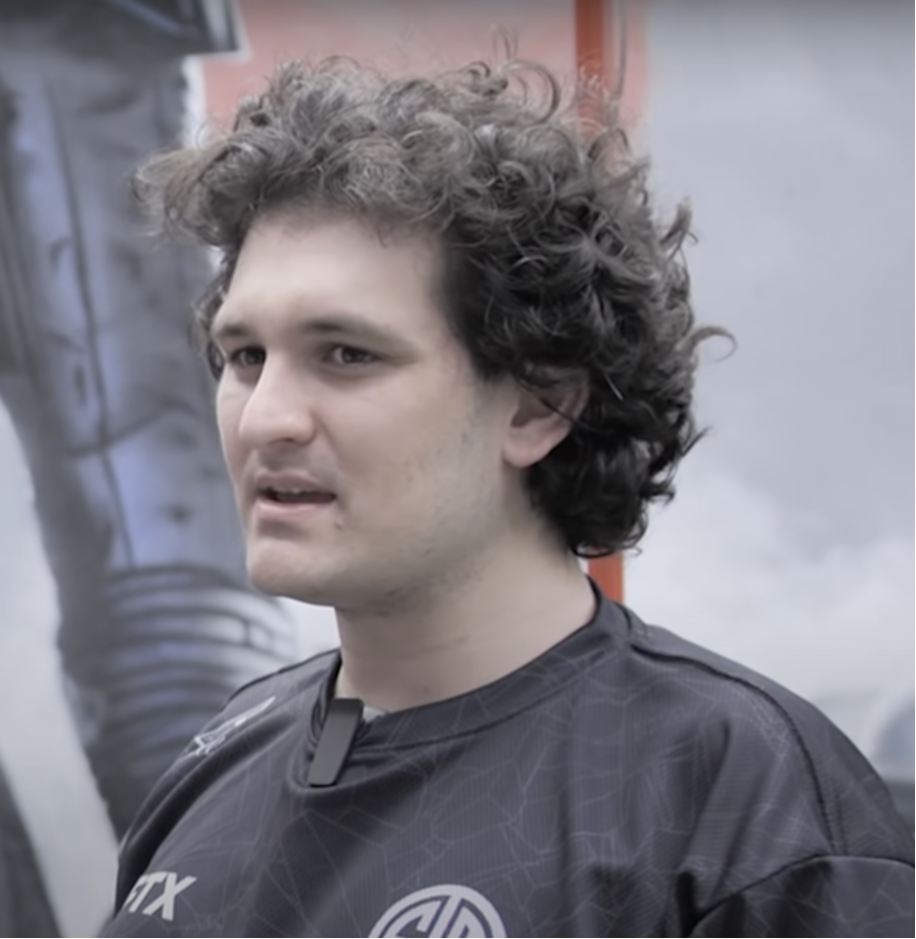 Yes, Tom Brady and his ex Gisele Bündchen have likely racked up massive losses — potentially in the hundreds of millions. But they’re not professional investors. They kinda-sorta have an excuse.

What about the renowned venture capital outfit Sequoia Capital — which yesterday wrote down a $150 million investment to zero? Or the Japanese holding company SoftBank? (Well, SoftBank founder Masayoshi Son has a history of terrible investments like WeWork, so never mind.) Or the genuinely brilliant Dan Loeb, founder of the hedge fund Third Point?

Supposedly there was nothing sketchy about FTX’s business model as built up by SBF. No proprietary token whose dollar price had to keep growing for the company to keep growing. Nope, FTX just helped everyday folks buy and sell crypto and took a cut of everyone’s transactions.

That was the assumption… the understanding… the myth.

The reality is that “FTX lent billions of dollars worth of customer assets to fund risky bets by its affiliated trading firm, Alameda Research.”

That’s according to The Wall Street Journal — which has done the best reporting among mainstream outlets this week. Basically, SBF’s baby FTX lent more than half of its customer assets to SBF’s other baby, Alameda.

SBF “said in investor meetings this week that Alameda owes FTX about $10 billion, people familiar with the matter said. FTX extended loans to Alameda using money that customers had deposited on the exchange for trading purposes, a decision that Mr. Bankman-Fried described as a poor judgment call.”

“A poor judgment call”? In traditional finance, it’s much worse.

“It’s kind of considered the third rail of the brokerage industry,” said Stanford business professor Darrell Duffie in 2011 — “that when you’re holding your customers’ funds in their names, you don’t touch them.”

Duffie made that observation in reference to the collapse of a firm called MF Global.

Alas the Journal failed to convey the rest of the MF Global story. Too bad. Doing so would have helped tease out where the FTX story goes from here. So it’s up to us…

Having touched the “third rail,” MF Global chief Jon Corzine experienced a shock no worse than a bit of static electricity petting the dog on a dry winter day.

Corzine is a card-carrying member of the power elite: During the 1980s and ’90s, he was one of maybe a half dozen people who turned Goldman Sachs into a too-big-to-fail “vampire squid.” Then he went on to become a U.S. senator and governor of New Jersey.

In 2010 he returned to finance and within barely 18 months he destroyed MF Global — a storied firm with a lineage going back to 18th-century England.

He made a bad bet in the firm’s trading account on European government bonds. To meet the margin calls, he raided customer accounts to the tune of $1.6 billion. To this day, MF Global ranks among the top 10 bankruptcies in U.S. history.

But there were no handcuffs, no leg irons, certainly no “PMITA” federal prison for Jon Corzine.

The feds brought no criminal charges and he settled a civil case with customers in 2016 for $132 million. In 2019, the SEC approved Corzine’s application to return to money management — so he could run a hedge fund. 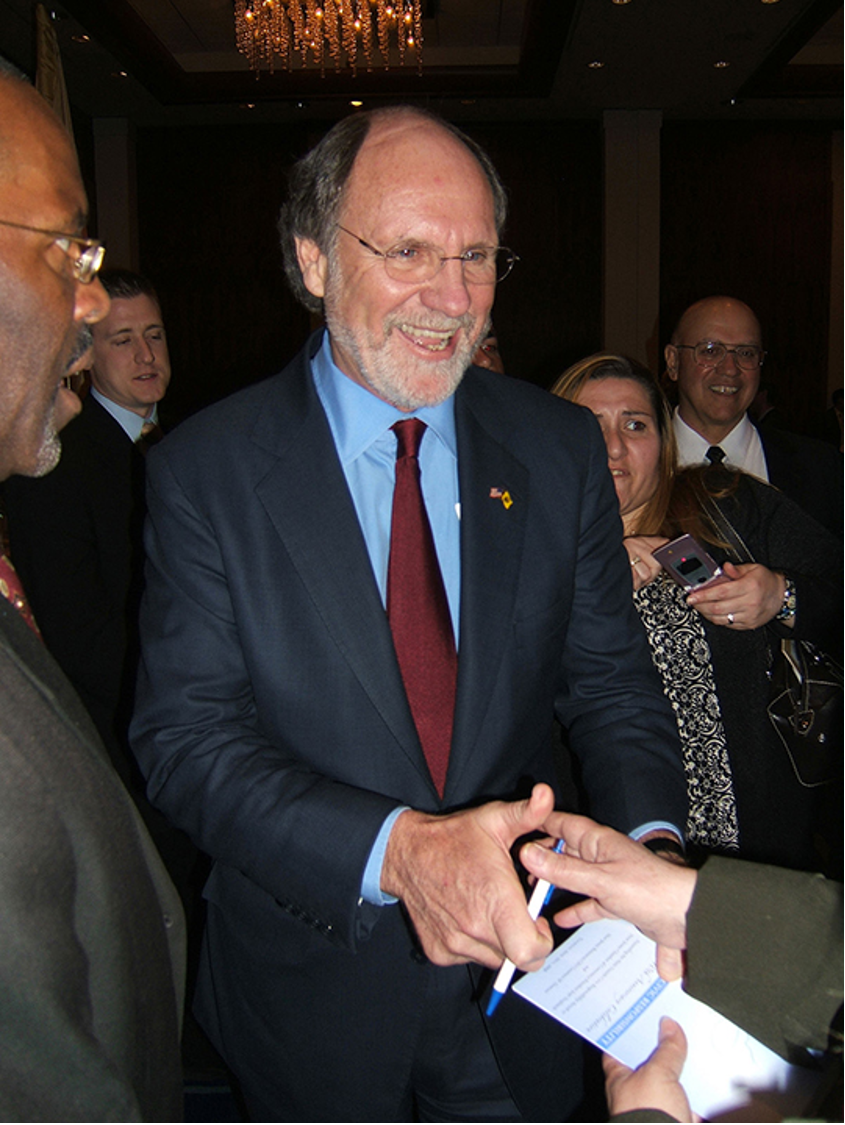 Impunity, thy name is Jon Corzine. [Photo by Flickr user Tony the Misfit]

Still, the destruction SBF leaves behind is not limited to the likely billions in customer losses. (Or the collapse of his own $16 billion net worth — which Bloomberg now reckons to be zero.) 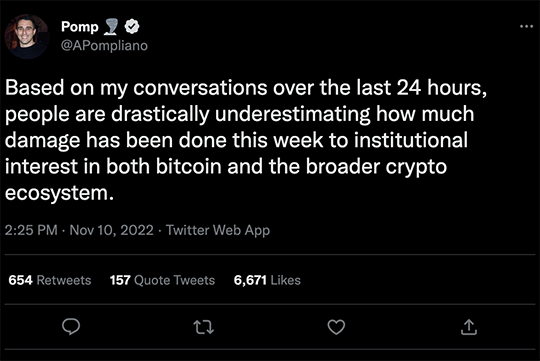 Understand, FTX is (was) a profoundly centralized venture — with a huge single point of failure that’s now there for everyone to see.

That’s in contrast to the crypto niche known as DeFi or decentralized finance. DeFi is the broad-brush name for a host of efforts to create a world with no need for financial middlemen — banking without banks, securities trading without brokerages, insurance without insurance companies. And in DeFi — as the name suggests — any one point of failure is small enough that it doesn’t create “contagion” effects everywhere else.

SBF hated DeFi — and he threw around a hell of a lot of weight and dollars in Washington, D.C., to throttle DeFi.

“Bankman-Fried had testified before powerful congressional committees, publicly supported crypto legislation and become a major political donor,” recalls today’s Financial Times. According to the Open Secrets website, SBF contributed nearly $37 million to political candidates during the 2022 campaign cycle. (Mostly Democrats, if that matters to you.)

Bitcoin pioneer and philanthropist Jeff Garzik — by 2018 he’d given away $100 million in Bitcoin — sees where all this is going now. And he feels sick… 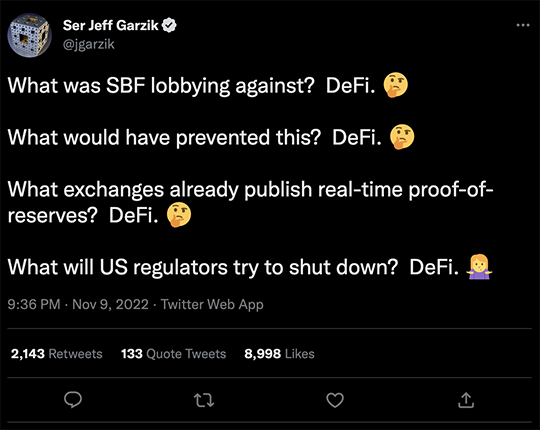 The conspiracy minded could be forgiven for thinking SBF did all of this on purpose at the bidding of some villainous character like Klaus Schwab or Bill Gates — to smother DeFi in its crib and to advance the agenda of herding us all into the financial boxcar of a central bank digital currency.

But in all likelihood, the reality is more pedestrian: SBF gave in to greed and hubris.

And in all likelihood — recalling the Corzine example as well as one of our major themes this week — there will be no accountability.

Barring another FTX-related revelation — entirely possible — the bleeding in crypto has stopped for the moment.

Still, looking objectively at the Nasdaq, colleague Sean Ring is unimpressed. “Even with yesterday’s colossal move, we’re barely back above the 50-day moving average.” In today’s Rude Awakening, Sean points us to research showing that during the awful 2000–2002 bear market, the Nasdaq staged daily gains of 6% or better 14 times — all while dropping 78% from the dot-com peak. Yikes.

We can’t let the week pass without reluctantly rising to the defense of Elon Musk in the face of third-world strongman tactics from the White House.

Because you can read about it anywhere, we won’t rehash the absolute chaos going on at Twitter this week — although we were amused by some of the fake accounts that popped up for a few hours, and we don’t just mean LeBron James demanding a trade… 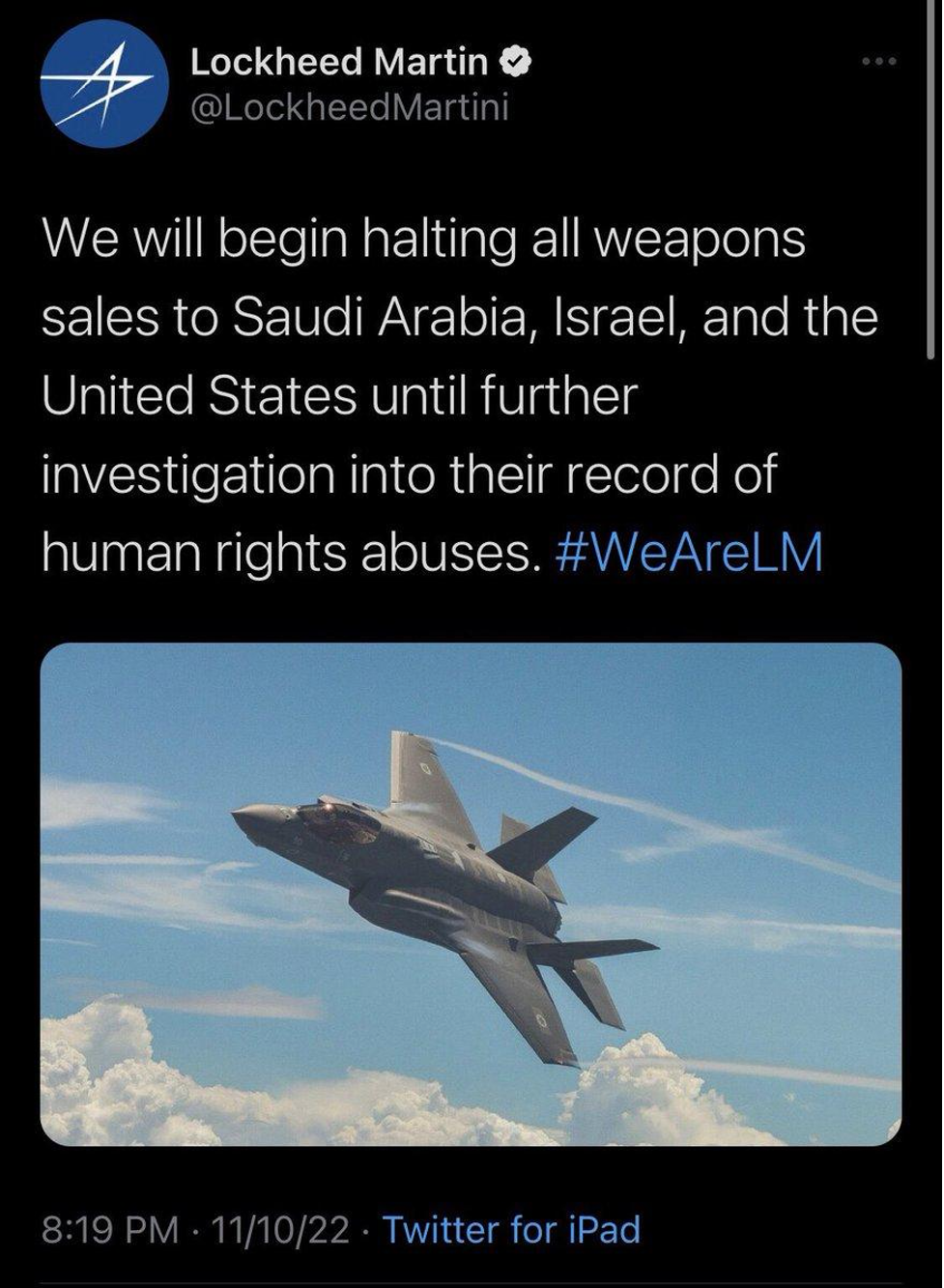 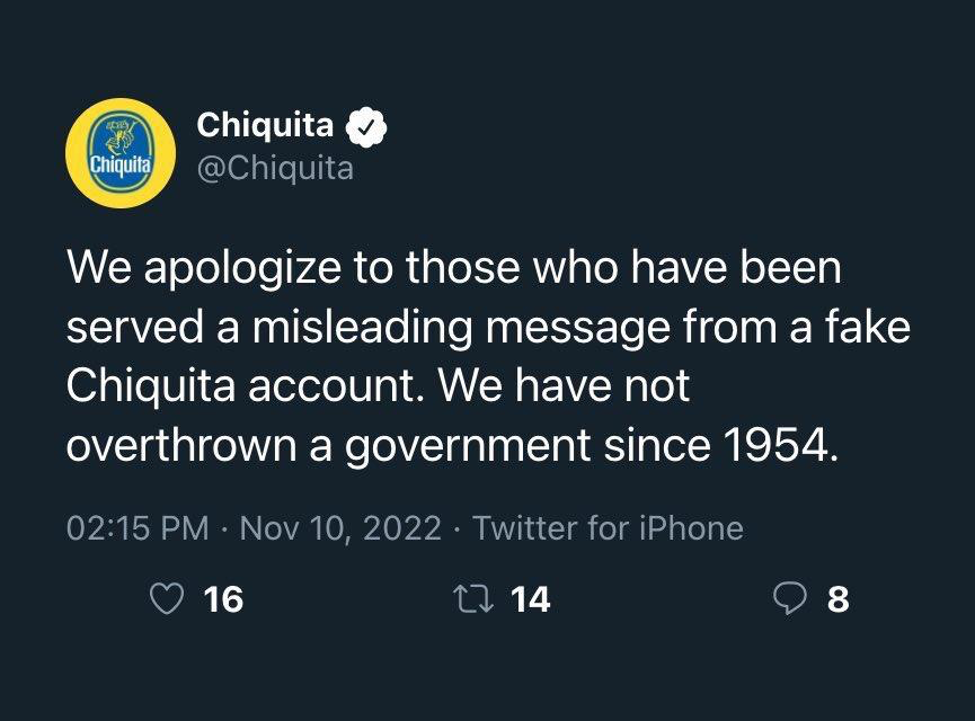 No, what’s on our mind is a moment at a Joe Biden press availability this week.

A reporter posed the following question: “Mr. President, do you think Elon Musk is a threat to U.S. national security? And should the U.S. — and with the tools you have — investigate his joint acquisition of Twitter with foreign governments, which include the Saudis?”

How low we’ve sunk in a little over 50 years. In 1970, Richard Nixon apologized for blurting out one day that Charles Manson was guilty before the trial was finished. Nixon realized the line he’d crossed. “The last thing I would do is prejudice the legal rights of any person, in any circumstances.”

Now, Joe Biden issues vague threats to someone the media doesn’t like about a legal process that hasn’t even begun yet — and for all we know, may never begin.

Remind us again why America’s so much better than China and Russia because we have the “rule of law.”

OK, enough outrage for one day. Especially a Friday. On to the mailbag…

“Like pretty much everyone else who writes in with a complaint, I want to preface this with ‘I love The 5!

“But it was disappointing and a little surprising to see how dismissive you were of the reader’s comments regarding Atlas Shrugged and its parallels to the sorry state of our current world.

“Whatever ‘psychodrama’ you refer to in the author’s life seems totally irrelevant. Atlas Shrugged stands on its own merits. It is a brilliant and visionary work and the reader was quite right to point out how prescient Rand’s novel was.

“If you disagree with the ideas contained in the book then by all means critique the work. But attempting to minimize its value by subtlety smearing the author seems to be the go-to technique of those who wish to deter new readers of Rand and is beneath you.”

The 5: OK, my critique was hasty and ill-formed. So I’ll try again, though I can’t promise I’ll do much better while crashing deadline…

There are considerable merits to Rand’s Objectivist philosophy — which she expressed largely in nonfiction form throughout the 1960s and ’70s. Her collections of essays are definitely worth a look.

Before that, she chose to use fiction as her vehicle. She told her stories through impossibly heroic, forever logical characters that served for better or worse — frequently worse — as role models for young, vulnerable boomers and early-wave Xers. That was especially true if they felt they lacked role models in real life.

Some of them were so badly warped by the sense they could never live up to the Dagny Taggart-John Galt standard, they never got over it. Most, fortunately, made peace with their humanness and got on with life.

Rand’s protege and lover, the psychologist Nathaniel Branden, wrote and spoke at length about this phenomenon. He started with his 1971 book The Disowned Self — a fine read on its own, but he said he wrote it in “a sort of code” for Rand’s troubled followers — and continued nearly until his death in 2014.

➢ To this day, there’s a vigorous debate about whether the coterie of hangers-on surrounding Rand in the ’50s and ’60s met the definition of a “cult” I don’t have a strong opinion, but the fact the debate exists at all is… interesting.

So if you’re able to read Atlas for just the story and the parallels to the present day, good on you. Just know there are other people out there whose experience is/was rather different…