The good news is that the 2023 tax brackets have been adjusted considerably higher to reflect inflation. And yes, there’s bad news.

So about a 7% increase. Could be better, could be worse — but 7% will protect a lot of folks from the dreaded “bracket creep” that bedeviled many Americans during the last big inflationary bout of the late 1970s and early ’80s.

Since that time, Congress has written many provisions into the tax code to protect you from inflation’s ravages when you file your 1040.

But — and here’s where the bad news comes in — there are three enormous exceptions. Call them “gotcha taxes.” And in 2023 they could take a big bite out of higher earners, homeowners and especially senior citizens.

If you fall into one or more of those categories, read on…

The newest gotcha tax is the Obamacare tax.

Strictly speaking, it’s a Medicare surtax, but it took effect along with Obamacare in 2013. There are two main features to this surtax…

Even though these income thresholds came into effect nearly a decade ago, they’ve never been adjusted for inflation. If they were, they’d be $252,700 for individuals and $315,880 for couples.

(And even with those higher thresholds, there’d still be a heckuva marriage penalty.)

Going back a little further in history, another gotcha tax — this one affecting homeowners — came into effect under Bill Clinton.

Under the Taxpayer Relief Act of 1997, there’s an exemption on any capital gains you rake in from the sale of a personal residence — $250,000 for individuals, $500,000 for couples. (You have to have lived in the home for at least two of the last five years, and the exemption is allowable only once every two years.)

Even though this legislation was passed a generation ago, those thresholds have never been adjusted for inflation. If they were, they’d be $458,480 for individuals and $916,960 for couples.

And even those higher figures wouldn’t be fair — considering that home prices have risen much faster than the inflation rate.

Imagine a just-retired couple looking to downsize and sell a home where they’ve lived for the last 20 or 30 years. Ouch.

The oldest of the gotcha taxes is the most egregious — affecting all but the most impoverished senior citizens — and it goes back to Ronald Reagan.

Since 1984, seniors have paid tax on “provisional income” above $32,000. The figure is calculated by adding up your gross income, tax-free interest and 50% of Social Security benefits.

Even though this formula came into effect 38 years ago, it’s never been adjusted for inflation. If it were, the threshold would be $90,650.

Would that make a difference to your standard of living?

But no, Congress won’t come to your rescue on any of these gotcha taxes — which only makes the bite of inflation worse than it is already.

And at a time when stocks, bonds and precious metals are all down year-to-date? Ugh.

It’s because of this ugly backdrop that Paradigm Press Group is convening an extraordinary meeting of the minds in a little over 24 hours from now.

Three of our top editors — with very different backgrounds and often differing opinions — are all in agreement about the single-best asset class where you can put your money right now.

Jim Rickards, with his macroeconomics background, says it’s the way to go. James Altucher, with his history in hedge funds and venture capital, says it’s a sure winner. Ray Blanco, our go-to expert on all things tech and biotech, agrees it’s your best bet going into 2023. And you can invest right alongside them.

You can “partner up” with Jim, James and Ray — and you’ll be the first to learn about this one-of-a-kind opportunity tomorrow night at 7:00 p.m. EST. You can reserve your spot by following this link and entering your email address.

To the markets, where too many people are obsessed with too much jawboning.

By the time you read this, Federal Reserve chair Jerome Powell will have delivered a Big Important Speech — his last one before the Fed makes its next move with interest rates two weeks from today.

Expectations are high, judging by the front page of today’s Wall Street Journal… 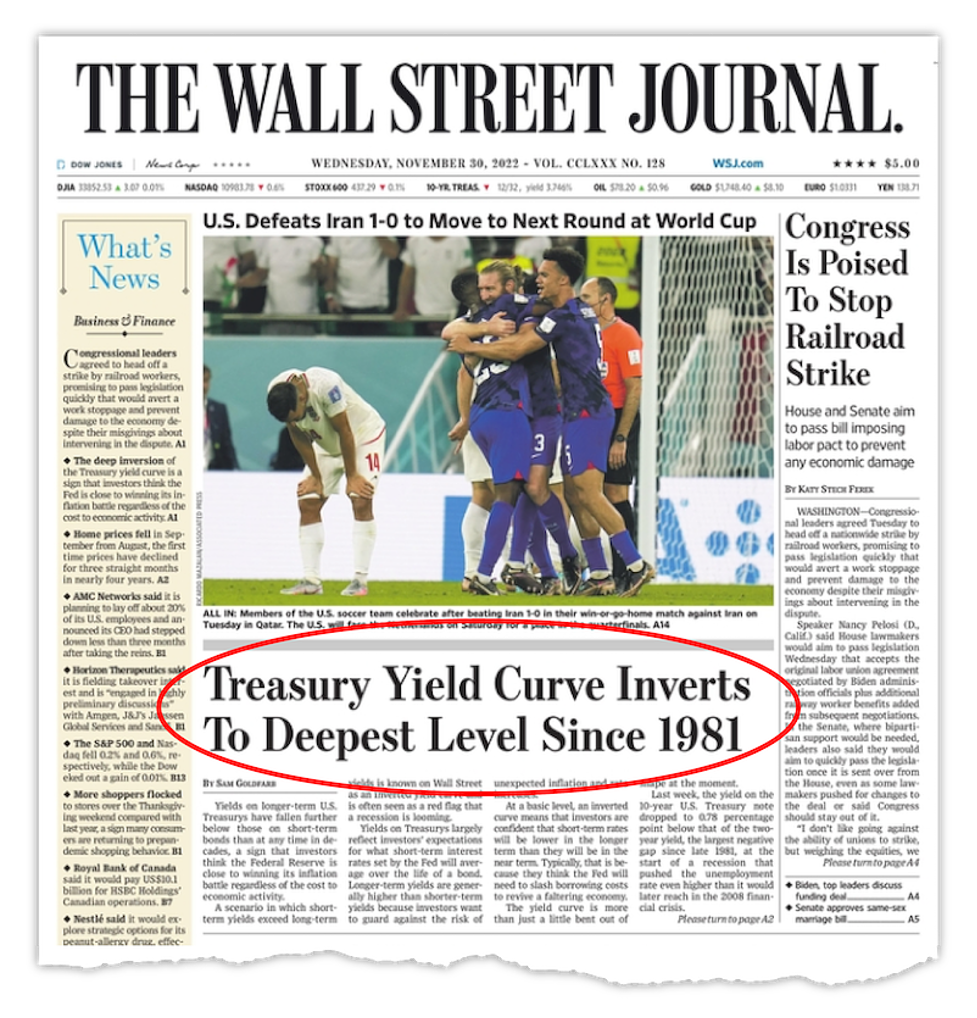 “Yields on longer-term U.S. Treasurys have fallen further below those on short-term bonds than at any time in decades,” says the Journal — “a sign that investors think the Federal Reserve is close to winning its inflation battle regardless of the cost to economic activity.”

Translation: Wall Street is once again betting on a “Powell pivot” sooner rather than later. OMG, THE YIELD CURVE IS THE MOST INVERTED SINCE 1981! INFLATION IS CONTAINED! POWELL WILL EASE UP WITH THE RATE HIKES!

We’ll gently remind you what Jim Rickards has been saying for weeks now: The Fed won’t ease up until the fed funds rate (currently 4%) is higher than the “core PCE” inflation rate (currently 5.1% and rising).

So it wouldn’t surprise us at all if Powell once again takes Wall Street’s expectations and smashes them against a rock. He’s done it three times since August — with a “hawkish” speech at Jackson Hole, Wyoming, and again at his two most recent press conferences. 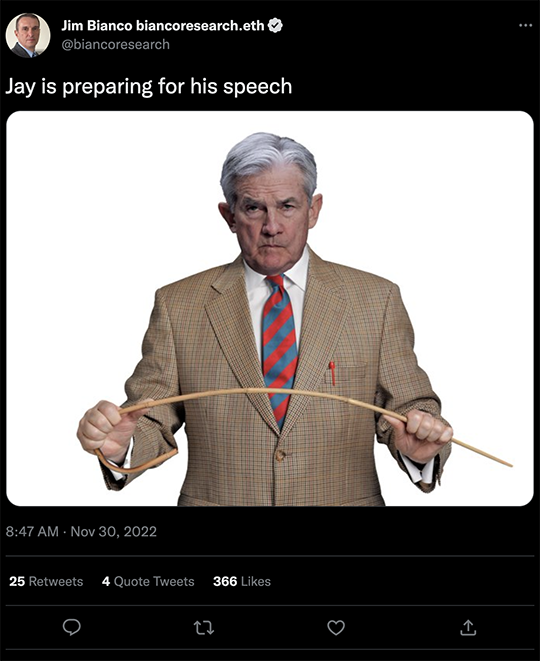 As it is, the major U.S. stock indexes are dipping further into the red in advance of Powell’s speech.

Gold is little moved at $1,753 but silver is rallying a bit to $21.63. Crude is back above $80 after the Energy Department’s weekly inventory numbers.

At least a national rail strike probably won’t throw a spanner into the economy: As we write, the House has passed legislation forcing the unions to adopt a new contract.

Crypto is looking relatively robust amid another mysterious crypto death and the much-ballyhooed “interview” with FTX co-founder Sam Bankman-Fried at The New York Times’ “DealBook Summit.”

“A Russian billionaire has died in a helicopter crash near the French-Italian border,” says the New York Post. “Vyacheslav Taran, 53, founder of Forex Club and president of the Libertex Group, was the sole passenger of a helicopter that crashed in Villefranche-sur-Mer this weekend, according to multiple reports.”

The chopper was headed to Monaco, where Taran had lived with his family for the last decade. The pilot was also killed.

The most disturbing of the three deaths is that of Nikolai Mushegian, a developer of decentralized finance platforms who tweeted the following from Puerto Rico a month ago… 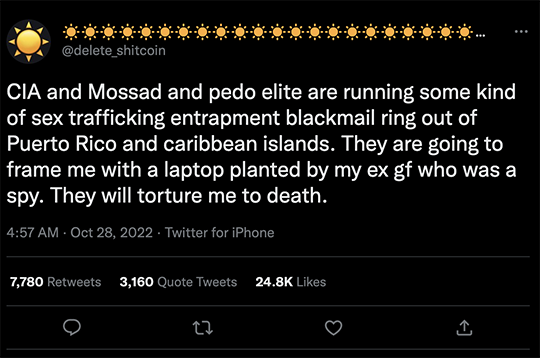 A little over four hours later, a surfer found his body in the waves not far from his beach house.

No, we have no idea what to make of the string of deaths in general, or Mushegian’s in particular.

As for “SBF” and his Big Important Interview… it’s not underway until later today. Times reporter and CNBC host Andrew Ross Sorkin promises to pose “tough questions” — which would be a rarity in Sorkin’s career, but you never know. Again, we’ll follow up tomorrow.

Elsewhere, the crypto exchange Kraken plans to lay off about 30% of its workforce — roughly 1,100 people.

To the mailbag: “Actually, I buy all that stuff about the clots,” a reader writes after we made a passing remark yesterday about “the idiotic video called Died Suddenly.”

“You don’t? Please share with us the other side of this debate.”

Said another who watched the video: “All of those things happened to me” after he got his third COVID-19 shot. He ended up in the emergency room in suburban Chicago with a severe blood clot in his left lung, and four smaller ones. He has no recollection of the week from March 7–15. (We’re truncating his story in the interest of time today.)

“I’m not telling you NOT to get an mRNA vaccine; however, I am telling you to watch this movie before making a decision.”

Alas, people see what they want to see. They saw that I called the video idiotic and didn’t see the preceding sentences about “the broken promises of the mRNA vaccines” and “a lot of well-founded skepticism on that score.”

Or maybe I wasn’t clear. My point is that the video serves to discredit the valid case of many vaccine critics.

“The presentation starts with an indication that crazy is about to be on display; a rundown of various ridiculous nonsense litters the first minutes, including thinly veiled attempts to claim, for example, that man never went to the moon.”

So writes “Tickerguy” Karl Denninger — who over the last two years has constructed a damning case against the mRNA vaccines relying on his background in statistics, and no one’s been able to debunk him.

His assessment: The video “is either the work of someone crazy or it’s a deliberate attempt to discredit the truth.

“Which is in operation here I cannot prove but from my point of view it does not matter which it is. Both are equally dangerous and worthy of scorn at minimum and, if intent can be shown, much worse than simple scorn is called for.”

Hope that’s clearer. Sorry about the tough love there…

P.S. Hat tip to Chris Hennessey of Putnam Wealth Management for identifying the three “gotcha” taxes with which we began today’s issue. He was interviewed this week on the Financial Sense podcast.

I didn’t describe my podcast listening habits when I laid out all my media consumption during the summer, but I’ve been listening to Financial Sense for 15 years now.