Let’s briefly connect the dots here: Better-than-expected job numbers make it more likely the Federal Reserve will stick to its interest rate increases to “cool” the economy and get inflation back under control. Wall Street doesn’t like that because higher rates translate to less of the Fed’s EZ money that’s fueled the stock market ever since the 2008 financial crisis.

But that doesn’t tell even half the story: The Fed is looking to kill off at least 1.3 million jobs before it considers its work done.

Before we explain, a bit more about today’s numbers: The wonks at the Bureau of Labor Statistics conjured 263,000 new jobs for November — considerably more than the typical Wall Street economist was expecting. The official unemployment rate held steady at 3.7%.

As Econoday drily sums up, “Fed policymakers will find that labor market conditions have yet to ease significantly. This will allow [the Fed’s Open Market Committee] to impose further rate increases with more confidence that it will not harm the present labor market.”

Here’s the thing: Fed economists want to harm the labor market. They even run the numbers on how many jobs they think they have to kill in order to get inflation back under control.

Bloomberg published a remarkable story in September, revealing that Fed economists were deeply worried about how the tight job market was fueling wage inflation and the dreaded “wage-price spiral.”

“The idea is that, with approximately two openings for every unemployed person searching for work — versus a ratio of about 1.2 in the years before the pandemic — the unemployment rate will have to go higher now than it would have had to then to bring labor supply more in line with labor demand and reduce upward pressure on wages.

“At 3.7% in August, the unemployment rate counted 6 million Americans out of work and actively searching for a job. A rise to 4.5%, assuming no change in the size of the labor force, would amount to job losses of about 1.3 million.” [Emphasis ours.]

And the unemployment rate is no different now than it was then — 3.7%.

And if you think that’s perverse, get this…

In his classic 1987 book about the Fed called Secrets of the Temple, journalist William Greider revealed how Fed economists studied the relationship between interest rates and suicide rates: Rising interest rates were correlated with rising suicide rates, presumably brought on by the stress of job loss and the inability to make ends meet.

In other words, the Fed in the early 1980s thought it was doing a good job if suicide rates rose. That meant the Fed was getting the near-runaway inflation of the late 1970s back under control.

Which is crazy enough on its own. Now consider the fact that the whole reason the Fed under Paul Volcker had to take such extreme action to get inflation under control — 16% mortgages! — was that the Fed itself under Arthur Burns created all that inflation with its epic money-printing in the 1970s.

The arsonists put out the fire they started, basically…

By most accounts, it’s the lessons of the 1970s that are uppermost in the mind of the current Fed chair, Jerome Powell.

That’s in sharp contrast to his money-printing predecessors Janet Yellen and Ben Bernanke, who were obsessed with “not repeating the mistakes of the 1930s” and the Great Depression.

So the Wall Street sell-off today is likely just a preview of coming attractions. The Fed won’t consider its job done until the monthly job numbers are shrinking — by the hundreds of thousands, every month for several months. By then, we’ll be in the midst of a Fed-induced recession. Only then will the stock market finally find a bottom and start to stage a recovery.

What to do in the meantime? Well, our timing couldn’t have been better for Paradigm Press Group to have held our exclusive “Partner’s Lounge” event last night.

Jim Rickards, James Altucher and Ray Blanco — whose outlooks on the market are frequently at odds — are all in agreement about the one go-to asset class of 2023. It’s something most retail investors never think about. “Partner shares,” we call them.

What kind of profit potential are we looking at? Well, starting in the midst of the 2008 crisis, one partner share delivered 240X gains after just four years. See more examples here.

Partner shares are where Jim, James and Ray are putting their own capital right now… and for the first time, we’re giving you the chance to invest alongside them.

If you missed the event last night, you owe it to yourself to check out the replay right away.

As the day wears on, Wall Street is trimming its early losses: The Dow is down about 150 points or a half percent at 34,244.

Gold is back below $1,800, though not by much. Silver, however, is adding to yesterday’s big rally and just crested $23 for the first time since April. If that can hold at the end of the day/week… could be a big deal.

One unknown that’s no longer hanging over markets is the prospect of a national rail strike. But there’s a bigger story the mainstream is overlooking.

When we left you yesterday, Senate Republicans were reluctant to use legislation to impose a contract on the freight railroads and their unions. But for whatever reason, that resistance quickly melted away… the Senate passed the bill 80-15… and the president signed it this morning.

Remarkable, really. Almost feels like a stake in the heart of private-sector labor unions — delivered by a Democratic president and a Democratic-controlled Congress, no less.

In the mid-1950s, over 35% of the private-sector workforce belonged to a union — a legacy of the Democrats’ sweeping New Deal reforms. The number fell to about 21% by the late 1970s… and collapsed to only 7% today.

And now the “pro-labor” political party has told the membership of four railroad unions who rejected a new contract to get bent. Feels like the end of an era.

➢ In contrast, over a third of government workers belong to a union. Should people who rely on the taxpayer for their pay even be allowed to unionize?

Crude is holding above $81 a barrel this morning, as two huge cross-currents will hit the oil market in the next three days.

On Sunday, ministers from the OPEC+ nations will revise their production targets. Speculation is rife about what they’ll decide — but it wouldn’t surprise us if they cut back. If the globe is slipping into recession, it’s an ideal excuse for Saudi Arabia to give its overtaxed oil fields a bit of a breather.

Then on Monday, the European Union and the G7 nations will attempt to impose their unworkable price cap scheme on Russian oil.

As we write, leaders of the EU countries just reached agreement on a $60-per-barrel cap — forbidding buyers of Russian oil any access to Western insurance, financing and shipping if they pay more.

That’s lower than the $65–70 cap we were anticipating earlier this week — but still in line with what most of Russia’s oil customers already pay. So the disruption to global oil markets should be minimal.

But the devil is in the details, and some of the details have yet to be hammered out. Stay tuned…

Meanwhile, leaders in the heart of Europe might be starting to wonder if they’ve taken this whole Russian sanctions thing too far.

That includes the chancellor of Germany, according to The Times of London: “Olaf Scholz has suggested that Europe should go back to its prewar ‘peace order’ with Russia and resolve ‘all questions of common security’ after the war in Ukraine if President Putin is willing to renounce aggression against his neighbors.”

Gee, and the start of winter is still more than two weeks away.

Granted, Scholz is talking about getting back to normal after the war is over. But that’s more than you hear from American elites who speak of leaving Russia permanently “weakened.” That’s when they’re not talking about removing Vladimir Putin from power and even breaking up Russia into a half-dozen or more statelets.

And another cautionary note: Scholz leads a tenuous three-party coalition — with anti-Russia hardliners from the Green Party in the key posts of foreign minister and economy minister. Too much of this “peace order” talk and his majority in the Bundestag could easily fall apart.

➢ Historical footnote for older readers: No, the modern-day Greens in Germany are not peaceniks. Anything but — do a web search on foreign minister Annalena Baerbock. It’s a huge change from 40 years ago, when the Greens were motivated almost entirely by the cause of nuclear disarmament. It’s not your father’s European Green movement anymore… 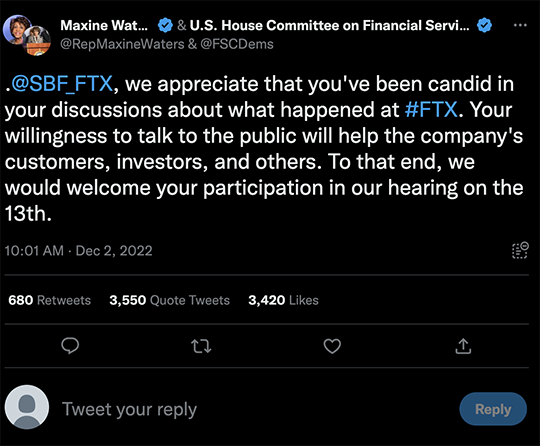 Yes, that’s Rep. Maxine Waters (D-California), chair of the House Financial Services Committee, politely requesting today that SBF make himself available for a hearing this month — seeing as he was so “candid” in his appearance (via video from his fortified compound in the Bahamas) at The New York Times’ “DealBook Summit” on Wednesday.

Yes, the replies were scathing… 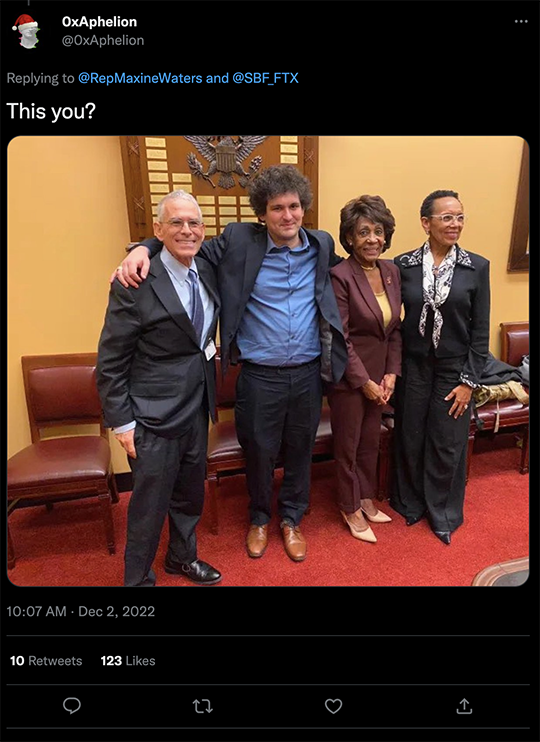 … but no, we’re not surprised by Waters’ groveling.

She was among many members of Congress who swooned at SBF’s smooth talk about wanting to be a “responsible” crypto operator… and who came *this* close to passing model legislation carefully crafted to give FTX a permanent leg up on its crypto competitors. Just get a load of this from earlier in the year… 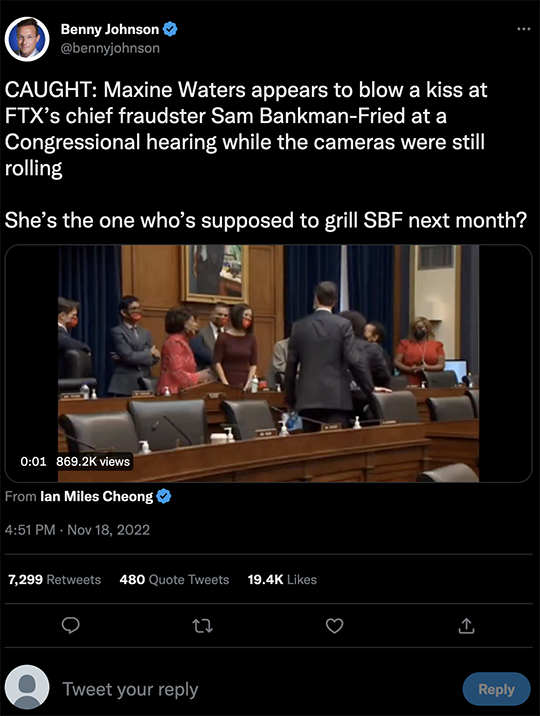 And even now, after all that’s happened — the raiding of customer accounts, the billions in losses, the shattered trust — SBF still casts a spell.

We’re tempted to cry in despair… or fume in outrage… but with the weekend upon us, we choose the proper response, which is laughter.

It’s mockery, after all, that the power elite fears the most.

Have a good weekend (Go Dawgs!),