“If you’re not a currency trader, you may not be too worried about trends for the U.S. dollar,” says our retirement-and-income specialist Zach Scheidt.

“But these trends have a major effect on American businesses,” he says. “And the dollar’s shift lower opens some great opportunities for investors who understand currency dynamics.

“Today, I want to show you how a shift in one chart can lead to more income for you,” he says. “It’s a picture of the U.S. dollar compared to a basket of other international currencies. 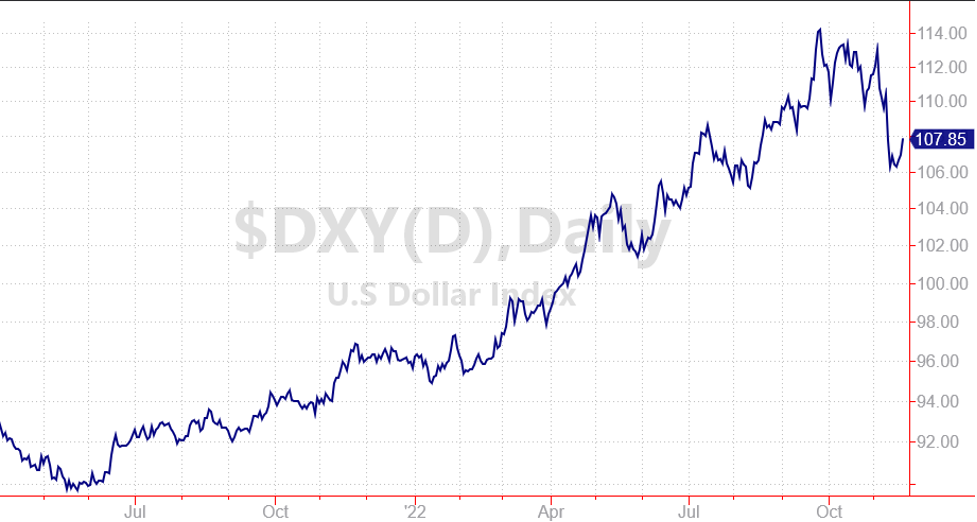 “Clearly, the dollar has been trending higher for much of the year. That’s largely because the Fed has been hiking interest rates, which means foreign investors can get better yields for dollar-denominated investments.

“And while this trend has been in place for several quarters, we’re now seeing a major shift.

“Instead of continuing higher, the U.S. dollar has rolled over,” says Zach. “In other words, the dollar is weakening compared to other currencies like the euro, the British pound or the Japanese yen.

“And a weak U.S. dollar is great news for American companies with customers all around the world,” says Zach.

“For starters, a stronger euro, British pound or Japanese yen makes it easier for international customers to afford the goods or services that American companies offer.

“Think about it this way: A $1 million monthly service contract would have cost a customer 1 million euros when the dollar and euro were trading at parity,” he notes.

“So American goods and services are more affordable when the dollar weakens, making U.S. companies more competitive in international markets.

“A second benefit is the way profits are reported here in America,” Zach says. “If the euro is trading at parity with the U.S. dollar, a 1 million euro profit would naturally equal $1 million in profit for the U.S. company.

“But when the dollar weakens, 1 million euros in profits might actually translate to $1.2 million in U.S. currency. So American companies can earn more with the same amount of business just because the dollar is weakening.

“A weakening U.S. dollar might sound like a negative event. But there are several great investments that will pay off as the dollar trades lower,” says Zach.

“My team and I are hard at work researching your next income opportunity,” he adds. It’s a company that should benefit from two major tailwinds (a weakening dollar is one of them) heading into 2023.

“More details to come… Can’t wait to share with you to help prepare you for a profitable new year.”

[Not a Lifetime Income Report subscriber? Zach and his team are opening membership now… And the stakes couldn’t be higher.

That’s because if you’re near or at retirement age, it’s prudent to take action against ruinous inflation that could dissolve all your hard-earned savings.

Right now, Zach Scheidt, a former hedge fund manager for some ultra-wealthy clients, is following charthounds who say inflation could soon explode even higher than it is now, by 20% or more.

So in order to protect your portfolio — and survive America’s deadly inflation crisis — you can access Zach’s intel now.]

And it appears China’s repealing its nonsensical zero-COVID policy has done nothing to buoy oil; rather, a barrel of WTI is down 3% at $71.95.

For a fresh take on crypto, read on…

“Following the collapse of FTX, news reports began to trickle out that crypto brokerage Genesis Trading could be in trouble,” says our crypto maven and iconoclast investor James Altucher.

“These stocks are like ETFs: GBTC owns positions in Bitcoin and ETHE has positions in Ethereum,” he says. “But here’s where things get interesting…

“As of this morning, each share of GBTC trades for about $8.50, despite the fact each investor is entitled to almost double that amount in Bitcoin.” A nearly identical scenario is setting up with ETHE shares. “This means that investors can basically get two Ethereum for the price of one,” James says.

“Of course, there are some drawbacks here. For one thing, if these funds are actually in trouble, the price could theoretically go to zero. However, I believe this is extremely unlikely.

“Grayscale stores the cryptocurrency owned by GBTC and ETHE with Coinbase,” James notes.

“Unlike FTX, Coinbase is a publicly traded company audited by one of the most respected accounting firms in the world,” he says. “By law, the company is required to keep tight control of its records and accounting.

“And like Coinbase, GBTC and ETHE are publicly traded, which means they are subject to the same level of strict supervision. For this reason, I believe the risk of owning GBTC or ETHE is not much greater than owning Bitcoin or Ethereum stored on Coinbase.”

He adds: “It’s worth noting that there are some tax and fee downsides to owning these trusts as well. But I believe the massive discount more than compensates for those specific costs.

“For long-term investors, I believe this is a low-risk way to basically double the size of their crypto investments with only a slight increase in the amount of risk exposure,” James concludes.

“For investors who are bullish on the long-term potential of Bitcoin or Ethereum (I prefer Ethereum), these funds look like a rock-solid deal.”

“No group has stepped up to acknowledge or accept that they’re the ones who’ve done it,” Sheriff Fields says, but local law enforcement, plus the FBI, are working on it. 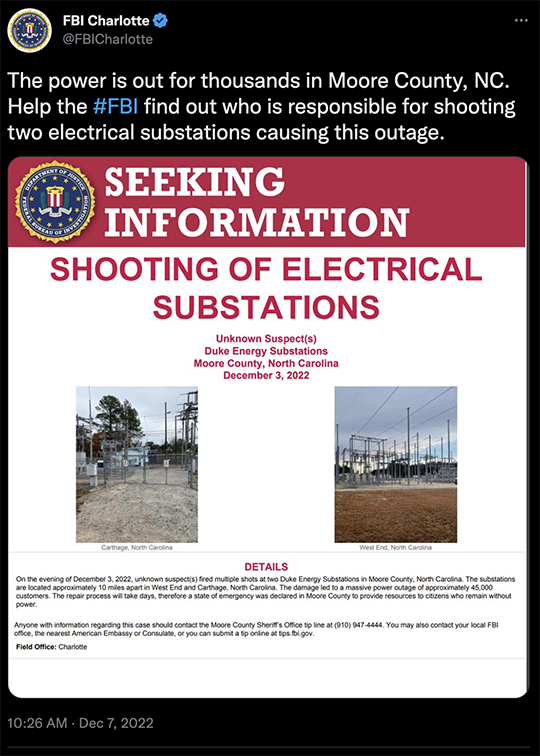 Duke Energy says of Moore County today: “Equipment damaged from recent vandalism has either been repaired or replaced… with the goal of having the majority of customers restored before midnight tonight.” (Schools and many businesses are closed, and some county residents are still streaming into warming centers for a hot meal and a shower.)

Meanwhile, we wonder how many transformers were damaged in the Moore County attack, and whether the transformer shortage — that we reported in September — has played a significant role in the ongoing power outage.

And aren’t you just thrilled to know that, while the U.S. grid is vulnerable and our fellow Americans are suffering, the Biden administration promised Ukraine an additional $53 million last week to buy — what else? — transformers and shore up its bombed-out electrical grid?

Now, as promised yesterday, we’re featuring more of your opinions on Elon Musk’s ability to salvage free speech in America.

“I’m not counting on Elon Musk or Matt Taibbi to be the saviors of free speech, even working together,” says our first contributor today.

“Restoring the First Amendment is going to be quite a process where each of them can play a role. Ditto, busting the Biden Crime Family and the police state.

“What’s really intriguing is how some of the left’s rock stars are reacting as if they’re the ones being censored. In fact, their ability to censor others is being curtailed and their corruption is being exposed.

“Here’s another interesting question: Can Twitter even be fixed and made profitable? Or will this be a controlled demolition?”

A reader replies: “My answer is that while Musk perhaps has some conflicts, Twitter is already irreparably broken, so why not cheer for him with our eyes wide open?”

Another reader writes: “I want to believe that Elon Musk will open up Twitter and expose the cobwebs and evil machinations that went on behind the scenes.

“But I’m wary of him because all of his businesses exist due to government largesse. SpaceX due to military contracts, and Tesla because of government subsidies.

“For someone who is so tied to the government to then use Twitter to expose the very entities that enable his other businesses to exist seems unlikely. What’s that saying… don’t bite the hand that feeds you?

“Again, I want to believe he’s seen the light and exposing government corruption, but is he really willing to throw away his billions and his companies that can’t exist without massive subsidies?

“I don’t know anyone with that sort of moral fortitude.”

“Here’s my take,” says another, “Musk is a businessman, promoting his new investment and trying to build overall trust in the Twitter platform.

“I’m sure his motives are to get maximum value from his investment, and he thinks that he is doing the right thing by exposing ‘the facts.’

“He’s attempting to right past wrongs by trying to squelch the bots that post to Twitter, oh, and charging $8 for the blue check mark.

“All, again, to build trust.

“What else could an impatient businessman do? Where this trail will lead him is still in question.”

The 5: Without getting too in the weeds this afternoon, the “Twitter Files” that Musk released Friday, via journalist Matt Taibbi, might have been compromised. 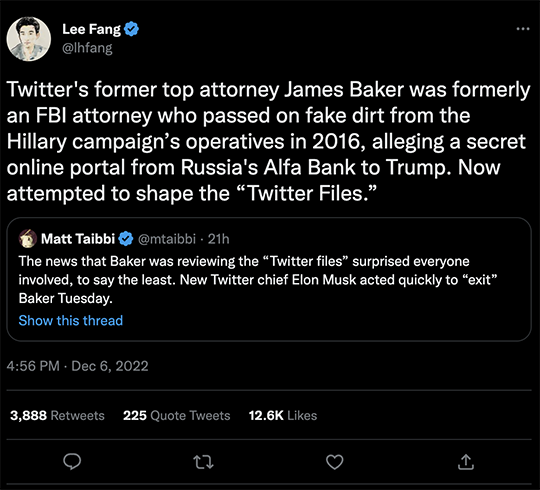 As one Twit-wit put it: “These former FBI people are everywhere… or is it just me?”