The Biden administration’s “jihad” against fossil fuels — the word Paradigm Press energy expert Byron King used while laying out his 2023 predictions — is expanding on a new front.

Welcome to an “energy insanity” edition of The 5… starting with the prospect of a nationwide ban on gas stoves. 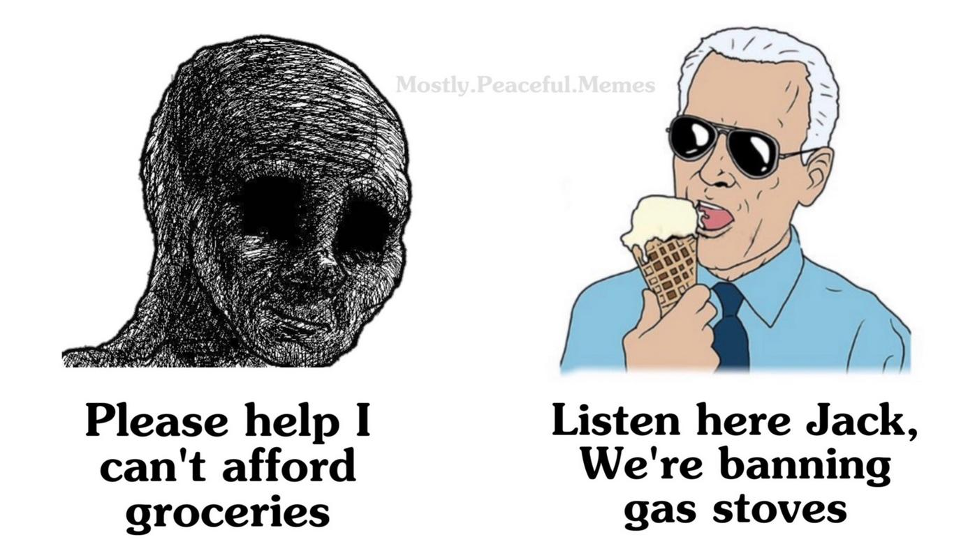 Incredibly, it would be done not on the pretense of climate change — but rather on “safety” for “the children.”

“Products that can’t be made safe can be banned,” says Richard Trumka Jr., one of five commissioners on the Consumer Product Safety Commission.

The CPSC is looking to ban gas stoves on the grounds that they emit pollutants like nitrogen dioxide that are linked to respiratory illness. Advocates of a ban are pointing to a recent study blaming gas stoves on 12% of childhood asthma cases. [Given everything that’s happened in the last three years, you can be forgiven for casting the side eye toward any form of medical research.]

Trumka’s statement to Bloomberg News might be nothing more than a trial balloon — to see how badly it would get roasted on social media. Or sauteed, as the case may be… 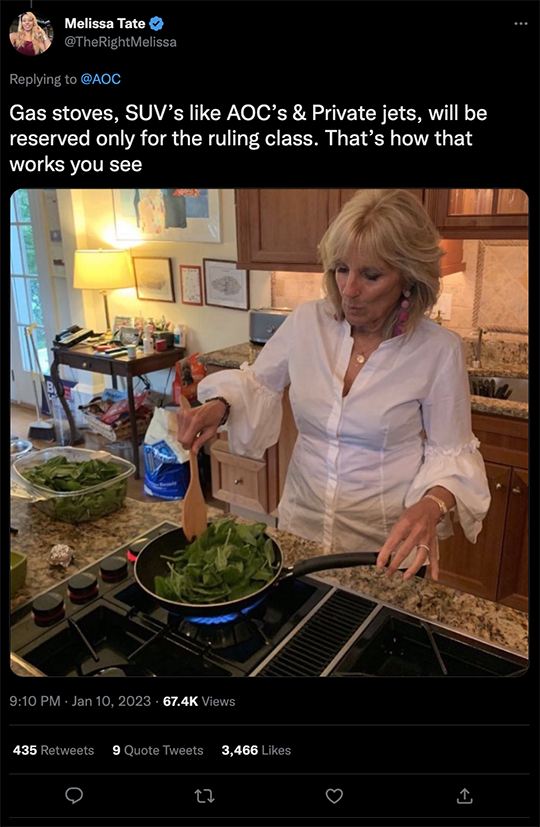 Presumably you wouldn’t be mandated to rip out your existing gas stove — a tall order, considering they’re used in about 40% of U.S. homes. But new gas stoves would be verboten if the do-gooders get their way.

“Buildings are the largest source of emissions in our state, accounting for a third of our greenhouse gas output,” she said in her state-of-the-state address yesterday. Bloomberg says it would be the first statewide ban in the country, to be implemented between 2025–2030.

Maybe this scheme would work, kinda-sorta, in New York City — where, in fact, a ban on natgas in new construction is being phased in over the next four years.

But in Syracuse — where it typically snows 128 inches a year (more than Buffalo)? Or the North Country — where the typical nighttime low in Watertown this time of year is 10 above?

And even if they did, does New York’s electric grid have enough capacity to support the added demand?

➢ When a cold snap hit Tennessee over the holidays, the Tennessee Valley Authority resorted to rolling blackouts. The TVA claimed “unprecedented” cold weather gave it no choice… but it’s been colder in years past. The difference this time is that the TVA has shut down eight of its 12 coal-fired power plants… and it hasn’t built out enough capacity from other sources to make up the deficit.

Speaking of coal, let’s head to Europe next… 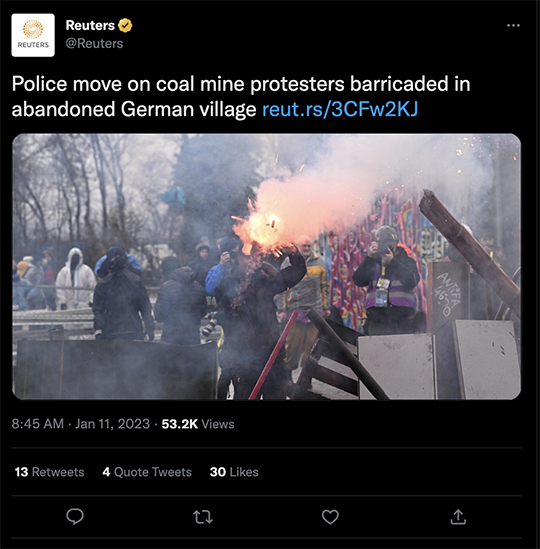 This story is just nuts. Begin with the fact that the loss of natural gas supplies from Russia has prompted the green-minded German government to reopen some of its coal-fired power plants.

Some of that coal is sourced domestically — from the huge Garzweiler mine in North Rhine-Westphalia.

The mine is undergoing expansion; in fact, it sounds as if the inhabitants of a village called Lützerath were forced from their homes to make way for the mine. According to Germany’s state broadcaster DW, “There are no permanent residents currently living in the village, which is now within an exclusion zone after local authorities gave permission for the clearance to go ahead.”

Enter the climate-change protesters — still convinced that Germany’s destiny lies exclusively in wind and solar, and the sooner the better.

For days now, they’ve been forming human chains around the village… but today, the cops moved in.

“Some protesters tried to stop others from throwing beer bottles at the police,” says a Reuters dispatch. “Police said the protesters had also begun throwing Molotov cocktails and stones.”

Wait a minute: A Molotov cocktail is typically made with… something derived from fossil fuel… right?

Yeah, we’ve got nothing else to say about this one.

We’ll delve into a little more energy insanity later on — including a surefire investment opportunity playing off all the madness — but first, let’s turn to the markets…

As it happens, energy is headlining the big market moves today.

Crude is up over 3% after the Energy Department’s weekly inventory numbers. A barrel of West Texas Intermediate fetches $77.40 as we write — a handsome recovery to levels last seen a week ago yesterday.

Copper, meanwhile, has crested $4 a pound this week for the first time in six months. That’s mostly a China-reopening story… but it’s highly relevant to energy given copper’s role in a “green” economy. For example, an electric car uses up to four times the amount of copper as an internal-combustion vehicle. So going forward, EV makers will face more competition from Chinese copper users.

➢ Meanwhile in Washington: According to Axios, Treasury Secretary Janet Yellen will stay on for the remainder of Joe Biden’s term. Last summer, we speculated she was a goner because she failed to anticipate that inflation would prove so sticky in 2022. But inflation didn’t materialize as a huge issue in the midterm elections, so it appears all is forgiven.

Precious metals are treading water, gold at $1,874 and silver at $23.43. Which brings us to our green-related investing angle…

If the powers that be are determined to go green… there may be no better investment opportunity than silver.

Researchers at the University of New South Wales in Australia have published a paper suggesting that silver demand for photovoltaic solar panels is on track to use up at least 85% of global silver reserves. “The rapidly growing solar industry could exhaust much of the world’s known silver reserves by 2050 or even earlier,” says an article summarizing the paper at PV Magazine.

In fact, the researchers say newer solar-panel technology will require even more silver — “posing price and supply risks,” they write.

Alternative technologies do exist… but the changeover would be costly and even if it takes place, that will only increase demand for copper. And as we suggested above, there’s already ample copper demand out there.

Recycling old solar panels will be a source of silver, yes… but as the PV Magazine article points out, “it may still be several decades before the volume of PV waste processed each year is enough for more than a marginal contribution of new silver.”

Silver looks really great below $24 an ounce. It might get cheaper still in the early part of 2023, especially if there’s a stock-market washout and deep-pocketed investors need to sell silver to raise cash… but for the rest of the 2020s it looks nearly unbeatable.

This isn’t strictly “green” related… but Midwestern gasoline prices are set to jump this spring thanks to the ongoing ethanol boondoggle.

Right now the federal government is reviewing a request from seven Midwestern governors to boost usage of corn-based ethanol — specifically the E15 blend that consists of 15% ethanol.

Just great: At a time of global food shortages, we’re going to turn even more food into fuel.

“If adopted,” Bloomberg reports, “it could be good news for corn farmers throughout the region, including the politically important state of Iowa. But it would also force oil refiners supplying the Midwest to provide a specialized gasoline grade and construct new storage tanks and other infrastructure.

“That has the potential to increase costs, which would likely be passed on to consumers already squeezed by soaring inflation.”

Conservative estimates have the scheme adding 2 cents a gallon to the region’s gas prices. The energy industry’s estimates are much higher.

This scheme is being pushed by the governors of Illinois, Iowa, Minnesota, Nebraska, South Dakota and Wisconsin. So “conservative” heroine Kristi Noem in South Dakota is running this BS right alongside fat-ass billionaire tyrant J.B. Pritzker in Illinois. Bipartisanship, baby!

“The EPA has little discretion to completely deny the governors’ request,” says Bloomberg, “though the agency can postpone the change for at least a year — and renew the delay for two more — if it concludes there is insufficient gasoline supply.”

Uhhh… for a ski resort that advertises itself as “sustainability on the slopes,” this looks anything but… 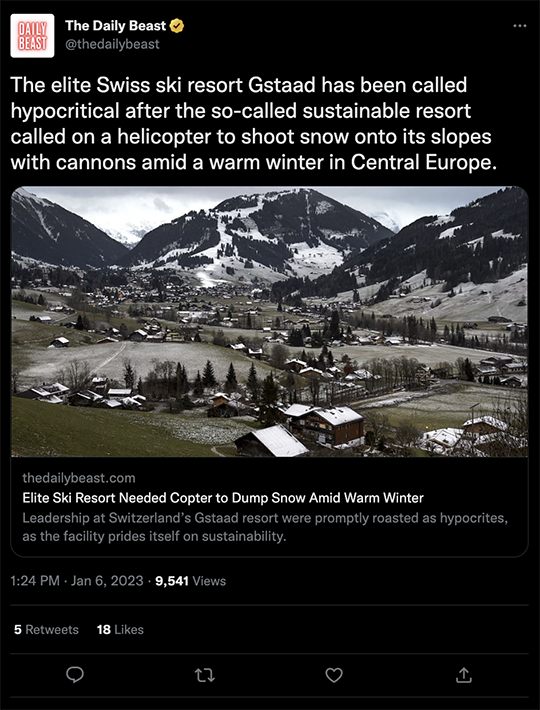 Late 2022 and early 2023 have been unusually mild in Europe — so mild that many Alpine ski slopes were bereft of snow.

Switzerland’s high-end Gstaad resort found that even its artificial snowmakers couldn’t keep up. So management decided to… have it flown in by helicopter.

Understand that Gstaad makes a big honking deal about its commitment to “decreasing the difficult-to-avoid emissions resulting from skiing activities”… so the hypocrisy is just too much. “What’s the CO2 footprint of snow transported by helicopter?” tweeted Swiss “climate researcher” Parodik Winiger.

And it didn’t even work: “Loading and unloading the snow was too complicated,” says resort director Matthias In-Albon, “and the amount of snow per flight too small.”

Like they couldn’t have run the numbers in advance? Even more wasteful!

In any event, it should be back to business as usual soon: This week, Europe’s warm spell is over. “Cold but crystal-clear,” writes colleague Sean Ring from his post in the foothills of northwestern Italy.

To the mailbag: “I do love Zach Scheidt and his investment approach,” writes one of our most longtime readers — after Zach said Southwest Airlines will bounce back from its holiday debacle.

“I even agreed initially with his assessment (and Buffett’s) that if it is a one-time solvable event, then a crisis can make a good investment.

“As I started due diligence of my own, and read the copious firsthand accounts of the causes from insiders themselves, it became clear this was not a one-time solvable event.

“This event really had nothing to do with the huge winter storm affecting the country. Most other airlines were fully recovered within a few days. This was due to 30-plus years of under- or no investment in technology. I won’t go into the crazy stories of how antiquated it was.

“The CEOs and the board that were complicit in those catastrophic decisions are still there. Until that changes, I don’t see this as having been solved yet.

The 5: We’ll see in the fullness of time.

To be sure, airlines are among the worst corporate welfare queens out there. Not only is there the aid they got during lockdown in 2020… American and United were retroactively excused of liability for their security lapses on Sept. 11, 2001.

With that kind of a tailwind, airline suits and directors can get away with a lot and not necessarily have it show up in the share price.

Given the nationwide ground stop making news this morning… the biggest threat to the airline sector might be government malfunction!