“Is America, the economy or anything better off than in February 2020?” asked Paradigm Press executive publisher Matt Insley during our Wednesday conference call earlier this month.

In February 2020 there were daily headlines, mostly from overseas, about a novel strain of coronavirus. But they were mostly background noise. It was the following month when everything went to hell.

“Everything is worse. So why should the S&P 500, the bellwether of the stock market, be better?”

For perspective, please inspect a chart of the S&P going back three years… 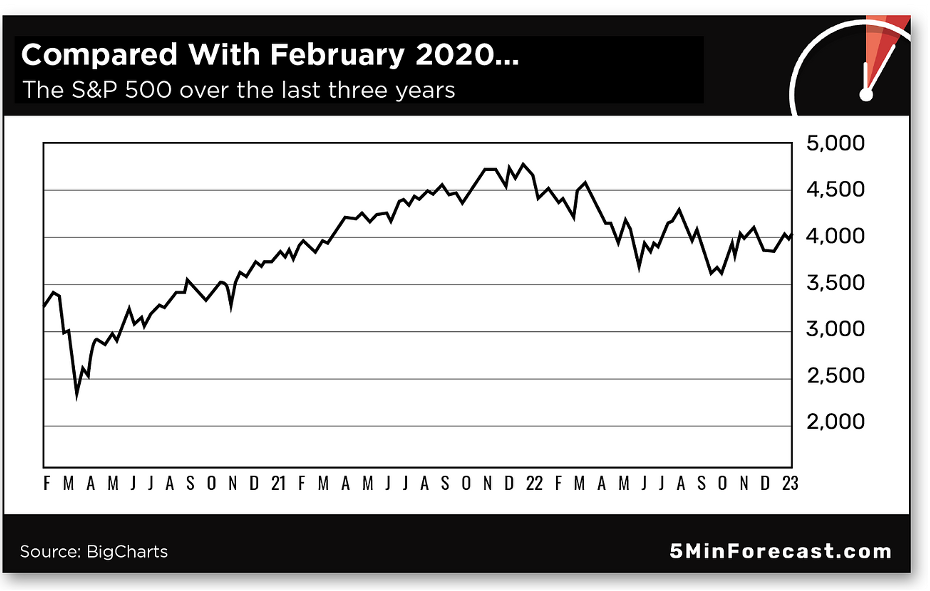 The index set record highs in February 2020 around 3,400. Then came the sickening 34% plunge to nearly 2,200 in only five weeks — which ended the day the Federal Reserve went all-in on stimulus measures. Or as we said at the time, “the 2008 playbook, on a cocktail of steroids, Adderall and meth.”

The drugs had the intended effect: It was up, up and away — the S&P peaking just under 4,800 at the start of 2022. At no time since has the index slipped below that February 2020 level.

Understand, the point of Matt’s rant was not that the stock market “should” be lower.

“Should” is one of the most dangerous words in all of investing. You could have made a plausible argument through most of 2021 that the stock market was overpriced and “should” be lower — but if you’d acted on that conviction by shorting the market, you’d have lost your shirt.

Matt was, as is his wont, trying to stimulate discussion.

Which brings us to an important point if you have more than one Paradigm Press publication — or if you have just one but you see sales promotions for others.

Unlike some financial publishers, we’ve never enforced a “party line” around here. We don’t expect our editors to sing from the same bullish or bearish choirbook.

On the contrary, we want them to perform the most rigorous research possible… reach a definitive conclusion… and then defend that conclusion with every fiber of their being. You pay good money for your subscription(s). You deserve no less.

If you encounter diverging opinions, we respect your intelligence enough to weigh those opinions and come to your own conclusions.

Still, the question lingers: How do you square the circle of an S&P 500 substantially higher than it was three years ago — while America, the economy, everything is seemingly worse?

Consider our macro maven Jim Rickards’ 2023 outlook that we shared earlier this month: He believes the Federal Reserve will “pivot” to lower interest rates midyear not because the Fed achieved the proverbial “soft landing” but because the Fed crashed the airplane and plunged the economy into a deep recession. If it’s not obvious now, he believes it will be soon enough.

“A sharp recession is disastrous for stocks,” Jim said. “Stock markets could fall 30% or more from current levels.”

Another 30% drop from there would drag the index below 2,700. As you can see from the chart above, that would be a lower level than the pre-pandemic peak in February 2020.

On the other hand… if Jim’s forecast were to pan out, it would be a historical anomaly.

Alan Knuckman, our eyes and ears in the Chicago options trading pits, made this point on our conference call last week: “Every time there’s been a selloff more than 20%, only two other times has the market followed up with a negative year — and the average bounce after a bear market is 24%.”

Too, don’t forget we’re in earnings season — and the expectations bar is mighty low. “Earnings expectations for this season are essentially zero,” Alan told readers of The Profit Wire last week. “They used to be about 3.5% back in September. Now they’ve lowered those expectations to minus 4% earnings growth. So anything good would be very positive to the market.”

And then there’s the present volatility in the market — or lack thereof as seen in the VIX, a measure of market volatility popularly known as the “fear gauge.” 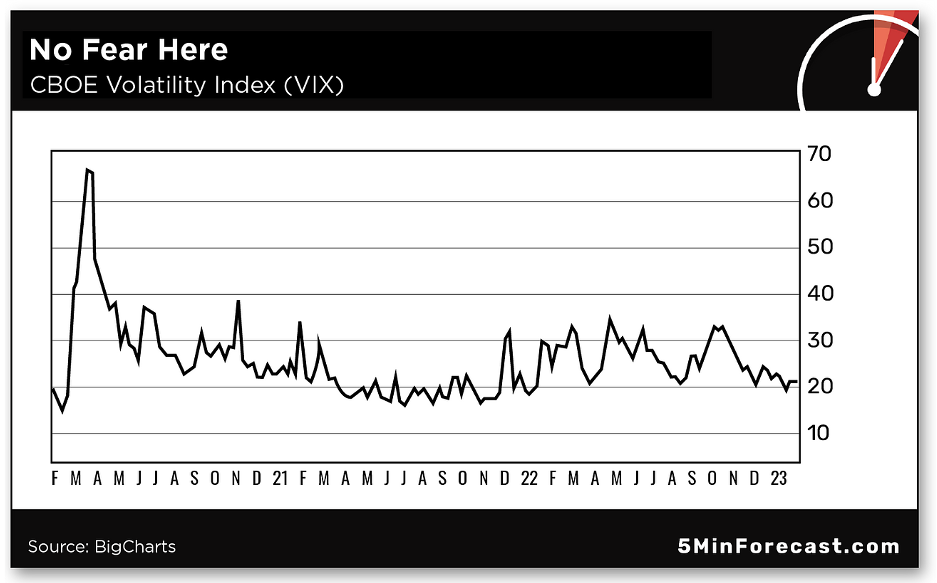 “I can’t talk enough about it,” said Alan. “New one-year lows were made last week at 18 in the VIX. So we have come a long way down, down more than half of where we were late last year. We still have a lot more bullishness in stocks and a lot more downside in the fear factor.”

Back to the question: Why is the S&P holding up so well when everything else looks terrible?

This will sound like a cop-out, but it’s not: The whys don’t matter. It just is — whether you think the current level of the S&P is justified or not. (Again, the dangers of “should.”)

The only question that matters is what you do in the face of that reality. Presumably, that’s why you subscribed to one or more of our publications — actionable guidance, not just an opinion about whether the market is vulnerable or resilient.

Whatever you decide, we thank you for putting your trust in a Paradigm Press newsletter and/or trading advisory. Our editors take their responsibility to you, the reader, seriously. After all, you’re their bread and butter.

After a slide at the start of the day, the major U.S. stock indexes are back to breakeven — none of them moved more than a tenth of a percent either way.

The big economic number of the day isn’t as disappointing as feared: The “flash PMI” rose from an anemic 44.7 in December to 46.6 in January. That said, anything below 50 still suggests shrinking economic activity.

Recent layoffs notwithstanding, Microsoft and Google aren’t slacking on their investments in artificial intelligence technology.

Yesterday, Microsoft confirmed the worst-kept rumor in the tech space this month: It’s making a multibillion-dollar investment in OpenAI — the startup behind the chatbot called ChatGPT.

MSFT didn’t disclose exact terms, but the buzz around Wall Street is $10 billion spread across more than one year. Potential uses, according to The Wall Street Journal, range from “its design app Microsoft Designer to search app Bing.”

“OpenAI, however, has seemingly come from out of nowhere and stolen some of Google’s thunder. It’s come to the point that Google has reportedly called in founders Larry Page and Sergey Brin for help in developing and commercializing the company’s tech.

“Google’s massive search business is at risk if AI assistants can come in and answer user information queries better. That said, Google is planning to release several AI-accelerated products at its I/O conference in May.”

All that AI capability demands more powerful chips… and Ray says Nvidia and Intel are poised to deliver, “bringing Intel’s latest CPUs and Nvidia’s most powerful GPUs together to increase data center efficiency and run hard-core AI systems for less.”

NVDA is currently a “hold” in Ray’s Technology Profits Confidential portfolio, while he still sees plenty of long-term upside ahead for INTC. (Both companies are so huge, we don’t think we’re doing a disservice to Ray’s paying readers by mentioning them here.)

Business as usual, 2023 style: We present the following with no further comment… 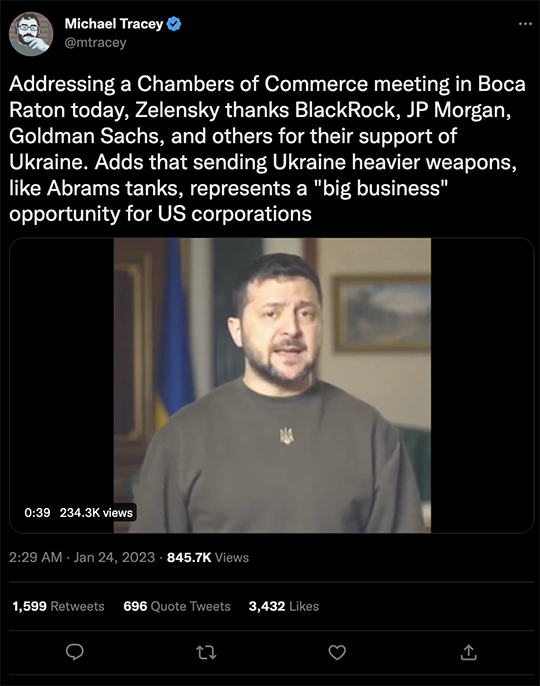 To the mailbag: “Great piece on mass formation!” a reader enthuses.

“Very timely too. Thank you for reminding us of it and the prescriptions for its demise!”

The 5: After we published on Friday, The Guardian posted an article over the weekend spotlighting the growth of the non-churchgoing population. The trend’s been underway for years, but the evidence suggests it was “probably accelerated by COVID.”

“The closures, even for a temporary period of time, impacted a lot of churches,” says Scott McConnell, executive director of Lifeway Research — which finds attendance at the typical Protestant church at only 85% of pre-lockdown levels. “People breaking that habit of attending church means a lot of churches had to work hard to get people back to attending again.”

It’s not the case everywhere, though: In my neck of the woods, churches in two towns have taken over locations previously occupied by a now-defunct discount retailer.

Finally, a follow-up note from a dissatisfied reader…

“I was one who recently noticed the non-reported trade on Goldman Sachs put options in your publication.

“I live in Australia and as a result it took nearly eight weeks to set up a process that would navigate the complexities of investing in put options overseas. Consequently I missed the earlier recommendations that were profitable for the most part and lost money on the most recent.

“To find out that there is a parallel service offering different put options from ostensibly the same authors is a low act. You continually offer upsells to the point of nausea. To make a decision to subscribe and only participate in the scraps really annoys me. If this behavior isn’t illegal it bloody well should be.”

The 5: Again, apologies on this end for my confusing which of the Rickards publications had the GS trade. We’ve forwarded your note to our executive concierge Dustin Weisbecker.

But — and I bring this up because you might not be the only one wondering — Jim Rickards has three high-end trading advisories, each with its own unique investment approach. Here’s how they differ…

Hope that makes things a little clearer. Throughout 2022, we heard one thing over and over — demand for more opportunities from Jim. He’s been happy to oblige with a variety of trading services, each with different strategies and tactics, depending on the reader’s needs and comfort level.

Thanks for hearing us out. On the docket for tomorrow (tentatively, always subject to change) — how Washington’s weaponization of the U.S. dollar is backfiring spectacularly…