“The U.S. dollar is a hex on all of us,” said Singapore’s former foreign minister George Yeo at a conference in Singapore earlier this month.

On hand were economists, fund managers and ex-government officials from throughout Southeast Asia — countries by and large in Washington’s orbit, like Indonesia and the Philippines. And yet Yeo found a receptive audience.

“If you weaponize the international financial system,” he said, “alternatives will grow to replace it.”

Perspective from Paradigm Press macro maven Jim Rickards: “If friendly countries in places like Southeast Asia join serious rivals such as Russia and China in reducing their reliance on the U.S. dollar, it can only mean a weaker dollar and possibly more inflation ahead.”

We’ve been hearing more about a “weaponized dollar” ever since Russia invaded Ukraine last February.

The move by Washington and Brussels to freeze Moscow’s foreign-exchange reserves sent a chill down the spine of leaders in — well, pretty much everywhere other than the Anglosphere countries, the European Union and Japan. If it can happen to Russia, it can happen to us.

No one in Washington will admit it — not publicly, anyway — but the weaponized dollar has misfired badly. Some of the developments that have taken place in the last 11 months…

And the biggest development of all came last month. But we’re getting ahead of ourselves here…

Around the globe, the weaponized dollar is accelerating the push toward de-dollarization.

Here at The 5, the term “de-dollarization” first came on our radar in May 2014. Russian state media reported on what was labeled a de-dollarization meeting among top Russian officials, ahead of a summit between President Putin and Chinese President Xi. The two leaders signed a $400 billion natural gas deal that, by most accounts, was executed using yuan and rubles — not the world’s reserve currency, the dollar.

Important context: These meetings took place only months after Washington engineered a regime-change operation in Ukraine during February 2014. Moscow responded by seizing the Crimean Peninsula… and Washington retaliated with a host of sanctions.

By 2018, de-dollarization was no longer a niche thing confined to e-letters like ours. Even CNBC started talking about it.

“In the coming years the dollar will be facing a barrage of attacks with the goal of eroding its hegemony,” said an article on CNBC’s website penned by Gal Luft of the Institute for the Analysis of Global Security.

Mr. Luft wrote that Washington is “waging economic warfare against one-tenth of the world’s countries…

“These include Russia, Iran, Venezuela, Cuba, Sudan, Zimbabwe, Myanmar, the Democratic Republic of Congo, North Korea and others on which Washington has imposed sanctions over the years, but also countries like China, Pakistan and Turkey, which are not under full sanctions but rather targets of other punitive economic measures.”

All told, we’re looking at countries comprising more than a quarter of the globe’s population and economic output nearly equal to that of America’s.

The potential consequences? “Bull markets eventually come to an end,” Luft wrote, “and with a [U.S.] national debt of $21 trillion and growing at a rate of a trillion dollars a year, the awakening could be ruder and sooner than most economists predict.”

The awakening hasn’t happened just yet… but in less than five years the national debt has ballooned to $31.4 trillion while Washington went nuclear on Russia’s forex reserves. The awakening is that much closer. 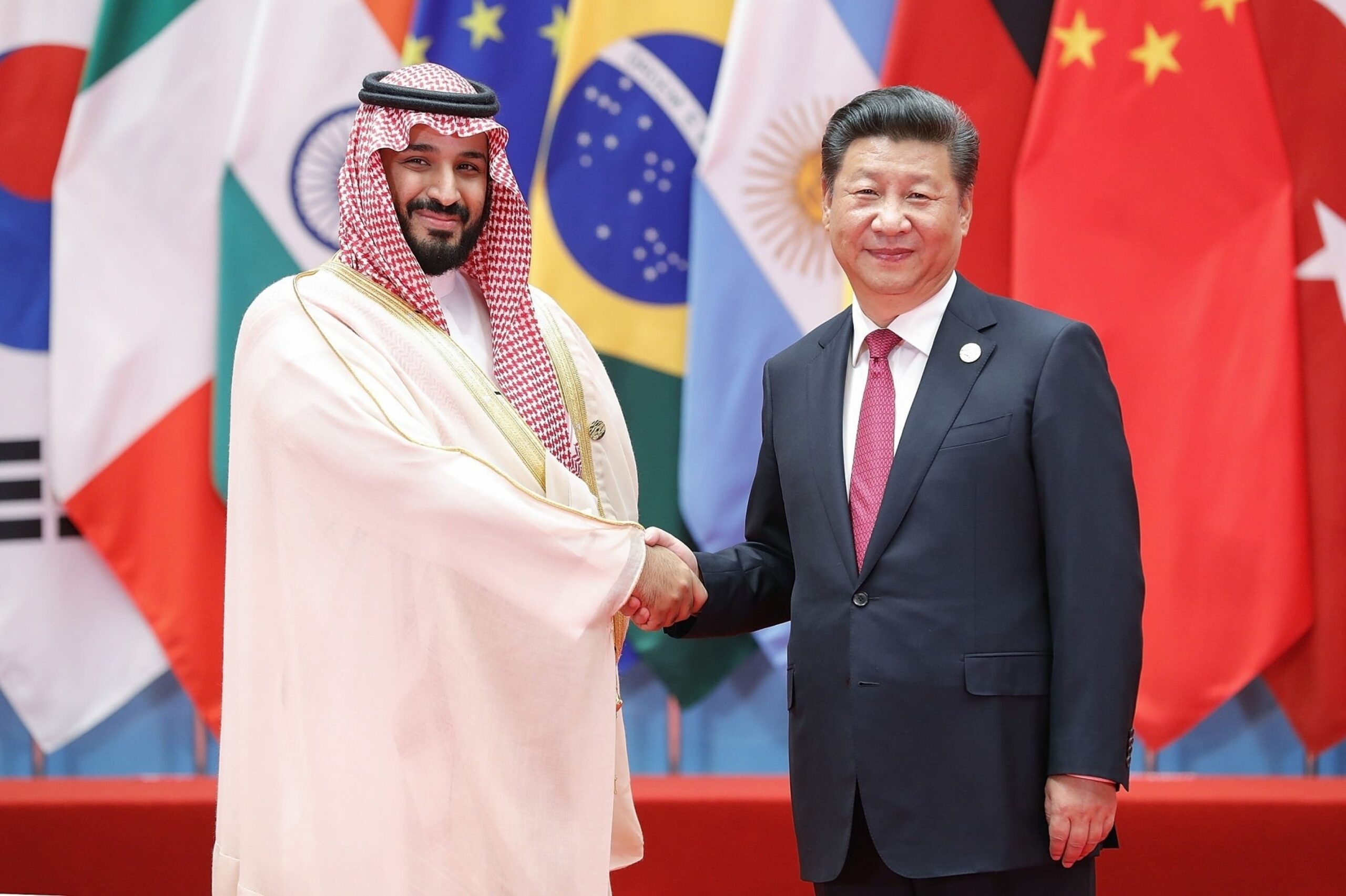 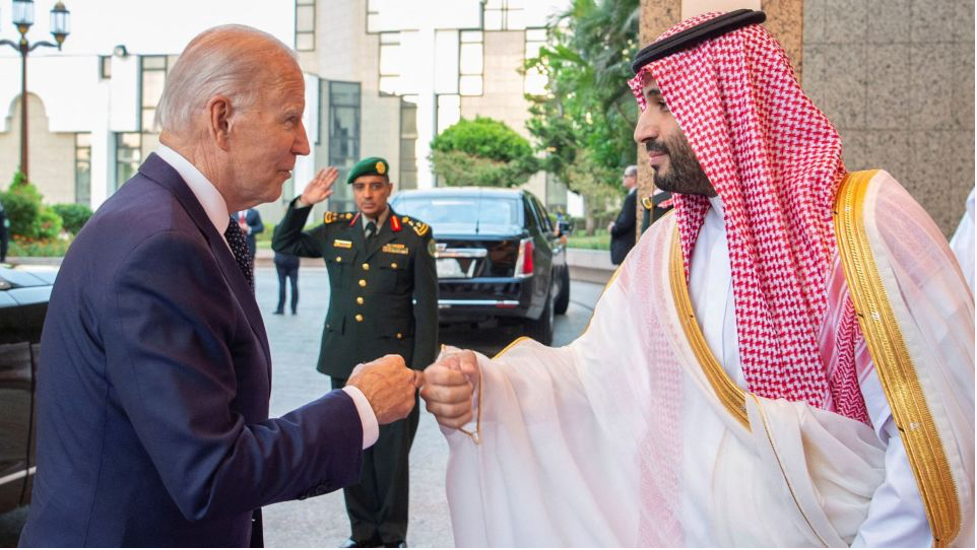 … in contrast with the tepid fist-bump between MBS and Joe Biden five months earlier.

“Xi’s message was clear. The Ukraine crisis has laid bare a world buffeted by turbulence and undergoing a radical transformation. As such, it falls on China, Arab states and many other countries to shape the new era.

“The underlying message to the Saudis and other Arabs was that China, unlike the United States, will not dictate, influence or compromise Arab policies and prosperity,” Rabil continues.

“China and the Arab states will grow their relationship on the basis of respect, equality, solidarity and non-interference in each other’s domestic affairs. Dozens of agreements worth billions of dollars were signed covering a wide range of sectors, including in the ‘fields of green energy, green hydrogen, photovoltaic energy, information technology, cloud services, transportation, logistics, medical industries, housing and construction factories.’”

But most importantly, Xi reacted warmly to Saudi Arabia’s overtures about selling oil and gas to China in exchange for yuan… and it appears the rest of the oil-rich Gulf monarchies are also on board.

That one move, Rabil writes, “would establish the yuan as a major international currency and therefore weaken the U.S. dollar’s grip on world trade.”

Cue the freak-out among the power elite.

Pozsar is a highly connected veteran of the New York Fed and the Treasury Department with a reputation for startlingly accurate forecasts — starting with his prediction in 2019 that the market for repurchase agreements, or “repos,” would freeze up. It did, sending shivers throughout markets worldwide that September.

From Foroohar’s column: “According to Pozsar, ‘China wants to rewrite the rules of the global energy market’, as part of a larger effort to de-dollarize the so-called Bric countries of Brazil, Russia, India and China, and many other parts of the world after the weaponization of dollar foreign exchange reserves following Russia’s invasion of Ukraine.”

Even more important, the previously unthinkable notion that the yuan could replace the dollar as the globe’s reserve currency is starting to look plausible.

For a long time, the knock against this idea was that China doesn’t have anywhere near the deep and liquid bond market that the United States does. “Correspondent banks” rely on a deep and liquid bond market to grease the wheels of transactions between a bank in one country and a bank in another country. Without that, there’s zero chance of knocking King Dollar off the hill.

But according to Zoltan Pozsar, Beijing now has a potential workaround: Create a deep and liquid bond market from scratch with a CBDC, a central bank digital currency.

Pozsar got his own guest column in the FT last week explaining how this would work. “Around the world but particularly in the global east and south, CBDCs are spreading like fast-growing kudzu vines with more than half of the world’s central banks exploring or developing digital currencies with pilots or research, according to the IMF. They will be increasingly interlinked.

“The emerging, CBDC-based network — enforced with bilateral currency swap lines — could enable central banks in the global east and south to serve as foreign exchange dealers to intermediate currency flows between local banking systems, all without referencing the dollar or touching the Western banking system.” [Emphasis ours.]

So there you go: The weaponized dollar keeps misfiring… and Beijing now is building a framework that could dethrone the dollar altogether. So what do you do about it?

In case you missed this development toward the end of last year, it bears repeating now: According to figures from the World Gold Council, central banks around the world accumulated so much gold during the first three quarters of 2022… it already set an annual record. (And the records go back to 1967.)

And yes, it’s a reaction to the weaponized dollar. As the U.K. Telegraph put it, “A record central bank gold rush has been triggered by fears of Western sanctions after Russia was made a pariah state in the wake of its invasion of Ukraine.”

Asks the Irish economist and investment pro Philip Pilkington: “What if these purchases signal the beginning of the end of the paper dollar as the global reserve currency?

“It seems unlikely that the countries buying gold are going to try to give their currencies gold backing. But it appears probable that the immediate cause of the rush for gold is an attempt to diversify out of dollars. Since the United States seized Russia’s dollar reserves after the invasion of Ukraine last year, other countries have grown distrustful of holding dollars as they fear that they, too, could see their reserves seized in the future. Hence the race for gold.”

We give the last word to our own Jim Rickards: Expect “much higher gold prices,” he says — “because gold is the only alternative to dollars or other currencies such as the euro that can be weaponized” against other countries.

P.S. Thanks for indulging us a heavy single-topic edition of The 5 today.

As we go to virtual press, the stock market is selling off, but not too badly: The Dow is off about a quarter percent, the Nasdaq is down about three-quarters of a percent. The S&P 500 splits the difference, down a half percent and just below 4,000.

Microsoft sold down hard on the open after issuing its quarterly numbers: The company logged its slowest sales growth in over six years and, more importantly, “guided lower” for 2023. But at last check, MSFT is down only a quarter percent on the day.

For the moment, markets are unfazed by the impending shipment of American and German tanks to Ukraine — a worrisome development in the process of “escalation” we’ve been warning about since last spring. 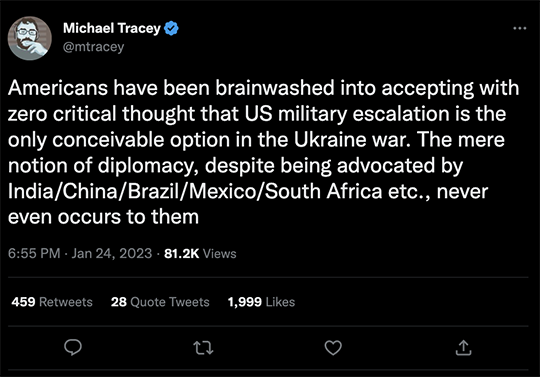 Hang in there. Tomorrow we have more cheerful stuff in the form of green-energy madness. Wait till you get a load of the plans for a “Just Transition” in Canada. Coming to a country near you?