A question you might entertain in years to come: “Where were you when SpaceX first launched astronauts into space?”

Among the weekend’s news that ranged from the pedestrian (more COVID-19 chatter) to the disheartening (rioting in several U.S. cities), the partnership between Elon Musk’s private company and NASA marked a new era in space exploration… 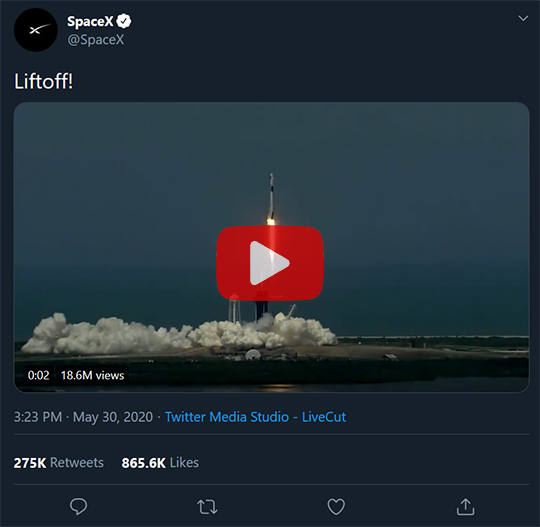 If you happened to catch the Saturday-afternoon launch from Cape Canaveral, you probably held your breath as astronauts Bob Behnken and Doug Hurley made it safely out of Earth’s atmosphere, bolting into space aboard the SpaceX Falcon 9 rocket

This about sums it up… 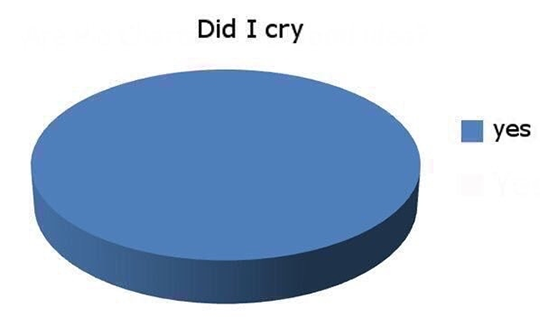 So while Dave talked about collective traumas Friday, maybe Saturday’s rocket launch was a collective catharsis.

Aside from the emotional release…

Our science and technology maven Ray Blanco notes the SpaceX-NASA mission was the “first launch of astronauts from U.S. soil in nine years.

“July 8, 2011, marked the last day a space shuttle launched from U.S. soil,” he says. “At the time, NASA’S space shuttle program had ended.”

Because the U.S. was still clawing its way out of the Great Recession, space travel was a little rich for a government agency to justify. “We relied on Russian vehicles to deliver our scientists to the International Space Station,” Ray says. “And people were left wondering what the future held.”

Around that time, “NASA started contracting with several private companies to help deliver essential supplies and materials into space,” says Ray. “And despite some hiccups along the way, in 2012 SpaceX became the first private company to resupply the ISS.”

So in light of Saturday’s historic launch, Ray says: “Ask yourself, ‘What does this mean for me?’”

Ray believes space technology and innovation is at a watershed moment. “The space launch services market is currently worth around $10–12 billion,” he says, “but is expected to almost triple in value to over $32 billion by 2027.”

Of course, the holy grail for SpaceX is colonizing Mars (where we think Elon Musk will fit right in. E.M. go home? Just joshing… the brilliant bastard). “That quest alone will be worth tens of billions in new market interest and investment,” Ray says.

“But that’s only one small part of the whole equation,” he continues. “We’ve just begun to imagine the full potential of space technology. There’s space tourism, ultra-fast flights through space and even global high-speed internet.

“And there are plenty of companies out there right now that will profit from the rise in demand for space tech and the race for space domination.”

Ray’s takeaway? “Times like these don’t come around very often,” he says. “The potential… is like no other emerging industry I’ve ever seen.” To Ray’s way of thinking, he’s talking beyond the growth potential of Apple Inc. circa 1980… or Amazon when it was just a discounted bookseller.

“So don’t wait,” Ray says. “Jump in on this while we’re in the early innings…”

The CBOE is reopening its options trading floor on June 8 after remaining closed more than two months due to the coronavirus pandemic,” says our CBOE trading vet Alan Knuckman. This after the New York Stock Exchange opened six days ago — post-antibacterial scrubdown, we presume.

The CBOE’s trading pits, however, haven’t looked like the panorama of humanity for a long time… 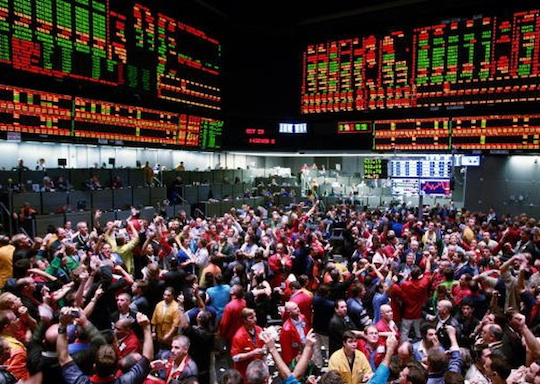 The CBOE was practicing social distancing before that was even a thing. “Truth be told,” says Alan, “the exchanges have been evolving… The advent of electronic trading changed everything.” As of today, there are just two CBOE pits open for trading, and they cater to complex hedge funds related to the proprietary SPX and VIX.

Per Alan, “The good news is that technology has opened the former ‘boys club’ of opportunity to the masses,” he says. “All you need is a computer and an internet connection and you’re well on your way to beating the old-school pros at their own game.”

While high-end and middle-of-the-road retailers have been shot to hell (think Neiman Marcus, J. Crew and J.C. Penney bankruptcies), “discount stores have continued to thrive, with extreme discounters such as dollar stores taking the lead in the markets,” Greg says.

“Several weeks ago,” he continues, “Dollar General Corp. (NYSE: DG)… posted new highs. The discount chain had already jumped 35% off its March lows and was consolidating in the $180 range. 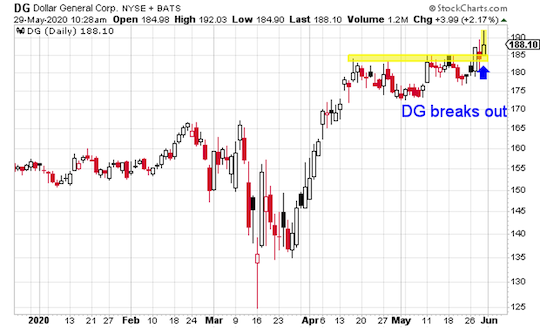 “Thanks to a timely earnings beat… last week, DG was able to achieve this upside breakout,” says Greg. “The next leg of the DG rally has kicked into gear.”

For the unsightly (but less-ugly than April) economic number of the day, we turn our attention to May’s ISM U.S. Manufacturing index.

The Institute for Supply Management (ISM) said Monday its index of national factory activity rose to 43.1 in May, up from 41.5 in April… or the lowest level since the bad ol’ days of April 2009. (April is the cruellest month?) Recall a reading below 50 means manufacturing — that accounts for 11% of the U.S. GDP — is contracting.

As bad as all that, May’s number marked the first increase since January, suggesting April might have been the low-water mark for the economy. Fingers crossed…

While the economy is still reeling from the coronavirus lockdown,” says our income authority Zach Scheidt, “the market keeps trending higher.

“The S&P 500 crossed over 3,000 points. The Dow is now trading above 25,000 points. And the Nasdaq Composite just turned positive on the year.” At the same time, millions of Americans continue to file for unemployment while many businesses are fighting tooth and tail to survive.

“How could this be?” says Zach. “Why isn't the market still trending lower?” A few educated guesses?

“Of course, the Fed has cut its target interest rate to zero,” Zach notes. “It's also buying bonds — including corporate bonds — which is a huge help for companies that need to borrow money to stay afloat.

“The government is sending stimulus checks to most Americans, even those who are still fully employed,” he continues. “And unemployment benefits have been boosted, leaving eligible consumers with more money in their pockets.

All of these policies are part of the new ‘unconomy,’” Zach says, “where workers are being paid to stay home, and many unemployed are now receiving more than they were when they had jobs.

[The 5 noted Friday how Americans, among other things, are saving their stimulus money at levels not seen since Eddie Haskell was kissing up to Mrs. Cleaver.]

Zach says: “The real rocket fuel behind this market rally has come from fear. More specifically, it’s coming from fear of missing out.” FOMO! He expects American investors with sidelined cash to become increasingly frustrated as stocks trade higher and higher.

“All of this extra cash just waiting to be invested in the market is helping to put a floor under stocks,” Zach says. “And it will continue to support the stock market until the majority of the cash people are holding finally finds its way back into the market.”

Not to say there won’t be any more market pullbacks… with this caveat: “It’s extremely unlikely we’ll see a major drop back to the lows we hit in March,” Zach concludes.

In the aftermath of COVID-19, if the future of restaurants looks sterile, it’s also starting to look utterly bizarre…

While restaurants in the U.S. are solving the restaurant social-distancing conundrum by allowing al fresco dining for now, a French designer’s concocted a more permanent solution — “domes that cocoon its occupants in romantic isolation from the rest of the room,” The Irish Sun says.

Coming to a restaurant near you? 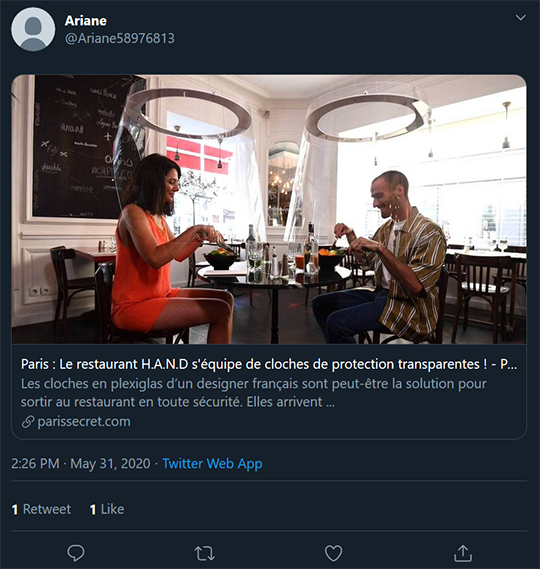 “Christophe Gernigon has created a cylinder of transparent plastic that hangs from a cable on the ceiling, much like a lampshade. A scoop cut out of the back allows the diner to sit and stand up without having to bend over double.

“Gernigon has called them the Plex'Eat and said that he was inspired to invent something different to what is already on the market, which looked like booths in prison visiting rooms.”

Of course, a cheeky bugger at Fark notes Monsieur Gernigon might have been inspired by something else altogether… 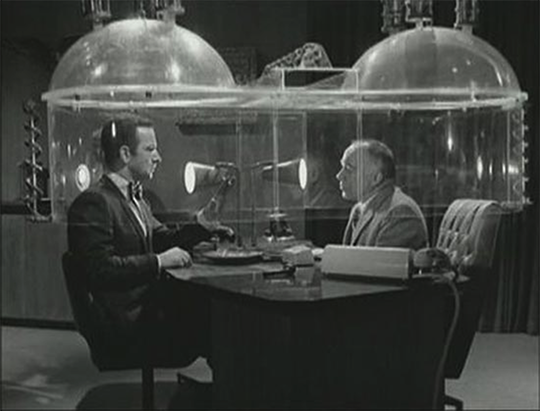 The “Cone of Silence” was a running bit on the secret-agent spoof Get Smart. The gag was that Maxwell Smart insisted on communicating with his handler using the cone… but Maxwell and the Chief strained to hear each other. Hijinks ensued.

It always ended with the exasperated Chief saying, “Raise the cone of silence!”

For what it’s worth, we’ll echo the Chief… and say oui to carryout!

Mike Pompeo lied about Hong Kong being a fully autonomous region!” a reader references Friday’s episode of The 5.

“According to the Hong Kong Basic Law as structured by the U.K., Hong Kong is a semiautonomous region for 50 years; thereafter, Hong Kong will become one country, a one-system region. All the newly enacted requirements have been in HK Article 23 of the Basic Law from day one. There is nothing new. How can China encroach on HK if HK is part of China?

“Talking about special treatment on trade or other affairs, I don't think the U.S. will jeopardize the trade agreement with Hong Kong that’s already in place. Why? Over the years, the U.S. has established hundreds of businesses in Hong Kong and has been reaping dividends big-time. Do you really think the U.S. will kill the goose that laid the golden egg?”

The 5: At last count, there are about 1,300 U.S. companies operating in Hong Kong, making it the de facto technology hub of Asia. The removal of Hong’s Kong favored trade partner status might cook Hong Kong’s goose. And to our way of thinking, the move only confirms the trade war is really a tech war… the “golden egg” being technological hegemony.

P.S. You won’t hear this incredible prediction revealed anywhere else…

While the media focus on the historic rocket launch, they’re missing a much bigger space story that’s rapidly unfolding… An underlying story that has the potential to change your bank account — for good.

And tech-stock expert Ray Blanco only knows about it because he recently returned from a private meeting that included Elon Musk.

What Musk had to say blew Ray away… click here for details.