While Minneapolis burns and the Trump-Twitter spat escalates, it’s World War III on our minds this morning. Happy Friday!

Yes, we’ll back up a bit: “Geopolitical tensions dented global stocks on Friday,” says the Financial Times, “as investors braced for potential retaliation from Washington after Beijing approved a sweeping national security law for Hong Kong.”

The losses today aren’t huge, but they stretch from Asia to Europe to the Americas. At last check the S&P 500 is down about a third of a percent, still above the 3,000 mark. Supposedly Donald Trump will hold a news conference sometime today “to address the China-Hong Kong tensions,” says Fortune.

World markets are spooked because Washington grants special trade privileges to Hong Kong that aren’t granted to mainland China. Those privileges are now under threat.

Yesterday, China’s legislature signed off on plans to impose a “national security” law on Hong Kong — punishing acts of “treason, secession, sedition or subversion,” in the words of China’s foreign minister Wang Yi.

“The change effectively negates Hong Kong’s autonomous status, which was supposed to last until 2047 — 50 years after Britain’s transfer of the territory to the People’s Republic of China (PRC),” writes Cato Institute scholar Ted Galen Carpenter. “Beijing’s move also is the latest manifestation of China’s ongoing regression into authoritarianism under President Xi Jinping.”

Hong Kongers who oppose the move turned out in protest even before the vote, setting off a police crackdown.

➢ Your editor keeps two or three international news channels within eyeshot throughout the workday. At times this week it’s been hard to tell which protest/riot video came from Minneapolis and which came from Hong Kong.

Secretary of State Mike Pompeo also didn’t wait for the vote before declaring Hong Kong is no longer autonomous and that Hong Kong no longer merits special treatment on trade or other affairs.

But aside from sanctions — a blunt instrument overused by Trump as well as his predecessors — what can the administration do?

“Washington is not going to deploy military forces off of Hong Kong or make similar reckless gestures,” Carpenter writes in The National Interest. “Imposing economic sanctions is likely to hurt Hong Kong as much or more than such measures injure the PRC elites.

“Above all, U.S. rhetoric must not give the people of Hong Kong false expectations that Washington can and will prevent Beijing from imposing direct rule and squashing the territory’s desire for autonomy and democracy.”

On that score, it’s probably already too late — judging by some of the images from last year’s anti-Beijing protests… 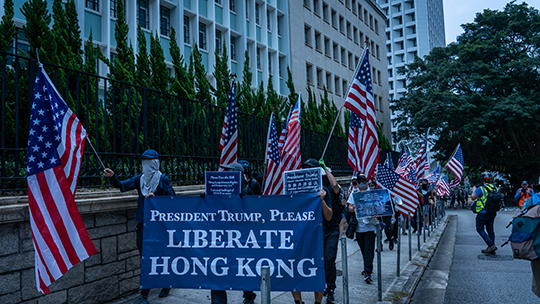 “Fostering such hopes,” Carpenter says, “could encourage a resistance that leads to a Tiananmen Square-style calamity.”

Which we suggested last summer was sort of the whole idea.

Still, the real risk is this: “The breakdown of [U.S.-China] ties would increase the danger of armed conflict regarding several issues, most notably the South China Sea and Taiwan,” Carpenter goes on.

“Such an outcome would be disastrous for both countries and world peace.”

Carpenter’s warning comes as a U.S. guided-missile destroyer sailed this week near some islands in the South China Sea claimed by China as well as its neighbors. Chinese media report that Chinese warships and planes followed the destroyer.

These sorts of face-offs are a routine affair in both the South China Sea and the Taiwan Strait. Last week a top Pentagon official told Fox News of “at least nine” encounters involving Chinese fighter jets and U.S. aircraft since mid-March.

Under those circumstances, the chances of miscalculation are ever-present. But they might be especially worrisome this year in light of “the 58-year hypothesis.”

The hypothesis comes from the historian and demographer John Xenakis. He explained it like this more than a decade ago…

“Suppose that you're a child, between 5 and 10 years old. You're living a happy life… Then something horrible happens — a national event that's so terrible and so unexpected that it changes your life completely. It causes deaths around you or starvation around you… It's an event that's so traumatic to you that you will remember it vividly for the rest of your life… And not just you. Every person around your age goes through the same trauma…

“Now let's move ahead to the time 58 years after the traumatic event… You’re 63–68 years old. Something strange happens… Something happens to make you fear that the event is going to happen again. The same anxiety grips all the other 63–68-year olds across the country. Maybe the anxiety is well-founded, maybe it isn't, but the people in your age group panic, and the panic spreads to younger people who are influenced by your concerns.”

Too far-out, you say? Xenakis offers these examples…

So what was it that happened 58 years ago in 1962 that traumatized the children of that day, the memory still buried deep within their synapses?

And in an environment when the two leading contenders for the White House (along with the media) are trying to outdo each other with being “tough on China”?

While stocks are slumping, gold is making another run toward its highest weekly close in seven years. As we write, the bid is up to $1,736.

We caution that something similar happened two weeks ago today, and it turned out to be a head-fake.

Crude is holding steady as the week winds down at $33.52… and Alan Knuckman sees a return to $40 in the cards.

“Oil is pushing toward the top of its range after a sideways consolidation over the past week,” Alan tells us. “You can see the stability in oil since the May contracts’ infamous run into negative territory. Crude is up an astounding 300% since bottoming out in April! 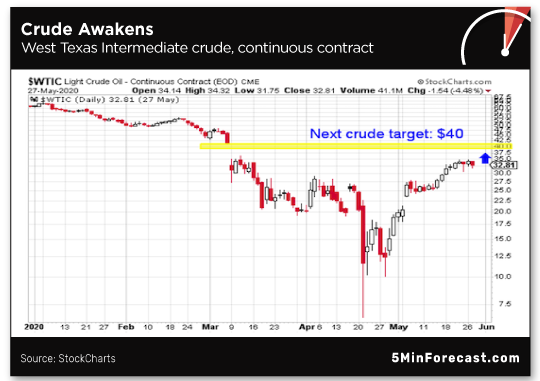 “It’s all about money flow,” he goes on — “and money is flowing back into crude after its capitulation move. $40 is beginning to look like the next target level, which is where the breakdown happened when everything hit the fan in the first place.”

Intriguingly, Alan sees the same chart setup in a bunch of stocks that — at least so far — have been left behind by the snapback in the broad market. (You can take advantage at this link.)

If the idea of all that government “stimulus” is to goose consumer spending, it’s not working.

Or so we’d conclude from the “income and spend” numbers issued today by the Commerce Department.

With that, the personal savings rate — a number that includes both savings and debt paydown — has touched 33%, demolishing all previous records going back to the Leave It to Beaver era… 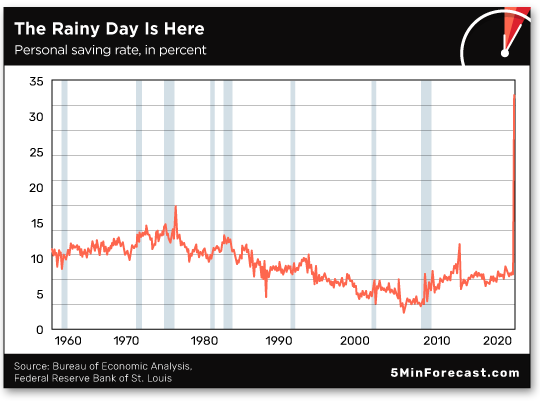 If you’ve been reading closely in recent weeks, you’re not surprised. “Once the government aid is distributed, many recipients will not spend it (as hoped) but will save it,” Jim Rickards said here on May 7. “Even if you are not laid off, you may worry that your job is still in jeopardy. Any income you receive will either go to pay bills or into savings ‘just in case.’”

Also from this morning’s report is “core PCE” — the Federal Reserve’s preferred measure of inflation. It’s down to 1% — juuust a bit shy of the Fed’s 2% target. Negative interest rates, here we come?

➢ Apropos of nothing, RIP Ken Osmond — the guy who played Eddie Haskell on Leave It to Beaver. He died earlier this month at age 76.

We feel as if we should have something profound to say about the Trump-Twitter spat — you know, given everything we’ve said about social media in the last couple of years — but we can’t summon it today.

Sorry, no brilliant take here on Section 230 of the Communications Decency Act of 1996. But we’ll briefly give the floor to our favorite political reporter, the freelancer Michael Tracey… 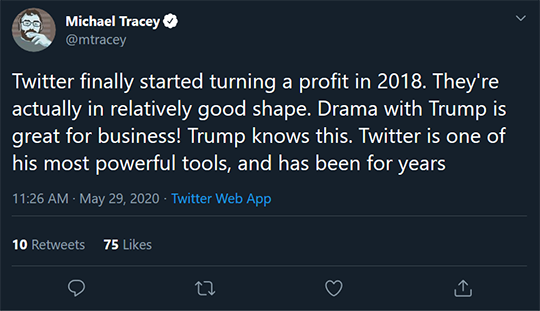 First came the lockdown beer truck in Chicago. Now from Texas we have… 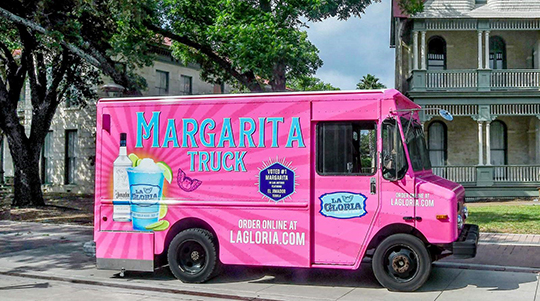 The margaritas at La Gloria in San Antonio are renowned, we’re told. And now they’re available — along with a few menu items — for doorstep delivery.

“The first truck to roll out will only service within a three-mile radius of Crockett Park in downtown San Antonio,” reports the city’s ABC affiliate, “but by June additional trucks will be available around the city.”

Unlike in Chicago, restaurants in Texas can open again. But La Gloria is hip to market forces. “Safety is top of mind for everyone,” says chef Johnny Hernandez, “and many of our customers are simply not ready to dine out; however, we know that doesn’t mean they don’t crave one of our famous margaritas.”

Yes, there are a few catches. Minimum order $40, plus a $5 delivery charge and you must order food with your adult beverage of choice. Oh, and have the ID ready, of course…

“I find this term disingenuous,” a reader writes — objecting to our usage of “crony capitalism.”

“There is nothing capitalist about corruption between a business organization that facilitates a public official to favor it over other businesses.

“This is aristocracy and contains none of the features of capitalism, which rests on innovation to produce ‘products’ in a competitive landscape – quite the inverse of the ‘crony capitalism’ reference.”

The 5: We understand where your beef’s coming from. We really do. But this ship sailed long ago.

Along the same lines, we’re fond of the term “late degenerate capitalism” — coined by the German economist and newsletter maven Kurt Richebächer.

Richebächer died in the summer of 2007, just as the first tremors preceding the earthquakes of 2008 began to be felt. He saw what was coming, because he saw how a capitalist economy had been co-opted by financial markets.

The finance sector is supposed to be the servant of companies that seek to create products and services that allow you and me to improve our standard of living. But nowadays, finance has become the master. Many companies organize their business models around pleasing Wall Street instead of Main Street.

No, if it’s the traditional definition of capitalism you seek to express, best use the term “free market.” Until that inevitably gets corrupted, too. Then we won’t know what to do…

And in just three days.

Alan’s next potential money-doubling trade is due just before the market opens Monday morning.