“One day does not make or break a market,” says Alan Knuckman — our eyes and ears in the Chicago options trading pits, open again this week after a corona-shutdown.

As you likely heard, the Dow industrials shed 1,861 points yesterday. In terms of points, that’s good for No. 4 on the all-time list; indeed, the top seven down days have all come this year.

But in terms of percentages? It doesn’t even make the top 20.

As always, Establishment financial media fell all over themselves trying to come up with “explanations” — because that’s what they do.

They settled on two — a “gloomy Fed” and a “second wave” of the virus. Lame.

It’s true that most of the time official Federal Reserve economic forecasts are over-optimistic and the one issued on Wednesday was uncharacteristically dour.

But no one should have been surprised by the forecast or by anything Fed Chairman Jerome Powell said during his follow-up press conference. This is the first recession since the 1973 “oil shock” that wasn’t brought on directly by the Fed’s own idiot policies. Powell has sounded gloomy for more than three months now, and nothing changed this week.

➢ OK, one thing Powell said Wednesday did take us aback. “Inequality has been something that’s been increasingly with us for four decades and it’s not really related to monetary policy.” Is he just tone-deaf? Is he being purposely obtuse? Or is he really oblivious to how monetary policy has totally enriched the 0.1% at nearly everyone else’s expense? 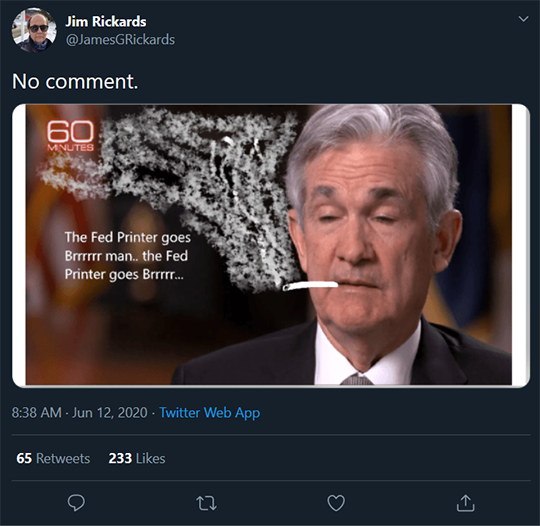 Meanwhile, a second wave? Here too, no one should be surprised. Any hopes that “warmer weather” would kill off the corona-crud were dashed weeks ago by the experience of tropical Brazil.

The sell-off yesterday also brought forth an amusing alternative explanation: All those people with time to spare and money to burn? The ones we spoke of on Wednesday? They’re getting back into sports… 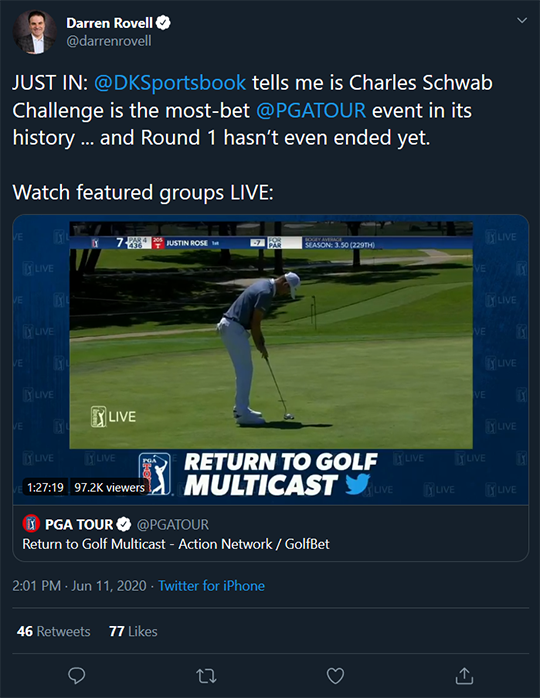 “Is this why the stock market tanked yesterday?” mused Jim Bianco of the institutional-research firm that bears his name. “The new Robinhoodies were distracted with their previous pastime?”

Here at The 5 we proffer a more prosaic explanation, one we’ve trotted out before on similar occasions: The market was just plain due for a pullback. 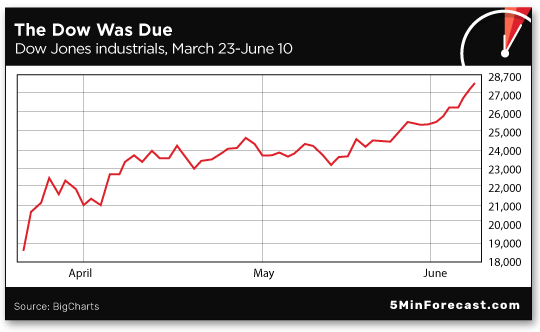 The run-up starting about a month ago was simply too far, too fast. If it weren’t the Fed or the virus, the media would have come up with something else to “explain” yesterday’s dump.

“You can’t have a powerful momentum move without encountering some bumps in the road,” says the aforementioned Alan Knuckman.

“Over the past week, I’ve used the market rally to my advantage by taking profits on my positions that have posted the more extreme upside moves, including big tech plays, semiconductors and even energy stocks.

“I just mentioned in an interview I did yesterday that the market has gotten a little difficult at these levels because the risk-reward is so skewed now compared with just two months ago. You have to be very selective when searching for bullish positions.

“I like the overall market momentum. But I’m not trying to chase the stocks that have already posted a 50% move off their lows. These are the names where you’re likely to see some unwinding and profit-taking as the weak hands are shaken out.”

As noted here on Wednesday, readers of Alan’s Daily Double Club are on a roll — 18 consecutive winning trades, nine of them good for at least 50% gains and the other nine doubling their money. Alan tells you all about how his strategy works and what it can do for you when you click here. Act now: We’re accepting new readers only through midnight tonight.

[Confidential to Platinum Reserve members: Alan just wrapped up a timely market briefing with our executive publisher Addison Wiggin. Of course, you already have access to Daily Double Club as part of your membership, but in this briefing Alan is sharing insights you won’t hear elsewhere — this is a Reserve exclusive. To watch the replay, check your inbox for an email with the subject line “Part 10, Going Live Now” sent at 10:00 a.m. EDT.]

As for today’s action, the major U.S. stock indexes are back on the rally tracks.

The buying today is so fast and furious that Dave Portnoy of Barstool Sports fame, mentioned here on Wednesday, is complaining that E-Trade’s website is running slow. Heh…

Not sharing in the recovery, however, is crude. After getting clobbered yesterday, it’s down another 24 cents as we write, to $36.10.

At $1,736, gold keeps trying to climb higher — but then it keeps getting smacked down. Can’t completely rule out another run at a seven-year high before day’s end, though…

On the road to de-dollarization, China has supplanted the United States as the leading buyer of Venezuela’s oil.

Washington tightened its economic sanctions on Venezuela last August — meaning anyone doing business with Venezuela could come into Washington’s crosshairs because so much international commerce is conducted in dollars.

The conclusion of that analysis: “Crude from Petróleos de Venezuela SA, or PDVSA, kept arriving at Chinese ports with the help of a Switzerland-based unit of Rosneft, Russia’s state-owned oil company, and a roundabout delivery method that made it appear as if the oil’s origin was Malaysia.”

Where there’s a will, there’s a way, evidently. Three of Washington’s bêtes noires — Beijing, Moscow and Caracas — managed to do an end run around the “economic policeman of the planet,” to use the words of France’s finance minister a couple years ago.

The growing use of sanctions is typical of “empire in its late stage.”

So says an acquaintance of Kelley Beaucar Vlahos, executive editor at The American Conservative. She describes this individual as a “sage student of military history.”

“The most recent administrations have racked up the number of sanctions at a dizzying pace,” Vlahos says. She cites figures from Cato Institute scholar Doug Bandow: The number of individuals under one or another form of U.S. economic embargo is now 8,000 — about 3,100 of them added during the Trump administration.

And as we’ve documented here, one-10th of the world’s countries comprising a quarter of the global population are the target of some degree of economic warfare by Washington — either full sanctions or other punitive economic measures.

“All despite a bounty of evidence that they don’t work, and are counterproductive,” Vlahos writes. “They strengthen the hand of the regime we are trying to hurt while condemning ordinary people with no political power to change anything to grinding poverty and a growing animus toward the U.S. (see Iran).”

The endgame is one we’ve described before but can’t repeat often enough — de-dollarization.

More and more people, companies and governments are trying to bypass the dollar’s formidable role in global commerce.

The most plausible scenario for how it ends is one our own Jim Rickards described here in 2018 — the “axis of gold,” he calls it. Once completed, it would encompass “a robust multilateral payments system that is free of hacking, tracking or interdiction by the U.S. and free of U.S. dollars. This gold-based payments system will dilute and ultimately eliminate the impact of U.S. dollar-based sanctions.”

Already Venezuela is trading gold for Iranian-produced gasoline. (Venezuela is swimming in oil, but its refining capacity is a wreck — thanks again to U.S. sanctions.) Now we see the end run around Washington to deliver Venezuelan crude to China, aided by a Russian cutout.

Long term, it’s bad for the dollar and good for gold. Act accordingly.

“Wokes,” reads the subject line of a reader’s email after Tuesday’s 5.

“What/who are they and what is the word, if that is what it is, supposed to mean? Criminals and anarchists?”

The 5: At the risk of oversimplifying, “woke” is shorthand for the mindset of “social justice warriors” who are caught up in “identity politics” driven by ethnicity, gender and so on. They engage in “cancel culture” to enforce their wishes.

By and large they are young, but like-minded university professors among the older generations have surely given the phenomenon a push.

Not nearly enough time to get into the weeds today. One of the definitive books written so far about the movement is Panic Attack: Young Radicals in the Age of Trump, by Robby Soave, who we cited on Tuesday. Really, though, the movement transcends Donald Trump; some marketer probably included Trump’s name in the title to goose sales.

Another is The Coddling of the American Mind: How Good Intentions and Bad Ideas Are Setting up a Generation for Failure. It’s a book-length treatment of an article first published in The Atlantic in 2015 by First Amendment authority Greg Lukianoff and social psychologist Jonathan Haidt.

As irony would have it, the editor of The Atlantic who signed off on that article was James Bennet — the guy who was forced out of The New York Times six days ago for running afoul of the SJWs’ sensibilities…

“Instead of term limits,” a reader writes after we described how we’ve soured on them, “what do you think of a tax on any political contribution over $200 at 25%, and 50% if you can't vote for the person?

“Hey, they tax my Social Security.”

The 5: We’re none too keen on any sort of campaign-finance limits — too many messy First Amendment issues, from where we sit.

Far better to limit the power of government in the first place so that no amount of campaign contribution could actually make a difference in what a lawmaker does once in office.

Yeah, we can dream, right?

The way this service works is super simple: Every day the market’s open, you get a trade recommendation with the potential to double your money. In recent days, readers have been able to log 18 consecutive winners — half of which grew 100%.

If you’d like to put odds like that on your side, you’ll want to check out this link before it goes dead just hours from now.