The Great Gold Shortage of 2020 is moving into a new phase. An exciting phase. One in which you’ll want to seize the moment.

In early April, roughly two weeks into the U.S. corona lockdowns, we told you how the global gold trade was going haywire. Mines were shutting down. Far fewer airplanes were available to transport metal. Gold demand in China and India collapsed. Talk about scrambled supply chains.

Strictly speaking, it wasn’t a gold “shortage” as much as gold being in the wrong place at the wrong time. The result was a huge disconnect — a spot gold price of $1,620, but good luck if you wanted real metal in your hand. For that, you were looking at $1,800 — if you could find anyone willing to sell.

Now, with the benefit of a couple months’ hindsight, we have a better idea what was going on.

“Gold has reached America from all over the world,” says Allan Finn. Finn works for Malca-Amit, one of the few specialty companies in the business of securely moving gold from one part of the globe to another. “The flows into New York,” he tells The Wall Street Journal, “are unprecedented.”

But we’re not talking safe-deposit boxes or home safes you buy at Costco. We’re talking official depositories approved by the Comex, all within perhaps three hours’ drive of Lower Manhattan. These vaults now house 29.7 million troy ounces — the highest in records going back to 2013. Almost three-quarters of that total showed up in the last three months. 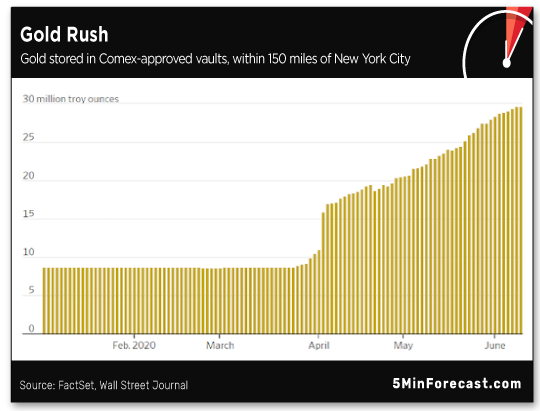 “We’re talking about 22 million ounces of recently acquired gold in total,” writes Byron King of our sister e-letter Whiskey & Gunpowder. Byron’s been keeping tabs on precious metals and other natural resources for our firm since 2007.

“Or to look at it another way, consider that a new, world-class gold mine might deliver 200,000 ounces per year. For example, that’s about the annual output of Victoria Gold’s new Eagle mine in the Yukon. So 22 million ounces of gold is equal to about 110 Eagle Mines.”

But why? The Journal article comes up short. Lots of facts and figures and arcane minutiae about the global gold trade… but zero context.

“Why,” Byron asks, “are all these wealthy moneybags and institutions buying vast amounts of gold — entire, Nevada-scale levels of output — and storing it?”

The good thing about what we do around here is we can speak truths that Establishment outfits like the Journal can’t or won’t. Byron, you have the floor…

“The U.S. government is effectively insolvent, in terms of cash flow in and expenditures out.

“At the federal level, nothing works anymore absent ‘money creation’ by the Fed and public debt incurred by the Treasury.”

Yup. As we noted last week, the Federal Reserve has conjured more money into existence over the last 12 months than Uncle Sam has collected in tax revenue.

Meanwhile, the national debt topped $26 trillion last week — up from $23.4 trillion only three months ago, when the president declared Covid a national emergency.

“And face it, that $26 trillion of debt is utterly unpayable — not by any semblance of productive output that generates cash,” says Byron.

“Even paying interest will be problematic, which is why the Fed has just promised super-low interest rates for the next two years.”

“In the end, the moneybags of the world fully intend to come out on the other side of this storm with their balance sheets intact.”

Doesn’t it make sense to follow their cue? Before everyone catches on to the scale of the problem?

No time like the present to get started… and Hard Assets Alliance makes it as easy as possible, with a website interface that makes buying physical gold, silver, platinum and palladium as easy as buying a stock through an online brokerage.

The premiums are among the lowest in the business… and thanks to its robust wholesaler network, it was able to meet demand even during the worst of the supply crunch in early April, while many other dealers were sold out. Reliable.

Follow this link and see what Hard Assets Alliance can do for you. Full disclosure: Our firm invested last year in Hard Assets Alliance, so you should assume we’ll collect a small cut once you fund your account. But we wouldn’t have entered that venture if we didn’t already like the way they do good by their customers.

“It wasn’t a matter of IF but WHEN some unwinding would take place after the epic three-month rocket rally,” says our Alan Knuckman — back today with more perspective about last Thursday’s big sell-off.

“The tech takeoff has rocketed 50% off the lows, posting a new high Wednesday before the profit-taking pullback. You have to put this move in perspective! We just enjoyed a nearly straight-up rally for three months against the backdrop of never-ending bad news.

“Looking beyond the tech boom, our broad market barometer — the S&P 500 — erased all of its losses for 2020 just last Tuesday before the downturn. A higher weekly peak is always a positive sign that we can’t ignore.”

➢ Turns out Alan was a bit too eager to get from his lakehouse back to Chicago. Yes, the CBOE reopened last week, but only to current floor traders. “I might not make it back into the building until August at the earliest.” That’s OK, his mobile phone has a lengthy address book of current traders who are back in the pits and cluing him in.

“Before the Thursday swoon,” adds chart hound Greg Guenthner, “the S&P 500 had rallied an improbable 45% off its March lows. I know it feels like a lifetime — but we registered these lows only 12 weeks ago. Throw out all the financial news headlines. The market was just too frothy. Something had to give.”

Before the open, it appeared the Dow was set to crater 600 points — thanks to a surge in new Covid cases both in China and the U.S. Sun Belt.

We’re getting our first read on the economy’s performance so far in June. The Fed’s Empire State index of New York state manufacturing — well, it didn’t shrink from the previous month’s horribly depressed levels. The number rings in at minus 0.2 — a hair below the zero line between expansion and contraction. Under the circumstances, that counts as a victory.

This won’t end well: The country’s biggest pension fund is looking to amp up its returns by using leverage.

CalPERS covers 1.9 million current and retired California state employees. Its assets total only 71% of what it needs to pay future benefits. And with a return to near-zero interest rates, the probability of achieving its target of 7% annual returns is less than 40%.

From the Financial Times: “In a presentation to the CalPERS board, Ben Meng, chief investment officer, said the giant fund would take on additional leverage via borrowings and financial instruments such as equity futures. Leverage could be as high as 20% of the value of the fund, or nearly $80 billion based on current assets.”

Leverage. We’re sure it’ll work out just splendidly. As mentioned here in April, Meng is the guy who bailed last year on a small position in hedge funds designed to pay off big in the event of a crash like the one in March.

California taxpayers, prepare to shell out more to shore up CalPERS…

Saw this one coming: A trade group warns up to 85% of nonchain restaurants might go out of business for good by year-end.

So says a report by the Independent Restaurant Coalition. Independents make up 70% of all restaurants. Overall they’re much more reliant on dine-in revenue. And while many states are “reopening” now, most of them are mandating operation at only 50% capacity. Time’s running out.

"What I'm afraid of is the people that are the least likely to survive are going to be these small, single-location, immigrant-run, women-run, people-of-color-run operations,” says Dan Wu, owner of Atomic Ramen in Lexington, Kentucky. “That we're the ones that don't have the infrastructure like the chain restaurants to survive this."

In dense urban areas where rents are high, the problem is even more acute. "I still have most of the same bills that I had before I closed,” Amanda Cohen of New York’s Dirt Candy restaurant tells Business Insider. “And I don't think I will have enough customers to keep my business going."

The trade group is asking for a $120 billion bailout. We hate all bailouts, but we can think of a lot less deserving recipients, too…

“The real problem with increasing the size of Congress will be to find places for them to sit down in both the Chamber and offices. That could lead to having to build a new Capitol building, maybe in Omaha , Nebraska. No swamps there!”

The 5: No need. As we said at the start of this discussion, a more “representative” House of Representatives with no more than 50,000 residents per district doesn’t have to meet in the same place at the same time.

The House already set a precedent with remote voting a few weeks ago, thanks to the pandemic. So now there’s no excuse not to expand the membership from the present 435 to at least 6,500, as the Founders’ math would dictate.

They can still all congregate in D.C. once a year — hang out, maybe meet at Capital One Arena, where the NBA and NHL franchises play, take tours of the Capitol Building for old times’ sake. What’s not to like?

P.S. Now he tells us: Dr. Anthony Fauci said the government’s warnings against face masks three months ago — remember that? — were prompted by the fact masks “were in very short supply.”

Gee, what were we saying in early April?