We know space is expansive, but…

It’s gotta be getting a little congested above Earth’s atmosphere, right? (Mind you, I’m no astrophysicist, rocket scientist or madcap billionaire genius.)

The latest in space-race news comes out of China, where a rocket launched scant hours ago. Its payload? The 35th and final satellite of the country’s BeiDou-3 navigation system that will eliminate China’s reliance on U.S. government-owned GPS… 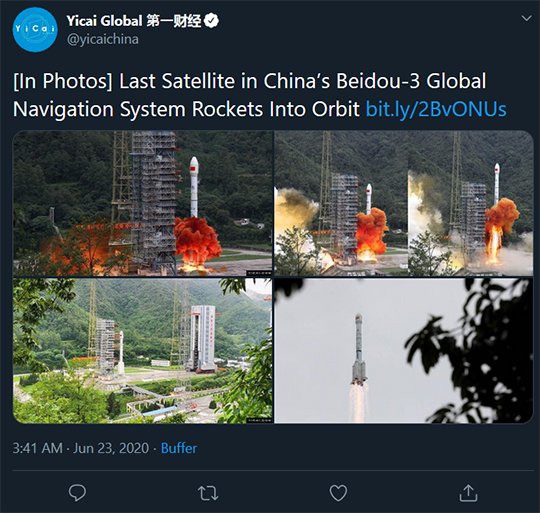 The BBC reports: “[The $10-billion network] comes as tensions between Beijing and Washington are increasing over the coronavirus, trade and Hong Kong.”

“Future plans promise to support a more accessible and integrated system scheduled to come online by 2035 with BDS at its core.”

By 2035? Well, sometimes the schedule is more compressed…

When a bro on Twitter asked if Musk was serious, Musk responded in typical chest-forward fashion…

According to a 2017 article at Vox: “Musk got a chance to see his bet through. Tesla won competitive bidding for the entire energy-storage portion of the project in July. The contract was signed on Sept. 29, kicking off the 100 days (though at that point, Tesla was half-finished already).

Now Musk’s darling SpaceX (heh… not his girlfriend’s name) is under the gun with an even tighter schedule — this time imposed by the U.S. government…

In March this year, “the FCC announced it would pay… any company that could bring high-speed internet to rural areas with a latency of under 100 milliseconds,” says our tech aficionado Ray Blanco.

And by June 9, The National Law Review notes: “The FCC adopted final procedures for conducting the Rural Digital Opportunity Fund Phase I auction (‘Auction 904’), which will make available up to $16 billion in federal funds to support the deployment of high-speed broadband and voice services in rural America – the single largest step thus far toward bridging the digital divide.”

Ray continues: “While this $16 billion payout may seem enticing, there’s one small catch,” he says, “this goal must be completed within the next month.” Or July 15, to be precise.

And perhaps to egg on Musk…

Ray says: “The FCC said it has ‘serious doubts’ that Musk’s company SpaceX can reach this goal on such a short timeline via its Starlink satellite system.”

The 5’s been following the story of Starlink closely. Most recently, we covered the SpaceX launch of a Falcon 9 rocket that carried 60 Starlink satellites to add to a constellation of 482 broadband-network, low-Earth-orbiting satellites.

And Ray reports: “Starlink just launched its third set of satellites in two weeks — putting another 58 into space.

“Starlink’s original plan was to open up a network of satellite internet for private testing by August,” says Ray. “Regardless of whether or not SpaceX claims the FCC’s $16 billion reward, Starlink could have a test underway sooner.”

Ray continues: “The FCC understands how much this technology will change the world but also understands current telecom signal distribution has many limitations.”

Indeed. Just days after the FCC went public with its “$16 billion bounty” there was a widespread signal outage across the U.S. on Monday, June 15.

“While the exact cause is unknown,” says Ray, “the rumor is T-Mobile messed up its integration of Sprint’s system into theirs. Others speculate it was an infrastructure problem with a cell tower.”

[Sidenote: Still others — like my Gen Z daughter — speculate the government powered down Wi-Fi amid BLM protests. Stranger things have happened… Dave recently reminded us of India’s intentional seven-months-long internet blackout in the Kashmir region of the world’s largest “democracy.” Perhaps the powers that be are experimenting in the good ol’ US of A?]

“Regardless of the root cause,” says Ray, “FCC Chairman Ajit Pai called the outage ‘unacceptable’… The FCC wants outages like these eliminated.”

Ray says: “It only makes sense that lighting a fire under Musk could help speed up the process… You can bet the FCC’s doubts and this short timeline have grabbed the attention of Musk and Starlink.”

If Australia’s any proof, Musk is one to take up the gauntlet…

And “[Starlink] is well on its way to start private testing with a limited number of people,” he continues. “[The company] is already accepting sign-ups on their website open to the public.

“Either way, this push to hit the July 15 deadline will result in a faster launch for Starlink’s network,” Ray notes.

Meaning? “Global coverage of high-speed internet could soon change forever for billions of people around the world,” he concludes.

[Ed. note: Right now you have the chance to get in on the technology behind Starlink before it happens…

Imagine investing in the technology ahead of Microsoft’s computer? Or before the iPhone’s reveal?

That’s the potential you have right now if you get in on this new global internet before the mainstream.

Click here to see all the details for yourself.]

(To further clarify Peter Navarro is NOT the Jane’s Addiction guitarist – that’s Dave Navarro. Pete's the president's director of trade and industrial policy. A lot less sexy… heh. Glad we cleared that up.)

For the two big economic numbers of the day, we first take a look at the flash Composite Purchasing Managers' Index (PMI), that gathers information from the IHS Markit research firm. Numbers below 50 suggest economic growth; below 50, contraction.

The consensus for June is 49.6 for manufacturing and 46.7 for services. May’s numbers? Manufacturing came in at 39.8 with services at 36.9. And — good news, y’all — April was apparently peak dreadful for the U.S. economy, according to the folks at Econoday. Sigh of relief?

For the second important number of the day, the Commerce Department reports new home sales hiked 16.6% to a seasonally adjusted annual rate of 676,000 units last month. Economists had anticipated an increase of new home sales at just 2.9% in May.

Wonder if you can barter for a new home? Perhaps in Northern California…

The barter economy is making a comeback in Napa Valley. An article at Al-Jazeera notes a resurgence of “the informal trade economy in an area synonymous with enviable good living.”

The article explains the new reality: “Exchanging the citrus found in nearly every front yard, the honey produced by the beehives many have in their back gardens and the wine — bottles… that… will never reach the store shelves and so delicious your tongue will slap your brain.”

While the practice wasn’t unheard of in the Valley before the pandemic, it’s become a way of life since.

Caterer Linda Pippin — a resident of St. Helena for 24 years — says she traded baked goods for items like “kumquats, Meyer lemons and high-quality vanilla” in the past. But now she bakes her famous salted butter chocolate chunk shortbread three times per week for bartering.

Brett King, CEO of startup Moven, says: "I expect to see this trading emerge more and more for access to food and other basic services. With COVID-19, people are getting creative.

“The traditional system is broken, to some extent,” King continues. “The stock market is having its biggest recovery ever, but the economy is clearly in distress with the unemployment numbers and what you look at to maintain subsistence."

(Hmm… something about a disconnect between the real economy and the stock market? A theme we’ve been following at The 5.)

And we can’t neglect to point out the primary reason people “get creative” when it comes to personal finance… because they’re cash-strapped. But that’s clearly not the case for some Main Street — and many Wall Street — investors…

“Today, investors are holding a record amount of cash on the sidelines,” says our income specialist Zach Scheidt.

“The amount of money currently being held in money market accounts,” he says, “just hit a record level of $4.6 trillion. Well above the highest level ever seen… 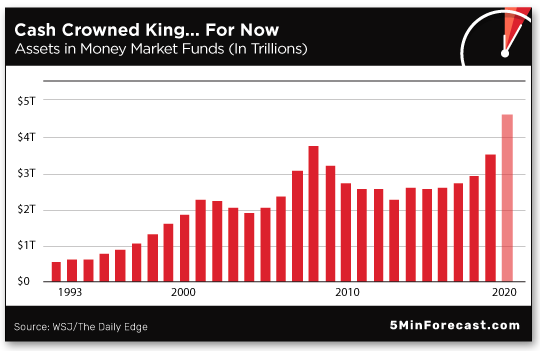 “For example, when you keep extra cash in your brokerage account (waiting for a good opportunity to invest it in stocks), most brokers automatically move this cash into a money market account.”

“[When] investors are holding a lot of cash,” says Zach, “we can expect them to buy.

“That is a big part of why stocks are trading higher — and will continue to trade higher — despite all of the concerning news in our world today.”

Zach’s takeaway? “With so much money parked on the sidelines just waiting to be invested, we could see a huge surge from here.”

“Perhaps your analyst Greg Guenthner has it backward,” a reader writes apropos of The 5 Monday, “Trump's picks have no influence on the prices of stocks.

“The president just has a knack for glorifying bad companies while knocking good ones.

“Ah, the perfect indicator at last!

The 5: Now that you mention it, the best folks could reconstruct the numbers some years back, Trump might as well have put Daddy’s money in an S&P 500 index fund. Woulda been a whole lot easier than all the wheeling, dealing, lawsuits and bankruptcies.

According to a 2015 article at Fortune: “Donald Trump’s net worth has grown about 300% to an estimated $4 billion since 1987, according to a report by The Associated Press.”

“But the real estate mogul would have made even more money… if Trump had invested in an index fund in 1988, his net worth would be as much as $13 billion.”

Sure… but then he wouldn’t have gotten a shot at reality-TV stardom on The Apprentice.

P.S. While SpaceX makes strides toward the FCC’s $16 billion prize…

The investment opportunity for retail investors is limited — SpaceX is a privately held company… and if Elon Musk has anything to say about it, SpaceX will stay that way.

Good thing, then, for the rest of us, Ray Blanco is blazing a trail to life-changing gains with these bleeding-edge stocks.