Three months ago, Bloomberg News went out of its way to dis gold bugs with all the usual stereotypes — describing our own Jim Rickards’ residence as a “mountain compound.”

But this morning, the ‘tude is gone. “Gold’s allure is only getting stronger as 2020 unfolds,” says a Bloomberg dispatch. “Spot prices reached $1,800 an ounce and year-to-date inflows into bullion-backed exchange-traded funds topped the record full-year total set in 2009.”

The ETF inflows are staggering when viewed on a chart. Bloomberg’s data shows holdings in gold ETFs reaching 3,234.6 tons yesterday. 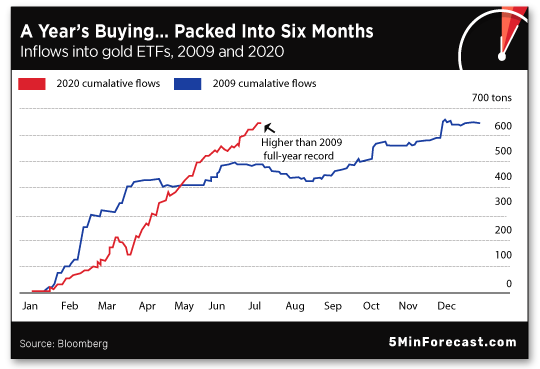 It’s totally counterintuitive, especially if you’re a retiree: Gold throws off no income stream, but in a world where central bankers keep their thumb on interest rates, you need it.

Especially if the inflation monster starts roaring again — which is exactly what our income specialist Zach Scheidt expects, sooner or later.

“It’s a risk that few people are talking about right now,” he says, “but one that could have a devastating effect on how much you can spend during retirement.

“Imagine setting up a retirement plan that can give you $150,000 of annual income… only to find out a few years in that your $150,000 will barely cover your most basic needs like food and shelter.”

Consider the two line items that take the biggest bite out of a typical retiree’s budget.

Meanwhile, “as the government tries to stimulate the economy in the wake of the coronavirus crisis, we’re already seeing the effects of inflation in certain areas,” Zach goes on.

A small sample plucked from today’s business headlines: The trendy Shake Shack chain — with outlets in 29 states — has been raising prices amid the pandemic.

In-store traffic is down 60% year over year. To make up for lost sales, the firm has resorted to “an increase in price mix of 11.1%,” according to the trade website Fast Casual.

It’s a gamble, to be sure, but it will likely pay off. There’s just enough free money from Uncle Sugar burning a hole in people’s pockets that Shake Shack can pull off price increases without driving people away. And thousands of other companies will be making the same wager.

“As the government continues to plow more dollars into the U.S. economy, gold is once again providing retirees a measure of inflation protection,” Zach says.

“Not only that, but gold is helping people actually grow their wealth throughout this uncertain time period.

“As we move into the second half of the year and the government’s payments start to take effect, I expect gold to surge above $2,000 per ounce and actually hit $3,000 before the end of the year.”

Yes, you could buy a gold ETF — obviously a lot of people are, based on that chart we showed you — but shop around. As we’ve chronicled here for a long time, some have more gold backing than others.

Much better is holding real metal — either in your own possession or in a vault where there’s a paper trail saying the stuff actually belongs to you. “Allocated storage,” it’s called — as opposed to unallocated, where your gold is merely lumped in with everyone else’s.

Our friends at Hard Assets Alliance offer you the choice of delivery or allocated storage in New York, Salt Lake City, Zurich, London or Singapore. [Note: If you want gold in an IRA, you’re limited to the two domestic locations. Sorry, IRS rules.]

There’s still time to capture the run to $2,000 or $3,000 gold. But at $1,800 today, time is running short. Follow this link to learn what Hard Assets Alliance can do for you. Full disclosure: We bought a piece of the firm last year, so we’ll collect a small cut once you fund your account. But we made that investment in part because we’re so impressed by what Hard Assets Alliance has done for people like you since its launch in 2012.

Meanwhile, the Nasdaq keeps marching higher, while the S&P 500 and the Dow are treading water. Once again, the biggest of the bigs — Apple and Microsoft — are leading the way.

“Last week’s breakout boom in the S&P 500 was exactly we were looking for,” says our floor-trading veteran Alan Knuckman. “Stocks were strong right out of the gate this week, confirming the breakout move. The wedge pattern with lower highs and higher lows for a month in the broad market barometer above 3,100 now targets 3,250 — the width of the sideways slowdown.”

Crude is barely reacting to the weekly inventory numbers from the Energy Department. A barrel of West Texas Intermediate is down 14 cents to $40.48.

Gold can also jump in reaction to geopolitical catalysts — which brings us to some concerning under-the-radar developments in the Western Pacific.

“The U.S. military has been mobilizing all of its capabilities for a massive show of force in waters abutting China,” writes the veteran geopolitical observer Michael Klare in The Nation.

“Every Pacific-based U.S. submarine is now deployed in the area; two nuclear-powered carriers and their escort ships are conducting naval maneuvers there; the Air Force has sent B-1 bombers overhead; and the Army is practicing to seize Chinese-claimed islands.”

True, the U.S. Navy has been active in the South China Sea for years. “Until now,” Klare explains, “these operations have been limited to probes and taunts, intended to demonstrate Washington’s rejection of China’s claims to the islands and its emplacement of military facilities upon them.”

But these latest maneuvers appear to have another aim — “an intent to reverse China’s occupation of the islands by military force,” Klare writes.

Even the Pentagon’s rhetoric has shifted. Here’s Nimitz commander Rear Adm. James Kirk: “Our operations demonstrate the resilience and readiness of our naval force and are a powerful message of our commitment to regional security and stability as we protect critically important rights, freedoms and lawful uses of the sea.”

Klare says the maneuvers and the language are like a red cape before an angry bull — the bull being Chinese leadership. “This represents both a crude dismissal of China’s ability to defend itself and a harsh repudiation of its claim to having achieved ‘great power’ status — something that can only produce immense anger and dismay.”

Beijing will inevitably respond one way or another, lest it lose face with the Chinese public — which, for all we know, is the desired outcome for U.S. military planners.

“With the [Chinese] Navy also holding maneuvers in the South China Sea at this time,” Klare warns, “it is not hard to imagine how close encounters between U.S. and Chinese warships could result in an accidental or ambiguous event, precipitating an armed incident and full-scale escalation.”

Obviously, we hope that’s not the case. But given how Washington and Beijing are already locked in a cold war… and how Donald Trump and Joe Biden are trying to out-hawk each other on China… well, you heard it here first. 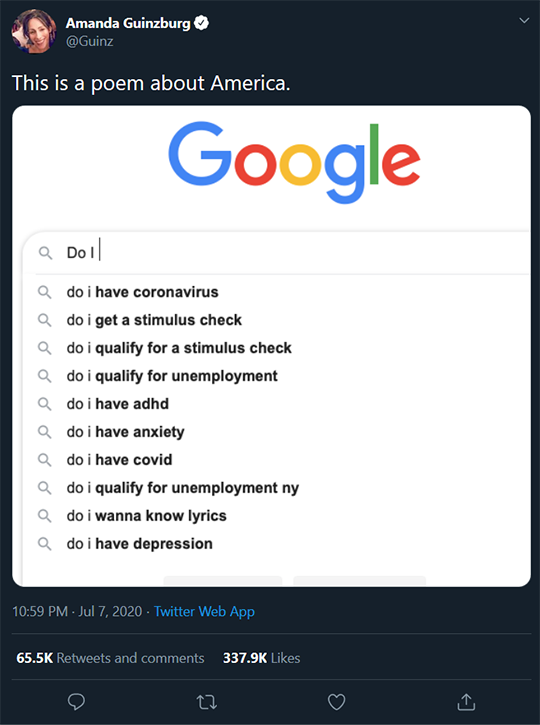 “I love The 5, and I agree that 'should' is a very dangerous word in the investment game.

“I also agree with you about the P/E ratios, margin debt and the rest.

“But the high levels of money market cash you cite ought to be held up with the other indicators of stock market danger — not as a reason stocks could rise further. All that cash available is not earning its keep.

“The only thing I see keeping the market up is 'QE.’

“I can't say we are at the top. How long are we going to be printing money out of nothing? And how long will that work? Until the yuan is the world currency? That will be ugly.”

The 5: Yes, it’s destined to end in tears. But by the same token, good on you for not being willing to call a stock market top.

We hate to cite Keynes’ old saw about how the market can remain irrational longer than you can remain solvent… but it’s true.

If you’ve already accumulated your fortune, then you can comfortably sit out stocks at this time and hold a ginormous gold and cash position. Most of our readers aren’t that fortunate — that’s why they subscribe to newsletters! — and so we soldier on with their well-being in mind.

Meanwhile, it will be a long time before the yuan becomes the globe’s reserve currency — if ever. It’s still not liquid enough and China’s capital markets still aren’t open enough.

More likely — indeed inevitable — is the constant drip-drip of de-dollarization, a theme we’ve been onto for six years now. The rest of the world is looking for ways to get out from under the dollar’s influence, seeking workarounds to transact in means other than greenbacks.

And that quest will only accelerate as Washington resorts more and more to sanctions and other forms of economic punishment against individuals, companies and governments that don’t bow to its dictates.

The next snowflake will fall in a few more days when Donald Trump signs (or Congress overrides Trump’s veto of) a bill imposing sanctions against specific Chinese government officials, on account of Beijing’s Hong Kong policy. Stay tuned…

P.S. To our surprise and delight, we got a metric ton of feedback after we posed the question yesterday about whether businesses are resisting or complying with the various shutdown orders, old and new, across these United States.

In fact, there’s so much of it that we’ll devote the bulk of tomorrow’s episode of The 5 to your fellow readers’ ground truth. Catch you then…

P.P.S. Congratulations to readers of The Profit Wire — the trading service where I team up with Alan Knuckman to help our subscribers profit from media misinformation.

By following Alan’s instructions, they bagged a 50% gain in just over 24 hours on one of the major social media names. (No, not that one.)

Textbook trade, really. Maybe we’ll get into the details of how it worked in the coming days. But in the meantime, you can learn more about our one-of-a-kind system right here.