If you want to protect your wealth from pandemic pandemonium, the best course of action? Search out anti-bubbles…

Accordingly, Diego Parrilla — at the helm of the $450 million Quadriga Igneo Fund — wrote a book on the subject: The Anti-Bubbles: Opportunities Heading Into Lehman Squared and Gold’s Perfect Storm. (And we submit the question that’s emerged from backseat road-trippers for at least 70 years: Are we there yet?)

To give an idea which anti-bubble assets Mr. Parrilla favors, his Quadriga Igneo Fund is invested in about 50% gold and other precious metals with another 25% in U.S. Treasuries. The remaining 25% is invested in options strategies that benefit from market volatility.

Apparently a lover of the beautiful game, Parrilla offers this European football metaphor for his investment strategy… 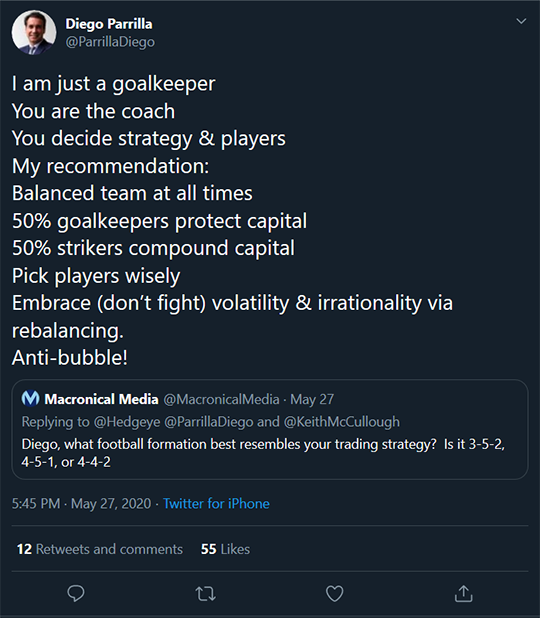 An article at Bloomberg emphasizes: “Parrilla’s fund is predisposed toward hedging the next big crash while generating capital over time.”

And amid the current economic crisis, the Quadriga Igneo Fund has been positively incandescent with 47% returns so far this year. To further explore why Parrilla’s fund has produced such strong returns, he provides some historical context…

“What we’ve seen over the last decade is the transformation from risk-free interest to interest-free risk,” Parrilla says, “and what this has created is a global series of parallel synchronous bubbles.”

Going forward? “What you’re going to see in the next decade is this desperate effort, which is already very obvious, where banks and government[s] just print money and borrow, and bail everyone out, whatever it takes, just to prevent the entire system from collapsing.”

Jibing with Monday’s episode of The 5 per inflation, “One of the key bubbles is fiat currency,” Parrilla says, “and one clear anti-bubble in this system is gold.”

With the menace of inflation looming: “Gold has captivated some of the world’s most prominent investors this year,” notes Bloomberg, “who argue that the rapid expansion of central bank balance sheets will reduce fiat currency values and drive demand for hard assets.”

And Mr. Parrilla has a chest-forward gold prediction…

To wit, our macroeconomics expert Jim Rickards reports: “One of the savviest gold traders in the world sees gold hitting $3,000–5,000 per ounce perhaps as early as 2023.”

Jim continues: “There's more to the gold bull case than just low interest rates. Demand is up from central banks seeking to diversify away from U.S. dollars. Supply is limited by the inability of the mining industry to locate significant new sources of gold ore.”

On top of which: “Existing holders of gold are unwilling to sell in many cases because they can see the economic stress caused by the pandemic and are expecting a wave of corporate bankruptcies in the coming months.

“Strong demand, flat supply, low interest rates and fear of credit losses are a perfect recipe for higher gold prices,” Jim concludes. “The path to $3,000 per Parrilla's intermediate-term forecast” — here Jim ups the ante — “and to $15,000… per my longer-term forecast is clear.”

[Ed. note: The good news? With gold priced at $1,843.50 today, it's not too late for investors to enter the market and enjoy the ride up… And if you’ve been waiting on the sidelines, we have an elegant solution.

Our friends at Hard Assets Alliance make it accessible for investors like you to take delivery of bullion or opt for storage in New York, Salt Lake City, Zurich, London or Singapore vaults. And it’s fully “allocated,” to use an industry term — which means your holdings aren’t pooled along with everyone else’s. They’re yours and yours alone. To learn how to open your FREE SmartMetals account, click here.

As always, full disclosure: Our firm owns a piece of Hard Assets Alliance, so you should assume we’ll collect a small cut once you fund your account. But we wouldn’t have invested in Hard Assets Alliance unless we were already enthusiastic about what this service can do for investors like you.]

In a report to investors, bank analysts said they anticipate the price of gold returning to its all-time high — $1,921.17 per ounce — within six–nine months… 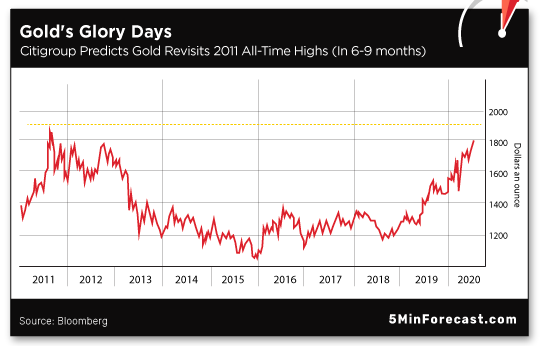 And Citigroup’s report posits there’s a 30% chance that gold will reach $2,000 per ounce in the coming three–five months.

Don’t forget the other precious metal: “Citi sees silver rising to $25 in the next six–12 months,” Bloomberg says, “with a potential for $30 based on the bank’s bull case, additionally supported by a recovery in global economic activity.”

As for the rest of the market, our analyst Greg Guenthner says: “The Nasdaq awakened from its slumber thanks to some huge moves from its biggest components yesterday.

“Tech stocks have officially stormed back to kick off the trading week, with the Nasdaq pushing higher by 2.5% yesterday,” Greg says. “This move appears to be triggering a broad-market breakout today….”

The 5’s been following a trend our technology sleuth Ray Blanco calls “Apple-Fi”… and his hypothesis just got even more compelling.

As a refresher, Apple-Fi is Ray’s prediction that the tech giant’s all-in on something that will bypass big telecoms: creating its own satellite internet for Apple’s throng of loyal customers.

“Of course Apple likes selling iPhones,” says Ray, “but what if they could offer service as well?” Apple already has an edge on the U.S. competition with 42% of American smartphone users owning an iPhone. “And in 2019, Apple sold over 200 million iPhones worldwide,” Ray reports.

“Enabling CBRS in the iPhone 11 is a huge step,” he says. “[Apple’s] next step is to either develop their own satellite internet or pair up with a company… to provide global high-speed satellite internet.” Something Ray believes will “flip the entire industry on its head.”

Ray’s takeaway? “Apple is going to need other companies to help them get this project up and running. And I’ve targeted seven companies right now I think have a good shot at profiting off Apple-Fi.”

Former investment banker Nomi Prins says: “I went to a local coffee shop the other day and there was a sign that asked for customers to use a debit/credit card to pay for their purchase or have exact change.”

While The 5 typically chronicles the war on cash, something quite the opposite is happening in life-after-coronavirus America. “There is a coin shortage going on in the country today,” says Nomi. Something an eagle-eyed Twitter user also recorded… 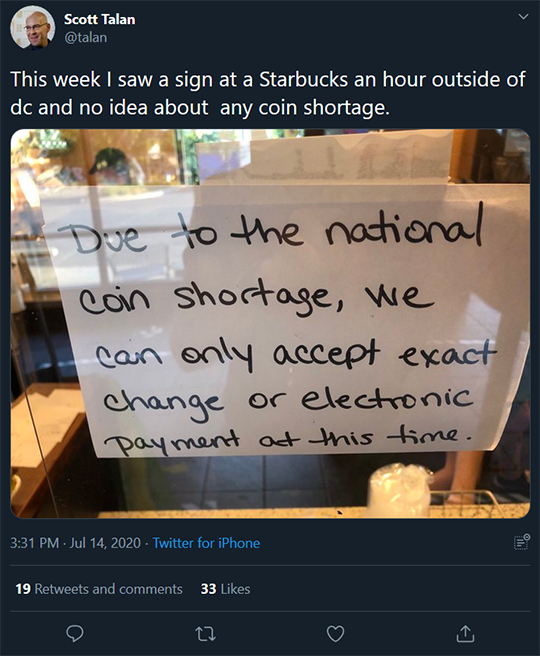 Nomi says: “This coin circulation issue is serious stuff!” In response, the Federal Reserve has created the U.S. Coin Task Force. Its mission? To "mitigate the effects of low coin inventories caused by the COVID-19 pandemic."

Nomi names those affected most by coin shortages: “Businesses that deal largely in coins such as car washes and laundromats” as well as “those on the lower end of the financial spectrum [who] rely on cash for their purchases and transactions.”

To deal with the coin shortage, “businesses are talking of rounding up prices to exact dollar amounts to keep from giving change,” Nomi says. After the corona-crash, we guess every penny counts…

To comply with Gov. Andrew Cuomo’s new edict that bars must serve food with alcohol, New York bar owners are getting inventive.

The latest edict the governor handed down Thursday is supposedly a measure to tamp down on what he calls “block party bars.” Cuomo reasons mandating the purchase of food will keep butts in seats… instead of the hoi polloi intermingling.

USA Today reports: “The decision has drawn a sharp and at times snarky response from bar owners, many of whom say they have diligently followed the state's COVID-19 restrictions and fear their livelihood is at stake if they can't sell booze.”

Back to inventive bars: The Irondequoit Beer Co. — just outside Rochester — is offering the “Cuomo Cheese Plate” for $1. The bar’s Facebook page offers a simple flow chart for customers about ever-changing rules… 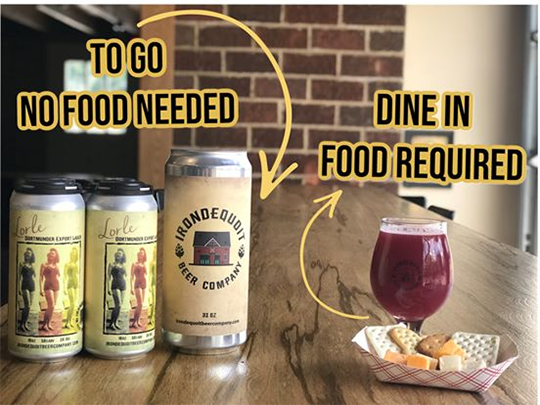 Not to be outdone (or transparent), the New York State Liquor Authority offered guidance for restaurants and bars. “Each bar, restaurant or brewery has to serve food that is ‘consistent with the food availability requirement’ of their liquor license,” says the paper’s New York State Team.

“That means a tavern, for example, has to serve sandwiches, soups or similar items, at a minimum. A brewery or winery, on the other hand, can get away with serving cheese, fruits, breads, crackers and the like.”

Clear as a stout tall boy, no?

But hey, seeing as it’s lunchtime in Baltimore at the time of writing, a $1 order of “Cuomo Chips” would really hit the spot…

“Arrgh!” a reader exclaims in response to the uptick of piracy in Asia.

“Who knew ‘piracy scholar’ was a vocation?” he says. “Whattaworld!”

The 5: Aye, it doesn’t sound like a legiti-matey field of study to us. (Yeah, we went there.)

“Interview with Jim Rickards,” is the subject line of a reader’s email.

He says: “I clicked on the transcript and it wouldn't open; now I feel like I missed out.”

The 5: We’d hate for you to miss it, so here’s that link once again.

Full disclosure: We bought a piece of the firm last year, so we’ll collect a small cut once you fund your account. But we made that investment in part because we’re so impressed by what Hard Assets Alliance has done for people like you since its launch in 2012.