So you’re hurting financially because of the pandemic? Too bad — depending on where you live, you’re staring down a tax increase.

We return today to one of this e-letter’s longest-running themes — the “new taxes and weird fees” local governments impose during tough economic times.

To say nothing of municipal services you take for granted that aren’t there anymore. In 2011, as the economy was still clambering out of the 2007–09 recession, we chronicled the bankruptcy of Harrisburg — Pennsylvania’s capital city — where the trash hadn’t been picked up for months.

We knew trouble was coming again: At the end of April this year, we took note of a proposal to jack up property taxes in Nashville by 34%.

This week, the mainstream finally woke up to the trend — with a Pew Charitable Trusts story that starts in Nashville before hopscotching the nation.

That property tax increase is now a done deal. “We’re broke,” says Councilman Bob Mendes — who favored an increase even before the pandemic hit.

The city, he says, is “dead last of the 25 biggest cities in terms of rainy-day funds.” Alas, the article begs the question of how that could happen when the city’s population, and thus its tax base, grew by 11.4% over the last decade.

Way back in 2011 we anticipated how a funding crisis in the federal government would cascade down to the state and local levels. Well, we’re here now.

More from the story: “Moody’s Analytics chief economist Mark Zandi told reporters in a recent conference call that if state and local governments don’t get federal support soon, there will be ‘substantial budget cutting and [governmental] job loss’.”

Hmmm… If Congress comes through with aid in a new relief bill — and that’s a huge if — it will only be with more borrowed/printed money. Already the fiscal 2020 federal budget deficit is projected to run $3.8 trillion — smashing the previous record of $1.4 trillion in 2009.

And so the tax increases — some now in effect, others still at the proposal stage — are coming fast and furious…

Of course, the last of those proposals can only accelerate the current exodus from the Empire State.

David Friedfel of an outfit called the Citizens Budget Commission points out the top 1% of taxpayers generate 40% of New York income tax revenue. “If 1% of that 1% leave, $200 million of revenue is gone,” he tells Pew. “At a certain point, more people will leave than the revenue will generate.”

And don’t think red states are exempt. The Washington Post cited the case of Texas earlier this month.

Tax revenue there collapsed by $650 million in June. The Lone Star State has a healthy rainy-day fund totaling $11 billion… but with the reopening there now being thrown in reverse, it’s going to be depleted quickly.

Tax increases aren’t on the table yet, but the Republican governor is asking state agencies to think about what to cut if their budgets are trimmed by 5%.

Bottom line: Wherever you are, be ready for higher taxes, poorer services – or more likely both.

At last check, gold’s spot price is $1,902.80. You can argue about what the “real” record high is: Is it the spot price or the front-month futures contract? Is it the intraday high, or the close? We like the round number of $1,900, reached on Tuesday, Sept. 6, 2011. If today’s number holds, one thing’s for sure: It will be a record weekly close.

The Chinese stock market reacted poorly to the latest developments. The Shanghai Composite ended the day down 3.9%.

Here at home, the major indexes are adding to yesterday’s losses. The Dow is down about a half percent as we write, while the Nasdaq has tumbled nearly 2%. Clearly, hot money is again fleeing from the highflying tech names. Meanwhile, the S&P 500 is holding the line for the moment on the 3,200 level.

It’s not just gold that’s making the U.S. dollar look bad these days; the greenback is also suffering relative to the globe’s other major currencies.

At 94.4 this morning, the U.S. dollar index is quickly approaching two-year lows… 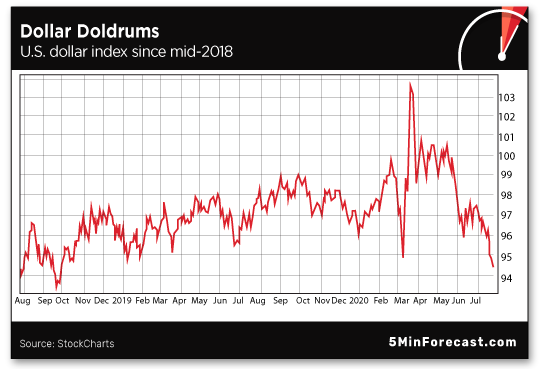 The dollar index is dominated by the euro… and the euro is rallying this week because European leaders came to terms on a $2 trillion pandemic spending package. Yale economist Stephen Roach says it’s another step toward closer European integration — “a common currency, one central bank and a credible commitment to a unified fiscal policy.”

No surprise if you’re one of our longtime readers: Jim Rickards has said for years the euro is mostly a political project, not an economic one. Yet again, mainstream predictions of an imminent eurozone crackup have come up short.

“Europe’s fiscal breakthrough drives an important wedge between the overvalued U.S. dollar and the undervalued euro,” Roach continues. He foresees another 35% drop in the dollar index to the all-time lows of 2011 — which, as we noted above, happens to be when gold last set an all-time record priced in dollars.

The U.S. economy ceased contracting this month — if the “flash PMI” number is to be believed.

The Markit research firm is out with its monthly survey of activity at about 1,000 companies. Numbers above 50 indicate growth; below 50, contraction. The overall June number is 50 on the nose. Manufacturing is a little higher, services a little lower.

But with reopenings going into reverse, July might be as good as it gets for a while — especially for services.

Elsewhere, we see new home sales are back to their pre-pandemic pace — jumping 13.8% from May to June. With rock-bottom mortgage rates and shrinking inventory, the median new home price surged $19,000 to $329,200.

“The gains for housing,” says a summary from Econoday, “raise the question whether those most affected by the virus and related shutdowns – lower-wage workers — are being left out of the recovery.”

Gee, ya think? Reminds us of what old-timers said about the Great Depression: “It wasn’t so bad as long as you had a job.”

Welp, so much for Cuomo Chips.

On Tuesday, Emily told you how New York state bars had come up with an ingenious workaround for Gov. Andrew Cuomo’s byzantine social-distancing guidelines — including a requirement to serve food with their booze.

But no sooner did we go to virtual press that afternoon than the State Liquor Authority revised the rules, “which requires they sell more substantial food with alcoholic drinks,” per the New York Post.

The new guidance says chips, nuts and candy aren’t good enough — but “sandwiches, soups or other foods, whether fresh, processed, precooked or frozen” are. Also, “foods which are similar in quality and substance to sandwiches and soups; for example, salads, wings or hot dogs.”

[Good Lord, people collect a paycheck to come up with this stuff. And they tell us with a straight face they’re relying on “the science.”]

“They’re making it up on a whim,” complains a bartender in Brooklyn who would identify himself only as Joe, “and pretty much everything they’re doing is targeting bars.”

To the mailbag: “Dave, I agree with you on most of your commentary…

[We know the “but” is inevitably around the corner.]

“… but you seem to be dismissive of or at least downplay the threat (in various forms) that China – actually, the Chinese Communist Party — poses to American and other Western interests. Please elaborate on that when you get a chance in a forthcoming edition.

“The central committee is made up of Mao successors — in business suits. If you don't know much about Maoism, it would be a good exercise starting in the ’40s through the Cultural Revolution into the modern era. Ominous and scary.”

The 5: So we’re back to “reds under the bed” now? Seriously?

Well, we saw it coming a year ago — with the purges of ethnic Chinese cancer doctors (including U.S. citizens) and warnings to federal workers and contractors about how their fellow soccer dads might be Chinese spies. 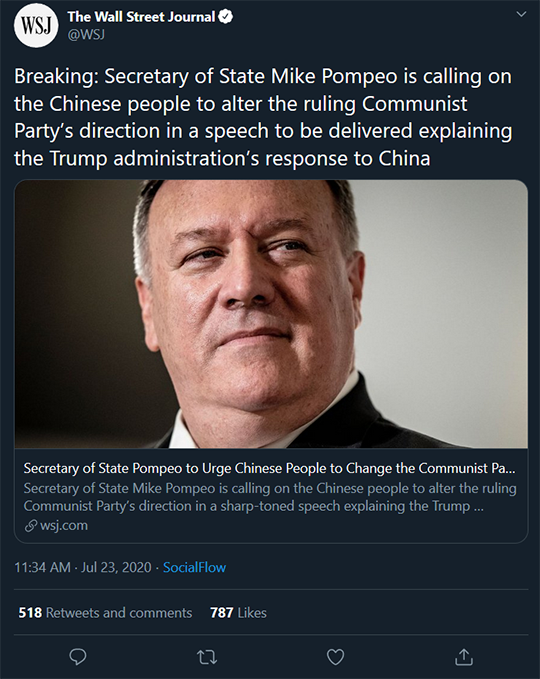 Oy. There is no surer way to undermine the organic opposition to an authoritarian regime… than for American officials to give it their public blessing.

From this moment forward, the CCP can dismiss any domestic opposition as tools and running dogs of Washington, D.C.

It’s a proven playbook for authoritarian leaders. The Castro brothers in Cuba milked it for decades. Ditto for the ayatollahs after George W. Bush encouraged Iranians to rise up in 2006. Who knows how the 2009 Green Revolution might have turned out if Dubya hadn’t opened his big mouth three years earlier?

Actually, the Chinese regime already put the playbook into use a year ago in Hong Kong. Here’s a tweet we passed along at the time from a hack writing for a CCP newspaper… 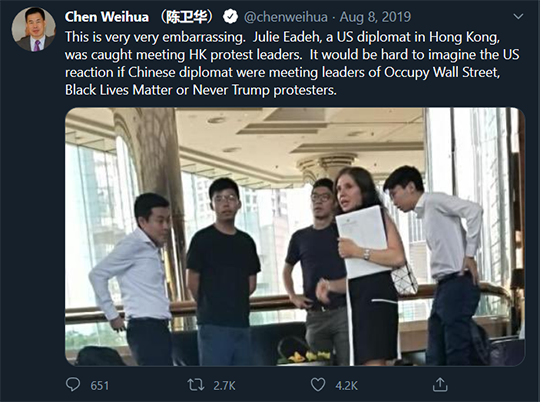 Precisely. But because American leaders are so caught up in their “indispensable nation” hubris, they’re incapable of seeing events through their adversaries’ eyes.

Ditto for the U.S. “freedom of navigation” patrols in the South China Sea. “Imagine the response if Beijing sent its navy up the East Coast, told the U.S. how to treat Cuba and constantly talked of the possibility of war,” writes the Cato Institute’s Doug Bandow.

Bandow then invokes George Washington’s warning from his farewell address: “America’s consistently hostile, aggressive policy is the result of ‘projects of pride, ambition and other sinister and pernicious motives.’”

Washington would surely be looking down on present-day America and wondering why our leaders, Republican and Democrat alike, are so keen to stir up trouble overseas when there’s a world of problems to contend with here at home right now.

Or is the object to create a distraction from those problems?

P.S. Congratulations to readers of Technology Profits Confidential — Ray Blanco’s entry-level tech-and-biotech newsletter. This morning Ray urged them to take 182% gains on one of the companies making progress toward a COVID vaccine.

Don’t feel bad if you missed out. Ray sees a lucrative opportunity on the high-tech front that cranks up starting next Tuesday. See for yourself, right here.