The Fed vs. the People

How the world really works: “The Federal Reserve has bought corporate bonds issued by companies that have laid off more than a million workers and doled out dividends to shareholders,” reports Politico — citing an analysis from a congressional subcommittee.

Sorta puts the lie to Fed chairman Jerome Powell’s claim to Congress in June that “the intended beneficiaries of all our programs are workers.”

Since the Fed swooped into the corporate bond market six months ago, it’s purchased the debt of about 800 companies. Of that total…

“So the primary beneficiaries of this program seemed to be corporate executives and investors, not the workers that Powell intended,” sums up our investment banking veteran Nomi Prins — who brought the story to our attention.

And even that isn’t working as well as it used to. “The corporate bond market is once again coming under duress,” says Graham Summers in our sister e-letter Money & Crisis.

Looking at his charts of the major corporate bond ETFs, he concludes, “Junk bonds have broken below support, and investment-grade bonds are about to do the same.” 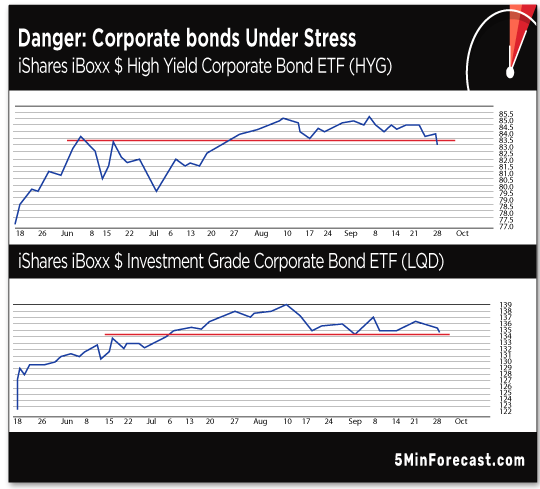 It’s not just the chart action, either. Investors pulled $4.86 billion from junk bond funds in the week ended Wednesday, according to figures from EPFR Global. That’s the highest weekly total since mid-March — just before the Fed committed to buying corporate bonds for the first time.

Why are investors cutting back their exposure to risky debt? “Concerns over the persistent economic effects of the virus, alongside mounting fears of a contentious U.S. presidential election,” says the Financial Times.

Whatever the reason, Mr. Summers says the takeaway is clear: “The Fed has spent trillions of dollars propping up the financial system. Why would it suddenly decide to let them implode?

“So we can expect the Fed to announce a new monetary policy, or at the very least stage a verbal intervention shortly.”

Until then, the U.S. stock market is on its way to notching a fourth-straight weekly loss.

At last check, the Dow and the S&P 500 are nearly flat relative to yesterday’s close. But the Nasdaq is up nearly three-quarters of percent, well past 10,700 again.

The big economic number of the day is orders for durable goods — a category covering everything from dishwashers to drill presses. Orders rose 0.4% in August, way off the “expert consensus” calling for a 1.5% increase. Orders are still down 5.4% compared with February.

But that’s just the headline number. If you back out aircraft and military hardware, the “core capital goods” number jumped 1.8% in August… and orders are now 1.9% higher than they were pre-lockdown.

Pension fund managers are keen to make a date with TINA.

As we explained last week, TINA is a trendy acronym for “there is no alternative” — meaning no alternative to stocks if you want to generate investment income. Not with the Fed committed to rock-bottom interest rates for three more years.

Cue the front page of today’s Wall Street Journal: “Pension funds and endowments have been shifting away from the U.S. stock market for years. Some are now reconsidering that decision.”

Obviously that’s hurt performance. Most government pension funds count on a 7% annual return to meet obligations to future retirees. But in the year ended June 30, the median annual return was only 3.2%. Ouch.

“It’s reasonable to expect a bit of shift toward equities given how unattractive core fixed income is,” says Mika Malone, a consultant for large pension funds and endowments. “We have been discussing low rates in every client meeting.”

Two takeaways: First, an influx of new money from pension funds is sure to give a lift to quality dividend-paying stocks. And second, woefully underfunded pensions need something, anything, to forestall the prospect of pleading for a taxpayer bailout.

Private equity in your 401(k)? It’s coming sooner than you might think.

As you likely know, investing in a privately held company is usually limited to “accredited investors” — meaning you need at least $1 million to invest or two years of income over $200,000.

But… “A new proposal from the Department of Labor is set to open the door this year,” says our Zach Scheidt, “allowing regular investors access to the private-equity market.”

It’s early days, though. “The guidelines are still brand-new and not many 401(k) companies have started offering these new options for investors.” Too soon for Zach to make a recommendation to his readers.

But… you can get exposure to lucrative private-equity investments right now with one of his longtime favorite stocks, Blackstone Group (BX). “Blackstone will naturally benefit as 401(k) retirement accounts begin to invest in private-equity funds because BX is the premier private-equity manager in the United States.

“Over the past year, BX has paid investors $1.86 per share in dividends — which adds up to a 3.6% dividend yield from where the stock is trading today. Over the next year, I expect those dividends to be even higher as new 401(k) money is invested in the funds BX manages.”

Leave it to the drug trade to innovate during challenging times.

The European Union’s drug agency is out with a report that says organized crime groups have proven remarkably adaptable amid the pandemic and lockdowns.

“With street dealing affected by restrictions on movement, consumers and dealers turned to the use of online darknet markets, social media platforms and parcel and home delivery services,”

And while air travel has been severely curtailed, cutting off one avenue for smuggling, “trafficking by maritime shipping continued at pre-pandemic levels”.

We’re not at all surprised. In 2016, the Rand Corp. interviewed 135 drug felons in Europe. Its conclusions: “Interviewees' arrangements for securing supplies of drugs provide support to the notion that drug markets are resilient and flexible.” 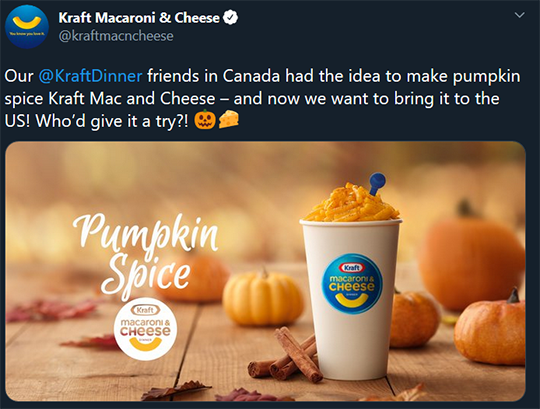 For now, this abomination is limited to Canada… and only as a stunt in which a mere 1,000 people will get the product after signing up for a wait list. But as you can see, Kraft Heinz might be giving thought to U.S. distribution.

“The package comes with dry macaroni noodles and a pumpkin spice-flavored powder to add to the classic cheese powder and cinnamon to sprinkle on top,” says CNN. “Each box recipient will also receive a coffee mug.”

Hmmm… Kraft Heinz was on the skids until the pandemic hit. The Brazilian investors who’ve called the shots for the last five years relied too much on cost cutting and not enough on keeping up with the times. (Think like a drug dealer!) Oh, and the firm had to restate two years’ worth of numbers in 2019. To say nothing of the decision to bump off Mr. Peanut during Super Bowl week this year.

But with a 5.55% yield at today’s share price? KHC shares are a helluva lot more tempting than pumpkin spice mac-cheese, that’s for sure…

“Oh, Dave,” summons one of our semi-regulars in mailbag-land, “To quote your last reader after explaining how costs for vaccines have come down: ‘Stay healthy and keep your fingers crossed.’

“I don't think I'm the only one envisioning an I Am Legend post-vaccine apocalyptic world. Rushing a vaccine through to meet a political or any other kind of agenda to me is where scary stuff starts.

“Praise the lord and pass the ammunition. As always, enjoy The 5.”

“I noticed,” a reader writes, “that you never mentioned the fact that the current coronavirus vaccine is not at all like previous flu or other vaccines that relied on old technology to generate dead or attenuated viral particles to activate a person's immune system.

“The COVID-19 vaccine is a genetic vaccine that involves not antigens but RNA or DNA genetic material to cause a person's cells to make the antigens themselves when they read the genetic blueprint in the vaccine.

“I have a Ph.D. in microbiology and have studied this for many years after receiving my degree. I know this topic is somewhat complex but that doesn't mean you shouldn't inform your readers of important differences.

“Also, the Israelis through Gilead Sciences and the Galilee Institute of sciences had already started on a genetic vaccine for another RNA respiratory virus similar to COVID-19 and only had to tweak their RNA sequence a little to come up with a working vaccine by the end of April. These are all important facts your readers should know.

“Dr. Fauci and the NIH and CDC could have also been working earlier on genetic vaccine technology but failed to do this due to bureaucratic inaction and laziness. These genetic vaccines take only a fraction of the time to develop, start clinical trials for and the rest of the FDA approval process.

“The failure of the government lies in not getting a faster and earlier start in developing at least a SARS-1 genetic vaccine and then SARS-CoV-2 vaccine when the RNA sequence became available.

“You're criticizing an incompetent government for failing in the wrong areas!”

The 5: Thanks for the input. There’s ample incompetence to go around.

We’re still flabbergasted that no one on either side of the political divide sought to hold the Centers for Disease Control and Prevention accountable for its epic testing snafus.

Wrote Shikha Dalmia at Reason last April: “If the United States had done what South Korea, Taiwan and Germany did and allowed private and state labs to get these tests ready for mass production, we would have been able to conduct countrywide screening almost immediately.

“Instead the CDC decided to reinvent the wheel and develop its own test. It ordered private labs to desist and told them to wait for its test — and when the agency finally rolled the test out, it didn't work. By the end of February, only 4,000 tests had been conducted and the country had no idea how fast the virus was spreading.”

Oh, and don’t forget that many of the tests they did manage to spin up were contaminated.

But CDC Director Robert Redfield still has his job, and to the best of our knowledge, no one lower on the food chain has been cashiered. Government in action…

There’s been no shortage of volatility this month… which translates to ample opportunities to at least double your money.