“The playbook for making sports teams more valuable is, in theory, quite straightforward,” says a Bloomberg article at The Washington Post.

The secret sauce? Solid performance, on and off the field; lucrative broadcasting deals; updated stadiums and sought-after merchandise. (But every homer knows ownership can tick all the boxes… and your team can still break your heart.)

“Fenway Sports Group LLC may have found a solution,” the article continues. “The owner of Major League Baseball’s Boston Red Sox and the English Premier League’s Liverpool Football Club is in talks to be acquired by the blank-check firm RedBall Acquisition Corp.”

If you recall The 5’s treatise two weeks ago, special purpose acquisition companies typically have two years from the date of IPO to make a deal or the blank-check company must return cash to investors.

But RedBall wasted no time, and listen, the company’s name can’t be a coincidence…

“The deal could see Fenway receiving close to $1.5 billion in return for a stake of 20–25%,” the article says. “In one fell swoop [Henry] would likely make back all the capital he spent acquiring the Red Sox and Liverpool, in return for selling a minority stake.”

Speaking of, RedBall has a stellar list of directors, including Oakland Athletics’ general manager Billy Beane, who was memorialized in the movie Moneyball. (Alas, Beane tendered his resignation to Oakland two days ago, presumably because of a conflict of interest. Moneyball, indeed.)

“SPACs right now are hot,” Ray says, “and everyone wants to get into the action somehow.”

Ray was early to the SPAC party. A year ago he got his readers into the company that soon became the vehicle by which Richard Branson’s Virgin Galactic (SPCE) went public. A cool 250% gain in four months. But if you missed out, Ray has a treat for you today…

“You may have done your own research or had your broker help you choose the SPAC or SPACs right for you,” he says. But “if you’ve found it difficult to choose the right SPACs for your portfolio, I have a solution…

“Unlike a normal SPAC, this one wildly differs from the rest,” Ray says. “Defiance NextGen SPAC IPO ETF (SPAK) is exactly what it says — the first ETF for SPACs.”

Shorthand for exchange-traded funds? “An ETF is a bundle of investments all packaged into one easily purchasable ticker,” Ray says. “Think of it as a portfolio within your portfolio managed by an investment firm.

“In the case of SPAK, Defiance ETFs brought together 36 different companies that are either IPO companies derived from SPACs or the regular stock of newly listed SPAC companies.” 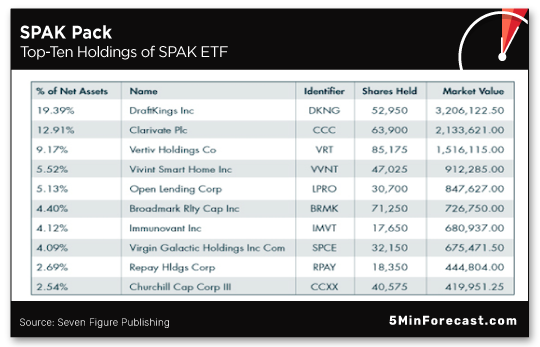 “You may notice some familiar names on there like DraftKings, Virgin Galactic or even Clarivate,” Ray notes. “Companies like these make up 80% of SPAK’s holdings.” With some lesser-known names making up the difference.

Ray notes: “Positions are rebalanced every quarter to give you the best shot at making it big with SPACs and SPAC-derived companies.

“As with any ETF, there is an expense ratio for investing in SPAK,” Ray says.

“Defiance ETFs also have a history… of creating ETFs with good track records,” he says.

“Of the first three they’ve released thus far, all are yielding profits, even with the downturn of the pandemic.

“They continue following the hottest trends on the market with SPAK.”

Ray concludes: “If you want to take a passive, easy way to get into the SPAC game, then consider adding SPAK to your portfolio.”

The Department of Labor reports a troubling trend: Weekly initial unemployment claims increased 53,000 to 898,000 for the week ending Oct. 10.

(Which certainly doesn’t jibe with the NFIB’s rah-rah small-business optimism reported Tuesday… nor with some of the manufacturing numbers today. Read on for that head-scratcher.)

“Investors in Canadian gold mining companies are being rewarded with higher dividends as gold prices settle near $1,900 per ounce,” says The Canadian Press.

More specifically, “Kirkland Lake Gold Ltd. is increasing its quarterly dividend by 50% to $18.75 a share in the fourth quarter after doubling it to $12.50 in the first quarter this year.” Which only seems fair after Kirkland reports zero debt… and a cash position that grew 58% in the third quarter.

Also, Yamana Gold announced a 50 cent per share dividend increase to $2.63 — certainly not as hefty as Kirkland’s, but still…

Last, “in September, Kinross Gold Corp. reinstated the dividend it cancelled seven years ago in view of its growing gold production and higher gold prices.”

Even with gold’s recent pullback, RBC analysts remain bullish, anticipating gold at “$2,012 per ounce in the first quarter of 2021.” The report says: “Our main takeaway from the dollar-driven pullback in gold prices is that it opens up room for gold to once again reach new highs.”

Namely, the Philly Fed manufacturing index soared to 32.3 in October, up from a reading of just 15 in September. “Economists had expected a reading of 13.5,” MarketWatch notes. “This is the highest reading since the pandemic.”

And according to the Philly Fed: “The median capacity utilization rate reported among [surveyed] firms was 72.5%.” (For some perspective, that’s down from 82.5% last year.)

Sort of a downer? The Empire state survey of manufacturing in New York state, wherein any number below zero indicates contraction. In October, manufacturing optimism dropped eight points to 32.8.

“Overall, after a slow restart in manufacturing following the shutdowns for the novel coronavirus, the sector is growing moderately and, in most sectors, is likely approaching or exceeding pre-pandemic levels,” says head researcher T.J. Connelly at Contingent Macro.

“The models… globalists are using to exploit climate change [and] upend capitalism,” says George Gilder, “bear as many fatal flaws as the models predicting the millions of American dead due to SARS-CoV-2.” Which is a thread The 5’s been pulling for at least five months now… 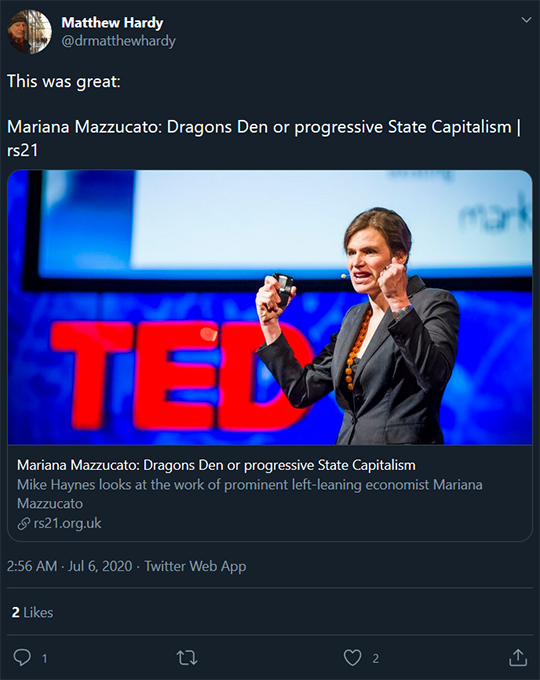 Professor Mazzucato says: “In the near future, the world may need to resort to lockdowns again — this time to tackle a climate emergency.”

She elaborates: Under “climate emergency” lockdowns, “governments would limit private-vehicle use, ban consumption of red meat and impose extreme energy-saving measures, while fossil-fuel companies would have to stop drilling.”

“Moreover,” she adds, “climate change will exacerbate the social and economic problems highlighted by the pandemic,” she says.

“To avoid such a scenario, we must overhaul our economic structures and do capitalism differently,” Mazzucato concludes.

“On one hand [Mazzucato] decries the ineptitude of governments,” George notes, “but these same governments will somehow be able to do capitalism better?” No wonder, then, The Times of London calls Professor Mazzucato “the world’s scariest economist.”

George continues: “With her work focused on ‘the battle against climate warming’ and ‘building resilient health systems,’ there is indeed much to fear from her brand of economics.

“In this new covidious world,” George says, “Mariana Mazzucato and others of her ilk… ivory tower academics who have never run a business” want “to redefine the very terms of capitalism.

“Bill Gates, of course, is a fan,” George concludes. Nice one…

[Nothing to see here… just another global powerbroker using the pandemic to his advantage: “In the person of Bill Gates,” George says, “we have someone with no medical credentials calling the shots in global health.”

In terms of playing doctor on TV, Gates recently doubled down on the pandemic, telling NBC News only a “second generation” vaccine will signal us to emerge from our pandemic bunkers.

Not to be outdone by Thai Airways or Singapore Airlines, Emirates Airline is doing its best to survive the pandemic. This time, off the runway…

“After months of being grounded and then gradually taking to the skies with modified service levels, Emirates is now reintroducing some of the popular upscale features on its A380s,” says an article at Simple Flying.

“The airline is bringing back first-class showers and the business-class bar.”

Heh… in that order?

“While Emirates is planning on reopening the Onboard Lounge, the service will be at a modified level,” the article says. “Rather than returning as a social gathering area, the bar will be a means of ordering a drink easily, and the number of passengers entering will be strictly limited.”

In the meantime, passengers can once again luxuriate in a spa-like shower… 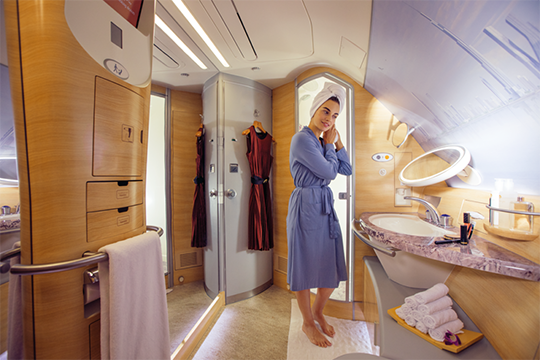 This ain’t your average airline lavatory…

Starting today, according to some press releases, “first-class passengers will be able to take advantage of the two shower spas onboard each A380.”

But while it might be blue skies for passengers, Emirates’ received a $2 billion government bailout in August… only to issue $1.4 billion in refunds.

That said, perhaps Emirates’ execs could use a stiff drink from the lounge… and a good cry in the shower.

P.S. A note just in from Jim Rickards…

And to date, the CIA has given clearance to just a handful of people in the entire world, and you’ll understand why once you click here and see what Jim shares on camera.

It’s something he thinks every American deserves to see… information that might change the lives of millions.