It’s the morning after… 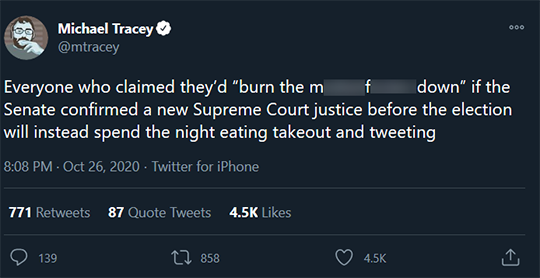 Heh… It’s almost enough to make us question our forecast of widespread civil disorder post-election, a forecast we based on the deep state’s own post-election preps.

Or will the civil disorder of future weeks have a different catalyst? 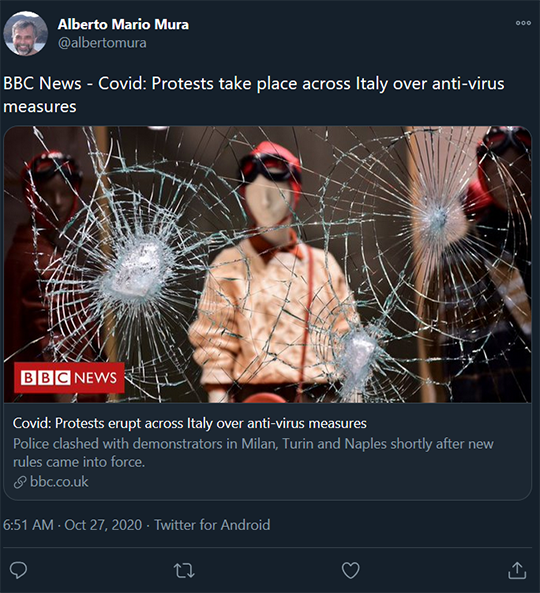 Effective last night, Italy’s gyms and movie theaters have been shut down and its bars and restaurants are under orders to close each evening at 6:00 p.m. And many local jurisdictions have imposed nighttime curfews.

“The days of clapping for medical staff and of rainbow banners reading ‘everything will be alright’ seem a distant memory,” says Mark Lowen, the BBC’s man in Rome. “The virus may be back — but the near-total support for the anti-COVID fight that Italians showed in the first wave is breaking…

“Some on the streets are peaceful: an agonized call for help by restaurateurs or gym owners. But a mix of far-right and far-left agitators, organized crime groups and bored football hooligans have sensed an opening, looting shops and clashing with police. The interior minister warns of ‘an autumn of social tension’…

“The mood of a nation scared into compliance in March is beginning to turn.”

Note well: In terms of reported infections, “Italy has consistently been three–six weeks ahead of the U.S.,” tweets Jim Bianco of Bianco Research. “Is this a window to our post-election future?”

Back in these United States, the market action is mixed after yesterday’s big sell-off, supposedly triggered by worries about “record daily coronavirus cases.”

Using the S&P as a yardstick, the market is down a little less than 4% in two weeks. Is it really a resurgence of the corona-crud… or is it this? 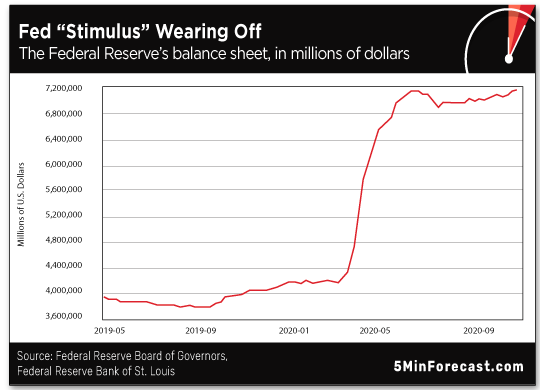 The Federal Reserve started mainlining money to Wall Street in mid-March. The Fed’s balance sheet went vertical. Then it topped out just over $7 trillion in early June. The stock market’s rush continued for three more months, but it’s been wearing off since Labor Day.

Time for another round? The Fed issues its next “policy statement” a week from Thursday — two days after Election Day…

Ironically, if the stock market is supposed to react to economic activity and not the Fed’s juice (yeah, we know, get real)… the big economic number of the day should be cause for a solid rally.

The Census Bureau says orders for durable goods — anything designed to last for three years or longer — grew 1.9% in September, way more than expected. The overall number is now just 3.7% shy of the pre-lockdown number in February.

And if you back out the volatile aircraft and military categories from the number, “core capital goods” smashed expectations with a 1.0% rise last month. The pre-COVID comparisons are even better, with orders now up 3.4% since February.

As it happens, a record number of retail investors are expecting a crash soon — which is nearly slam-dunk evidence a crash is not in the cards.

The Nobel laureate economist Robert Shiller and his colleagues at Yale have been surveying investors for 20 years — asking about their expectations for a 1929- or 1987-level crash in the next six months.

From there, the Shiller team plots out the answers on a “U.S. Crash Confidence Index.” The August reading was a record high, 87% of respondents saying there was a better-than-10% chance of such a crash. September was still extremely high at 85%.

“This is great news,” writes Mark Hulbert at MarketWatch. “Investor sentiment is a contrarian indicator. So it would be more worrying if investors thought there was a low probability of a crash.”

The only other time crash expectations were this high — and again, these surveys go back 20 years now — is March 2009. Which marked the bottom of the market after the Panic of ‘08.

“Masses often get it wrong,” sums up our floor-trading veteran Alan Knuckman — who brought the Hulbert article to our attention.

For sure: As we’ve said before, the time to really worry about a crash is when no one thinks a crash is possible. Party like it’s 1999 and all that…

There is one pre-election catalyst that could set off a stock rally before week’s end.

“Will tech earnings save us this week? That’s the key,” observes Greg Guenthner of our trading desk. “If the big tech companies can impress, we might get some stability despite all the anxiety.”

Microsoft reports after the closing bell today. The other Big 5 companies in the S&P — Apple, Amazon, Facebook and Google parent Alphabet — all report after the bell Thursday.

The mainstream is catching on to our ongoing warnings about “new taxes and weird fees” — which is what happen when city and state budgets are strapped.

“Eerie Calm of Municipal Bonds Belies U.S. Cities’ Tax Plight,” reads the headline of a column by Financial Times columnist Gillian Tett — who is as plugged in to America’s power elite as anyone, judging by the company she keeps.

“[W]hile the muni bond market might seem peaceful,” she writes, “the real-world situation in cities and municipalities is alarming. Not only could the current fiscal squeeze eventually raise default rates, deficits are undermining the civic services needed to support recovery.”

Tett interviewed Miami mayor Francis Suarez, whose city went into lockdown with a $20 million surplus… and began the new fiscal year this month $35 million in the hole. She also interviewed Pittsburgh mayor Bill Peduto, staring down a $75 million deficit… and Seattle Mayor Jenny Durkan: “Our revenues have been decimated. Without help we are facing depressionary conditions.”

“Investors and federal policymakers should be paying attention to these concerns,” writes Tett — “not least because Seattle, Pittsburgh and Miami are probably among the better resourced and better run American cities.”

Yep. The Bay Area economics blogger Robert Wenzel contrasts those cities with chronically mismanaged San Francisco, where… and with apologies to Dave Barry, we swear we’re not making this up…

“Mayor London Breed has launched a program to pay artists to paint the boarded-up windows of stores that haven't re-started and are creating no revenue of any kind for the city, as if there was actually money to start any new programs.”

Betcha can already tell where this is going: Cities will threaten “catastrophic” cuts to schools and police and fire protection, because that’s what scares taxpayers into going along with tax increases. And even that won’t be enough.

Years ago, we figured the time would come when Congress would act to bail out states and cities — on a scale that would put the post-2008 bailouts to shame. (Most of the $787 billion Obama “stimulus” was spent on helping states and cities continue to meet payroll.)

But the lesson of 2020, with the Federal Reserve already buying municipal debt, is that the Fed can make an end-run around the messy legislative process.

Yes, it will swell the Fed’s balance sheet even more than it’s swollen already. (See above.) And yes, that’ll be terrible for the value of the dollar.

Which is why our Jim Rickards continues thumping the table for a 10% gold allocation in your portfolio. (We’ll hear more from Jim about gold tomorrow.) 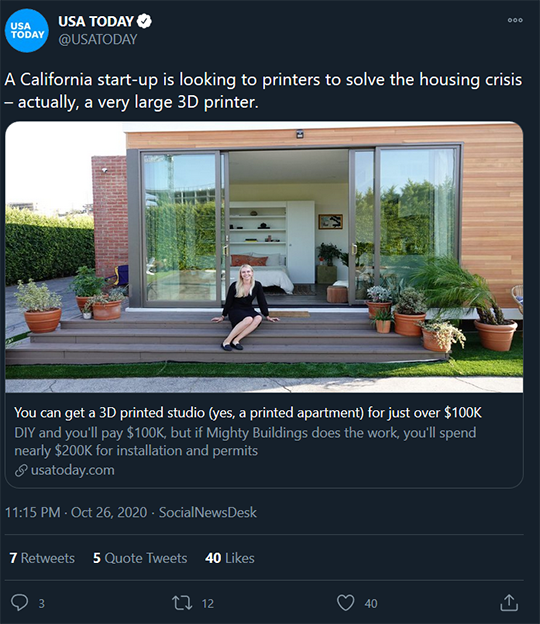 Our science-and-wealth maven Ray Blanco calls our attention to a USA Today article about a California startup called Mighty Buildings. It’s using a super-sized 3D printer to build the frame for what it’s billing as 350-square-foot studio apartments.

Actually, the “accessory dwelling units,” as they’re known, are intended for backyards. So they’re a modern twist on the “granny flats” of old.

Owner Sam Ruben invokes another blast from the past when describing his product — the pre-assembled kit homes that Sears sold in the early 20th century.

Except now construction goes much faster: "It shouldn't take months to build a home," says Ruben. "We can do an entire shell in one day” — and two weeks to complete the studio model.

Cost? $115,000. Of course, this is California we’re talking about, so there are a boatload of bureaucratic hoops to jump through. But Ruben says he’s got you covered there, too. Throw in permitting, utility hookup and installation and your total cost is $184,000.

Staying in California, we see a fallen titan of finance is making the wrong sort of headlines these days… 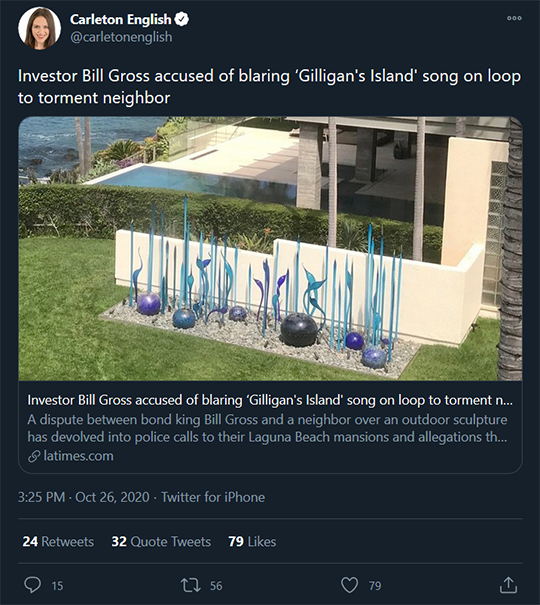 Time was that Bill Gross was known as the “Bond King” for his dominant performance in the fixed income space. At its peak, his Pimco Total Return Fund had $293 billion under management.

Then returns flagged, investors bailed, his star fell and in 2014 he was pushed out of Pimco — the firm he co-founded in 1971.

Now, according to the Los Angeles Times, “A dispute between bond king Bill Gross and his next-door neighbor over a $1 million outdoor sculpture has devolved into police calls to their Laguna Beach mansions, multiple legal actions — and allegations that the billionaire investor blared the Gilligan's Island theme song on a loop at all hours to annoy his neighbor.”

The trouble started when Gross and his partner installed a 22-foot-long blue glass Dale Chihuly sculpture. Neighbor Mark Towfiq, a tech entrepreneur, said he and his wife could deal with that — but not with the giant netting that Gross installed to protect the work after it was damaged.

Exactly how the damage came to be — a thrown rock? a fallen object? — is now the subject of dueling lawsuits. But yes, the highlight is Towfiq accusing Gross of blasting The Ballad of Gilligan’s Island — supposedly to prod Towfiq to drop his complaint.

For now, Towfiq has won a temporary restraining order.

I just got word this morning that James Altucher’s Weekly AlphaBrain Alert is also bumping up against a subscriber cap. As a result, this “glitch-finding” system will be unavailable to new readers after midnight tonight. Last chance at this link.