Halloween is coming a bit late this year in The 5. We have a trifecta of financial scares…

For starters, there’s this one delivered by Establishment media… 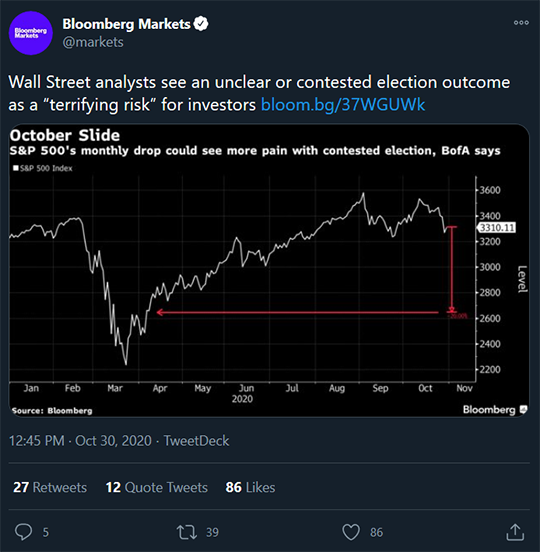 “There’s a ‘terrifying risk’ that an unresolved election could put investors in ‘completely uncharted territory,’ Daniel Ahn, BNP Paribas chief U.S. economist, said by email. ‘If there is a constitutional crisis, we believe that the loss of political credibility and standing of the United States as a stable country could threaten its status as a safe haven with unfathomable consequences for the economy and for markets.’”

Mr. Ahn begs the question of why a nation-state that’s more than quintupled its national debt in only two decades… and whose currency is backed by nothing other than the jawboning of politicians and central bankers… should be considered a “safe haven” in any sense of the word.

Even if there’s a decisive outcome!

It sounds to us as if Wall Street’s broad expectations of a couple weeks ago — that a “blue wave” will readily sweep Democrats into the White House and both houses of Congress, thereby assuring an enormous “stimulus” bill early next year — is less of a sure thing now.

This time, the polls give Donald Trump maybe a 10% probability of winning reelection. But in the betting markets, the probability is more like 40%. Yes, that’s still less than 50%, but it’s a darn sight more than 10%.

Why the discrepancy? The betting markets — populated in part by Wall Street types — seem to be more cognizant of what our macro maven Jim Rickards calls “the shy Trump voter.” That is, someone who keeps his or her Trump support close to the vest for one reason or another, and who’s uncomfortable disclosing that support to a stranger on the phone conducting a survey.

“We won’t find out who won the election tomorrow night. It could be days if not weeks before we find out for sure,” says Jim.

How do you position your portfolio accordingly?

That’s the topic of The 2020 Election Summit, featuring Jim and our investment banking veteran Nomi Prins.

Among the things you’ll learn about — a trade Nomi has already identified with more than triple-your-money potential.

“I expect this trade to start moving as soon as results of the election start to leak to the media,” she says. That could mean even while the polls are still open tomorrow.

Why is she so confident? “Earlier this year my readers had a chance to book 260% gains with this same play — except this time I expect the gains could again be this high or even higher because of the unprecedented situation we find ourselves in.

“Because when there’s this much volatility in the market, you have the opportunity to make larger-than-average gains like we did here.”

Obviously, time is of the essence. So follow this link right now to watch The 2020 Election Summit. We’ll still be here when you come back to today’s 5… 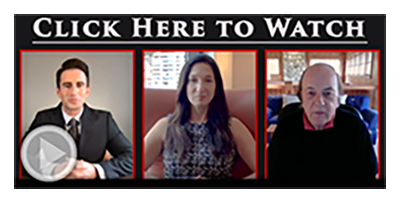 Our second post-Halloween financial scare is the “Zombie Index” of state governments whose finances are in the most frightful shape.

The outfit Truth in Accounting has identified six states that are “in relatively bad financial condition and may also pose higher risks to their citizens and taxpayers from ‘gamble for resurrection’ investment policies, on top of the financial burden they have already accumulated.”

The index gives extra weight to underfunded pensions — a situation that might well lead to “new taxes and weird fees” on the state and local levels, an ongoing theme of ours for nearly a decade.

With the worst listed first, the six most frightening zombies are…

If you’re wondering why Texas is on the list, we dug a bit deeper and checked out Truth in Accounting’s “Fiscal State of the States” report, issued in September. The Lone Star State is staring down $67 billion in unfunded pension benefits and $72 billion in unfunded retiree health care benefits.

Oh, but we’re not done with post-Halloween financial frights. If anything we’ve saved the worst for last… 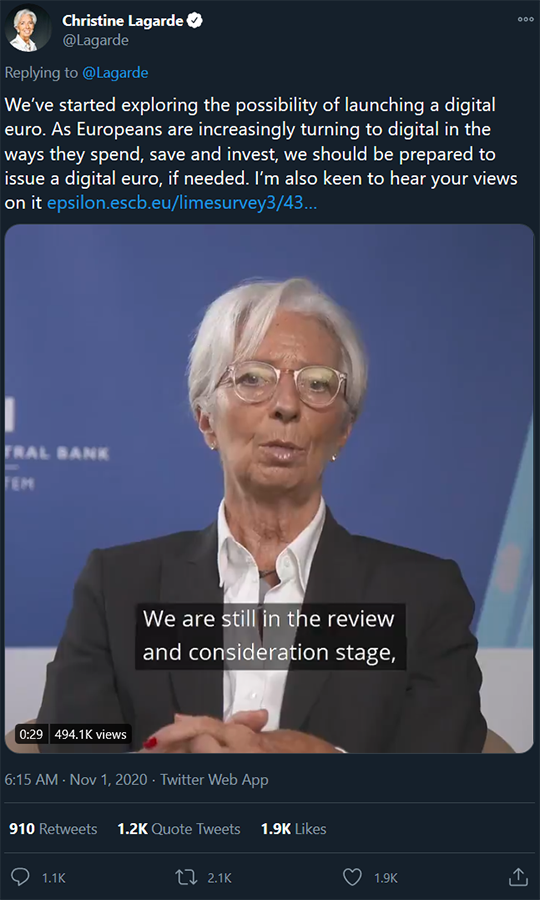 Guess the lockdowns across Europe aren’t stopping the schemers at the European Central Bank.

The details are lacking, but the precedent would be disturbing. A central bank digital currency, or CBDC as it’s known among the economic cognoscenti, can easily be a prelude to the eventual abolition of physical currency — the better to track and tax every transaction in real-time.

A few weeks ago, Federal Reserve Chairman Jerome Powell said he wasn’t in a rush to introduce a fully digital dollar, saying something about how it’s more important to get it right than to get it first.

For the moment, traders have set aside their post-Halloween, pre-election jitters.

➢ Follow-up: Walmart has reversed its decision, noted here on Friday, to pull firearms and ammo off the sales floor for fear of civil unrest. "As the current incidents have remained geographically isolated,” says a company statement, “we have made the decision to begin returning these products to the sales floor." We’re feeling the pain of the employees schlepping product back and forth…

The day’s big economic number is the ISM manufacturing index — which rings in at a crazy-high 59.3 for October. (Anything above 50 indicates a growing factory sector.)

The important new-orders component of the index surged nearly eight points to 67.9. And finally the jobs component is back above breakeven at 53.2.

We emphasize this is “soft data” — a survey. But it will surely raise expectations for the hard data due later this month, like industrial production and durable goods orders. We’ll be watching.

“If we zoom out far enough, the election is nothing more than a short-term distraction,” says our chart hound Greg Guenthner.

“So let’s pretend for just a moment that it’s not happening. Picture yourself in a world where there is no election — no news whatsoever that could interrupt the markets. What do you see?

“I see a potential retest of the September lows if today’s bounce holds. Nothing more, nothing less.”

Yeah, we know — boring. But it comes back to that 3,200 level on the S&P 500 that we’ve been watching for months. It was the market’s ceiling in early summer… and it was the floor back in September.

➢ For the record: So far this earnings season, five out of every eight S&P 500 companies have reported their numbers. According to FactSet, average earnings per share have come in nearly 20% higher than expected. But by the time all’s said and done, profits will still likely be down 10% from a year ago.

At 37.6, the market’s “fear gauge” is pulling back from last week’s highs… 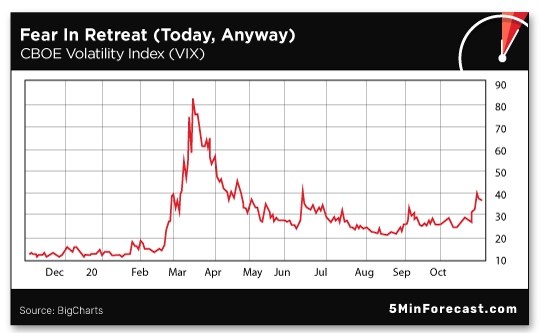 The VIX touched the 40 level last week — as it did in June.

Back then, there was no reason for the pullback other than a sense the market had risen too far, too fast. For all the headline noise about the election and a surge in corona-crud cases, you can’t rule out that possibility now…

A new theater has opened up in the semiconductor wars.

Last week brought news that the chipmaker AMD is buying out Xilinx. For AMD, it’s a huge milestone in a comeback story our Ray Blanco first identified in Technology Profits Confidential four years ago. At the time, AMD was trading for under $5; at its peak this year, it was over $94. It is now the No. 2 maker of x86 CPUs after Intel… and the No. 2 maker of GPUs after Nvidia.

“But AMD wants more,” says Ray. “It wants to own Xilinx, the world’s No. 1 field programmable gate array (FPGA) company, putting it in even more direct competition with Intel.

“FPGAs are general-purpose computing circuits that have the flexibility to be modified. This makes them very attractive in certain AI applications, where they offer a cheaper, faster, lower power-consuming alternative to GPUs. FPGAs have also become increasingly important in data center applications.” They’ll become even more important as 5G and satellite communications grow.

Xilinx shareholders will become AMD shareholders after the takeover — and for them, Ray says it will be a bad deal. He urged his readers to bail from Xilinix last week — with an 83% gain.

No worries if you missed out; you can access Ray’s favorite tech plays right here.

To the mailbag: “Wow, who would have ever guessed you are for Trump, Fox and Rush?

“They really did a number on your reasoning. I’m sorry for you; good luck if Trump wins, you will need it.”

The 5: What in heaven’s name did we say Thursday or Friday to prompt such a reaction?

You have to have a vivid imagination to read anything partisan into anything there. Indeed we went out of our way to simply call balls and strikes.

In part, that’s because we’re reasonably sure our two resident experts for The 2020 Election Summit disagree on many things political. But we know with certainty that both of them are on the side of everyday Americans against the machinations of the banksters who’ve done so much to hollow out the middle class.

If your portfolio hasn’t performed the way you hoped for during 2020, you can turn that around following the guidance in this event we put together just for you. Watch it right here, the sooner the better.

From a reader who signs himself, “Safe in slow, stable Switzerland (I hope it stays that way)”…

“What's the matter with the U.S.? Two old farts are our choices?

“Both sides will contest the election if it doesn't come out the way they want? And both sides have rioters ready to party whatever the outcome? (Sorry, Jim Rickards, it'll happen both ways, not just if Trump wins).

“The only difference between the U.S. and third-world countries are nukes, it seems.

The 5: As long as there’s a functioning internet, we’ll be here…

P.S. The more time that elapses, the less profit potential there is from watching The 2020 Election Summit featuring Jim Rickards and Nomi Prins.

But for the moment, there’s still triple-your-money potential from an election-catalyst trade that Nomi has identified. Watch it right here while there’s still time to act. The link will go dead tomorrow night at midnight.