The U.S. embassy in Berlin is warning Americans in Germany about spreading lockdown protests.

Direct from the State Department yesterday: “There has been an increase in the frequency and intensity of demonstrations and counter-demonstrations, predominantly related to German government COVID 19-related restrictions across Germany. These demonstrations may continue in the coming weeks.

“As with all such gatherings, even demonstrations intended to be peaceful can turn confrontational and escalate into violence. You should avoid areas where there are known demonstrations and exercise caution if you encounter a large gathering or demonstration.”

As happened three weeks ago when Italians fought with police over renewed lockdown measures, there’s been an eerie quiet from U.S. media. Unless you actively seek out coverage on the topic, you likely won’t encounter it on your daily news cruise.

“A hell of a lot of Germans are fed up with what politicians are doing here,” affirms a reader who’s retired U.S. military, now living in Bavaria.

“Just last week there was a demo in Leipzig with several thousands against further lockdowns and denial of freedoms.

“The same applies to other countries/areas here in Europe. The world is a keg of gunpowder just waiting for a fuse to be lit.”

All of which reaffirms our Election Day forecast: If social disorder breaks out, it won’t be because of the election — it’ll be the lockdowns.

When it comes to infection rates, there’s no more than a six-week lag between Europe and the United States. Is there any reason to believe it’s not the same with lockdowns?

Hardly. Here’s what intruded on your editor’s phone at precisely 10:00 a.m. EST in Michigan, telling me what all of us here knew was coming for days… 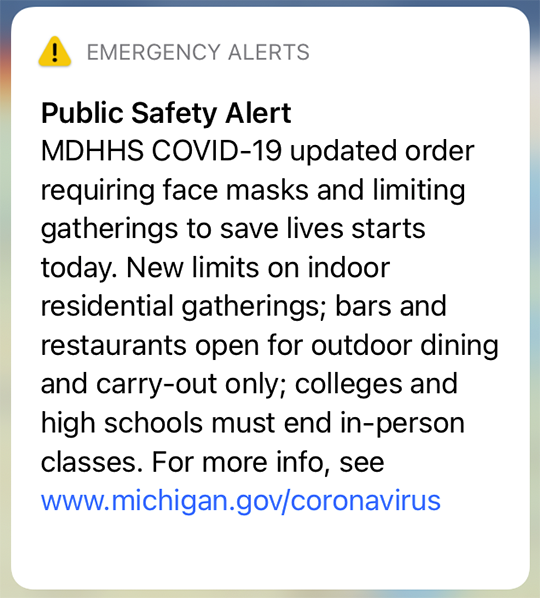 (Thought I’d disabled all that BS except for the stuff from the president that you can’t override. Gotta check settings later…)

Supposedly it’s for three weeks. Ditto in Ohio. New restrictions in Oregon are for two. And so it goes, state by state. Fool me once, right? (Actually, we weren’t fooled at all. We were warning about on-again, off-again clampdowns only days into the first round.)

If there’s a six-weeks-or-less lag between Europe and America on infections and lockdowns… would it be any different with uprisings?

Really, how long do people just sit back and accept provocations like this? 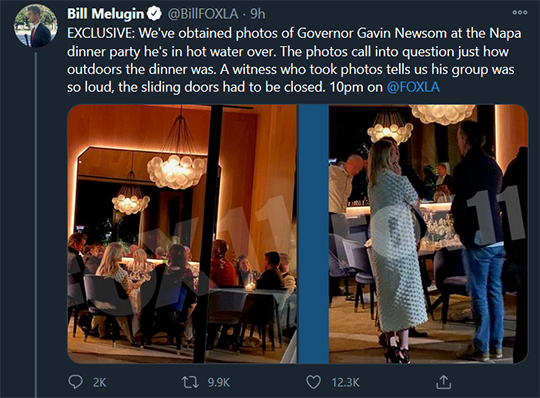 “It was a very large group of people shoulder to shoulder, something that he’s always telling us not to do so yeah it was a bit annoying for sure,” says a woman who was there that night and just trying to have a quiet dinner outside, following the rules. She snapped some photos and sent them to the Fox station in Los Angeles.

The governor is trying to wave it off as “a bad mistake” — at the same moment he’s talking about imposing a statewide curfew.

A few more “mistakes” like that and sooner or later there’s bound to be a backlash.

Meanwhile, the feds can’t get out of the way of real solutions that could help put a dent in the pandemic.

The FDA finally got around yesterday to approving an at-home COVID-19 test. Made by Lucira Health, it can deliver results in 30 minutes.

Unfortunately, for access to this test, you need a prescription.

“Unless every single person gets prescribed the test via telemedicine,” writes Elizabeth Nolan Brown at Reason, “this ridiculous FDA rule has the potential to not only make at-home testing more difficult, less useful and less widespread, but it could also put people at more risk.”

Not that this sort of idiocy is new for the FDA. During the first wave of the virus in the spring, we chronicled how FDA regulations worsened the shortages of surgical masks and respirators. For a while, the agency also put the kibosh on cheap hospital-based tests even though they were already in widespread use overseas.

And yet the president fired no one at a moment he could have and should have performed some serious swamp drainage and maybe saved some lives. Par for the course…

To the markets, where the Nasdaq is back to being the laggard among the major U.S. indexes.

Among the big movers today is Boeing — up 1.5% after the FAA gave its blessing for the 737 Max to return to the skies on the assumption that it’s no longer crash-prone. Elsewhere, Pfizer released final trial results for its COVID vaccine and will seek FDA authorization within days; PFE is up nearly 2%.

For the record: The typical Medicare premium will jump 2.7% next year.

We emphasize this is the increase for the typical Medicare Part B user. Remember, to pay for George W. Bush’s Medicare prescription-drug boondoggle, the Republicans in 2003 instituted a Marxist pricing scheme for Part B premiums. Literally Marxist — from each according to his ability, to each according to his need.

Government in action: The Pentagon says it won’t have a “clean” audit until at least 2027 — a full 31 years behind schedule.

“A clean report is issued when an auditor finds no misrepresentation in financial records and that those records have been maintained according to established standards,” says a story at Military.com. This year’s attempted audit by outside accounting firms set Uncle Sam back $203 million.

We first began chronicling the Defense Department’s inability to track expenses seven years ago — contrasting it with the meticulous record keeping of al-Qaida, heh.

Congress originally passed a law ordering the Pentagon to be audit-ready by 1996. But there were never any “or else” consequences attached to the deadline, which Congress kept pushing back. The Pentagon didn’t even get around to attempting an audit until… 2018.

By one estimate, the Defense Department lost track of $8.5 trillion in expenses between 1996–2013 alone.

Naturally, DoD is falling back on the pandemic excuse. Auditors could visit only 100 locations this year, compared with 600 last year. Convenient, huh?

It’s a marketer’s pandemic dream — a mashup between the pizza craze and the weighted blanket craze.

The takeout-delivery trend has been good for pizza in general — by one account, the average American was spending 24% more on pizza restaurants in August compared with a year earlier.

And the desire for comfort has given a boost to weighted blankets — containing weighted balls or pellets that its makers will tell you have a therapeutic, calming effect.

Now Pizza Hut has collaborated with Gravity Blanket to create, yes, a weighted blanket that looks like a giant pizza — weighing 15 pounds and measuring six feet in diameter.

“The weighted pizza blanket is selling for $150,” MarketWatch tells us, “which is 25% less expensive than typical Gravity pricing.” 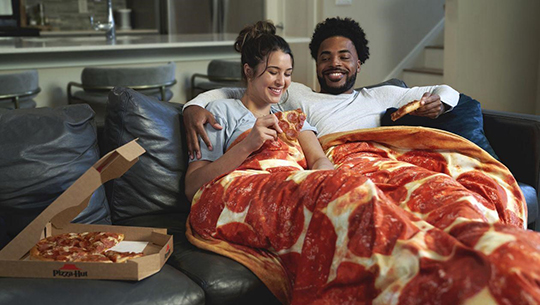 So that’s the trade-off — you get a cheaper-than-usual weighted blanket, but you look like you’re wrapped in grease. Hard pass…

A reader inquiry: “Would you please address and analyze the new trade deal between China and 14 other countries, which was signed this past weekend?

“Is this the beginning of the reserve currency end run?”

The 5: You mean an end to the dollar’s status as the globe’s reserve currency? Probably not. But it’s another milestone on the road to that destination.

The RCEP is one of several international organizations China began spearheading back during Obamatime. In late 2012 when RCEP was nothing more than an idea, we cited experts who called it “another example of the emerging trend in U.S.-China relations where the two countries position themselves — whether consciously or by coincidence — as competitors, rather than as partners."

Fast-forward eight years and Global Times — a reliable mouthpiece for the Chinese Communist Party — wrote in May how RCEP would help spur Beijing to make the yuan more freely convertible than it is now.

“If the yuan is freely convertible and becomes a broadly used major reserve currency — the same as the U.S. dollar, the EU's euro and the Japanese yen — China's economy will regain its righteous place as the world's second-largest economy, and will be less susceptible to the U.S. government's hegemonic power play as well as its erratic and abusive tariffs war.”

Getting from here to there, however, is a heavy lift.

An easier and more likely outcome is the “Axis of Gold” scenario our Jim Rickards has described — in which China, Russia and Iran team up on “a robust multilateral payments system that is free of hacking, tracking or interdiction by the U.S., and free of U.S. dollars. This gold-based payments system will dilute and ultimately eliminate the impact of U.S. dollar-based sanctions.”

“Anyone who thinks you can assess the financial landscape without knowing what the government is actually doing is a fool,” writes a reader from Indonesia, responding to yesterday’s mailbag.

“I notice that those who accuse others of being conspiracy theorists are not open to looking at the evidence whilst those of us who are critical thinkers look at everything so we know what the puppeteers are up to and the wilderness of mirrors that they are pushing people through.

“‘Follow the money’ is a reliable guide to what's really going on.

“Thanks for speaking out… Dig deep.”

P.S. With gold still languishing below $1,900, it’s an ideal opportunity to add to your allocation — if you’re not already at the 10% of your portfolio that our Jim Rickards recommends.

If you are at 10%, then Jim advises you don’t buy another ounce until you take a look at this.