“Always look for Moore’s law investments,” advises our James Altucher — as we carry on with our team’s 2021 predictions.

As you might know, Moore’s law was proffered by Intel founder Gordon Moore in 1965.

“He predicted that the number of transistors that can fit into a computer will double every two years,” James reminds us. “This means computers would be twice as powerful every two years.

“The computer industry was barely functioning in the ‘60s. The computer that powered the Apollo 11, which took Neil Armstrong to the moon, had a processing speed of 0.043 megahertz. To put that in perspective, if you are carrying around an iPhone 12, then you have a computer in your pocket that is 100,000 times faster than the computer that took man to the moon.”

More than five decades after Moore’s law burst onto the scene, James says computing power is accelerating growth in one industry after another.

Today, he joins us to pinpoint three sectors he believes will start taking off in 2021 — a forecast honed by his many years in private equity and venture capital. 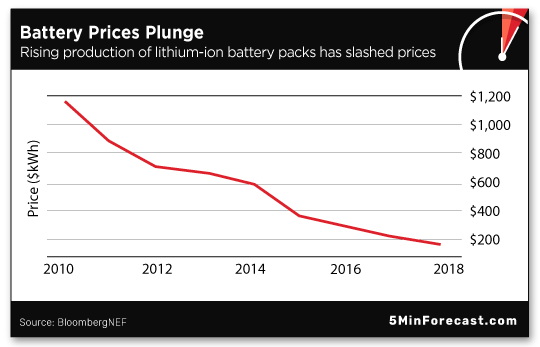 “Which means that electric cars can drive longer without being charged. That means dependence on fossil fuels will go way down. There’s no reason to suspect that this trend will stop.

“Energizer (ENR) and Johnson Controls (JCI) are just two stocks that will benefit.”

“What does this mean? It means that they can now identify which genes cause certain diseases. Using CRISPR technology to edit genes, and as this tech gets even more powerful, they will be able to diagnose and eliminate fatal or chronic diseases in the womb, or even afterward. They will be able to edit other features if they want.”

And finally there’s 3D printing, a phenomenon we’ve followed nearly from the outset in 2012.

And my, how far it’s come: “In 2013,” James recalls, “I was watching a demo of a 3D printer. It took about a half hour and it printed a cheap plastic chess piece. Big deal.

“Now you can 3D-print the house shown below for $4,000. You can print prosthetic limbs and robots. Soon you’ll be able to print food. 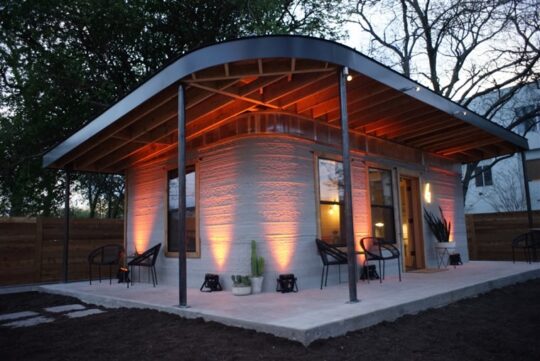 Now… maybe you’re already familiar with these three sectors and you’re thinking, “Duh — those are the obvious names.”

Well, Intel was pretty obvious by the time it went public in 1971. That’s the point, James says: “Intel survived stagflation, wars, the internet bust, the Great Recession and the pandemic… I picked the most well-known names because… why not?

“But go ahead and pick all the stocks in each category. The one thing I would then do is check out a website like j3sg.com to find out which mega-investors — Buffett, Icahn, Renaissance, etc. — are loading up on each stock so you can piggyback their research.”

After all, James concludes, “What good is predicting the future if you don’t make money from it?”

In fact, he’s launched a short-term trading technique that capitalizes on what he calls a “contagion” sweeping Wall Street.

Just what is this contagion? And how can you turn it to your advantage? Answers here. Watch now, because the webpage will expire when the market opens tomorrow morning.]

To the markets — which aren’t reacting the way you’d expect in the face of an imminent communist takeover.

To be sure, the market’s comfortable narrative of the last two months — a GOP-controlled Senate and “divided government” — is looking rather shaky after the runoff election in Georgia yesterday.

As we write, it appears Republican Sen. Kelly Loeffler is on her way out — which will surely open up her investment horizons again, heh — and it’s not looking great for GOP incumbent David Perdue, either. 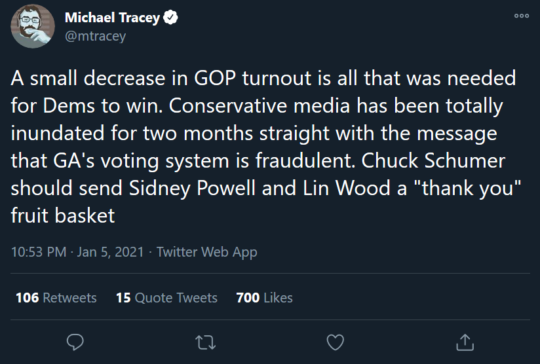 Assuming the kraken is not released while Congress formally counts the electoral votes this afternoon, that would mean a 50-50 Senate with Kamala Harris the tiebreaker come Jan. 20.

The Nasdaq is lagging — up only 20 points on the day at 12,840 and well off last week’s record pace. To hear the financial media tell it, that’s because investors are edgy about what a nondivided government will mean for the tech giants.

[Somehow we have a feeling they’ll be just fine as long as they continue to step up their crackdown on “hate speech” and “misinformation.”]

Presumably on the theory that an all-Dem government will spend into infinity, investors are dumping Treasuries, pushing yields higher. A 10-year T-note just crossed the 1% threshold for the first time since scared money was flooding into Treasuries during the corona-panic last March.

But if that theory were to hold up, gold would be rallying right now. Instead, it’s collapsed $45 and is holding onto the $1,900 level by the fingertips. Silver’s well below $27 again.

One precious metal isn’t sharing in the sell-off today: Rhodium is now a five-bagger in less than two years… and its epic rise still isn’t over.

As a refresher, rhodium is one of the “platinum group metals” along with platinum and palladium. All three are used to clean up emissions from cars and trucks.

Across the world, “You have a massive scramble for metal” by automakers, Coronation Resources Fund co-manager Nicholas Hops tells the Financial Times. “If you don’t have sufficient rhodium you can’t meet the emissions legislation and we know how draconian those fines are.”

The world’s biggest rhodium producer is South Africa — where the virus continues to put a crimp on mine production. Thus, supply and demand are doing their thing; rhodium is now $15,500 an ounce — up another $300 just this morning. 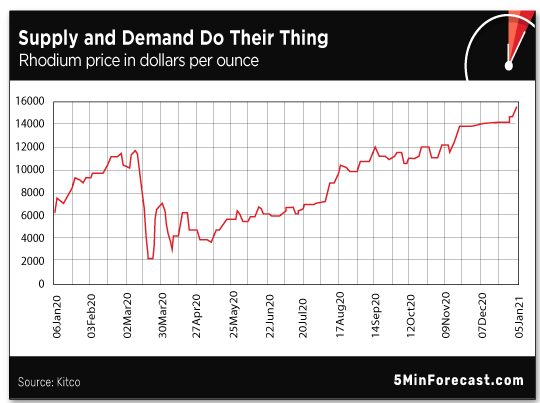 We don’t offer a lot of free picks here in The 5 — this being a free e-letter and all — but in March 2019 when rhodium was still $3,000 an ounce, we mentioned there’s a rhodium ETF you can buy if your brokerage account gives you access to London-traded shares. That’s the Xtrackers Physical Rhodium ETC Fund — ticker symbol XRH0, with a zero at the end.

We daresay it’s not yet time to let go: China’s emissions standards are getting tougher. And while automakers can sometimes substitute platinum or palladium for each other depending on supply and price… when it comes to cutting nitrogen oxide emissions, there’s no substituting for rhodium.

Crude is back above $50 for the first time since the corona-crash — and the move just might stick.

Yesterday, the OPEC nations and other big producers like Russia announced they’d keep production levels flat for the next month. Then Saudi Arabia went and announced a unilateral cut of 1 million barrels a day — fearing the resurgence of the virus will tamp down demand. Thus, the $50 milestone.

This morning brought the weekly U.S. inventory data from the Energy Department — an 8 million barrel drop, on top of the previous week’s 6.1 million barrel decline. At last check, a barrel of West Texas Intermediate fetches $50.72.

“Energy stocks received little love from investors in 2020. And they have a lot of work left to do before they will even come close to their highs from just one year ago. But we are finally beginning to see some buyers step in here.”

Greg directs your attention to this chart of XLE, one of the big energy ETFs (Exxon Mobil and Chevron make up more than 45% of the holdings)… 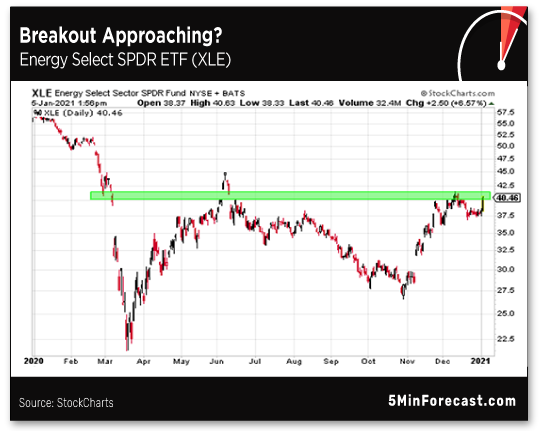 “Yesterday’s 6% gain could spark XLE to attack its early December highs,” he says. “From there, the sector still needs to rally 10% to reach the top of its summer 2020 spike.”

No guarantees: “Comeback moves like these can be especially fast. They can also fail spectacularly. I’ll be watching to see if XLE can successfully clear the top of the green line before trying to make a move on these names on the long side.”

To the mailbag, and some peculiar reaction to our final episode of The 5 in 2020 — which was in fact a reprise of some musings first published last spring…

First, from one of our longtimers: “I think that the Dec. 31 issue of The 5 was the shoddiest one in ALL the years I have been subscribed to the letter. Let us hope and pray that a broader and more open mind prevails in 2021.”

We’re not sure what we said that would have been closed-minded, but another reader did offer up a (slightly) more specific critique…

“To me your article is nonsensical. Boiled down to its essence, it says that because you haven’t seen progress in the categories you were looking for, progress has been slow.

“The number of improved efficiencies, over the last five years, implies that your conclusions are wrong.”

But here again, we’re left to scratch our head. We’re keen to hear what these improved efficiencies are. We hope they amount to something more than new and better ways to work Amazon’s warehouse personnel to the bone so people can get ever-faster delivery of consumer-y junk.

But not every reader came away unsatisfied: “What a powerful summary! Everybody can see themselves somewhere there.”

Presumably — and once again we’re having to read between the lines — he means that nearly everyone can identify with one or another thumbnail sketch of how each generation and/or wealth strata has experienced the past decade.

Anywho, thanks for reading today. Back with more 2021 predictions tomorrow…

P.S. About that “contagion” stalking Wall Street we mentioned earlier…

Warren Buffett likens it to “a rat infestation on the markets.”

But if you protect yourself from this infestation in the right way… you could profit like a reader named Bob who put up $2,000 and turned it into $3,170 in only four days.

Check out how it works right here. Note that due to the controversial nature of the subject matter, we’re pulling it offline once the market opens tomorrow morning.