This after a federal trifecta — the DEA, FBI and U.S. Postal Service — raided the premises in late March, absconding with the contents of more than 800 safe-deposit boxes.

Honest customers including Dagny and Howard (pseudonyms) who told Reason they’d opened a safe-deposit box at U.S. Private Vaults in 2017 on the recommendation of a friend.

The couple stored $100,000 worth of cash, gold and silver coins, an heirloom diamond necklace and an engagement ring they intended to pass on to a daughter. 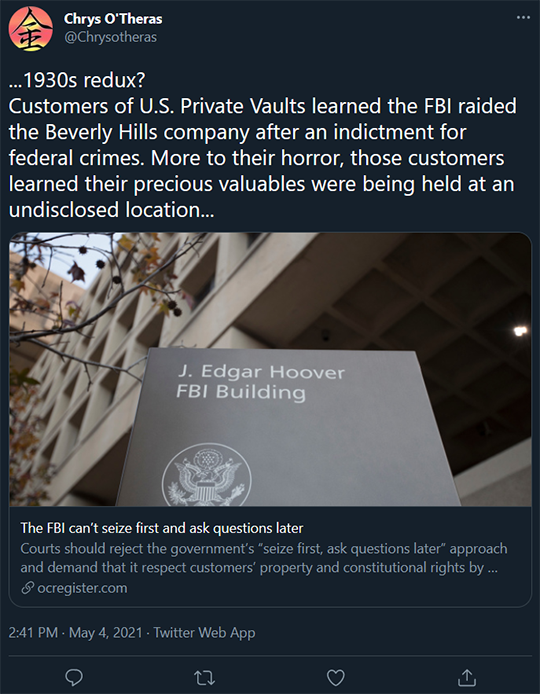 “Howard tells Reason there was no attempt made by the FBI to contact him, his wife or their heirs — despite the fact that contact information was taped to the top of their box. Six weeks later, the couple is still waiting for their property to be returned…

“In order to have the contents of their boxes returned,” Reason reports, “federal authorities are asking owners to come forward, identify themselves and describe their possessions.”

“Legal efforts to force the FBI to return the items seized during the March 22 raid have so far been unsuccessful,” Reason says, “but at least five lawsuits are pending in federal court.”

“The Constitution does not abide guilt by association,” argues Robert Frommer, an attorney with the law firm Institute for Justice.

Fourth and Fifth Amendments, anyone? We’ll keep you posted…

[If you’re ready to buy some gold and silver, you should know about our partners at Hard Assets Alliance. We’ve been working with them for over a decade now.

Some things to know about the Hard Assets Alliance and their precious metals service:

And there are even more benefits to working with the Hard Assets Alliance… But you get the idea.

For anyone who wants to invest in precious metals, take a couple minutes today and open an account with the Hard Assets Alliance… It’s totally FREE to get started. Check it out. You’ve got nothing to lose by doing so.]

No matter how you measure it, April’s Consumer Price Index (CPI) came in way hotter than expected…

Whoops, turned out to be 4.2%. The biggest since September 2008, just before the Panic of ’08 hit full-bore. And the month-over-month figures? 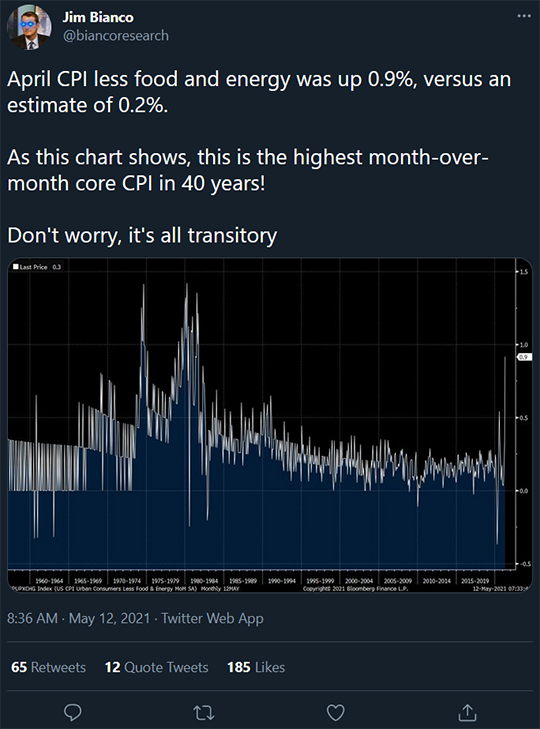 The “food and energy are volatile, so you have to factor those out” excuse doesn’t work here: the ”core” CPI rate clocks in at 0.9% month over month and 3.0% year over year —- waaaay more than expected. In fact, year-over-year growth in core is the biggest since January 1996.

So? Even the inflation rate for people who neither eat nor drive is racing away…

Our market analyst Greg Guenthner agrees on inflation data: “The market doesn’t like it at the moment. Some strange action across the board here..

“The ‘logic’ must be that the Fed’s hand will be forced sooner rather than later to contain inflation,” Dave says via an IM conversation this morning. “I’ll happily take the other side of that trade,” he asserts.

Retirement specialist Zach Scheidt compares your retirement savings and inflation to… running on a treadmill?

“It can be so frustrating to set money aside for retirement and invest that money wisely so it generates the income you need,” he says.

“And then for inflation to turn the speed up on the treadmill and make your money work harder just to keep up!

“Which is why I want to show you some specific areas to invest so your retirement savings will grow faster than inflation,” says Zach. “That way, you can step off the ‘treadmill’ and get your retirement plan in better shape.

“One of the best ways to use inflation to grow your wealth right now is to invest in financial stocks like banks and investment firms,” Zach says.

“Inflationary forces have been driving asset prices higher just like it drives prices up for the things you buy.

“Finance firms and banks can make tremendous profits from their investment books,” he continues. “They also charge fees to wealthy customers… as stocks move higher.

“Plus, when inflation picks up, the Fed has no alternative but to raise interest rates,” says Zach, “which naturally leads to better profits for traditional banks who can lend at higher rates.

“Add it all up — inflation on Wall Street and Main Street, the prospect for higher interest rates and an economy that’s heating up — and you get a perfect environment for financial stocks.

“Companies that sell consumer staples — the products we buy week after week — will also do very well in this environment,” Zach says.

“The more these companies can manage costs while selling products for higher prices, the wider profit margins will be,” he says. “And many of these consumer staples companies are very active in international markets, adding another layer of profitability.

“Bottom line: Stocks in the consumer staples sector offer some of the best ways to protect against inflation and help your wealth grow more quickly than the treadmill of inflation can set it back.

“You’ll definitely want to keep up with these inflation plays to ensure that your retirement stays healthy,” Zach concludes.

“Bernie Sanders Is (Mostly) Right About the SALT Deduction,” proclaims a headline at Reason.

“As a result of [the TCJA of 2017], Americans are allowed to deduct a maximum of $10,000 in state and local tax payments from their federally taxable income,” Reason reminds. “Previously the deduction was uncapped, and it overwhelmingly benefitted the richest households…” 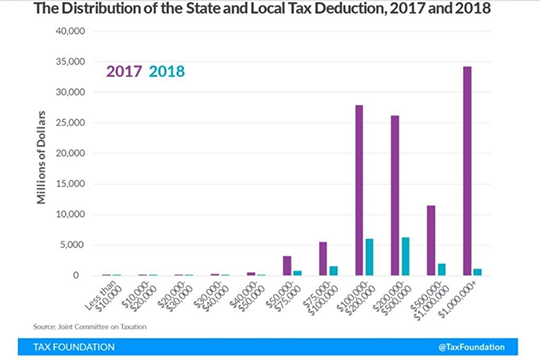 Per repealing the SALT cap, Sen. Sanders (I-Vermont) tells Axios: “It sends a terrible, terrible message when you have Republicans telling us that this is a tax break for the rich.” (Emphasis ours… heh.)

While his fellow politicos from New York and California are intent on uncapping SALT deductions, Bernie says: “In fairness to Schumer and Pelosi, it is hard when you have tiny margins, but you have got to make it clear which side you are on — and you can’t be on the side of the wealthy and powerful if you’re going to really fight for working families.”

Pick a side, in other words? Seems to have been the Dems’ messaging problem since — at least — 2008…

California’s ginormous pension fund CalPERS is under fire for misaligning with oil industry BP over a new climate change initiative. And it’s probably not what you think…

At its annual shareholder meeting today, BP will vote on a resolution from activist group Follow This which “calls for the oil company to rework its net-zero plan and make more drastic emissions cuts to align with the Paris climate accord,” says the Financial Times.

“CalPERS, which holds the rotating chair position at CA100+, a group that represents investors holding $54 trillion in assets and campaigns for companies to cut their carbon emissions, has said it will vote against the resolution.”

What gives? “More drastic emissions cuts” seems like the most California thing ever, right?

According to World Oil magazine: “CalPERS has voted in favor of Follow This resolutions in the past. But this time around it has flagged that it won’t support the… resolution at BP, citing ‘concerns with the duplicative nature of the proposal and its binding intent.’”

“This shows that CalPERS, [like] many investors, likes to pretend to act on climate rather than really acting on climate,” concludes Lucie Pinson of Reclaim Finance. Our take? CalPERS is looking out for the bottom line of its pension holders…

A gem from the outta-touch politician file: NYC mayoral candidate — and Obama’s housing secretary — Shaun Donovan was asked about the price of city real estate…

For the record, I guessed a cool million for Brooklyn’s median home price, but I still would have lost to Donovan. In a game of The Price Is Right, that is…

“Zach, I feel ya, buddy,” a reader writes, responding to Zach Scheidt’s experience at an understaffed Starbucks.

“I started brewing my coffee at home after the onset of COVID and have been bringing it to work to avoid the morning congestion in the break room.

“But last Thursday after ordering (and paying) online, I took a 15-minute walk to pick up my lunch at Taco Bell and the sign on the door said, ‘Sorry, opening at 6 p.m.!’ But I’m hungry now!

“Long, sad walk back… Keep up the good work!”

“That was a weak answer on the coming digital dollar and gold,” a reader says about Dave’s take at the close of yesterday’s episode.

“You should do an entire missive on what precious metal holders can look forward to if Fedcoin or digital dollars ever come along. I want to stay in gold because I feel that cryptos are tulips.”

Dave reports: “I’ll take another stab at it tomorrow.”

Until then, take care…

But what happens when someone takes your gold and you don’t have any insurance on the physical metals?

And to make it worse… What happens when the “taker” is the FBI?

Unfortunately, it’s unlikely the honest folks in our lead story today will get their gold and silver back anytime soon. Dealing with the feds is no easy process…

Which is why when you decide to buy gold and silver, partnerships matter.