Before we get to our main topic today, a free-speech alert… 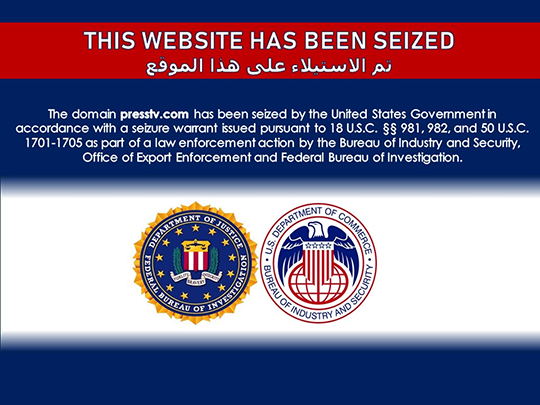 You’ve probably heard the news by now: The U.S. government has seized the U.S.-based dot-com domain of Iran’s state-run English-language news channel Press TV — along with several others linked to the Iranian regime. (The website is still available via an Iranian dot-ir domain.)

So far, the Justice Department has offered no official explanation — only sly leaks to favored media outlets suggesting the rationale is “disinformation,” possibly related to U.S. elections. In the absence of an official explanation, the only one that makes sense is “Because we can.”

Yes, it’s a foreign government. But if its web domain isn’t safe… how safe is anyone else’s?

From where we sit, it’s just one more lurch down the slippery slope of government and social-media censorship we first decried three years ago when Alex Jones was abruptly “deplatformed.”

As we said at the time, we have a supremely vested interest in free-speech issues: Financial newsletters were the original “alternative media,” flexing their First Amendment muscles many decades before the internet came along.

We’re fans of neither Alex Jones nor the Islamic Republic, but if we don’t speak out for them… well, it’s the whole Pastor Niemöller “first they came for the socialists and I did not speak out” thing.

Team Biden’s promise of “no tax increases on incomes under $400,000 a year” is looking more hollow by the day.

The Tax Policy Center has dug into the White House’s 2022 budget blueprint. It finds that yes, the lion’s share of Biden’s proposed tax increases falls on higher earners — indeed, over $800,000 a year.

But a higher corporate income tax rate would ultimately get passed on to everyday folks in the form of higher prices for goods and services.

How much? We’ll concede there’s a huge “fudge factor” in making these sorts of calculations, but the Tax Policy Center is a center-left think tank, not some Koch-funded outfit. And by its reckoning, households earning between $75,000–100,000 a year would end up forking over an additional $440 a year.

So much for making the corporations pay their “fair share.”

At the G7 summit a few days ago, leaders came to terms on a worldwide minimum corporate income tax rate — 15%. “Expect this to become law in the next year or two,” says our Jim Rickards — who anticipated this very development in his 2016 book The Road to Ruin.

“Developed economies have been fighting a losing battle when it comes to collecting what they view as their fair share of tax,” he explains. “As long as there are diverse tax rates around the world, some tax havens and a dense network of bilateral tax treaties with highly technical provisions, it’s easy for major corporations to avoid paying any tax at all.”

Jim knows this firsthand, having cut his teeth in finance as an international tax lawyer for a megabank. “It was easy to zero-out our U.S. tax liability,” he recalls.

“If we paid any tax at all, it was only to keep up appearances and avoid political blowback. We once structured a deal where we wrote off the same 747 aircraft in three different countries using shifting definitions of ‘lease’ and ‘loan’ and inconsistent tax treaty provisions.

“Today, Big Tech will invent a new technology in California and donate the patent to an Irish subsidiary at a time when the patent has not been used and arguably has a low value. Then, voilà, the patent is used in a new smartphone that generates billions of dollars of revenue.

“Of course, that revenue goes to Ireland with a 12.5% tax rate instead of staying in the U.S., where it was invented, with an average corporate tax rate of 25.8% (including state taxes).”

Enter GloboTax: “This world tax plan is designed to impose a minimum corporate tax on all major corporations regardless of where they invent property or source revenues,” says Jim.

“Countries would work together to give the corporations nowhere to hide. Information would be shared among tax authorities so that each country could see the big picture and not just their slice. Tax havens such as the Cayman Islands, Malta and the Channel Islands would find their access to global payments systems cut off if they did not cooperate.

“Once the world tax was collected, the money would go into a pool to be divided among the affected jurisdictions. Countries might still argue among themselves as to which country got which share, but that would be a matter for the sovereign governments. The corporations would have no say in this; they would have already been fleeced by the world tax authority.”

Again, Jim expects a final plan to come to fruition no later than 2023. Aside from the fact corporations pass along higher tax costs to their customers, “it’s just one more reduction in corporate profits, one more drag on economic growth and one more headwind for major stock markets.”

In the meantime, though, it’s full speed ahead for U.S. stocks — with tech once again taking the lead today.

The big economic number of the day is the “flash PMI” reading on the economy’s performance so far in June. It rings in at 63.9 — well above the 50 dividing line between growth and contraction — but down from 68.7 the month before, and well below expectations. The mainstream consensus is this is a good thing because it means the economy isn’t running “too hot.” We shall see…

Elsewhere, new home sales fell 5.9% from April to May… but the median selling price for new construction rose to $374,400. The good news is that builders have at least started to catch up with demand; it would take them 4.8 months to clear out all their inventory if they brought nothing else to market. That’s the highest inventory figure this year.

We’ve long advocated a wall of separation between your politics and your investing decisions… but Rep. Virginia Foxx (R-North Carolina) is taking it to a whole new level.

“Foxx has made a career of blocking cannabis reform in the House of Representatives,” says our pot-stock watcher Ray Blanco, “voting ‘no’ on everything that’s come her way going back 16 years.” And with a spot on the Oversight and Reform Committee, she’s not just a backbencher, either.

But “while she may be the final boss where cannabis legislation goes to die, she isn’t stupid about what’s coming next,” says Ray. “Despite her opposition to reform and legalization, she’s loaded up on cannabis stocks, making her the top purchaser in the space since last year, according to market research site Unusual Whales.”

To be sure, that’s entirely attributable to a position in Altria (MO), heretofore better known as the maker of Marlboros. (Makes sense, hailing from the state synonymous with tobacco, right?)

But MO has a 45% stake in one of Canada’s biggest cannabis players, Cronos Group. Think she even knows? Heh…

We’re liking this Unusual Whales bunch, by the way. They were the first to notice back in April that House Speaker Nancy Pelosi’s husband loaded up on Microsoft call options shortly before MSFT won a juicy Pentagon contract.

And now, the recovery as told through two charts of activity in New York City.. 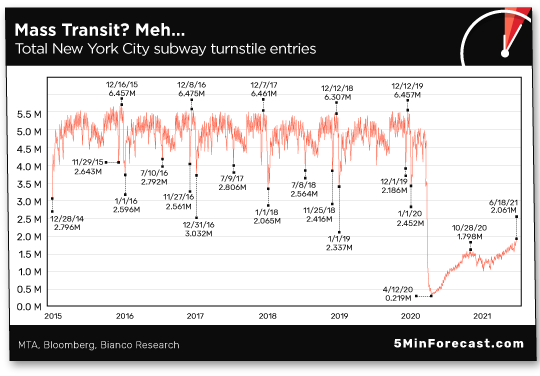 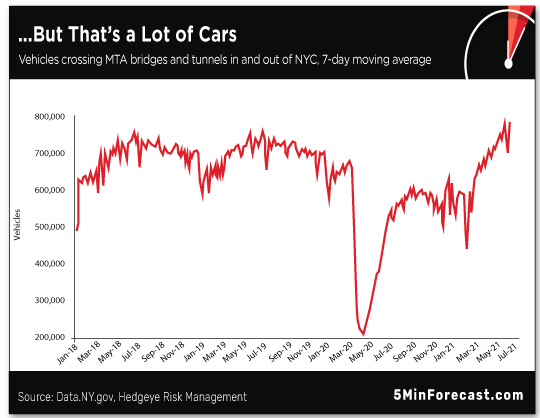 New York subway traffic is still nowhere near pre-pandemic levels… while vehicle traffic on the bridges and in the tunnels leading into and out of the city is setting records.

The data is interesting in its own right, but we point to it to underscore something we’ve mentioned before: The Great Reset/climate change elites want us all crammed like sardines into dense urban centers, reliant on mass transit to get from place to place. But that’s not how it’s working out right now, is it?

Of course, that won’t stop the elites from scheming. Which reminds us — on the “stop eating meat” front, dig this (the clip is only a minute or so)… 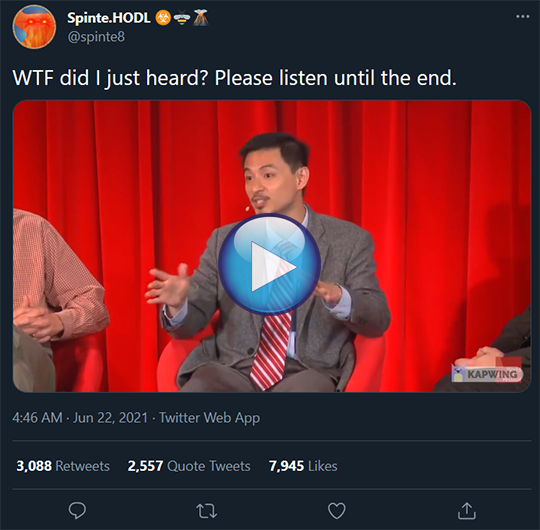 And this guy is a “bioethicist” at New York University!

Just passing along as a public service. Is there some other name for what he advocates besides “neo-eugenics”?

But it’s for the good of the planet, of course. Wonder if he takes the subway to get to work at NYU…

To the mailbag, and a reader following up on one element of Jim Rickards’ analysis yesterday…

Specifically, this observation of Jim’s : “Data shows that 75% of the government handouts have either been saved or used to pay down debt. Only 25% have been used for consumption. That’s a pathetic amount of bang for the buck.”

Says our reader: “That appears to prove that the handouts were given to the wrong people. Those that were really hurt by the economic effects of the pandemic needed the money to live, rent, food, the basics. Is it so hard to primarily help those who need help?

“Thanks for the insight.”

The 5: It is hard when you’re in a hurry. Only days into the lockdowns, we spoke of the crisis-must-act-now atmosphere overwhelming Washington, D.C. One result was that there was next to no congressional oversight of the $454 billion in bailouts handed willy-nilly to corporate America.

And as Emily chronicled in our most recent Saturday edition, to this day there are examples of rampant fraud in the Paycheck Protection Program. Some are being caught, but surely not all…

We’ve told you how Jim has developed a proprietary system to allow you to skim a portion of the $6.6 trillion that changes hands every day as nations wage economic warfare on each other.

We’ve also told you how this system has demonstrated potential for average 160% gains every 45 days.

Now it’s your turn. Check out Jim’s COBRA system at this link.