The currency wars are back. Really, they never completely went away.

It was in September 2010 that Brazil’s finance minister Guido Mantega brought the term into popular usage among global finance types. “We’re in the midst of an international currency war,” he declared, “a general weakening of currency.”

The following year, our macroeconomic maven Jim Rickards quite literally wrote the book on Currency Wars — the first volume in a quartet of titles he published during the 2010s.

As Jim saw it, the first shot was fired by Barack Obama in his January 2010 State of the Union address — when he announced something called the National Export Initiative.

Its aim — to double U.S. exports in five years.

“The traditional and fastest way to increase exports had always been to cheapen the currency,” Jim explained in Currency Wars.

And everyone around the world knew it. Cheapening the currency makes your exports less expensive for foreign buyers.

Thus began a race to the bottom, nations scheming to undercut each other with competitive devaluations.

In the book, Jim chronicled the histories of two prior currency wars…

1921-1936 — Beginning with Weimar Germany’s epic devaluation of the mark and ending with a three-way truce among future WWII allies America, Britain and France. In between, FDR radically devalued the dollar against gold — from $20.67 an ounce to $35

1967-1987 — Beginning with a devaluation of the British pound and ending with the Louvre Accord signed by six of the G7 nations. In between, Nixon severed the dollar’s tie to gold, setting the stage for near-runaway inflation by the late ’70s.

“The fact that the new currency war is still going on after 11 years comes as no surprise,” Jim tells us this week. “It’s completely consistent with my thesis that currency wars last 15 years or more.”

There are ebbs and flows over such long stretches of time. “The currency wars cooled off after 2012,” says Jim, “because U.S. deficits came back under control (down to around $500 billion instead of $1 trillion) and steady growth persisted.

“Also, under President Trump currency wars were replaced by trade wars. Trade wars have their own problems, but the focus was off currency devaluation at least for a time.”

Now it’s all heating up again.

And while Biden is hanging onto most of the Trump tariffs, he’s not adding new ones. “So,” Jim says, “it’s back to the currency wars for export growth and imported inflation.”

That’s because of the proprietary COBRA system Jim has developed — click here to learn what COBRA stands for — opening the way for you to profit from the movements of currencies without the hassle of playing the forex markets. (Seriously, that’s for pros only.)

Jim issued the first regular recommendation in his new Tactical Currency Profits service this week. It’s a textbook example of how to turn a small fluctuation in currency values into potentially huge profits.

Alas, the timing for our launch of this new premium advisory was just a little off. We can only imagine the massive gains to be had late last week when the Federal Reserve threw markets a curve by suggesting it might raise short-term interest rates sooner than previously expected.

To be sure, it’s not an auspicious start for Biden’s currency war: “In recent trading,” says Jim, “the dollar has actually been getting stronger, not weaker.”

For real. Look at the huge three-day leap in the U.S. dollar index — a widely used yardstick measuring the dollar against six other major currencies… 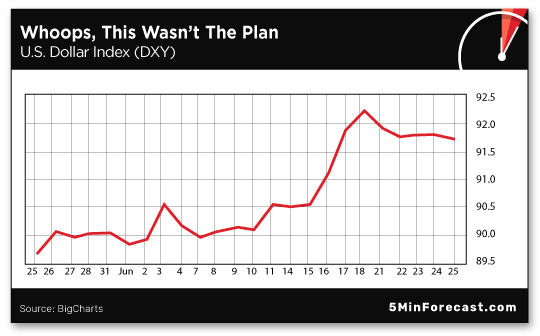 But that’s all right. Foreign exchange is the world’s biggest asset market, with $6.6 trillion changing hands daily. There’s always an opportunity to skim profits off the top of this massive money flow… and COBRA makes it possible for you to collect substantial gains without setting up a forex account or engaging in risky leveraged trades.

How substantial? We’re talking about the potential to collect average gains of 160% every 45 days. 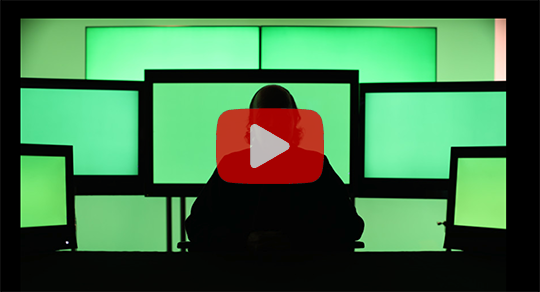 In the ongoing do-si-do among the major U.S. stock averages, it’s the Dow’s turn to take the lead today.

Volatility as measured by the VIX is the lowest it’s been all year, at 15.4. “What we’re seeing here is a series of lower lows, and lower highs,” observes our Alan Knuckman. 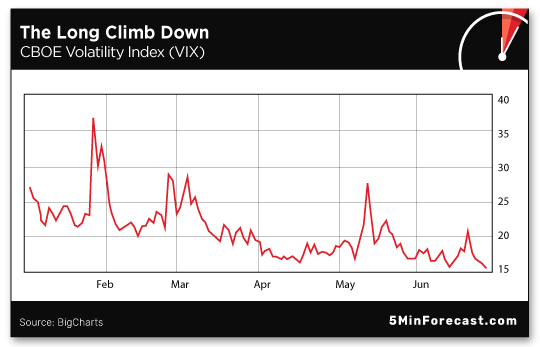 “When the VIX is low it means that volatility is low — this paves the way for stocks to enjoy a steady climb. A low volatility index is usually a sign for bulls that it’s time to buy.”

The Commerce Department issued its monthly income-and-spend report — which includes “core PCE,” the Federal Reserve’s preferred measure of inflation. To no one’s surprise, it’s now running 3.4% annually — highest since the early days of the recovery from the 1990–91 recession. “Base effects” continue to make year-over-year comparisons look extreme; Jim Rickards still insists inflation will back off in the second half of 2021 before taking off again next year.

Elsewhere in the report, we see personal income falling 2% in May as a few states began cutting off those $300-a-week bonus unemployment checks. Consumer spending was unchanged.

For the record: Every major U.S. bank has passed the Federal Reserve’s bogus “stress tests” with flying colors.

This year’s war-game scenario entailed a severe global recession and double-digit unemployment. (Didn’t we have that just last year?) The Fed concluded that under such circumstances, the banks’ capital ratios would still be more than double the minimum requirements. Uh-huh.

As a result, the Fed has nixed the limits on all 23 banks’ dividends and share buybacks. Not surprisingly, bank stocks are jumping today — Wells Fargo is up 3%.

The stress-test process has gone through several overhauls since its launch after the Panic of 2008, but one thing remains constant. As University of San Diego prof Frank Partnoy put it in 2009, “There are two problems with the financial stress tests. First, they weren’t stressful. Second, they weren’t tests.”

Follow-up: A federal judge has recognized that due process still means something and temporarily put the kibosh on the FBI’s seizure of 369 safe-deposit boxes in Beverly Hills, California.

We told you last month how the feds raided and shut down an outfit called U.S. Private Vaults — accusing it of money laundering among other offenses.

The warrant expressly forbade the FBI from seizing the contents of customers’ boxes… but the FBI went and did it anyway, not bothering to charge those customers with a crime. Then the agency moved forward with civil-forfeiture proceedings. That’s the Kafkaesque legal maneuver in which you’re not charged with a crime, but your stuff is… and the protections you’d get in a criminal case don’t apply.

Judge R. Gary Klausner was having none of it in a temporary injunction issued Tuesday. “This notice, put bluntly, provides no factual basis for the seizure of plaintiffs’ property whatsoever.”

The Institute for Justice, the nonprofit law firm representing four U.S Private Vaults customers, is delighted. “Hundreds of innocent people have had their lives turned upside down by the government’s $85 million cash grab,” says IJ attorney Robert Frommer. “This order squarely rejects the government’s ‘anemic notices’ as an unconstitutional attempt to take box holders’ property for no good reason.”

No, the story’s not over yet. But we did want to pass along the latest encouraging chapter…

“Just wanted to shed a little more light on the topic,” a reader writes after our latest venture into “conspiracy theories” prompted by the untimely death of John McAfee.

“The very first reference to ‘conspiracy theory’ was in response to the assassination of JFK, and to denigrate those who questioned the official narrative.”

The 5: Oh, sure, you want to open that can of worms — the idea that the CIA popularized the term to discredit critics of the Warren Commission. OK, fine…

“The term ‘conspiracy theory’ did not exist as a phrase in everyday American conversation before 1964,” asserted political scientist Lance deHaven-Smith in his 2013 book Conspiracy Theory in America, published by the University of Texas Press.

“In 1964, the year the Warren Commission issued its report, The New York Times published five stories in which ‘conspiracy theory’ appeared.”

Others have pushed back against that thesis. A professor in Germany, Michael Butter, points out that deHaven-Smith’s work leans heavily on a CIA document addressing critics of the Warren Commission in which the term “conspiracy theories” appears only once (and only in the plural).

Well, hell, they can both be right. And let’s not overlook the decades of the CIA working hand-in-glove with the Times and other media outlets, as Carl Bernstein documented in a famous 1977 Rolling Stone article.

That article dealt primarily with reporters and editors doing the CIA’s bidding, “from simple intelligence gathering to serving as go-betweens with spies in Communist countries,” as Bernstein wrote in the introduction — and not so much the CIA actively “shaping” media coverage for domestic audiences.

But if the agency was working so closely with journalists — Times publisher Arthur Hays Suzlberger even signed a secrecy agreement — how much “shaping” work did the CIA have to do anyway?

P.S. You read that figure right a few moments ago — $6.6 trillion changes hands every day as nations wage currency wars. And by 2025, that figure could reach $9 trillion.

“If I’m right yet again about the way things are headed,” says Jim Rickards, “there’s a way you could play this ‘war’ for major profits, for as long as it rages on.”

Jim’s just taken the wraps off a trading strategy with backtested results showing a 90% win rate. Give it a look right here.