From the annals of more money than sense? Sotheby’s is auctioning a NFT of worldwide proportions… 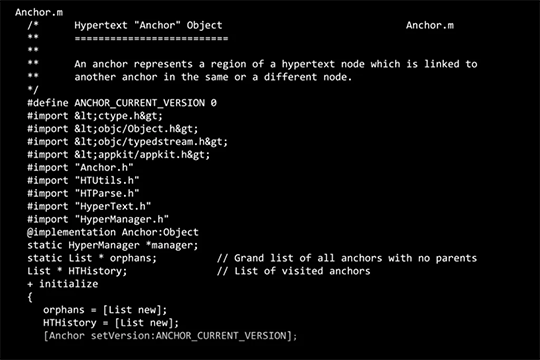 The digital token called Source Code for the WWW (1990–1991) is being sold by computer scientist Sir Tim Berners-Lee, who wrote the original code for the World Wide Web.

The NFT contains 10,000 lines of code plus a personal letter from Sir Tim reflecting on his interwebs process, an animated video and a digital poster.

So far? The current Sotheby’s bid stands at $3 million.

Which is all well and good for Sir Tim… but for your money? Our macro expert Jim Rickards endorses gold. And so we continue our series today on the second of three models for pricing the precious metal…

“For our technical model,” Jim says, “we turn to the two prior bull markets in gold and compare those to the performance of the current bull market.

“We’re not ignoring those [bear markets]…

“It’s simply… that we’re in a new gold bull market now,” says Jim, “so prior bull market behavior is the right reference frame for predictive analytics.

“If we take a simple average of the price gains and durations of the two prior gold bull markets, we arrive at a 1,435% gain over a period of 10.7 years,” Jim says. “Applying that gain and duration to a baseline of $1,050 per ounce beginning in December 2015 leads to a projection for this bull market of $15,070 per ounce by August 2026.

“There’s nothing deterministic about this model,” he emphasizes. “Actual gains could run ahead of this projection both in time and by amount. Conversely, the bull market could end at any time for a wide variety of reasons.

“Still, the bull market assumptions are moderate since we have taken a simple average and not stretched for the higher gain or the shorter duration of the two [prior bull markets],” says Jim.

“Using the history of gold bull markets as a guide,” he says, “a dollar price of gold of $15,000 per ounce in the next five years is not a stretch.”

This after Facebook’s stock closed 4.2% higher yesterday after a U.S. federal judge threw out two complaints filed against the company in late 2020.

According to Business Insider: “U.S. District Judge James Boasberg in Washington ruled that the FTC failed to support its claims that Facebook held monopoly power as it controls more than 60% of the social-networking market.

“However, the antitrust and consumer protection agency has 30 days to refile its complaint and try again.”

Taking a peek at commodities, crude’s just above $73 for a barrel of West Texas Intermediate. Precious metals? The prices of gold and silver have receded today, both down about 1% to $1,762.10 and $25.88 respectively.

Two real estate ETFs, in fact, are poised for their best monthly inflows — almost $4 billion — since 2014.

To wit, “BlackRock’s iShares U.S. Real Estate ETF (IYR) has already taken in $2.5 billion in June, putting it on track for its best month ever,” Bloomberg says. “Another BlackRock fund — the iShares Global REIT ETF (REET) — is headed for its best month of inflows since 2017. 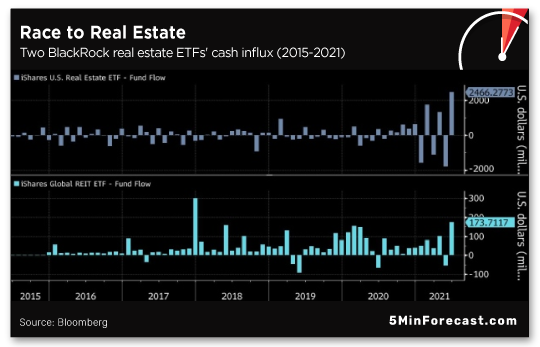 “Many of the category’s products, which invest heavily in real estate investment trusts, are outperforming broad-based indexes,” the article notes. “Vanguard’s Real Estate ETF (VNQ) and BlackRock’s IYR have each gained about 20% this year, compared with 13.6% for the S&P 500.”

Mohit Bajaj of WallachBeth Capital believes the rush to real estate has a lot to do with investors’ appetite for yield. “It seems like the Fed might be raising rates but not anytime soon,” he says, “so real estate and housing-development companies should bode well in lower interest-rate environments.”

Then there’s this: “Historic stimulus measures by central banks around the world and an economic recovery that’s gaining speed are pushing up prices in every corner of the real estate market, fueling what some worry is becoming a bubble.”

A June survey of 29,000 Americans finds most are white-knuckling it till their next payday.

The study sponsored by data agency Pymnts and fintech company LendingClub reveals even among those who earn $50,000–100,000 annually, 53% say they have little to no surplus after paying monthly bills.

Generationally speaking? A prodigious 70% of millennials report living paycheck to paycheck — more than any other generation — with 40% of boomers and 56% of Gen Z reporting the same.

Overall, the survey found 125 million U.S. adults praying for their next paycheck… with the average savings among the 29,000 surveyed just shy of $4,000.

“The fact that so many Americans are living on very constrained budgets may have less to do with the income side of the household ledger and more to do with the expense side,” the report concludes.

Or how about both the income and expense sides? Something The 5’s asserted going back to 2017 — most recently after the Jan. 6 Capitol raid.

Now, from the have-nots to the haves…

GloboTax Update: “[OECD] negotiators in Paris are battling to persuade holdout nations to sign up to a global deal on corporate taxation,” the Financial Times reports.

Less than a week ago, The 5 reported on a measure discussed at the recent G7 summit where world leaders came to terms on a worldwide minimum corporate income tax rate of 15% — something Jim Rickards anticipated in his 2016 book Road to Ruin.

But there are several flies in the Big 7’s ointment: “China, India, Eastern European countries and developing nations have all raised objections to the deal struck by the G7 group of leading economies this month.”

The article continues: “China and many Eastern European countries complain that the deal would disrupt existing tax arrangements which offer manufacturers investment incentives through corporation tax to build factories and machinery by having an effective tax rate lower than the proposed global minimum of 15%.” Well, yeah…

But there’s another opportunity for more arm-twisting at the G20 Summit in October. Otherwise, according to an unnamed FT source: “If we can’t get an agreement at the G20, then the chances are that we’ll have to start over for another 20 years of talks on this issue.”

“The FDA decision on Biogen’s [Alzheimer’s] drug was perhaps the biggest biotech binary event of the year,” says our science and tech expert Ray Blanco.

Still, he admits: “The FDA’s approval of the Alzheimer’s disease drug earlier this month has caused all kinds of controversy… Some FDA experts even resigned over the decision.

“Biogen’s aducanumab hasn’t shown strong signs of efficacy. However, at the doses tested in its Phase 3 trial, it proved relatively safe,” says Ray.

“The FDA split the difference, allowing Biogen to market the drug on the condition that it run what’s known as a Phase 4 trial — a post-marketing trial that must confirm the drug’s efficacy.

“Even with conditional approval, Biogen’s market cap soared by approximately $20 billion on the news,” Ray notes.

“Aducanumab could prove to be a blockbuster for the biotech company,” he says. “However, I strongly suspect that the drug’s efficacy, if it exists, will prove to be relatively mild.

“Even so, in such a case it would still be to be the first disease-modifying drug ever approved for the condition — even if it’s just a speed bump in the path of AD-related cognitive decline.

“But the positive outcome [at the FDA] not only raised Biogen’s market cap by 50%, but the rising tide lifted all boats across the sector… 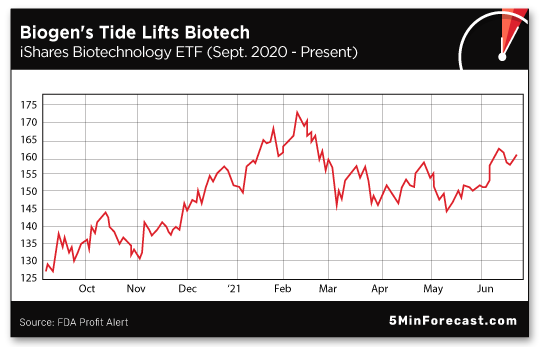 “After trading sideways since early March,” says Ray, “biotech stocks broke out this month and appear to be on an uptrend.

“If sustained, this uptrend should be great for our biotech recommendations as they move to market,” he concludes. “And it won’t hurt for those that are now coming to market either.”

“Don’t get too euphoric about 15K gold, Jim?” a reader remonstrates. “Come on, I feel like a first-time Bitcoin buyer with my longtime gold holdings! Or maybe it’s just this damn heat wave we’re experiencing here in Seattle?

“I actually followed your math in [yesterday’s issue] and like what I’m reading.” As for a return to the gold standard, he says: “Maybe it would save this country from unlimited money printing.

“Anyway, in my gold- and heat-driven madness, I’m going to go run around in my backyard and throw rocks at flying saucers, which the government has confirmed exist.”

You mean the same government that printed trillions of pandemic dollars? Heh…

For what it’s worth, friend, stay cool. And hold onto your gold.

Back tomorrow; till then, take care!