A Riot by Another Name

“CEOs are scared. They don’t like the idea America is a banana republic,” Richard Edelman told the Financial Times.

Edelman is one of the nation’s most successful public-relations pros, a card-carrying member of the power elite, a regular presence at the World Economic Forum’s gatherings in Davos.

Significantly, he said that before the riot on Capitol Hill yesterday.

He was applying the “banana republic” analogy merely to the thought that a few congresscritters would refuse to certify a Joe Biden presidential victory.

The U.S. Chamber of Commerce — the lobbying behemoth that usually supports Republicans — said the stance of those renegade reps and senators “undermines our democracy and the rule of law.”

If CEOs are “scared,” their companies’ investors are not: While the congresscritters were in their hidey-holes yesterday afternoon, the Dow ended the day 400 points higher — notching another record close. As we write this morning, it’s sailed up 100 more — approaching 31,000.

We interrupt this week’s rollout of our team’s 2021 forecasts today — for reasons we imagine you’ll understand.

Money and markets being our beat, we had occasion this morning to reread a few pages of Devil Take the Hindmost — Edward Chancellor’s 1999 chronicle of speculative excess from Holland’s 17th-century tulip mania right up to the cusp of the dot-com bubble’s burst.

Seeing as we’ve been musing about the prospect of a new American Civil War since as long ago as 2017, we zeroed in on his account of the original one. In May 1863, Wall Street experienced a bull market known as the “Chancellorsville rise” — after a Confederate victory in Virginia during which “more than 17,000 Union soldiers lost their lives.

“The market rose because it anticipated a prolongation of the war and the further issue of inflationary greenbacks.”

The striking thing about yesterday’s events is how easily a few hundred protesters managed to take over one of the most-policed patches of earth on the planet.

(Yes, we’ve seen the claims that the cops “let them in.” We’re not persuaded.)

“After 9/11, the Capitol turned into an armed camp,” recalled the veteran D.C. journalist Sam Smith a few years ago.

“The Capitol Visitors Center, under construction, was modified to serve as a bunker for members of Congress in case of an attack and the Capitol police force soared to three officers per member of Congress with the greatest number of police per acre of any spot in America.

“In the end the visitor’s center/bunker would cost over $600 million, just slightly less than the city’s new baseball stadium.”

Fat lot of good it did. A highly garrisoned Capitol Hill turns out to be surprisingly fragile. Hard to think of a better symbolic signpost that we’re way closer to the end of Sir John Glubb’s 250-year empire cycle than the beginning.

“With this unfortunate episode, the U.S. suffers that which it generates in other countries with its policy of aggression,” says a statement from the Venezuelan government.

Venezuela is a basket case, with an unofficial inflation rate of 2,319% last year. At this late stage of the game, it’s hard to say how much of the suffering is the result of socialist mismanagement… and how much is the result of Washington’s economic warfare of sanctions, asset freezes and so on.

Of course, Nicolás Maduro’s government is enjoying a moment of — well, is there a Spanish word for schadenfreude? As you’ll recall, the Trump administration undertook a failed attempt at Venezuelan regime change in 2019 — egging on right-wing mobs and doing so with the hearty support of #Resistance Democrats like Sen. Chris Murphy of Connecticut. Bipartisanship!

After Washington spent decades tut-tutting the rest of the world how to run its affairs, the shoe is on the other foot.

France’s Emmanuel Macron clucked like an assistant deputy secretary of state denouncing a putsch in sub-Saharan Africa: “What happened today in Washington, D.C., is not America.” He seems to have forgotten about his own country’s “yellow vest” uprising — which would still be raging now absent the virus.

And it won’t do to tell the likes of Macron to shut up and mind their own business. Not after 75 years of Washington, D.C., meddling and acting as Globocop.

“No nation could preserve its freedom in the midst of continual warfare,” warned James Madison in 1795.

But in the late 1940s, the U.S. government deemed the Soviet Union such a dire threat that it adopted a posture of permanent mobilization for war. America forever broke away from its moorings as a limited constitutional republic.

The military-industrial complex, the national security state, the foreign policy “blob” — it goes by any number of names. But whatever you want to call it, its incessant world-improving, empire-building and do-gooding has, in a way, all come home to roost now.

Alas, if a new American Civil War is well and truly upon us, the immediate catalyst seems beyond pointless.

For much of last year, the patriot/prepper crowd anticipating societal breakdown adopted the acronym TINVOWOOT — “There is no voting our way out of this.”

Fast-forward to yesterday and what indignity was it that inspired a crowd to storm the gates?

Not their impoverishment for the benefit of bailed-out bankers and crony-capitalist health insurers. Not the maiming and killing of their sons and daughters and brothers and sisters in endless unconstitutional wars. Not the post-9/11 surveillance regime Edward Snowden heroically exposed, seemingly for naught.

No, TINVOWOOT notwithstanding, a bogus “stolen election” narrative is the hill they chose to die on. In the case of a woman from Arizona, literally.

And so we concede we were wrong on Election Day — up to a point.

Going back to 2017, we couldn’t wrap our mind around what might be the defining issue in a new American Civil War — something akin to slavery in the 1860s or independence from Britain in the 1770s.

It couldn’t be something as trivial as an election, could it?

At least right now, that’s what it looks like.

But we stick to our thesis that it’s underlying economic anxiety that’s brought us to this juncture — and especially the Federal Reserve’s policies that have so enriched the elite one-tenth of one percent while the bottom 90% are losing ground.

It comes back to this chart we reproduce every now and then. It’s not new, but we can’t imagine the situation is any better now than it was in 2012, and it’s probably worse. 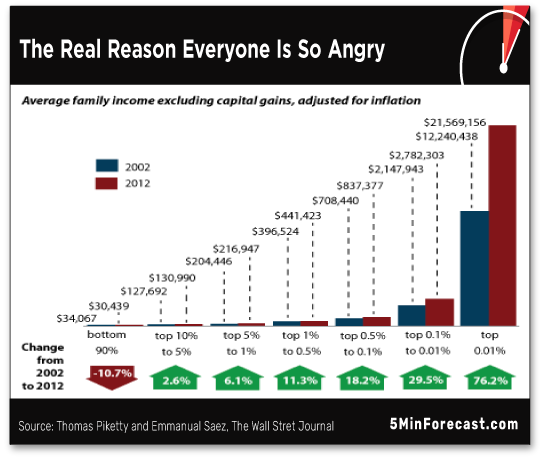 But few Americans grasp that cause-and-effect relationship. As the trouble broke out yesterday afternoon, one conservative blogger got a hand on the elephant’s leg, but that was all…

The American people are suffering through more than just brutal evidence of election fraud and the manipulation of mail-in ballots; we are also dealing with local and state officials who have used COVID-19 mitigation as a weapon to eliminate the livelihoods of the middle class.

The combination of these events creates a “nothing to lose” mindset, and no one is addressing the underlying issue. What we are witnessing is the result of years of pent-up frustration carried by massive numbers of Americans toward the disconnected elitist class in Washington, D.C. None of this should come as a surprise; yet D.C. will stand jaw agape.

Now comes the backlash from a governing class consumed with its own importance. 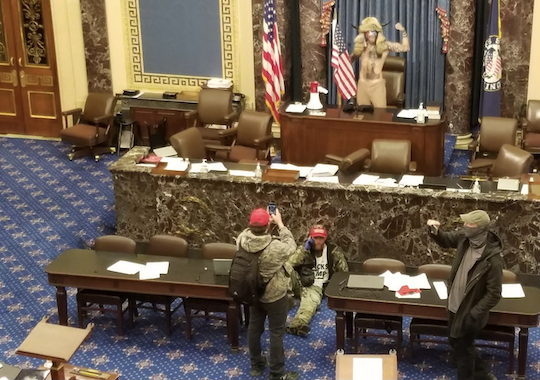 For God’s sake. A coup requires organization. And an endgame. Neither was in evidence yesterday. This was a mob. A mob so ineffectual its only accomplishment was to delay the election’s certification by a few hours.

In fact, it was counterproductive in the sense that several renegade senators abandoned their challenge to the results.

Since when does a cable news channel do anything “official”? Again, the self-importance. And the media’s identification with the ruling classes.

Anyway, there’s much talk now about “terrorism” and “insurrection” and “sedition” — terms that are easily twisted to suit the agenda of whoever invokes them. Word to the wise… 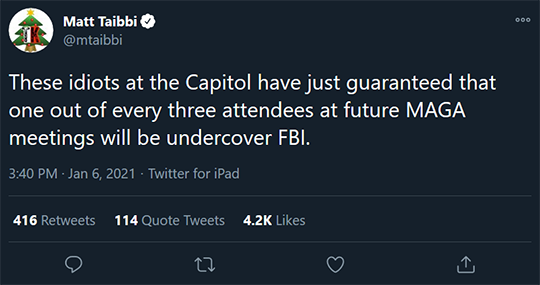 Only a few days after Election Day, we warned how with Trump departing the scene… “the fear factory” of the deep state, traditional media and social media would start to gin up panic over Trump followers and anyone else who strays outside the bounds of acceptable opinion defined by Joe Biden on the left and Mitch McConnell on the right. (The whole thing is as timely now as it was then.)

The yahoos who rushed the barricades have just handed the fear factory an enormous gift.

Along the same lines of twisting words to suit an agenda… 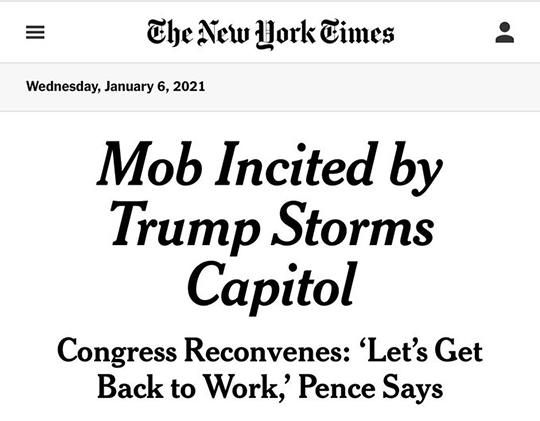 Say what you will about the president’s words yesterday — to us, he’s becoming a tragicomic figure obsessed with the idea that anyone else, friend or foe, might perceive him as a “loser” — they were not “incitement.”

He encouraged a protest march to the Capitol. He did not encourage the marchers to bust in. Was he implying they should? Doesn’t matter if you’re talking about a system where the rule of law prevails. The Supreme Court handed down a sensible and clear definition of incitement more than 50 years ago. This doesn’t qualify.

Of course, there is no rule of law in social media. So both Twitter and Facebook have suspended the president’s accounts — in the case of Facebook, for the duration of his term.

And lest you think we’re straying too far from our financial beat, we remind you about the tax revolt that was crucial to the early American experience — the Stamp Act protests of 1765.

As we said in our most recent musings on the subject, the Colonists’ actions would surely be considered “domestic terrorism” in present times.

We also speculated a day might come when merely recounting those events could be considered “incitement” to a terrorist act and the Supreme Court’s bright lines would start to blur.

We’re a lot closer to that day now than we were just 24 hours ago.

P.S. As we go to virtual press, Senate Majority Leader Chuck “Pearl Harbor” Schumer is demanding the president’s immediate removal from office. And the Dow has added to its early gains, up 200 points now.