A default on the national debt is “unthinkable,” in the words of Treasury Secretary Janet Yellen. This morning, we’re thinking the unthinkable.

Your editor is back home after conferring with colleagues face-to-face this week on the outskirts of Washington, D.C. Our tentative conclusion is that only weeks from now, a looming debt-ceiling crisis in the capital is going to throw financial markets for a loop.

In 2019, Congress suspended the arbitrary limit on federal borrowing, aka the “debt ceiling,” for two years. That two-year suspension ends on July 31 unless Congress acts sooner.

Whenever the ceiling comes back into force, the Treasury resorts to various accounting tricks to stay under the limit, such as borrowing from federal employees’ pension funds. But such “extraordinary measures” — that’s the Treasury’s official term — only go so far. Eventually, there’s a breaking point and Uncle Sam would miss an interest payment to someone, somewhere.

That is, a default.

Said Ms. Yellen to Congress last week — that’s where she invoked the U-word — “It’s possible that we could reach that point while Congress is out [on summer break] in August. I would really urge prompt action on raising the limit or suspending it.”

And so begins a recurring drama in Washington. Most of the time, it’s a circus barely worth our attention. But this time might well be different.

The government has bumped up against the debt ceiling six times in the last decade. Some of these episodes are punctuated by a “partial government shutdown,” others not. Most of the time, markets take it all in stride.

We suspect that won’t be the case now, however. For a host of reasons we’ll get into as July goes on, we have strong reason to believe events will play out much as they did around this time 10 years ago.

Starting on July 22, 2011, the stock market went on a steep skid — falling nearly 17% in 17 days. The government did not default… but something equally “unthinkable” happened along the way: The bond-rating arm of Standard & Poor’s downgraded U.S. government debt from a pristine AAA rating to AA+.

Again, we have reason to believe something similar is in the cards this summer. We’ll get into the details starting next week. We’re just putting it on your mental radar for now…

Besides, you probably have more pressing concerns on your mind. Like, will there be gasoline for your Independence Day getaway?

You might recall our investment banking veteran Nomi Prins tipped us off to this shortage in early May. According to the National Tank Truck Carriers, a shortage of qualified drivers had idled at least 20% of available trucks. Spot shortages erupted in Florida, Arizona and Missouri.

On the eve of the proverbial “long holiday weekend,” Nomi says matters are no better: “The COVID-19 pandemic prompted some truck drivers to retire or find another place to work within the trucking industry or outright leave to another industry altogether. Combine that with the fact 43.6 million Americans are prepared to travel this weekend, it could create long lines in some places at the pump.”

In recent days, pockets of trouble have emerged on the West Coast, as well as Colorado, Iowa, and along the I-70 corridor in Indiana and Ohio.

But ultimately, “It’s hard to predict where the challenges are,” says Patrick DeHaan from the GasBuddy price-tracking website. “It’s just randomized pockets in cities both small and large,” he tells CNN.

The second half of 2021 begins with the stock market — as measured by the S&P 500, anyway — inching still higher into record territory. 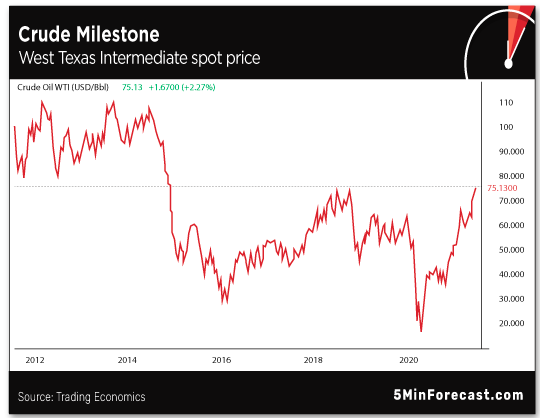 The big economic number of the day is the ISM manufacturing index: At 60.6 it rings in lower than expected but still well above the 50 dividing line between a growing factory sector and a shrinking one.

The “internals” of the report are interesting, if not altogether surprising: New orders are solid at 66, but manufacturing employment is stagnant at 49.9. And manufacturers’ costs? Ooh boy, the prices-paid component is 92.1. (If it were 100, that would mean every survey respondent was reporting a monthly increase.)

Robinhood: There’s the action, and then there’s the reaction.

The action was taken yesterday by FINRA, the securities’ industry’s self-regulating body — a $70 million penalty on Robinhood “to resolve sweeping regulatory allegations that the brokerage misled customers, approved ineligible traders for risky strategies and didn’t supervise technology that failed and locked millions out of trading,” as this morning’s Wall Street Journal puts it.

So apparently this penalty covers a kitchen sink of sins — not the least of which is restricting its mostly young and hip customers from buying shares of GameStop, AMC Entertainment and similar names at the peak of the first meme-stock frenzy in late January.

Which brings us to the reaction: Having essentially paid $70 million for a get-out-of-jail-free card… Robinhood let it slip this morning that it plans to set aside up to 35% of shares in its imminent IPO for retail investors — i.e., its mostly young and hip customers.

“That’s a much larger retail allocation than in a typical deal,” the Journal informs us. “Robinhood wants people to sign up to buy the shares on its new platform that gives users access to IPOs before they start trading.”

Chutzpah, thy name is Robinhood…

[Just in: As we go to virtual press, Robinhood has submitted its IPO filing — disclosing for the first time that it makes a profit. You know, off all those customers it takes for granted and wants to buy its spiffy new shares. Brazen, just brazen…]

“I think most casual observers are confused about what ‘cloud computing’ actually means,” says our tech hound Ray Blanco.

“The most popular definition is that it’s pretty much anything that happens on the internet away from your on-site devices” — i.e., when your phone backs up your photos to a storage server, likely as not owned by one of the tech giants.

“But a better way to think about the cloud,” says Ray, “is the way businesses do: It’s on-demand computing. What that means is they provide instant tech infrastructure and scaling, depending on peak demands.

“The old way of launching a tech application was expensive. You’d need to rent space in a facility with super-fast internet service, power backups and lots of security; buy a few servers; and hire a specialist who could make the software and hardware play nicely. It was an expensive endeavor.

“And if you wanted to offer your service to customers globally, you’d needed to replicate all of that at locations around the world to ensure that they all saw usable speeds.”

Today, you can go to a “cloud” provider and rent that capability by the minute.

“Imagine an auction website,” says Ray, “that sees a burst of demand around noon each day when its auctions are about to end. In the old model, the company would need to buy enough server capacity to accommodate that peak demand, even though it sits idle for most of the day. But by moving to a cloud provider, they can scale up their capacity every day at 11 a.m. and scale back down at 1 p.m. and only pay for the time they’re using.

“What all that means is that companies have much lower barriers to entry to access cutting-edge technology than ever before.

Bottom line: “Contrary to what many think, cloud providers aren’t simply servers hosted offsite somewhere — the critical component to the cloud is that it combines scalable tech infrastructure with on-demand pricing and availability. For businesses, that’s a killer combination.”

The big players are Amazon’s AWS, Microsoft Azure and Google Cloud, with a combined 58% of the market. Ray likes the cloud business of one of those players so much that it’s the only one of the tech behemoths he recommends in his entry-level newsletter Technology Profits Confidential.

For the record: The original files of the source code for the World Wide Web sold for $5.4 million.

As Emily noted here Tuesday, Tim Berners-Lee’s creation was up for auction as a nonfungible token, or NFT. Sotheby’s has not identified the winning bidder.

Four months after we first took note of the NFT phenomenon, we’re still not sure what to make of it. We can see the appeal of a digitally unique “signed by the artist” NFT of Berners-Lee’s code… or Jack Dorsey’s first-ever tweet in 2006. But when the NBA is hawking video clips of random Kevin Durant dunks as supposedly invaluable collectibles? Meh… 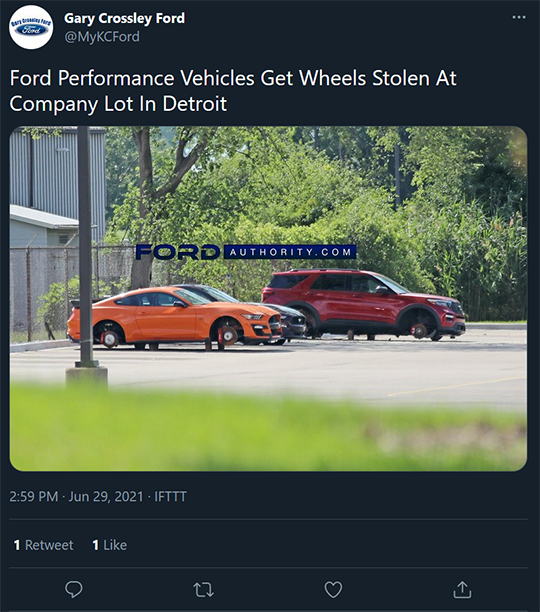 “With modern alarm systems capable of tracking a vehicle’s every movement, it’s just easier to steal their wheels and call it a day. The chances that these thieves will ever be caught is probably pretty low, as opposed to trying to get away with a bright orange GT500, after all.” Word…

“Gold output would expand considerably if gold were to be valued at $15,000 per ounce,” writes a reader responding to Jim Rickards’ gold musings here this week.

“As the price of gold increases, millions of tonnes of resource-grade material turns to a mineable reserve.

“Price will be the determinant (for the most part) if and when that move from resource (unprofitable) to reserve (profitable) categories happens. Somewhat self-regulating… but price determines the mineable (reserve) grade for any operational mine.”

The 5: Clearly you know a thing or two about the mining biz. And you’re absolutely right. Comes back to the old saying “The cure for high prices is high prices.”

P.S. Well, that was fast: “Treasury Secretary Janet Yellen announced Thursday that a group of 130 nations has agreed to a global minimum tax on corporations,” says CNBC, “part of a broader agreement to overhaul international tax rules.”

Apparently the governments of all the G20 countries, including China and India, are on board. It’s only a handful of low-tax meccas like Ireland and Barbados that are holding out.

The announcement was thin on details — like, you know, what the actual minimum rate would be. We’ll surely learn in the fullness of time.

Our Jim Rickards figured it would take a year or two for everything to come together, so the speed here is a little dizzying. You might want to reacquaint yourself with the “GloboTax” scenario that he spun here only a few days ago.