While many Americans were grilling and chilling on Independence Day, something weird happened in the mainstream business press.

Bloomberg and The Wall Street Journal both published warnings on Sunday about an obscure corner of the capital markets — obscure to everyday investors, anyway.

Both warnings were keyed to the outlook of a 42-year-old Hungarian native named Zoltan Pozsar — a veteran of the New York Fed and the Treasury Department, now a strategist with Credit Suisse.

Pozsar made his reputation two years ago when he predicted turbulence in the market for “repos,” or repurchase agreements — overnight loans that banks and hedge funds use to finance their day-to-day trading.

The repo market indeed seized up in September 2019, prompting the Federal Reserve to do something it hadn’t done for five years — buy Treasury debt and mortgage-backed securities from the banks, as it did in the years after the Panic of 2008. This was months before the pandemic and lockdowns put those purchases into overdrive.

“We are looking at a summer where large amounts of money, trillions, will change hands,” Pozsar tells the Journal now. “If you think about reserves as a deck of cards, that deck of cards will be reshuffled.”

At issue are financial instruments known as reverse repos — which are seeing a sudden upsurge in demand, thanks to a Fed decision last month. 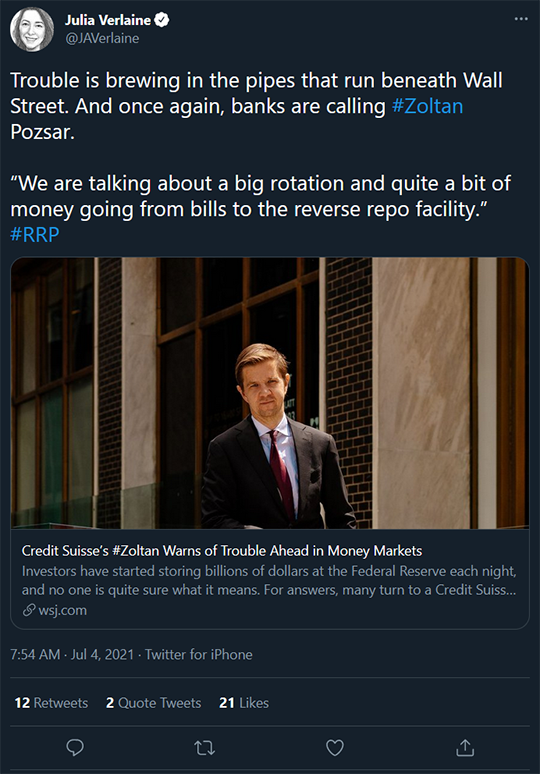 All of a sudden, nearly $1 trillion has accumulated in the Fed’s “reverse repo facility.”

So why the sudden shift?

Lost in the noise surrounding the Fed’s most recent policy announcement — that it might raise short-term interest rates two times, but not for another two years — was a reverse-repo surprise.

Up until last month, the Fed had paid zero interest to users of its reverse repo facility. Now it’s 0.05%.

Doesn’t sound like much, but it’s more than enough to prompt money market funds and banks to dump their holdings of pitifully low-yield Treasury bills and pile into reverse repos instead.

The consequences aren’t necessarily easy to tease out. Bloomberg’s Pozsar profile anticipates “billions of dollars worth of bills that the market will need to absorb, thereby draining reserves from the banking system… That could lead to market weirdness as banks retool their balance sheets.”

The Journal article is equally opaque, contemplating “the kind of shift that could spark unexpected volatility in unusual places.”

But even the so-called experts can’t say with certainty where this is all going. “The concern is that this is the tip of the iceberg and we can’t see the rest of it,” says Joshua Younger, who runs interest-rate derivatives strategy at JPMorgan Chase.

“The more money that ends up back at the facility, the greater the overall excess and the greater risk of that excess being put to use in ways that could end up being destabilizing,” he tells the Journal.

“Destabilizing” is never a word you want to hear in connection with financial markets. Especially when the rush into reverse repos coincides with “ongoing quantitative easing and a looming debt ceiling deadline,” says the Bloomberg piece.

Ah yes, the debt ceiling. We mentioned that last Thursday. Congress is now on a two-week break. Once they resume their work, they’ll have exactly 11 days to come to terms on lifting the ceiling. Otherwise the ceiling comes into force and Uncle Sam starts running the risk of default — amid an already “destabilizing” backdrop in the markets.

Yes, we have a peace-of-mind solution in the works. We’re still tweaking the details, but we’ll roll it out next week. We don’t expect things to turn dicey before then. Watch this space…

So much for last week’s record highs — the safety trade is on as a new week begins.

Hot money is flowing into longer-term Treasuries, pushing prices up and yields down. The yield on a 10-year T-note has plunged to 1.36%, the lowest since late February. Gold is benefiting, too — up $12 and back above $1,800. Silver, however, is taking a rest after a big run-up on Friday — down a quarter or so to $26.24.

Crude popped over the weekend as production talks deadlocked among the OPEC nations and other major oil producers… but now the price is pulling back sharply, a barrel of West Texas Intermediate down $1.56 to $73.60.

At the risk of beating a dead horse, the “stress tests” on the banks were a joke.

We said as much last month, but our investment banking veteran Nomi Prins affirms it. “The Federal Reserve announced that the 23 banks that had undergone so-called ‘stress tests’ to determine whether they had enough capital on hand in case of a crisis sailed through with flying colors.

“The reality is that the biggest banks are very well-positioned to pass any stress tests because they’ve had a steady diet of dark money since the financial crisis of 2008, which was amplified after the pandemic crisis.”

“The Fed’s total amount of assets purchased has topped $8 trillion in exchange for injecting that amount of dark money into the financial and banking system. The Fed subsequently green-lighted the path for banks to raise their dividends and buy back their own shares again, which led to an announcement of $20 billion worth of buybacks for Wall Street.

“The sector sold off on the news (having rallied before the announcement) but we expect that sell-off to be short-lived and dark money combined with passed stress tests to provoke more of a rally in the sector.”

Take a good look at this chart depicting sales of U.S. Silver Eagles from the U.S. Mint… 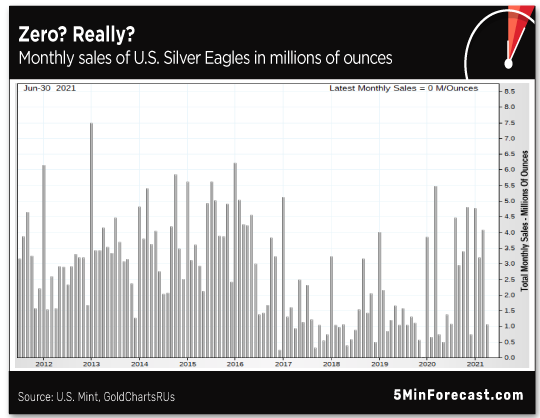 Notice that nothing went out the door in May or June of this year.

In late May, the Mint issued an email to its dealer network saying it’s having trouble meeting demand thanks to a “global silver shortage.”

A few days later, on June 4, the Mint issued a correction of sorts: “The United States Mint… is being impacted by silver blank shortages among its suppliers. The demand for many of our bullion and numismatic products is at record heights and increasingly outpacing the supply of silver blanks available through our suppliers.”

“That’s an explanation that fails to explain,” quips Byron King, our observer of all things natural-resource related.

“That is, the U.S. Mint is at the top of the list for silver supplies from refiners. And yet it’s telling the world that it can’t obtain sufficient metal to meet demand.”

Yes, you can still buy silver — coins from other government mints, coins from private mints, pre-1965 “junk silver” coins and so on. “But it’s pricey, and getting pricier, especially the ‘markups’ above the official spot price,” says Byron.

“The main takeaway here is that the Mint shortage of silver reflects the shadow of a new cycle of inflation that has already begun.”

Perhaps it will retreat during the second half of 2021, as our Jim Rickards says, only to surge again in 2022. But whatever the case, it’s not going away. We’ll help you plan accordingly.

Speaking of rising prices… have you bought propane lately?

Propane futures at hubs in the Plains states are hovering near a dollar a gallon — double the summertime levels of last year and the year before.

Propane inventories are now 15% below the five-year average. “As these dynamics continue, the U.S. market would project to hit dangerously low propane inventories,” warn analysts from the Raymond James firm. Yikes…

When all the world is dunking on your corporate name change, the only logical response is to… double down.

Or so it goes for the Scottish asset manager formerly known as “Standard Life Aberdeen.”

In April, after selling its Standard Life brand to another firm, the company announced plans to rebrand as “Abrdn.”

“Our new brand Abrdn builds on our heritage and is modern, dynamic and, most importantly, engaging,” said CEO Stephen Bird, reciting all the tiresome corporate buzzwords before taking pains to point out it’s pronounced “Aberdeen.”

Fast-forward to now and Bird has turned it up to 11: “Abrdn” has been reformulated as “abrdn”… 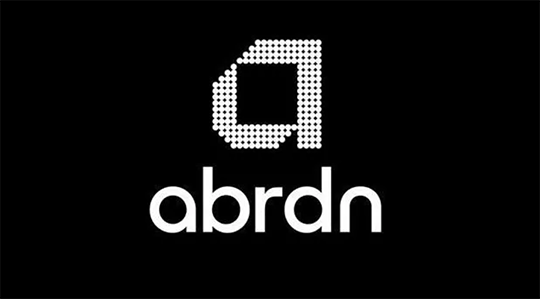 The capital “A” was jettisoned “following positive feedback on a lower-case name from clients and employees,” per a Reuters story — citing Bird, of course.

Still undisclosed: how much “abrdn” paid the “brand consultancy” firm Wolff Olins for this farce — surely the dumbest corporate rebrand since Tribune Publishing decided to call itself “tronc” for a while.

“Dave, thanks for that outstanding restatement of the case for press freedom,” a reader writes after we again made the case on Friday to free Julian Assange.

“Borderline seditious, indeed, by the standard Beltway definition: that which undermines the rotten foundations of corporate power and deep-state collectivism in this degenerate republic.

The 5: We’re heartened to see we’re not the only ones who’ve noticed the media blackout of the story that Assange’s indictment appears to be based on false testimony from a convicted embezzler and child molester.

“As of Friday, July 2, there has been literally zero coverage of it in corporate media,” writes Alan MacLeod of the lefty media watchdog Fairness and Accuracy in Reporting; “not one word in The New York Times, Washington Post, CNN, NBC News, Fox News or NPR.

“A search online for either ‘Assange’ or ‘Thordarson’ will elicit zero relevant articles from establishment sources, either U.S. or elsewhere in the Anglosphere, even in tech-focused platforms like The Verge, Wired or Gizmodo.”

“The way the mass media have begun simply ignoring major news stories that are inconvenient for the powerful, across not just some but all major news outlets, is extremely disturbing. It means anytime there’s an inconvenient revelation, mainstream news institutions will just pretend it doesn’t exist.

“Seriously think about what this means for a moment. This is telling whistleblowers and investigative journalists that no matter how hard they work or how much danger they put themselves in to get critical information out to the public, the public will never find out about it, because all mainstream news outlets will unify around blacking it out.”

If a tree falls in the forest, right?