The five biggest publicly traded companies in the United States all report their earnings this week.

Facebook, Amazon, Alphabet (Google), Microsoft, Apple — they’ll all go through the quarterly ritual. The biggest of them all, Apple — with a market cap approaching $2.5 trillion — reports after the closing bell tomorrow.

Apple is the biggest of the bunch, yes… but also among the weakest. So far this year, it hasn’t even kept pace with the boring ol’ S&P 500. 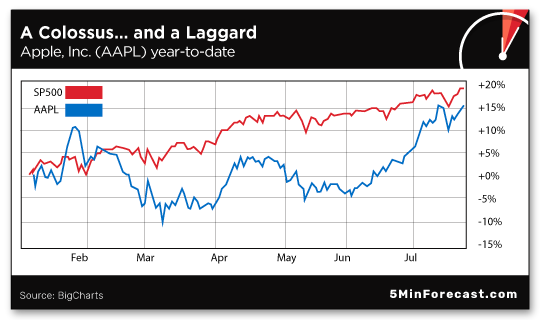 Might as well keep your money in an index fund, right?

Not so fast. Our retirement specialist Zach Scheidt revisited his case for AAPL here on Friday — a case he’s made in The 5 since late 2015. Yes, it’s trading at 27 times expected earnings. “But given the consistency with which AAPL grows earnings, the company’s growing dividend and the stability in Apple’s overall business, shares now look very attractive.”

“Apple’s the biggest dog in the markets, and this year’s no exception,” affirms our tech maven Ray Blanco, serving up his own perspective this morning.

“Apple crushed its own record in iPhone sales last quarter and beat sales estimates by over $10 billion. That’s billion with a ‘B.’”

Pandemic? Lockdowns? AAPL’s share price has been more than resilient — up 50% from this time a year ago, even if it’s spent much of 2021 trading sideways.

“Apple also has big plans in the making, under the radar,“ Ray goes on.

“We all know that when Apple releases a product the development leading up to it is incredibly secretive. But when they do finally go through with it, it’s of the best quality on the market.

“The iPhone is obviously their best product, with a new version coming out this year. But think of everything else they’ve released — AirPods, the Apple Watch and the Apple TV have all been huge successes.

“And if the rumors out there are correct… their next product could replace the iPhone as Apple’s No. 1 revenue maker.”

You read that right. It’s a story the mainstream hasn’t caught on to — yet. That’s why Ray says if you act now, you’ll have the early-mover advantage. Click here and he’ll show exactly what he means.

“Focus on percentages, NOT points!” says our floor-trading veteran Alan Knuckman, with words of wisdom as a new week begins in the markets.

“Weekly market momentum remains a powerful force,” he tells us, “and tech is still leading the way now on most days.”

Indeed as we check our screens, the tech-heavy Nasdaq is flat on the day, while the S&P 500 and the Dow are slightly in the red.

And if you’re looking for an undeniably bullish sign, it’s found in the “guidance” companies are providing as they deliver their quarterly numbers.

Revenues and earnings tell you what’s already happened. Guidance is what management is signaling about the future. Which brings us to the following chart flagged for us by the aforementioned Zach Scheidt… 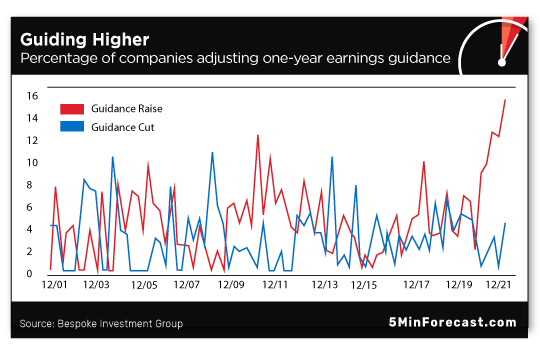 “This chart shows the percentage of companies that have been increasing guidance for the year ahead,” says Zach. “In other words, these companies are telling investors that profits will be even higher than they previously expected.

“As you can see, more companies are raising guidance than at any time in the past year — and this is true by a very wide margin! The only other time period that came anywhere close to this level of strong management guidance was shortly after the 2008 financial crisis.”

Which coincided with the start of an epic bull market. Just sayin’.

Even with the major indexes hovering near records, “this one statistic gives me a lot of confidence,” says Zach, “for today’s market.”

However, as a public service, we’re compelled to remind you the stock market and the economy are not the same thing.

In case you missed the tedious Sunday morning talk shows, one of them actually made some news yesterday… 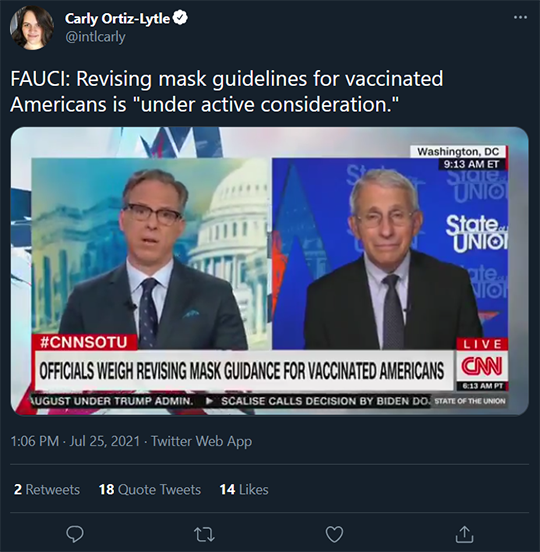 “The first in a return to widespread economic restrictions?” wonders Jim Bianco, head of the institutional research outfit that bears his name.

Mr. Bianco reminds us on Twitter that government officials react in knee-jerk fashion to raw case counts — not hospitalizations, not deaths. Doesn’t matter if the bulk of “Delta” cases are no worse than a bad cold. “Politicians want to appear to be ‘in control’ by ‘doing something!’”

Silly us for thinking the powers that be had moved beyond the mask madness. But if they’re really going to urge the vaccinated to mask up again, even under limited circumstances… that’s not much of an incentive for the unvaccinated to get jabbed, is it?

Meanwhile, the latest housing-market number has shocked to the downside.

Sales of new single-family homes as calculated by the Commerce Department tumbled 6.6% from May to June. Whoops, the “expert consensus” among dozens of economists polled by Econoday called for a 9.5% jump.

The year-over-year drop works out to 19.4%. As we said last week, high prices are clearly becoming an issue — even with a 30-year fixed mortgage below 2.8%.

As we mentioned two weeks ago, Amazon and Walmart are trying to work around the global supply-chain snags by booking cargo space for holiday goods three months earlier than usual.

That heads-up is now being echoed by BIMCO, the global trade organization for shipping. “U.S. consumers have been excellent at spending money,” says its analyst Peter Sand. Shippers best “brace for an extended peak season. Front-load cargo if at all possible.”

In some cases, shippers are resorting to air cargo — even though it’s much more expensive, reports The Loadstar supply-chain website. “Shipper Kent Andersen, president of Tsune America, explained that his normal supply chain flow from Japan to the U.S. takes six–seven weeks but had recently hit as much as four months.”

Still, what if the pandemic isn’t the sole cause — or even the main cause — of the shipping debacle that plagues the world?

It was in September 2019 that our Zach Scheidt advised us about impending new pollution regulations from the International Maritime Organization — an arm of the United Nations. “Policymakers from over 172 countries — including the United States — agreed to abide by new rules,” he explained.

No longer would most international shipping be able to rely on high-sulfur bunker fuel. Complying with the new rules would mean either 1) using cleaner but more costly fuels; 2) retrofitting ships with costly “scrubbers” so the high-sulfur fuel could meet the new emissions standards; 3) sending old ships to the scrapyard and replacing them with costly new models.

Note that the word “costly” turns up in all three of those alternatives.

Note also that the new rules took effect Jan. 1, 2020 — only weeks before the pandemic and lockdowns turned the world inside-out.

The new fuel rules were certain to cause disruption in 2020. But “that impact was shielded by the pandemic because there was less demand for ships,” says Eoin Treacy of the London-based research firm Fuller Treacy Money.

Now comes the whirlwind. “We have fewer ships because a lot of them were junked and we have increasing demand,” Treacy told the Financial Sense podcast this weekend. “And it takes years to build new ships. And it takes a lot of investment. And it’s an extraordinarily volatile business. So they have difficulty raising money.

“So we’re going to have to see higher prices sustained for a prolonged period before they get the financing to go off and build new ships.”

In other words, even after the supply-chain snags are worked out into some sort of “new normal,” shipping costs are certain to remain elevated — costs likely to be passed on to the consumer, sooner or later. Consider yourself on notice.

It’s the time of year when we typically decry lemonade-stand law enforcement… except that today, we have good news to report.

From the text of a bill just signed into law by Illinois Gov. J.B. Pritzker: “Notwithstanding any other provision of law, the Department of Public Health, the health department of a unit of local government or a public health district may not regulate the sale of lemonade or nonalcoholic drinks or mixed beverages by a person under the age of 16.”

Informally, the legislation is known as “Hayli’s Law” — after Hayli Martenez of Kankakee was busted in 2017 at the age of 9 for selling lemonade to raise money for her college fund.

“It wasn’t about the lemonade,” her mom Iva tells Illinois Policy. “It was about being able to take what you have and make it work for you.” 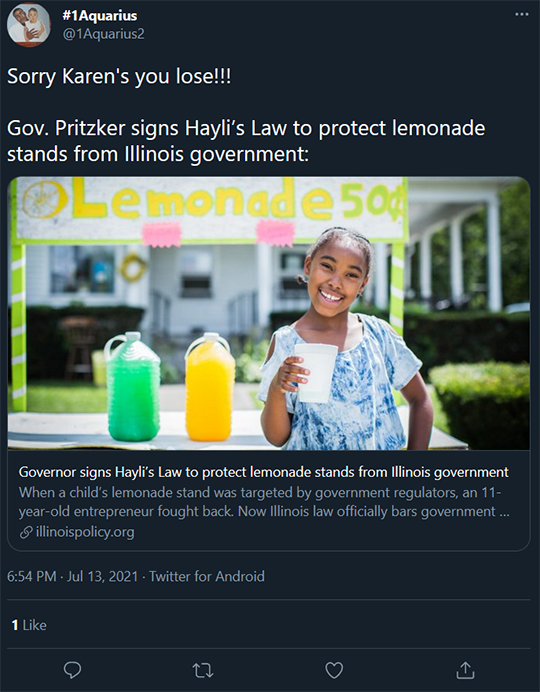 Meanwhile, New Hampshire lawmakers have passed a similar bill applying to kids under 14 — though not without some squawking. “Some state legislators,” writes Ella Lubell at Reason, “thought that the bill was unnecessary, as there has never been a publicized incident of an authority shuttering an unlicensed lemonade stand in the past.”

Maybe not in New Hampshire, but did anyone seriously think it wasn’t just a matter of time? Anyway, the bill awaits Gov. Chris Sununu’s signature.

To the mailbag: “Jim Rickards seems to suggest the government just waves a hand and voila! the dollar weakens,” writes one of our regulars.

“The Fed has been trying to achieve a weak dollar and obviously failed for reasons you outlined. Printing more money and lowering interest rates don’t do it, so what does Jim think the Biden administration can or will do? Wreck the economy even more?”

Seriously, though, it’s that whole race-to-the-bottom thing. Not every country can devalue at once. So while Europe, the U.K. and Japan are generally weakening their currencies relative to the dollar at the moment — whether they mean to or not — America’s next turn will come sooner or later.

In Jim’s formulation, prior currency wars lasted 15–20 years. The current one began in 2010. (Our most recent summation of the history is here.) Plenty of time for everybody to take their turn, more than once…

“I was thinking about why China finally enforced its anti-Bitcoin laws, and the following occurred to me,” a reader writes.

“One definite goal for China in the short to medium term is the de-dollarization of the world. The yuan, physical or digital, is not going to displace the dollar anytime soon.

“However, there is another currency waiting in the wings that is gaining popular support. It also does not require any additional infrastructure to implement and is superior to the dollar in most ways. I refer to Bitcoin, of course.

“But Bitcoin’s strength is decentralization, which was somewhat limited by 65% of miners being in China. By kicking them out, China strengthened Bitcoin at small cost to themselves.

“While I suspect that China will eventually try to supplant or kill Bitcoin via its centralized digital currency, in the interim it serves their de-dollarization purposes to strengthen it.

The 5: Could be. Then again, we’re leery of attributing 11-dimensional chess skills to any government leaders, be they Chinese or American or anyone else. Heh…