Their recommendation? “Vaccinated people [should] wear masks in indoor, public settings if they are in parts of the U.S. with substantial to high transmission,” says an article at Axios.

To see where your county falls, behold… 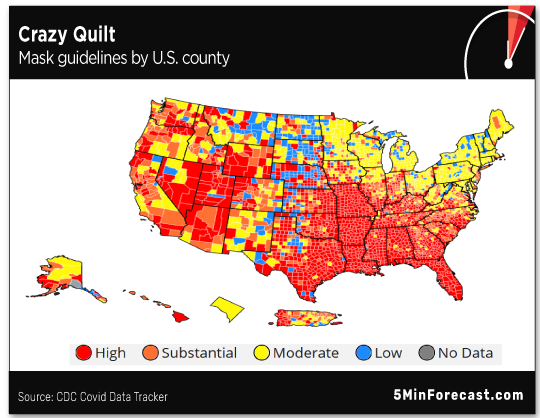 Of course, the situation is changing by the minute…

The Delta variant is “considerably more contagious than the original version of the virus,” says our science-and-technology maven Ray Blanco.

He cites information coming out of Israel, which “was one of the first countries to really get a high percentage of the population vaccinated.” According to The Wall Street Journal, about 80% of Israeli adults have been vaccinated, by and large with Pfizer’s vaccine.

“[Israel] is a small country… with a few million people. Logistically, you’re not dealing with a situation like the United States. So they were able to move really fast.”

So far, the vaccine seems to offer “a huge amount of protection,” Ray says. “The odds of [COVID] making you really sick are greatly reduced over an unvaccinated person.”

But on Monday, over 2,000 Israelis tested positive for COVID — a number not seen since March. Among that number, there are now 138 hospitalized, twice the number last week.

“Israel began administering a third [Pfizer] booster shot two weeks ago to those [over age 60] with severely compromised immune systems,” says an article at The Times of Israel. This is in response to research that seems to indicate the Pfizer vaccine’s efficacy wanes over time.

Researcher Dr. Yotam Shenhar says: “We looked at tens of thousands of people tested in the month of June, alongside data on how long had passed since their second shot, and found that those vaccinated early were more likely to test positive.”

The article notes: “Data released by the Health Ministry last week suggested that people vaccinated in January have just 16% protection against infection now, while in those vaccinated in April, the effectiveness was at 75%.”

An important caveat? British researchers believe the “Israeli studies may be overstating the case” while not using an unvaccinated sample set for comparison.

Here stateside, Pfizer is requesting “U.S. emergency authorization for a third dose of its vaccine, which it has said may help people maintain higher levels of protection,” Reuters reports.

“But concerns of shortages and supply constraints have also crept into the picture,” he says. “And despite another incredible quarter, AAPL shares dropped following its earnings announcement.” They’re nominally in the red at the time of writing.

“Microsoft is in the same boat,” Greg continues. “The company beat on top/bottom lines and guided higher. But supply chain issues caught some investors’ attention. The stock dropped initially after reporting late Tuesday, then rallied. It’s up modestly right now.

“Finally, in the land of giant tech stocks, we have Alphabet (Google). Once again, another big beat,” says Greg. “After trending lower all day, Google shares popped after the announcement.” Shares are up about 1% so far today.

Commodities? Oil is up 66 cents to $72.28 for a barrel of West Texas Intermediate, but precious metals gold and silver are both in the red: The yellow metal’s a hair under $1,800 per ounce and silver’s just under $25.

We’ll see which way the wind blows tomorrow after the FOMC meeting this afternoon… More on that tomorrow.

Peruse the chart of U.S. prices over the past year… 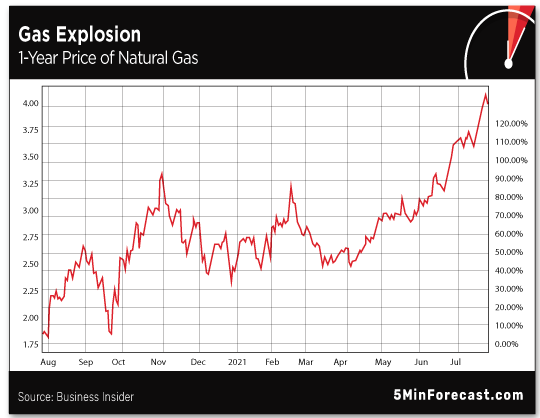 “Prices have more than doubled in 12 months,” says Byron, “and there’s plenty going on behind this chart.

“In general, the economy has strengthened in the past six months as COVID lockdowns abated. More people are doing more things, using more electric power. And of course, in terms of gas consumption we had the winter heating season through about April.

“One primary reason for the recent price kick for gas,” says Byron, “a nationwide heat wave.

“If you’ve followed the news, you know about record-setting temps in the Pacific Northwest, high temps and drought in the far West and hot temps… as far northeast as New England. 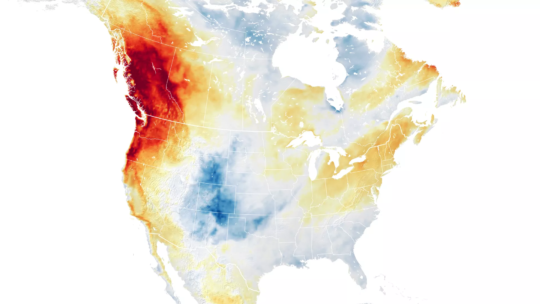 “It’s no surprise that people across the U.S. are running air conditioners, which require electricity,” Byron says. “So much, in fact, that demand is well over and above normal baseload, even for a typical June.

“Now the discussion becomes industrial,” Byron notes. “Over the past 15 years, much of the additional electric power capacity added to the U.S. grid has come from gas-fired turbine systems.

“Much of the recently added electric power capacity in the U.S. has come from building plants to burn natural gas to spin turbines.

“Here’s a long-term chart that covers the last 70 years, courtesy of the U.S. Energy Information Administration (EIA). It speaks volumes… 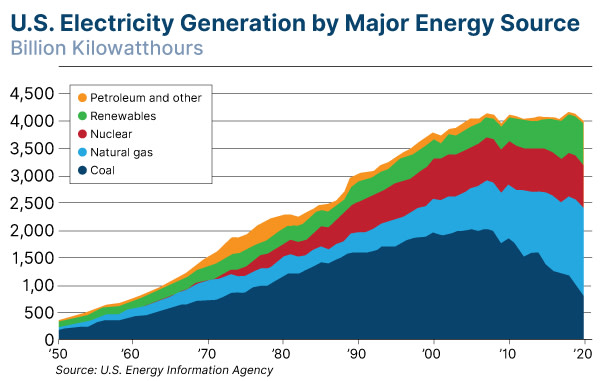 “Over the past 15 years, [coal] has lost significant market share,” Byron points out. “Mainly… due to the heavy carbon load (soot, ash and carbon dioxide) released by burning it. Coal tends to be a dirty fuel, and it’s expensive to clean up the mess.

“In the early 2010s, much of the slack from closing American coal plants was taken up by natural gas,” he says. “The country was fortunate in terms of energy supply because more and more gas showed up at wellheads via fracking.

“Natural gas is still the go-to method to generate large amounts of high-reliability electricity over and above the continuous baseload that keeps the country humming,” Byron says.

“While U.S. utilities are burning gas for power this summer, they aren’t storing it up for the coming winter,” he adds. “According to the EIA, gas storage is down over 15% from where it ought to be at this point in the year.

“Even that statistic doesn’t account for the current gas usage spike due to hot weather of the past month. I

“In other words, things will get worse as summer progresses.

“This is not just a U.S. situation with natural gas,” says Byron, “Gas supplies are tight from Europe to China and wherever else in the world pipes flow and LNG sails and discharges.

“Those tight global gas supplies mean relatively high prices now, both domestically and internationally, and they should move even higher in the months ahead.

“The takeaway is that the current pricing strength for natural gas isn’t a temporary phenomenon,” Byron says. “Expect a tight gas market in the fall and moving into 2022. This will place a firm price floor under [natural] gas.”

For investors? “There are many ways to play [natural gas], ranging from large gas-producing companies to pipeline companies to well-run utilities to LNG shipping companies,” Bryon concludes.

“Unless you want to get into stock-picking, my view is to find a solid fund that covers the natural gas sector and offers professional management.”

A hashtag is floating around the Twittersphere: #GetCoinMoving. Just don’t call it a shortage!

“The original cause of the 2020 coin shortage was that production at the United States Mint was slowed due to the pandemic, with the ‘cumulative mintage’ down to just over 4 billion, as opposed to 5.07 billion the previous year,” says an article at The National Interest.

“The other problem was that early in the pandemic, very few coins were circulating in the economy, thanks to stay-at-home orders and fewer people going out and spending money.” Not to mention, no one wanted to handle “germy” coins…

“Then once the economy began to reopen, many businesses exhausted their coin inventories.” 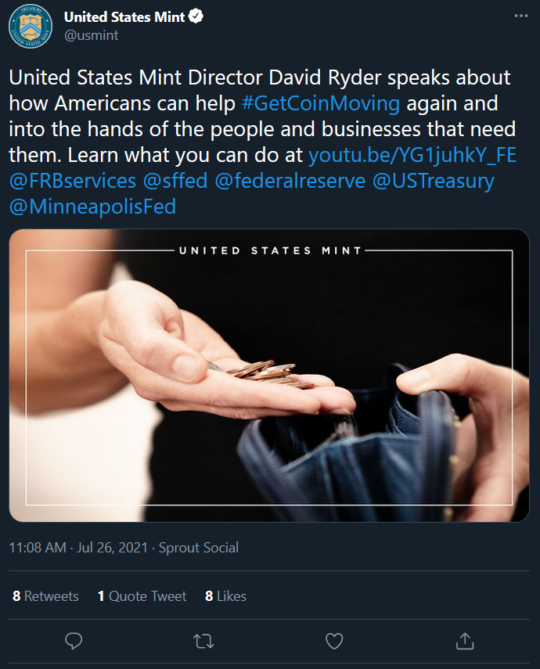 Recommendations for circulating coins: “Spend existing coins, deposit them at banks and other financial institutions, redeem coins at kiosks and use the #getcoinmoving hashtag.”

Just don’t be that guy, holding up the line…

One of these things is not like the other: For the first time in 50 years, Campbell’s soup cans are getting a facelift… 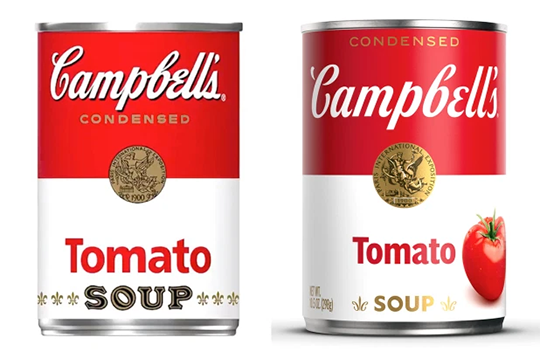 Courtesy: Campbell’s Soup
Can you spot the updated version? (Psst… It’s the one on the right.)

“Campbell’s is eliminating the shadow and slightly changing its font,” the New York Post says, “which is based on founder Joseph A. Campbell’s signature.

“Campbell’s fans can also pick out subtler elements, such as a more pronounced C in the fleurs-de-lis and a slanted O in the word ‘soup’ — which pay tribute to the letters from the first label, made in 1898.”

Campbell’s classic soup flavors — tomato, cream of chicken, cream of mushroom and chicken noodle — will all get redesigned labels; they’re coming to a store shelf near you (provided there are no supply-chain hiccups).

The real question: Who will be the next Andy Warhol to immortalize the updated soup can?

“I like your take on the Branson/Bezos trips into space,” a reader writes.

“It will take a while (about 30 years, if air-travel history is a guide), and even if I don’t get to see it in my lifetime, the day of civilian space travel may yet become a reality.

“Who knows? Maybe the first ‘regular Joes’ to make it into space will be lottery winners. Win, lose or draw, the day of civilian space travel will come to pass sometime in our lifetimes.”

Maybe so… As for Branson and Bezos in space, one clever Twitter user offered this counternarrative:

You all take care… We’ll be back at it tomorrow.