The Truth About “Wealthy Tax-Dodgers”

A decade after we started busting the myth, the myth persists: “Wealthy People Are Renouncing American Citizenship,” says a headline at Axios, the news site launched by a handful of Politico veterans in 2017.

We’re not even sure what “news” Axios is trying to convey. Here’s the lead to its story: “The number of Americans who renounced their citizenship in favor of a foreign country hit an all-time high in 2020: 6,707, a 237% increase over 2019.”

Yeah, not news. Those numbers were released six months ago. We mentioned them at the time.

That said, the Treasury Department updated the numbers last week to reflect the first six months of 2021… 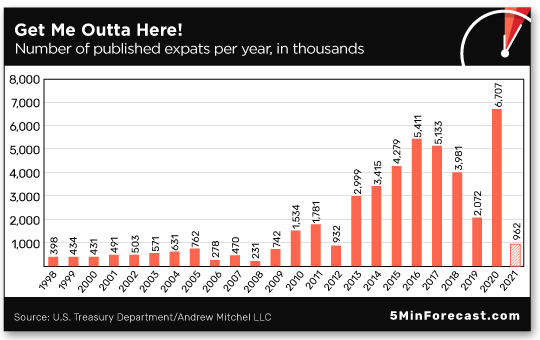 Don’t read too much into the sky-high 2020 total and the comparatively teensy number so far this year: Much of the 2020 figure is likely a paperwork backlog from 2019 and earlier. Meanwhile, the pandemic has shut down many U.S. embassies and consulates — which makes the logistics of expatriation even more challenging than they were before March 2020.

Anyway, here’s what really gets our goat…

“The people who flee tend to be ultra-wealthy, and many of them are seeking to reduce their tax burden,” the story claims.

Let’s acknowledge the article gets a couple of things right: The United States is one of only two countries on the face of the Earth that taxes your income no matter where you earned it. (The other is the northern African state of Eritrea.)

In addition, the expatriation numbers indeed started growing after passage of the Foreign Account Tax Compliance Act (FATCA) of 2010.

The myth of expatriation as a tool used mostly by “the tax-dodging wealthy” grew from there — fueled by well-heeled Americans who gave up their citizenship in the early 2010s like Tina Turner and Facebook co-founder Eduardo Saverin.

But as we’ve documented the whole time, the burden of FATCA falls hardest on ordinary folks with ordinary incomes who possess U.S. citizenship and live overseas.

After passage of FATCA, many foreign banks closed the accounts of their U.S. customers; compliance with IRS reporting requirements was just too onerous. In addition, a typical American overseas ponies up $2,000 a year to lawyers and accountants just to make sure they don’t run afoul of the IRS’ byzantine rules. (And that’s a 2013 estimate — wanna bet it’s higher now?)

Take Daniel Kuettel, a software developer living near Zurich who gave up his U.S. citizenship in 2012. “It was a really difficult decision,” he told The Wall Street Journal. But he wanted a mortgage, and formal expatriation was the only way a Swiss bank would give him one.

Or take Ruth Anne Freeborn — born in Oklahoma, married to a Canadian and living in Ontario since the early ’80s.

“The rich can afford expensive tax attorneys. The poor and the middle class cannot,” Freeborn told McClatchy Newspapers in 2013.

Under FATCA, her husband — the sole breadwinner, earning $51,000 a year — had to share his financial data with the U.S. government. “My decision was either to protect my Canadian spouse and child from this overreach, or I could relinquish my U.S. citizenship.” She chose the latter.

Some people caught in FATCA’s snare are “accidental Americans” — people from other countries, usually Canada, who were born while their parents happened to be in the United States. They’ll go for decades unaware of their U.S. citizenship until the IRS sends a nastygram insisting they owe years of back taxes.

In 2014, ABC News told the story of a Canadian who came to visit the United States for the first time, or so he thought. Imagine his shock when he was told “he needed an American passport in order to re-enter the United States” because he was born here. He was given a choice of paying five years in back taxes, or renouncing his U.S. citizenship. He too chose the latter.

We’ve cited all of these stories ourselves over the years. How hard would it have been for the Axios reporter to dig them up and convey more nuance to her story? But no. “A lot of people who take this drastic step are tech zillionaires,” it says: “Eric Schmidt, the former Alphabet CEO, has applied to become a citizen of Cyprus.”

Whatever. We give up…

To the markets, where the Nasdaq might notch a record at day’s end — maybe even top 15,000.

Among the big movers is the brokerage app Robinhood, which went public a week ago today under the ticker HOOD. The first few days of trading were a bummer. But then options on HOOD started trading yesterday and the shares closed at $70.39 — 85% over their pre-IPO level. Goes to show you where the Robinhoodies’ heads are at, right? At last check, the shares have pulled back this morning to just below $61.

First-time unemployment claims are back below 400,000 in the week gone by. But the longer-term picture is souring: Look how the number has flatlined since roughly Memorial Day… 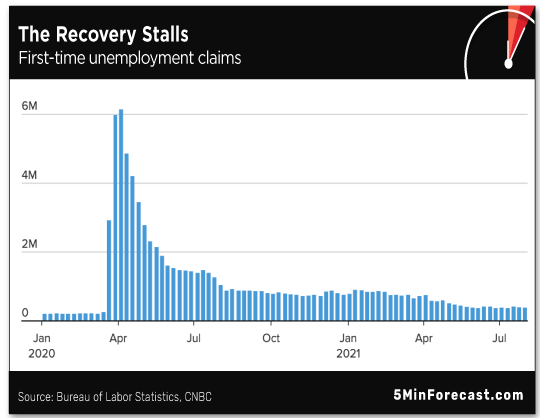 Tomorrow brings the Labor Department’s July jobs report. The “expert consensus” is looking for 900,000 new (or revived) jobs. A number that disappoints could tank the market because it would affirm the “recovery” narrative is losing steam. Or it could propel the market higher on the assumption the Federal Reserve will keep mashing the monetary gas pedal. Fun times, huh?

Supply-chain snag of the day: In pockets of the country, the giant institutional food supplier Sysco has halted deliveries to some restaurants and stopped taking new orders.

Near as we can tell, the trouble surfaced first in Wichita, Kansas: “Standard practice is for restaurants to order food by 2 p.m. Sunday to have it delivered Monday morning. The restaurants found out they couldn’t place their orders on Sunday, so they got less than 24 hours notice,” reports The Wichita Eagle.

Monday brought a run on Sam’s Club, according to one Wichita restaurant owner. Another says Sysco is blaming the trouble on the same phenomenon facing many restaurants — staffing shortages. “They can’t get drivers, they have problems with their warehouse people.” Under those circumstances, health care and education customers get priority.

Scanning Google News, it’s hard to get a handle on the scale of the problem… but the geographic distribution is widespread.

Missed deliveries are reported from California’s San Joaquin Valley all the way to your editor’s Upper Peninsula of Michigan — where one restaurant owner says he’s been told he’ll be cut off till mid-September.

And perhaps the stoppages go back longer than this week: In Stratton, Maine, we see Sysco dropped one small restaurant customer altogether three weeks ago.

Which brings us back to Kansas. “A small restaurant like me, I’m going to be the last man on the totem pole, compared to Applebee’s or Texas Roadhouse or anything else on these big national contracts these guys have,” restaurant owner Vance Davis tells The Wichita Eagle.

“Corporate stores are going to be better off in some cases than mom and pop stores… When you’re in business like that you don’t want to lose your national accounts, so the smaller accounts kind of get left in the wake.”

Great moments in corporate branding: Behold the name of a new amusement park just opened by an Israeli businessman.

(You might have to think about it for a moment. I know I did.) 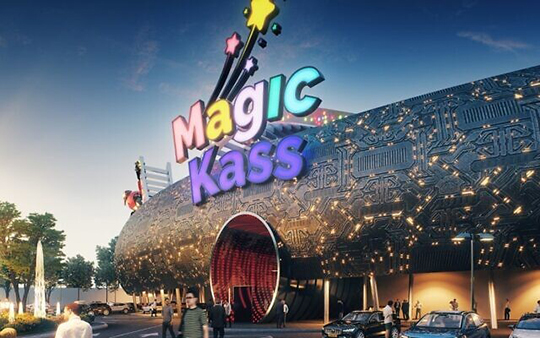 The $156 million “Magic Kass” complex, located in the West Bank settlement of Mishor Adumim, is in fact named after the developer behind it — Hanoch Kass.

A brief story at The Times of Israel refers to a “new (unfortunately named) amusement park.” But as a commenter at the Fark website points out, “There’s nothing unfortunate about it; that was entirely deliberate and blatantly obvious.”

“The very nature of crypto is its weakness and likely will be its demise,” a reader writes in reply to our main topic yesterday.

“Its only form is in electrons, and the government controls its means of transmission.

“The moment crypto becomes a serious threat to the official financial channels or anything beyond another speculation to be milked by Wall Street, it will be regulated, replaced with FedCoin or simply outlawed.

The 5: Maybe. But that gets us back to a related crypto topic from earlier this week — the new IRS reporting requirements for crypto exchanges.

How can the feds track crypto that’s been transferred to cold-storage wallets — the equivalent of old-fashioned cash in a mattress?

Meanwhile, if there’s no central repository for the “smart contracts” made possible by decentralized finance, how can centralized authorities exert control?

Then again, the powers that be succeeded in shutting down the music-sharing service Napster two decades ago… and Napster relied on a decentralized peer-to-peer concept that (in our admittedly limited understanding) is sorta analogous to DeFi.

See how we’re arguing with ourselves here? That means it’s still early days.

And we freely admit: Our cheering-on of DeFi stems from a fair amount of confirmation bias. That is we want to see DeFi succeed in smashing the edifice of the current power structures of Big Finance, if in fact that’s what it promises.

Yes, we recognize it was similar sentiments that animated the Bitcoin evangelists back around, say, 2013. While Bitcoin hasn’t destroyed central banking, it does seem to have blazed a trail for something promising…

“Right on!” a reader writes after our remarks yesterday about military spending, citing Dwight Eisenhower’s “Cross of Iron” speech.

“The 5’s closing comment was right on and goes to the heart of what America should do.”

The 5: It comes back to what James Madison said in 1795, and forgive us if you’ve seen us cite it before, but it can’t be said often enough…

“Of all the enemies to public liberty war is, perhaps, the most to be dreaded, because it comprises and develops the germ of every other.

“War is the parent of armies; from these proceed debts and taxes; and armies, and debts, and taxes are the known instruments for bringing the many under the domination of the few.

“In war, too, the discretionary power of the Executive is extended; its influence in dealing out offices, honors, and emoluments is multiplied; and all the means of seducing the minds, are added to those of subduing the force, of the people. The same malignant aspect in republicanism may be traced in the inequality of fortunes, and the opportunities of fraud, growing out of a state of war, and in the degeneracy of manners and of morals, engendered by both.

“No nation could preserve its freedom in the midst of continual warfare.”

Or even continual mobilization for war — which has been the American experience ever since passage of the National Security Act of 1947.